Washington: The US Justice Department has scheduled the first federal execution of a woman in almost 70 years, setting a December 8 date to put to death Lisa Montgomery, convicted of a 2004 murder.

Montgomery, who was found guilty of strangling a pregnant woman in Missouri, will be executed by lethal injection the department said in a statement. 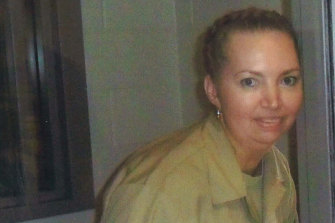 Lisa Montgomery, who is scheduled to be executed by lethal injection on December 8, was convicted of fatally strangling a pregnant woman.Credit:AP

The last woman to be executed by the US government was Bonnie Heady, who was put to death in a gas chamber in Missouri in 1953, according to the Death Penalty Information Center.

The justice department on Friday also scheduled a December 10 execution for Brandon Bernard, who with his accomplices murdered two youth ministers in 1999.

The two executions will be the eighth and ninth the federal government has carried out in 2020.

The Trump administration ended an informal 17-year-hiatus in federal executions in July, after announcing last year that the Bureau of Prisons was switching to a new single-drug protocol for lethal injections, from a three-drug combination it last used in 2003.

In 2007, a US District Court sentenced Montgomery to death after finding her guilty of a federal kidnapping resulting in death.

Montgomery fatally strangled a pregnant woman and then sliced open her body, and kidnapped her unborn baby, according to federal authorities.

On Friday, Attorney General William P. Barr said Montgomery was one of two inmates scheduled to be executed. Barr said he directed the head of the Federal Bureau of Prisons to carry out the death penalty.

Montgomery is the only woman on the federal government's death row.

In October 2007, a federal jury found Montgomery guilty of one count of kidnapping resulting in death. Federal prosecutors said in December 2004, Montgomery killed Bobbie Jo Stinnett as part of a premeditated murder-kidnap scheme.

According to prosecutors, Montgomery drove from her home in Melvern, Kansas, to Stinnett's home, purportedly to purchase a puppy. However, once inside the residence, Montgomery attacked and strangled Stinnett, who was eight months pregnant, until the victim lost consciousness.

Using a kitchen knife, Montgomery cut into Stinnet's abdomen, causing her to regain consciousness. The two women fought and Montgomery then strangled Stinnett to death.

Montgomery then cut the fetus from her womb and tried to pass the baby off as her own. The child was later safely recovered.

The conviction and sentencing were later upheld on appeal.

Her attorney, Kelley Henry, said that Montgomery deserves to live because she is mentally ill and suffered childhood abuse.

"Lisa Montgomery has long accepted full responsibility for her crime, and she will never leave prison," Henry said in a statement. "But her severe mental illness and the devastating impacts of her childhood trauma make executing her a profound injustice."

Bernard's attorney, Robert Owen, said in a statement the federal government misled the jury in the US District Court for the Western District of Texas, which in 2000 found Bernard guilty of murder. Its decision was tainted by false testimony, Owen said.

"This evidence confirms that Mr Bernard is simply not one of the 'worst of the worst' offenders for whom we reserve the death penalty, and that sparing his life would pose no risk to anyone," Owen said.