A fan blade that snapped off a United Airlines engine mid-flight, causing it to rain debris over Colorado last month, had microscopic cracks, federal investigators with the National Transportation Safety Board said Friday.

The engine part was last inspected more than four years ago.

The Boeing 777 made an emergency landing back at Denver International Airport on Feb. 20 after the engine caught on fire soon after takeoff. No one onboard or on the ground was injured.

The broken blade on the Pratt & Whitney engine had been used on 2,979 flights since its last inspection in 2016, the NTSB said. It wasn’t due for another inspection until it reached 6,500 flights – more than twice the number it had flown when it broke.

The seven-page report said “multiple fatigue fracture origins” were found on the inside of the hollow fan blade and “multiple” secondary cracks were discovered.

The cracks were consistent with wear and tear, investigators said.

Investigators said they believe the failed blade then sheared off part of an adjacent fan blade. 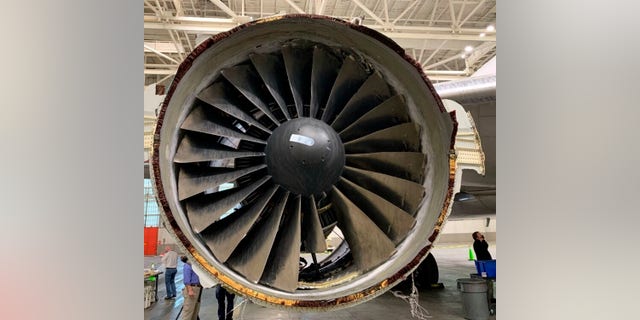 This photo provided by The National Transportation Safety Board shows the damaged engine of United Airlines Flight 328. (Associated Press)

Pratt & Whitney has called for the fan blades to be inspected more frequently – after every 1,000 flights and The Federal Aviation Administration (FAA) ordered that all blades be inspected on each plane before flying again.

“Additional work is underway to further characterize the size and depth of the secondary cracks,” the NTSB update said. Investigators also announced they would pore over old inspection records of the failed engine, The Washington Post reported.

After hearing an explosion and seeing a flash of light, Delucia said he quickly stuffed his wallet in his pocket, thinking it would help responders identify his body more easily if he did not survive, he told the AP.

Much of the debris landed in Commons Park and in the Northmoor and Red Leaf neighborhoods of Broomfield, which is about 20 miles north of downtown Denver.

A similar problem with another United flight on a Boeing 777 in 2018 prompted an emergency landing at the time. The plane was bound for Hawaii as was the plane last month, The Post reported.

The engine failure occurred four minutes after the plane took off. The NTSB said the pilots had just increased power to the two engines when a loud bang was captured on the cockpit voice recorder.

Information from the plane’s data recorder indicates that the engine shut down automatically and triggered a fire warning.

The NTSB investigation is ongoing and will likely continue for months or longer.

The particular Pratt & Whitney engines involved are found on fewer than 100 Boeing 777 jets currently in use and on several dozen other planes not in use because of the pandemic. They are all United planes or airlines in Japan and South Korea.

Investigators have not made conclusions about the cause of the engine failure at this point in the probe.

Fox News’ Paul Best and The Associated Press contributed to this report.