The state’s coroner is investigating the cause of death of a COVID-19-positive Melbourne man in his 20s widely reported to be among the youngest Australians to succumb to the virus.

The man, who lived in Craigieburn, a coronavirus hotspot in Melbourne’s northern suburbs, died at home overnight on Tuesday. 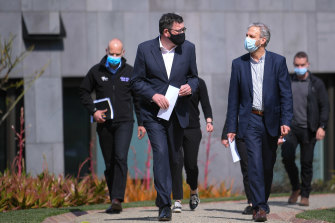 A post-mortem found he was carrying coronavirus, but it is believed the man had other serious health conditions, including heart and lung issues, prior to his death.

At a press conference on Wednesday, Chief Health Officer Brett Sutton addressed media reports that there had been confusion over the man’s cause of death, amid claims from a family member he suffered a heart attack before he died.

Professor Sutton said the man’s “ultimate cause of death” was still being determined.

“The coroner will make their determination in relation to the exact cause of death, but it’s a positive COVID case, and we need to manage it as such,” he said.

“There are no final coroner’s findings in relation to this case. But anyone who dies will have a diagnosis of cardiac arrest or respiratory arrest or cardiorespiratory arrest … that’s an immediate cause of death, but COVID was the underlying diagnosis here and it’s for that reason that there are close contacts who need to quarantine.”

Professor Sutton said several of the man’s family members, who were deemed his close contacts after his death, will not be allowed to attend his funeral as they must remain in quarantine for 14 days.

“My absolute sympathy goes out to this family,” he said. “They are going through the most difficult time and they will not be able to attend a funeral in person as primary close contacts.”

However, Professor Sutton said Victorians should not be shocked that there was a real risk young people could die after being infected with coronavirus.

He said the Delta variant was proving to be “extremely dangerous” and leading to roughly twice the rate of hospitalisations for unvaccinated people, when compared to previous variants.

Infectious diseases physician Peter Collignon estimated that an otherwise healthy and unvaccinated person in their 20s or 30s infected with coronavirus had roughly a one-in-10,000 chance of death.

This compares to a one-in-10 chance of death for an unvaccinated person aged in their 80s infected with the virus.

But the Australian National University professor said the risk of death was elevated “two or threefold” when a young person was infected with COVID-19 and had other serious health conditions.

The microbiologist said for this reason it was critical the coroner probed every young death linked to coronavirus so “we actually know what the relative contribution of coronavirus was to that person’s death”.

Professor Collingnon said the higher hospitalisation rate linked to Delta globally appeared to be largely linked its increased contagiousness, rather than a significant increase in virulence.

“More people are being hospitalised because it’s twice as spreadable,” he said.

A Victorian Coroner’s Court spokeswoman confirmed the coroner was investigating the cause of the man’s death.

“The death of the man in his 20s was reported to the coroner as it was unexpected and a cause of death was not sufficiently known for a doctor to sign a medical certificate of cause of death,” she said. “As the investigation is ongoing, no further comment can be made.”

Department of Health deputy secretary Kate Matson said details of the circumstances of the man’s death were still being gathered, but there were “strong indications” from the Victorian Institute of Forensic Medicine that warranted his death to be classified as coronavirus-related.

The man’s death has reignited important questions about how Australia classifies coronavirus fatalities and comes as 423 new infections and two more deaths were recorded in Victoria in the past day.

In Australian states and territories, like other countries across the world, the COVID-19 death figures being reported daily are cases where a person dies with the coronavirus infection in their body given it is a notifiable disease in which all cases must be reported.

SARS-CoV-2 – the virus which causes COVID-19 – could be the major cause of death, a contributory factor or simply an infection present when a person dies of another medical condition.

According to the Australian Bureau of Statistics, “coronavirus is recorded on the medical cause of death certificate for all decedents where the disease caused, or is assumed to have caused or contributed to death”.

The Age revealed last year that another man in his 20s, who was then identified as Australia’s youngest COVID-19 victim, was suspected by senior health officials to have died from another cause, possibly a drug overdose, at the time Premier Daniel Andrews publicly linked his death to the coronavirus.

The investigation into that death has closed and the coroner determined the findings would not be released publicly.

There is no suggestion Mr Andrews was aware of the possible involvement of drugs or another cause of death before his August 14 daily briefing, but The Age was told by people familiar with the case last year that officials in the Health Department had discussed the circumstances of the man’s death as being indicative of an overdose.

The young man was infected with coronavirus when he died, but the State Coroner, John Cain Jnr, decided to classify the case as a “reportable death”, prompting a coronial investigation.