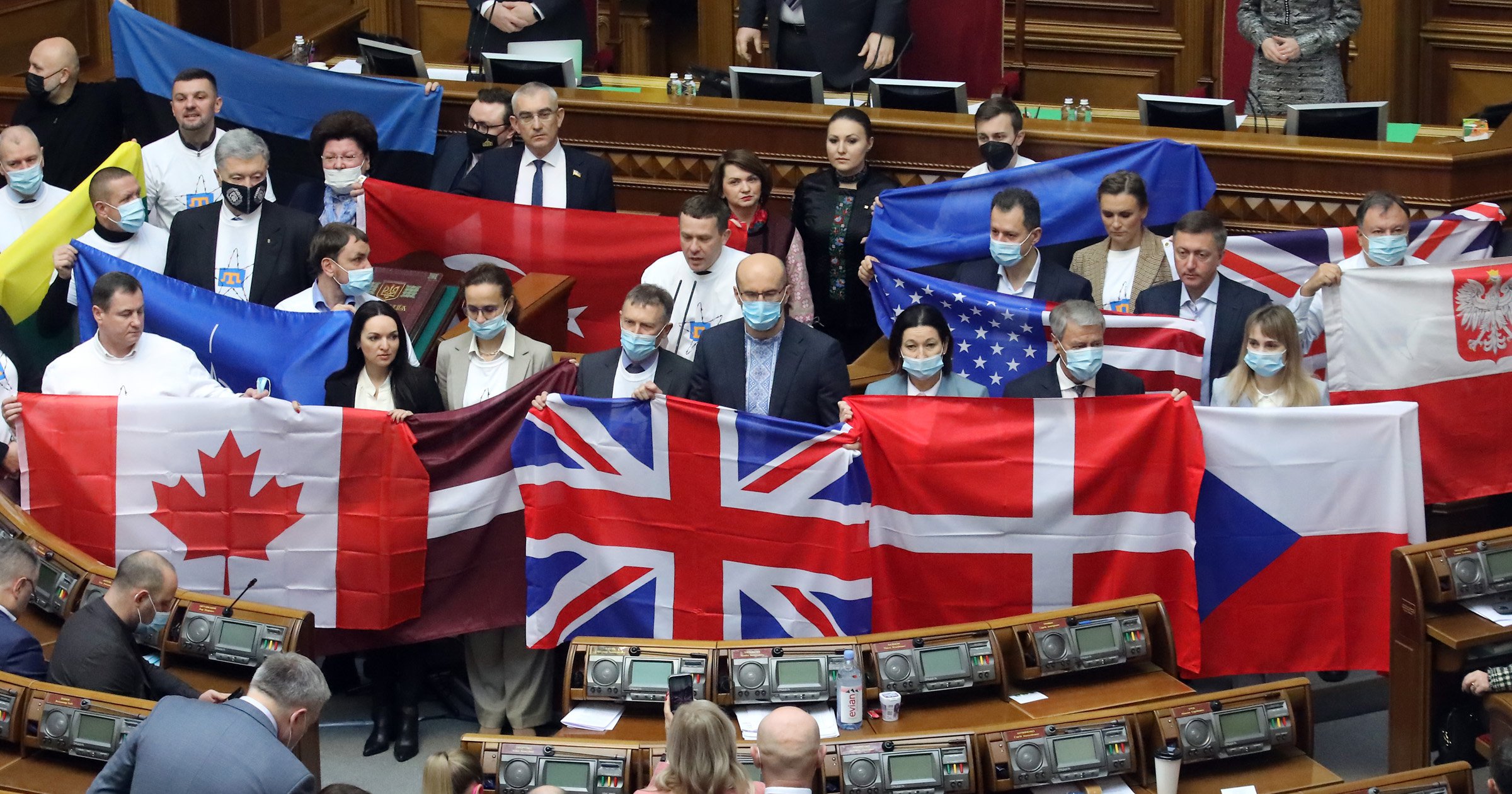 Ukrainian politicians held up flags of NATO members, including Britain, as a show of thanks for international support as tensions with Russia continue.

Moscow has fuelled fears of an invasion by amassing more than 100,000 troops at its western neighbour’s border.

It has also built up tanks, artillery and missiles and has staged a number of high-profile military exercises. The Kremlin says it has no plans to invade and instead accuses NATO of undermining the region’s security.

It has demanded the military alliance leaves eastern Europe and bars Ukraine from ever becoming a member – requests that have been ruled out.

Boris Johnson is set to hold a phonecall with Russian President Vladimir Putin tomorrow afternoon, as high-stakes negotiations continue with the West.

In what will be seen as a show of defiance against Russian aggression, MPs in the Rada held up flags of several allies, including Britain, NATO, Canada, Poland, the USA, Denmark, Turkey and the Czech Republic.

Zelensky said support for his country has been ‘the biggest since 2014’ and said a new ‘format of political cooperation’ was being forged with the UK and Poland.

Ukrainian Foreign Minister Dmytro Kuleba said this would cover security, along with trade, energy and investment.

Johnson is due to visit Kiev today with a promise of £88million for Ukraine’s governance and to help it become less dependent on energy from Russia. He said: ‘It is the right of every Ukrainian to determine how they are governed.

‘As a friend and a democratic partner, the UK will continue to uphold Ukraine’s sovereignty in the face of those who seek to destroy it.

‘We urge Russia to step back and engage in dialogue to find a diplomatic resolution and avoid further bloodshed.’

Foreign Secretary Liz Truss was supposed to fly to the Ukrainian capital alongside Johnson before announcing yesterday that she had tested positive for Covid-19.

While plenty of support has been shown to Ukraine, no NATO member has offered to send in troops if Russia does decide to invade.

Zelensky told Ukraine’s parliament he had signed a decree to increase the size of the country’s army by 100,000 soldiers, with the formation of 20 new brigades over three years, the BBC reports.

‘The decree is not because a war is coming soon. I am saying this to everyone. The decree is for peace in Ukraine soon and onwards,’ he added.