The Ukrainian military’s southern command said a rocket strike targeted the depot in Russian-held Nova Kakhovka, about 35 miles (55 kilometers) east of the Black Sea port city of Kherson, which is also occupied by Russian forces.

The precision of the strike suggested Ukrainian forces used U.S-supplied multiple-launch High Mobility Artillery Rocket Systems, or HIMARS, to hit the area. Ukraine indicated in recent days that it might launch a counteroffensive to reclaim territory in the country’s south as Russia devotes resources to capturing all of the eastern Donbas region.

Russia’s Tass news agency offered a different account of the blast in Nova Kakhovka, saying a mineral fertilizer storage facility exploded, and that a market, hospital and houses were damaged in the strike. Some of the ingredients in fertilizer can be used for ammunition.

A satellite photo taken Tuesday and analyzed by The Associated Press showed significant damage. A massive crater stood precisely where a large warehouse-like structure once stood in the city,

Ukraine now has eight of the HIMAR systems, a truck-mounted missile launcher with high accuracy, and Washington has promised to send another four.

Advisor to Head of Kherson administration Serhii Khlan confirmed that Ukrainian Army hit the ammunition warehouse that Russia had in Nova Kakhovka.

What a pretty sight. pic.twitter.com/AvFKeR15Zt

Elsewhere in Ukraine, Russian shelling over the past 24 hours killed at least 16 civilians and wounded 48 more, Ukraine’s presidential office said in its Tuesday morning update. Cities and towns in five southeast regions came under Russian fire, the office said.

Nine civilians were killed and two more wounded in Donetsk province, which makes up half of the Donbas. Russian rocket attacks targeted the cities of Sloviansk and Toretsk, where a kindergarten was hit, the presidential office said.

The British military said Tuesday that Russia was continuing to make “small, incremental gains” in Donetsk, where heavy fighting led the province’s governor last week to urge its 350,000 remaining residents to move to safer places in western Ukraine.

Yet many in the Donbas, a fertile industrial region in eastern Ukraine made of the Donetsk and Luhansk provinces, refuse — or are unable — to flee, despite scores of civilians being killed and wounded each week.

The death toll in a Russian rocket attack that struck an apartment building in Donetsk province on Saturday has risen to 34. The head of the Donetsk regional military administration, Pavlo Kyrylenko, made the announcement on social media, saying nine wounded people had been rescued from the building in Chasiv Yar.

“The Russians continue their tactics of intimidating the peaceful population of the Kharkiv region,” Kharkiv Gov. Oleh Syniehubov wrote Tuesday on Telegram. 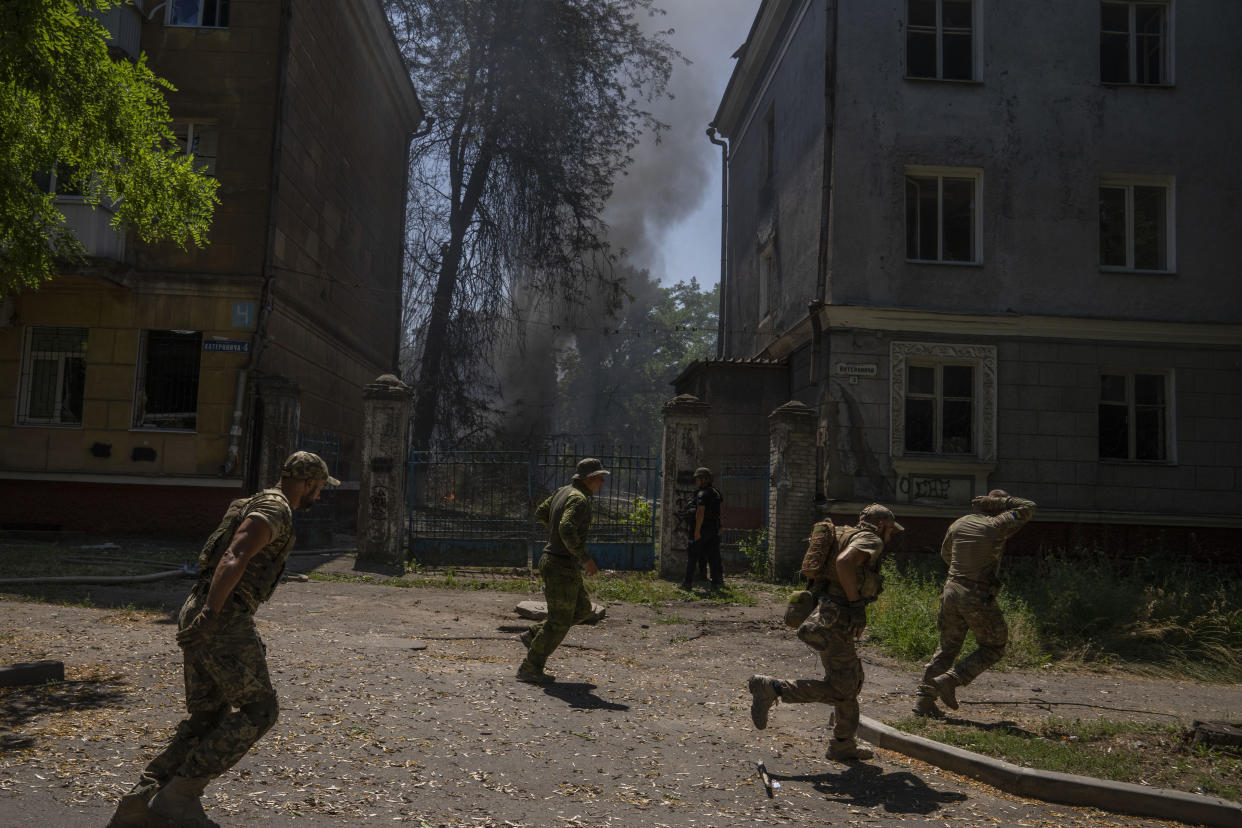 Ukrainian authorities also said that Russian fire struck the southern city of Mykolaiv on Tuesday morning, hitting residential buildings. Twelve people were wounded as the result of the Russian shelling, with some of the rockets hitting two medical facilities, regional governor Vitaliy Kim said on Telegram.

Air raid sirens sounded Tuesday in the western city of Lviv — the first daytime sirens there in over a week — and in other areas of Ukraine as Russian forces continued to make advances.

In eastern Luhansk, “fighting continues near the villages” on the administrative border with neighboring Donetsk, Luhansk Gov. Serhiy Haidai told the Associated Press on Tuesday.

“The Russian army burns down everything in its way. The artillery barrage doesn’t stop and sometimes continues for four to six hours on end,” Haidai said.

The British Defense Ministry’s intelligence briefing said Russia had seized the Ukrainian town of Hryhorivka and continued to push toward the Donetsk province cities of Kramatorsk and Sloviansk.

“Russian forces are likely maintaining military pressure on Ukrainian forces whilst regrouping and reconstituting for further offensives in the near future,” the intelligence briefing said.

However, Russia may be relying more heavily on private military contractors, like the Wagner Group, to avoid a general mobilization, the British ministry said. Western officials have accused Wagner of using mercenaries to fight in Africa and elsewhere.

— The Kremlin said Russian President Vladimir Putin would visit Iran next week. Kremlin spokesman Dmitry Peskov said that Putin will travel to Tehran next Tuesday to attend a trilateral meeting with the leaders of Iran and Turkey, a format for Syria-related talks. U.S. National Security Adviser Jake Sullivan told reporters on Monday that Russia was seeking hundreds of surveillance drones from Iran, including weapons-capable ones, for use in Ukraine.

— Russian and Turkish military representatives plan to meet in Istanbul on Wednesday to discuss the transport of Ukrainian grain through the Black Sea, a Russian Foreign Ministry official said. Pyotr Ilyichyov, head of the ministry’s department for international organizations, told Russian news agency Interfax that “representatives of Ukraine, as well as U.N. (officials) in the role of observers” are also expected to take part in the talks. Ilyichyov reiterated that Moscow was ready “to assist in ensuring the navigation of foreign commercial ships for the export of Ukrainian grain.”