UK economy went into the red in August shrinking by 0.3% – far worse than expected – as rampant inflation and Ukraine crisis caused havoc… with fears a full-blown recession is inevitable

The UK economy dropped into the red in August as rampant inflation caused havoc – sparking fears a full-blown recession is inevitable.

GDP fell by 0.3 per cent, much worse than the flatlining analysts had expected, with factories and consumer services firms struggling.

Underlining the grim situation the country faces, growth for July was also downgraded from 0.2 per cent to 0.1 per cent.

The figures mean the economy is likely to contract overall in the third quarter, with the Office for National Statistics (ONS) confirming there would need to be growth of more than 1 per cent in September to avoid an overall fall.

The outlook for the current period is similarly gloomy, with two consecutive quarters of shrinking the technical definition of recession.

Chancellor Kwasi Kwarteng insisted the Government’s energy support package and growth plan will ‘address the challenges that we face’.

But the financial market turmoil in the wake of his mini-budget has sent mortgage rates soaring, heaping yet more pressure on cash-strapped Britons. 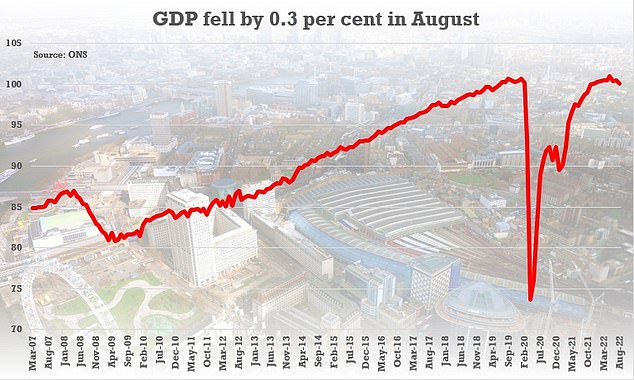 GDP fell by 0.3 per cent in August, much worse than the flatlining analysts had expected, with factories and consumer services firms struggling

The International Monetary Fund (IMF) warned yesterday that the UK economy could sharply reduce in 2023 as consumer suffers from inflation and higher interest rates.

It downgraded its forecast for UK GDP growth next year to just 0.3 per cent in 2023 from 0.5 per cent previously pencilled in.

‘Our growth plan will address the challenges that we face with ambitious supply-side reforms and tax cuts, which will grow our economy, create more well-paid skilled jobs and, in turn, raise living standards for everyone,’ he added.

The ONS said there has been a continued slowing in three-month on three-month growth, with gross domestic product (GDP) falling by 0.3 per cent in the quarter to August.

On a monthly basis, the economy is now back to where it was before the pandemic struck, having been higher than pre-Covid levels earlier in the summer.

Grant Fitzner, chief economist of the ONS, said: ‘The economy shrank in August with both production and services falling back, and with a small downward revision to July’s growth the economy contracted in the last three months as a whole.

‘Notable decreases were also seen across much of manufacturing.’

He added: ‘Sports events too had a slower month after a strong July and many other consumer-facing services struggled with retail, hairdressers and hotels all faring relatively poorly.

‘On the positive side, these falls were partially offset by stronger than usual summer performance from many professional services such as lawyers, accountants and architects.’

The Bank of England has already predicted the economy will fall into recession towards the end of the year and has forecast a contraction of 0.1 per cent in the third quarter.

GDP narrowly grew in the second quarter, edging up by 0.2 per cent over the three months to June after being revised upwards.

The latest ONS data showed manufacturing output dropped 1.6 per cent in August, while the services sector also saw a decline, down 0.1 per cent.

Output in consumer-facing services tumbled by 1.8 per cent in August after growth of 0.7 per cent in July, according to the figures.

The construction sector was the only one of the three main parts of the economy to see growth in August, with 0.4 per cent expansion.

Sophie Lund-Yates, Lead Equity Analyst at Hargreaves Lansdown said: ‘Investors are waiting for signs that the recession has arrived, and while on traditional metrics, the UK isn’t there yet, today’s announcement takes us one heavy step closer to that reality.’ 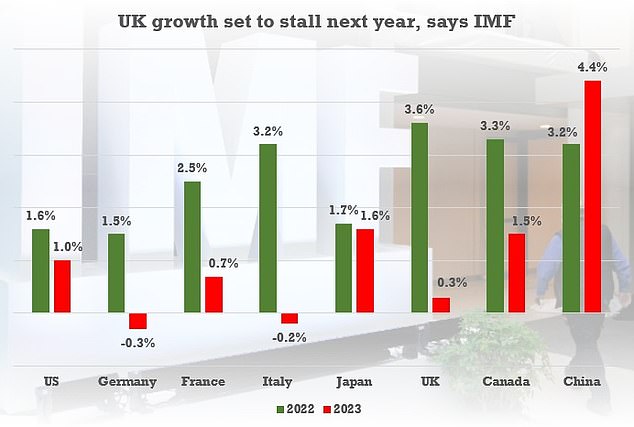