Two teenage members of a girl gang who beat up an Egyptian student, 18, ‘over a boy’ before she suffered a stroke and died WALK FREE from court while another gets just eight months

Two teenage members of a girl gang who beat up an Egyptian student before she suffered a stroke and died walked free from court today – while another woman was handed a custody sentence of just eight months.

Mariah Fraser, 20, was sent to a young offenders’ institution for teaming up with two other girls to punch Egyptian student Mariam Moustafa and slam her into a bus stop.

The 18 year old suffered a stroke shortly after the attack ‘over a boy’ on February 20, 2018, and died a month later.

Britania Hunter, 18, and a 16-year-old girl were spared custody at Nottingham Crown Court for their role in the attack on Mariam.

Prosecutors could only bring charges of affray against the group, rather than manslaughter or murder, as her death could not be reliably linked to their actions – something her family slammed today. 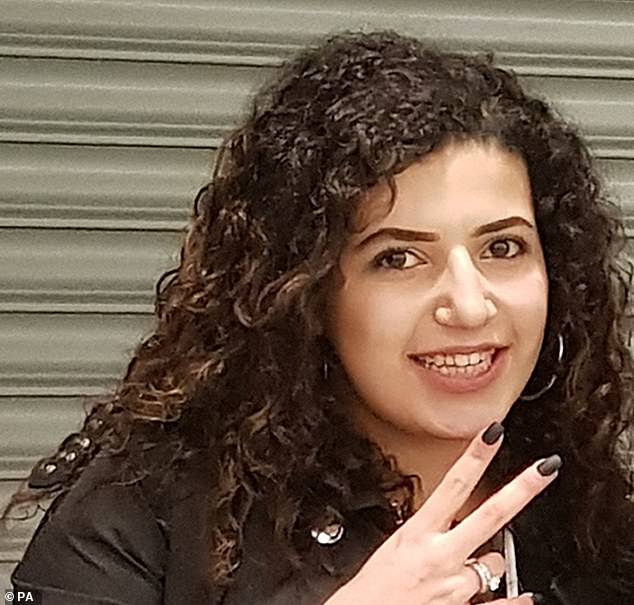 Mariam Moustafa, pictured, was punched and slammed into a bus stop by a girl gang while others laughed and watched. She suffered a stroke and died a month later 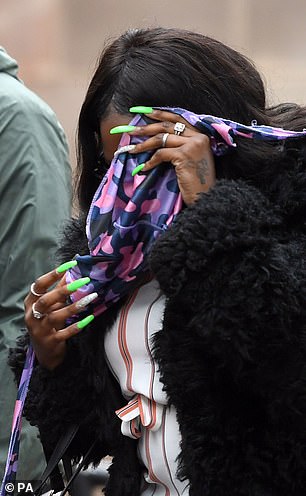 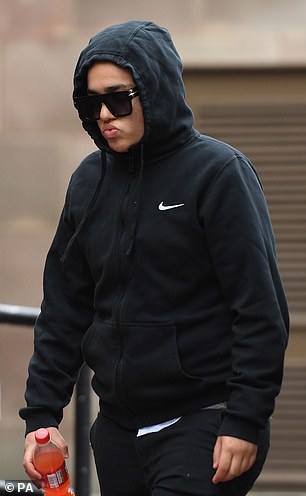 Her father, restaurant chef Mohamed Moustafa, blasted the sentence, saying ‘there is no justice in this country’.

Mr Moustafa, who moved to the UK from Italy four years ago to give his children a better education, added: ‘I am doing my best for my family. We try to do our best in this country.

‘We try to respect the law. But after what happened today, I feel nobody can protect my family. We are not safe in this country.

‘When I hear there is no link behind the stroke and what happened to my daughter, I don’t believe it at all. I feel very upset about what happened.

‘For me, it is 100 percent manslaughter. It [the stroke] happened after several hours, not several days.

‘My daughter was killed, and nothing happened. I waited all this time for justice, but now I feel there is no justice in this country. I don’t think we will stay here in the UK.’

Mariam, who was described as ‘keen, hard-working and well-liked’ by her college and was set to study at engineering at a London university, collapsed and went to hospital, but was released and suffered a stroke at home around 12 hours after the attack. 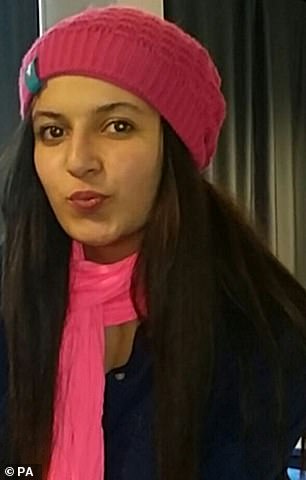 The court heard how two of the six, the 16-year-old girl and an 18 year old who will be sentenced later this month, were the main aggressors in the altercation, while the others were either filming the group as Mariam was attacked, or laughing

She had been punched several times during the confrontation ‘fuelled by social media’ near a bus stop in Parliament Street at 8pm while her friend Pablo Jawara tried to protect her.

Now her sister Mallak lives in fear and wants to leave the country.

Mallak, 16, said: ‘I feel scared. I feel afraid to walk around town. How do I know they won’t come after me next?

‘All I want to do is leave here. I feel like I can’t live my life anymore. Mariam was unique. She was the only person I wanted to be like.

‘I feel like my sister died again today. They (the defendants) were just smiling and laughing. They don’t even feel sorry.

‘They have let them out and said, “go and live your life”. You haven’t done anything. What about the bright future my sister had?

‘They took it off her. That’s not fair. Eight months in custody for my sister’s life.’

The court heard how two of the six, the 16-year-old girl and an 18 year old who will be sentenced later this month, were the main aggressors in the altercation, while the others were either filming the incident or laughing while watching.

Passing sentence today, Judge Gregory Dickinson QC branded the defendants ‘aggressive’ and ‘cowardly’ and said: ‘This was not an attack motivated by hostility to race or religion. It was to do with a boy.’

Detailing the reasons why he decided to refer the 16-year-old girl to the youth court, Judge Dickinson added: ‘The family of Mariam want the maximum possible sentence to be imposed on all those involved in the case.

‘Sympathy for their desperate sadness cannot displace a proper, dispassionate approach to sentencing in a court of law.

‘It would only add to the tragedy of this case to put [the girl] into custody.’

Hunter was given a 12-month community order and told to carry out 40 hours unpaid work, and the 16-year-old girl was remitted back to youth court with a view to a referral order.

The prosecution said after the incident that Fraser, who has previous convictions for robbery, attempted robbery and assault, had searched the internet for ‘I have put someone in a coma’ when she realised she may be arrested for her part in the attack.

Mariam’s parents, Mr Moustafa, 51, and Nessrin Abu-Elneinen, 42, were visibly upset as CCTV footage of their daughter collapsing on the bus was played to the court yesterday.

The incident caused uproar in Egypt and the country’s embassy had called on those responsible to be ‘brought to justice swiftly’.

Fraser, Hunter and the 16-year-old girl all admitted affray a week before their trial. 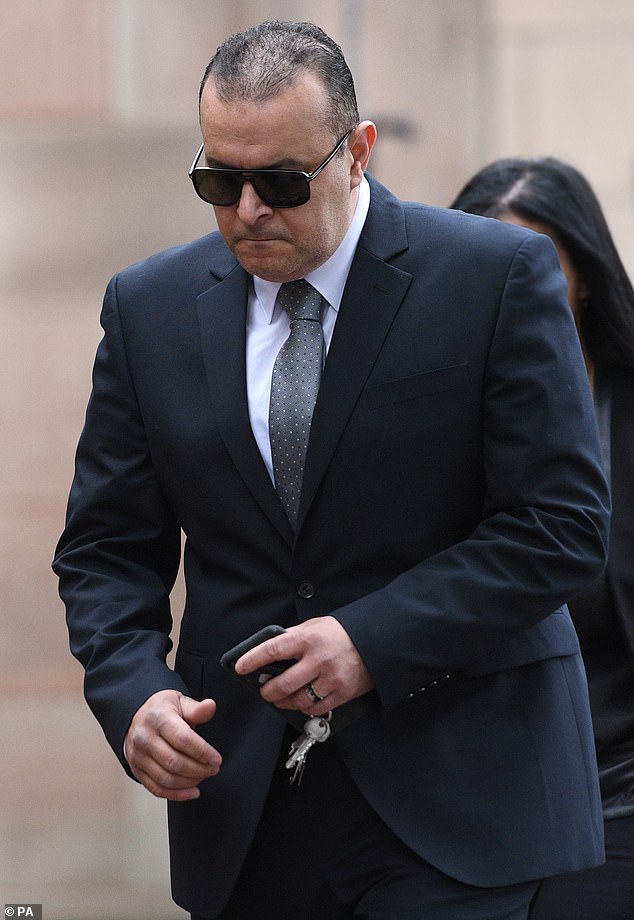 Mariam’s father Mohamed previously slammed the affray charges brought, saying: ‘It is very weak. It is not fair at all. From the first day I was very upset about the charge. Affray – it’s nothing’ 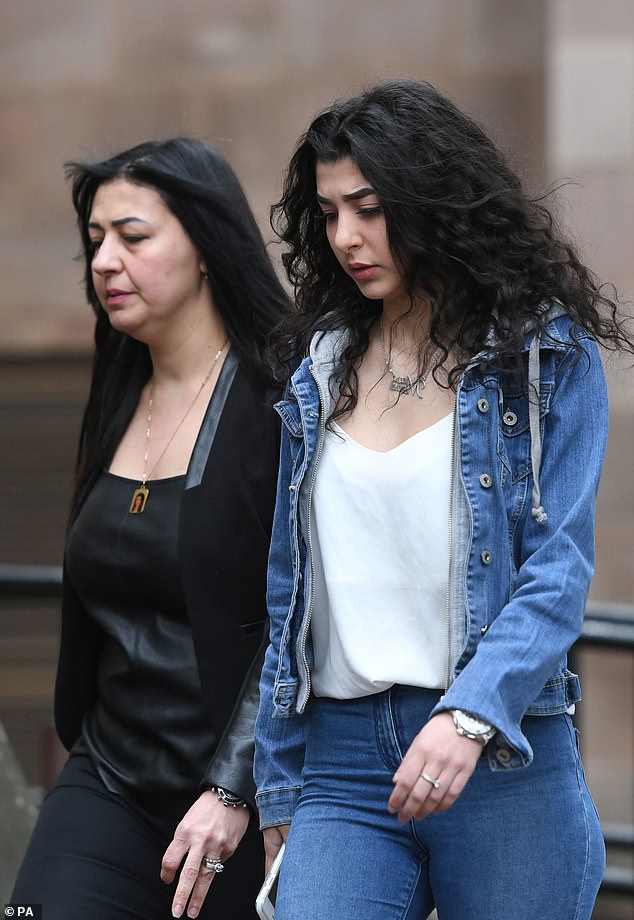 The prosecution said four pathologists had concluded the attack could not be ‘reliably linked’ to Miss Moustafa falling into a coma or her eventual death, meaning manslaughter charges could not be brought.

Months before her death, Mariam Moustafa took to YouTube to explain how her heart condition had left her ‘scared’ to go to college or leave the house.

Miss Moustafa’s sister Mallak previously revealed Mariam had been born with half a heart.

Speaking directly to Fraser, the judge said: ‘You used violence. You contributed significantly to the overall seriousness of the affray.

‘It is not correct to say that you were “on the periphery”, as was submitted on your behalf.

‘In my judgment, your role as a part of the incident as a whole, with your record of convictions, means that a custodial sentence is necessary.’

Opening the facts of the case, prosecutor Luke Blackburn said: ‘To call it an argument would be a mis-description as it was all one way. It developed into threats and violence at that bus stop.

‘Miss Moustafa and Mr Jawara got on the bus, doing their best to get away from what was going on.’

Mr Blackburn said the 16-year-old youth banged on the bus window to persuade the driver to let them on.

The Crown’s barrister continued: ‘All six went upstairs to find the two people they had been attacking.

‘Mr Jawara stood up and did his best to physically protect his friend – he just got in the way of the defendants and did not use any violence.

‘The atmosphere was intimidating and violent with the forceful nature of the language being used.’

Three other teenagers, aged 18, 17 and 16, will be sentenced at Nottingham Youth Court on June 19 alongside the 16-year-old girl.