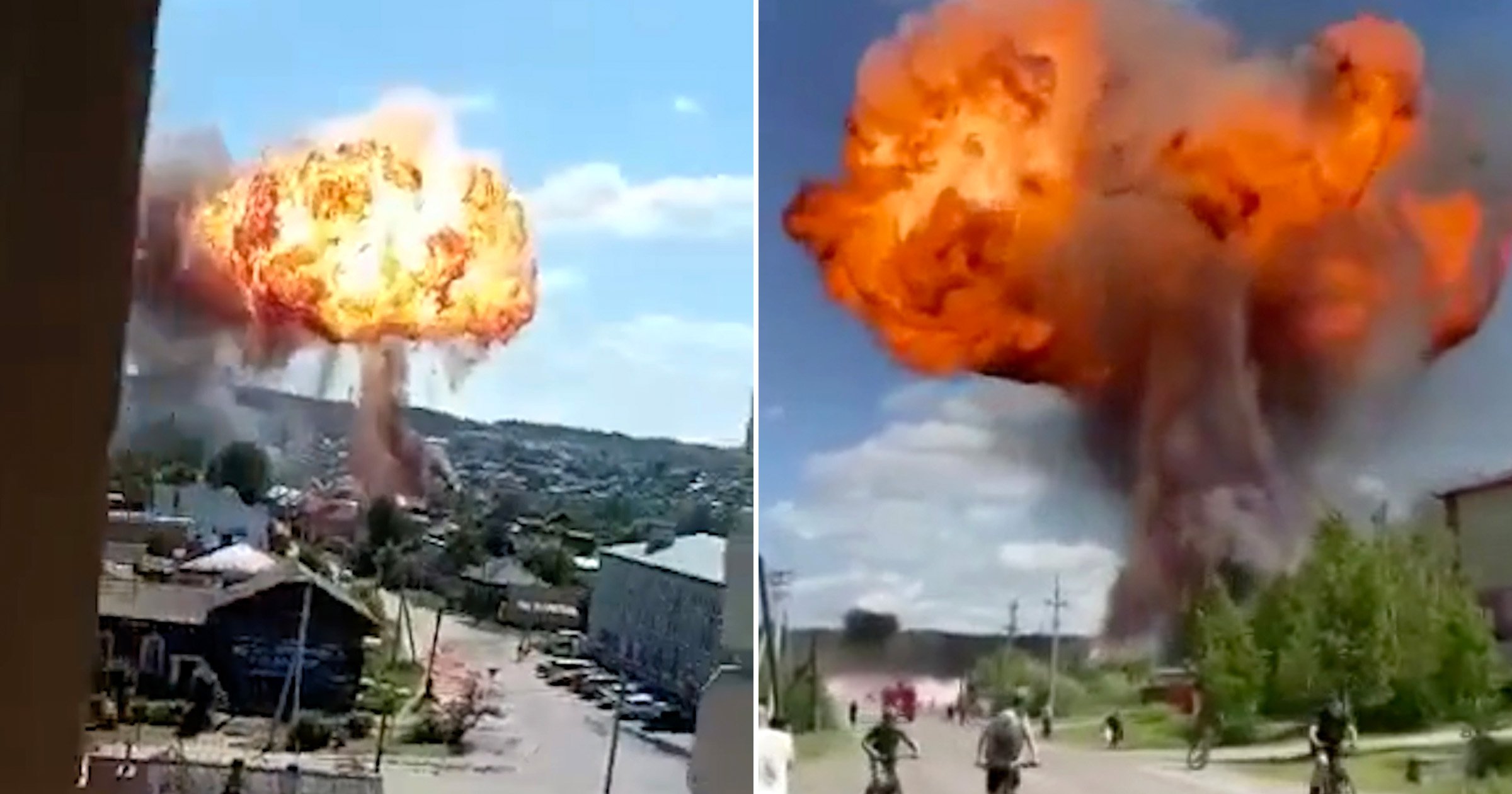 A gas explosion in the Russian Urals triggered a huge fireball just hours after a blast at a power plant caused a widespread blackout.

The two incidents are the latest in a series of mystery fires and explosions to rock the country following its bloody invasion of Ukraine.

First, flames erupted at Gysinoozerskaya Hydro-Power Plant from an unknown cause.

The fire sent a huge plume of black smoke rising into the air and caused a blackout across large parts of Siberia.

Videos caught the moment of the devastating fireball, which caused several people to sustain burns.

Maria, a resident of Talitsa, said: ‘I was at work in the town centre. Suddenly we all shook.

The incident is being investigated, with the cause currently unknown.

A number of fires at strategic facilities have led to suspicions of sabotage attacks by people angry over President Putin’s failing invasion of Ukraine.

Faulty electric wiring was presented as a potential cause, but some speculated there was sabotage involved.

The institute building focused on research related to Russian air and space defence, as well as the development of new anti-aircraft systems.

That same month, a Russian oil depot went up in flames amid claims of cross-border attacks by Ukrainian forces.

And earlier this month, around 125 people were rescued from a burning building in Moscow.

People climbed to the roof of the ten-floor Grand Setun Plaza in Kuntsevo district, around nine miles west of the Kremlin, to escape the inferno.

Accidental fires are common in Russia, where hundreds of blazes are recorded each year due to ageing and poor infrastructure and non-compliance with lax safety standard.

But over the last year, some of the country’s more mysterious fires have been directly linked to the war in Ukraine.

A military enlistment office in the city of Nizhnevartovsk was struck with Molotov cocktails in May amid unrest.

Protesters could be seen approaching the building and hurling their ammunition towards the doors and windows before fleeing the scene.

The Kremlin is yet to offer an insight into the spike in explosions.

But former Russian Duma member and anti-Putin activist Ilya Ponomarev launched a Telegram channel to inform audiences about these actions.

He said: ‘It’s happening everywhere, and that’s why nobody can say that it’s the work of Ukrainian intelligence or Ukrainian saboteurs.

‘Ukrainians could carry out some acts of sabotage close to the border, but they are not doing this in Vladivostok – obviously, it was Russians who did this.’

It has been 120 days since Putin ordered troops to invade its southern neighbour, plunging Russia into economic turmoil, displacing millions of people and destroying huge parts of Ukraine.

Moscow is still concentrating on the east after being forced to retreat from capital city Kyiv following fierce resistance from Ukraine’s forces.

As fighting intensifies, two British nationals face being executed by Russia after being captured while fighting alongside the Ukrainian army and sentenced to death.

Aiden Aslin, 28, from Newark, and Shaun Pinner, 48, from Bedfordshire, have been treated as foreign ‘mercenaries’ by authorities in the self-proclaimed Donetsk People’s Republic (DPR).

Britain and their families argue they were legitimate members of the Ukrainian army who accordingly should be treated as prisoners of war under the Geneva Convention.

The two men, who lived in Ukraine before the invasion, are appealing their death sentences.

But the family of Mr Aslin told the BBC they have spoken to him on the phone and say he has been warned ‘time is running out’.