London: Mining magnate Andrew Forrest has accused Western politicians of “propping up the Kremlin” by relying on natural gas imports from Russia instead of ramping up the production of alternative energy capabilities.

Speaking just hours after he was personally slapped with sanctions by the Kremlin, barring him from entering Russia indefinitely, “Twiggy” Forrest said he would wear the sanction as a badge of honour. 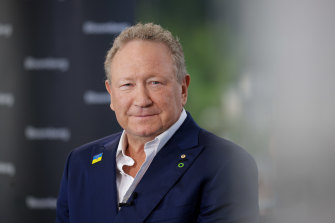 Andrew Forrest wears a Ukraine pin at the World Economic Forum in Davos, Switzerland, on May 23.Credit:Bloomberg

The Fortescue Metals Group founder said Vladimir Putin’s regime was the only beneficiary from widespread energy price rises, as he called out leaders in the West for not doing enough to end their reliance on gas imports from the country.

However, that pledge is already unreachable, with data from the Bruegel think tank in Brussels showing that as of Tuesday, EU countries had already imported 51 billion cubic meters of gas via pipeline from Russia.

Forrest, who is sinking billions into his plans to decarbonise his own company and also create green hydrogen, said Western countries should be looking to renewable sources of power like wind and solar energy to replace fossil fuels faster.

Asked about being sanctioned by the Kremlin, Forrest said he had no regrets about calling out Russian over the invasion of Ukraine. “I don’t take it lightly, I take it seriously but I would say to other leaders in the room that you are not worth talking to unless you have been sanctioned.”

South Australian Premier Peter Malinauskas was also on the sanctions list, the “first Premier blacklisted by Vladimir Putin”, he tweeted. 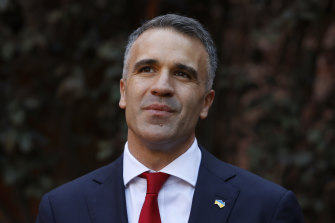 “It means I cannot visit Russia. While travelling to Russia wasn’t on my bucket list, it appears this decision has been made in response my government’s strong stance in standing up for Ukraine. This, he listed, included legislating to ban State government investment in Russian assets, sending medical equipment to Ukraine and welcoming Ukrainian refugees and advocating for more.

He ended with a direct message to the Russian president: “Vladimir Putin, I won’t be bullied, the State Government won’t be bullied and I will continue to stand up for democracy.”