London: French President Emmanuel Macron agreed to start rebuilding a relationship with Australia based on “trust and respect” in his first phone call with new Prime Minister Anthony Albanese on Thursday evening.

Macron, who wrote privately to congratulate Albanese following his election victory on Saturday evening, reminded his new counterpart of the “deep breach of trust” which had occurred in an ugly chapter in Franco-Australian relations last year following the cancellation of a $90 billion submarine contract. 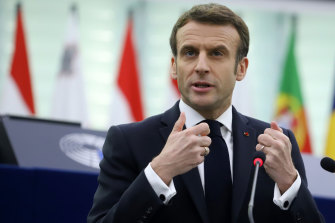 In a conversation that lasted more than 20 minutes, the pair agreed the two nations needed to repair the bond to jointly overcome global challenges, including the climate “emergency” and strategic challenges in the Indo-Pacific.

A new road map to structure a new bilateral agenda would be created, the pair agreed, with the aim of strengthening resilience in the region and contributing to peace and security amid a more assertive China.

Albanese said the conversation was “warm and constructive” in a social media post on Thursday evening, with the pair discussing a free and open Indo-Pacific, greater co-operation on climate and energy policy and support for Ukraine.

Macron’s comments showed that nerves are still raw between the two administrations following the controversial termination of the defence contract in favour of a new three-way security pact, which included access to nuclear submarines, between the United States and Britain.

France was outraged that it was only informed of the alliance hours before the public announcement was made, and later expressed fury at Morrison’s decision to leak a private text message from Macron after the contract was axed.

The French president’s words follow those of France’s outgoing foreign minister, Jean-Yves Le Drian, who took a swipe at Albanese’s predecessor, Scott Morrison, just hours after he conceded defeat at the weekend, saying the former prime minister had handled the matter with “such brutality and cynicism” and “unequivocal incompetence”.

According to a lengthy read-out of the conversation issued by the Élysée Palace on Friday morning AEST, Macron recalled the historical ties forged between France and Australia, and the immense gratitude of generations of French people for the fight led by young Australians in the World War I trenches. 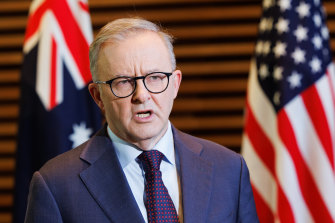 “This sacrifice will never be forgotten, especially when war has returned to the heart of the European continent,” the statement said.

It added: “After noting the deep breach of trust that followed former Prime Minister Scott Morrison’s decision to terminate the future submarine program, the Head of State and the Australian Prime Minister agreed to rebuild a bilateral relationship based on trust and respect to jointly overcome global challenges.”

The pair also discussed the situation in Ukraine and the response to the risk of a food crisis with the FARM (Food and Agriculture Resilience Mission) initiative.

Albanese, who has made regional engagement a priority of his first days in office, could get a chance to meet with Macron and his fellow European leaders as soon as next month, as Australia has been invited to attend the NATO summit in Madrid courtesy of its status as one of the alliance’s enhanced opportunities partners.

Just hours after he was sworn in on Monday, Albanese flew to Tokyo to attend a meeting of the Quad with the leaders of the US, Japan and India.

Speaking to Sky News Australia on Thursday, Albanese said he was confident he would develop a “strong relationship” with Macron.

“The way that you develop with leaders when you have exchanges is not to leak the information and the details,” he said, in a clear dig as his predecessor.

Labor’s slightly improved promises on climate change will also potentially make striking a free trade deal with the European Union easier. Brussels and Macron have put significant emphasis on climate and other sustainability standards in trade negotiations, despite France and several EU nations not being on track to meet their 2030 targets.