Washington: Voters appear to be unmoved by President Donald Trump’s bout with COVID-19, with early polls showing no "sympathy boost" for the ailing president amid poor reviews for his debate performance last week.

Instead, Democrat Joe Biden is surging in national polls and now has his biggest lead since late July.

It can generally take a week for major developments in the race to be reflected in the polls, but early evidence is that voters are largely unsympathetic to Trump's illness. 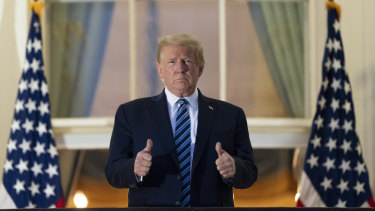 Two-thirds of likely voters in a Reuters/Ipsos poll said Trump wouldn't have been infected with the coronavirus if he had taken the disease more seriously – numbers all the more lopsided considering that 9 per cent are sceptical he ever had the virus at all.

Previous presidents have gotten a short-term boost in the polls following serious medical issues. Dwight Eisenhower's approval rating shot up from an already high 71 per cent to 78 per cent when he had a heart attack in September 1955 – the highest for any peacetime president in modern history except for John F. Kennedy. Ronald Reagan also got an 11-point bump following the assassination attempt in 1981. 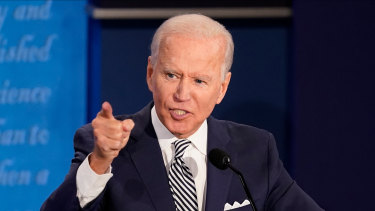 The difference is that those were unforeseen events, said B. Dan Wood, a Texas A&M University professor who has studied presidential approval during crises. Trump's COVID-19 diagnosis comes seven months into a pandemic that the president has acknowledged downplaying. And he has belittled people, like Biden, who wear protective gear.

"Trump's COVID is totally expected, given his behaviour. No one should be surprised," Wood said. "Eisenhower's heart attacks and Reagan's assassination attempt injury were shocks because they were not expected."

Only 7 per cent of registered voters in a Yahoo/YouGov poll described Trump's COVID-19 diagnosis as a "wake-up call," but they were mostly Republican.

Among Democrats, 84 per cent said they were already treating the coronavirus more seriously than the president, while 53 per cent of Republicans described the diagnosis as simply bad luck for the president and not indicative of greater risk, according to the Yahoo poll.

Biden now leads by 9.1 percentage points in the RealClearPolitics average of polls — a lead 3 percentage points larger than Hillary Clinton had at the same point in 2016. Biden also remains above 50 per cent, giving Trump little opportunity to change the race by winning over undecided voters.

A CNN poll released on Tuesday suggests last week's debate might have been pivotal. By 57 per cent to 26 per cent, registered voters who watched it said Biden did a better job than Trump.

Those voters were most harsh in their judgment of Trump's continued ambiguity on far-right groups, with 64 per cent saying he hasn't done enough to denounce White supremacists. At the debate, Trump said the Proud Boys, which the FBI has classified as an extremist group, should "stand back and stand by."

CNN started conducting the poll before Trump's COVID-19 diagnosis was made public last Thursday, but most of the responses came after that news. The poll showed Biden leading by 16 points and has a margin of error of 3.3 points.

Trump's quarantine has already changed the tone of the race, as Trump is confined to the White House for the next week or so as Biden continues to campaign.

That represents a role reversal for the two candidates, with Biden having spent much of the past six months confined to his Delaware home – a stance the Trump campaign derided as "Biden's basement strategy."

Biden holds a considerable fundraising lead and has used the money to buy expensive television ads. Biden has suspended most of his negative ads while Trump recuperates from COVID-19, but continues to run contrast ads critical of Trump's handling of the virus.

Our weekly newsletter will deliver expert analysis of the race to the White House from our US correspondent Matthew Knott. Coming soon. Sign up now for the Herald‘s newsletter here, The Age‘s here, Brisbane Times‘ here and WAtoday‘s here.