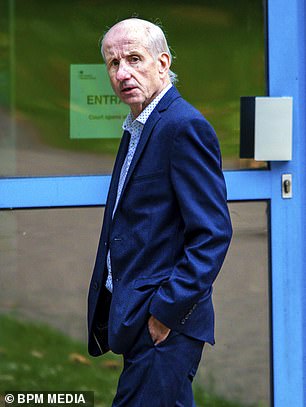 A 64-year-old train passenger who performed oral sex on a recently widowed woman, 57, in front of young children after a boozy journey have avoided jail for outraging public decency.

Raymond Burr and Deborah Tobyn were travelling on a c2c train from London towards Basildon on May 19 last year when the pair became involved in ‘lewd behaviour’ in one of the carriages.

A woman approached the pair and asked them to stop, but they continued. As soon as they left the train at Pitsea, the pair were stopped by a transport officer who asked them to identify themselves. Both pleaded guilty to an act of outraging public decency earlier this year.

Both Burr and Tobyn were sentenced for their crimes at Basildon crown court on Friday, where the judge heard there were children aged from one to six present on the train.

Tobyn was also charged with an act of outraging public decency. The court heard that Burr and Tobyn, both from Basildon, were drinking at the time of the incident on the train.

It was around 6pm, with many other passengers travelling in the same carriage during rush hour. A selection of those passengers were young children.

The pair began behaving in an indecent manner, when Burr performed oral sex on her. 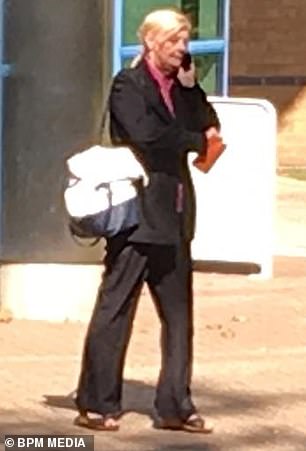 Patrick Duffy, prosecuting, told the court: ‘The first witness was with her grandson. There were children in the carriage, confirmed by the second witness who said there were children aged between one and six on the train. It was lewd behaviour.

‘After the incident, the two got off the train at Pitsea and were stopped by a transport officer. Mr Burr gave his name but Ms Tobyn gave her name as Janet Green. Burr was identified and entered his plea at Magistrates’ Court on May 23.’

The judge also heard that Ms Tobyn initially pleaded not guilty during her first court appearance in June this year, but changed her plea to guilty at Basildon crown court on August 2.

Judge Samantha Leigh, addressing the court, said: ‘It’s deeply unpleasant but I’m well aware of the age and the lack of previous convictions.

‘They are both adults and they are capable of making their own decisions. You were travelling back from London on a c2c train when you engaged in lewd behaviour.

‘One of the witnesses had her young grandson with her and could see what was going on. She stood up and spoke to you, she asked you to desist but you didn’t.

‘There were other children in the carriage and 6pm is a busy time. You were both drinking at the time.’

Before sentencing, she also told the court that Tobyn had been widowed shortly before the time of the incident.

Burr was sentenced to an 18-month community order and was ordered to perform 100 hours of unpaid work, as well as a 30-day rehabilitation requirement.

Tobyn was handed a two-year community order, ordered to undertake 150 hours of unpaid work and was also given a 40-day rehabilitation requirement.