A furious row has broken out between a Tory MP and her Labour predecessor over a hospital visit for treatment on an infected finger.

Dehenna Davison, the Conservative MP for Bishop Auckland, tweeted that she had gone to hospital for treatment on a ‘dodgy finger’.

That prompted criticism from Helen Goodman, who Ms Davison beat for the seat at the 2019 general election, as she questioned why her successor had gone to hospital ‘to get a plaster on your finger’.

Ms Davison then accused Ms Goodman of ‘constant trolling’ before the latter then hit back and accused Tory MPs of ‘online bullying’. 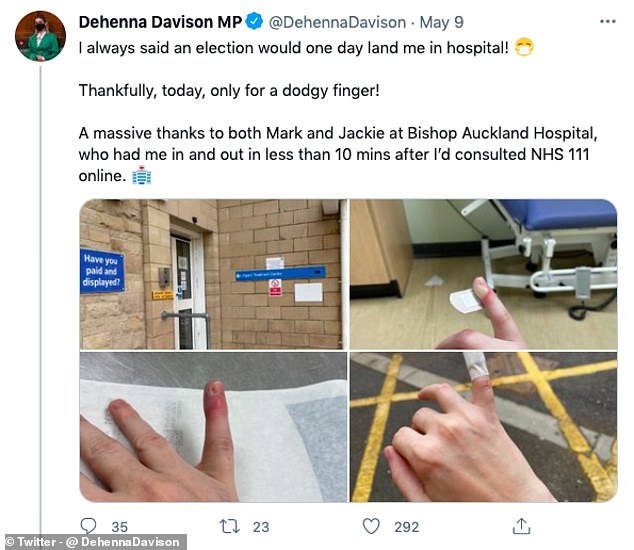 Ms Goodman questioned why Ms Davison had gone to hospital ‘to get a plaster on your finger’, prompting a furious response from the Tory

Ms Davison became the first Conservative to represent the Bishop Auckland constituency after her victory in 2019.

She took the ‘Red Wall’ seat from Ms Goodman who had been the constituency MP since 2005.

Ms Davison tweeted about her visit to hospital on May 9 as she said: ‘I always said an election would one day land me in hospital!

‘Thankfully, today, only for a dodgy finger! A massive thanks to both Mark and Jackie at Bishop Auckland Hospital, who had me in and out in less than 10 mins after I’d consulted NHS 111 online.’

Ms Goodman replied: ‘You went to hospital to get a plaster on your finger!!!!!!what??’

Ms Davison then hit back and said: ‘I was directed to the Urgent Care Centre on professional advice from NHS 111 to have it drained, dressed, and to have antibiotics prescribed.

‘Next time, I’ll just give you a buzz for medical advice.’

Ms Goodman then told Ms Davison that hospitals get ‘too many people who should go to the chemist/gp’ and ‘it’s a very expensive way of giving treatment’.

Ms Davison responded: ‘NHS 111 professionals directed me to the Urgent Care Centre since it’s a weekend and my GP surgery isn’t open. Besides, it’s impossible to attend A&E in Bishop since it closed under your watch.

‘I have another meeting with the Minister on Tuesday to try and reverse the damage.’

Ms Davison subsequently accused Ms Goodman, who she beat for the seat of Bishop Auckland in 2019, of ‘constant trolling’

The Tory MP later tweeted: ‘I have lost count of the number of people who, unprompted, have pointed out the constant trolling I have received from my predecessor. This has come from friends, colleagues, and even strangers, including from members of Helen’s own party.’

She added: ‘I have largely stayed quiet because I haven’t wanted to cause a fuss nor sink to her level, but online bullying must be called out, and enough is enough.’

Fellow Tory MP Richard Holden, who represents the nearby North West Durham seat, got involved in the row and claimed Ms Goodman had ‘attempted to troll’ Ms Davison.

Ms Goodman responded: ‘Here we go even Tory MPs join in online bullying! I’m 63 I don’t even know what trolling means let alone attempt to do it Richard Holden.’