Tom Watson previously described Paddy Power, the betting firm whose owner has just signed him up for an advisory role, as ‘dirty and money grabbing’, it has emerged.

Labour’s former deputy leader, who has been a vocal campaigner for tougher restrictions on the gambling industry, will join one of its biggest companies, Flutter Entertainment, and advise them on best practice, it was reported this week.

However, historic tweets and negative comments about Paddy Power have now resurfaced as the former West Bromwich East MP begins his new job, on a salary described as ‘less than six figures’, according to the Guardian. 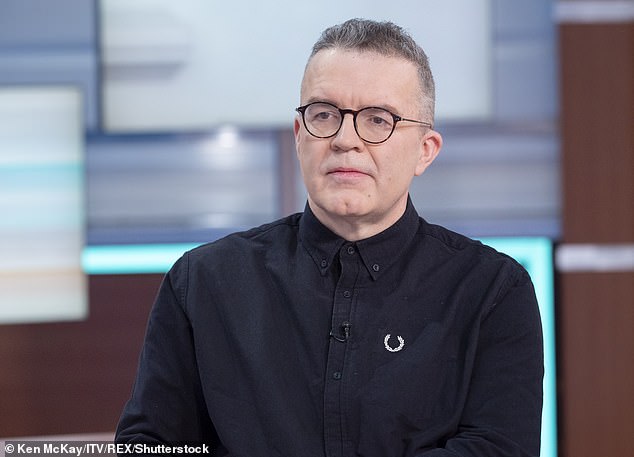 Tom Watson, pictured, will join Flutter Entertainment, one of the UK’s biggest gambling firms, and advise them on best practice

Mr Watson told BBC Radio Five Live in 2014 that the bookie taking bets on the outcome of Oscar Pistorius’ trial, including ‘money back if he walks’, was ‘dirty and money grabbing’.

Pistorius, the world-famous South African athlete, was convicted of the murder of his girlfriend the following year.

Mr Watson also shared a petition calling for the company to remove such offers, writing: ‘Reeva Steenkamp’s death is not sport, Paddy Power’, while in reply to another user discussing its adverts, he said: ‘All about the money for these people.’

The 53-year-old’s new role comes amid a government review of the 2005 Gambling Act in Autumn this year, which could potentially lead to further regulation of betting firms.

Mr Watson said: ‘I have a long-standing interest in this sector and consistently called for action to protect those that may be potentially vulnerable to harm.

‘In taking on this role in Flutter, I intend to get under the bonnet of the business.

He added: ‘I strongly believe that working collaboratively with Flutter in this way will allow me to continue to drive positive change’.

Mr Watson resigned from his West Bromwich East seat in 2019, choosing not to contest the general election. 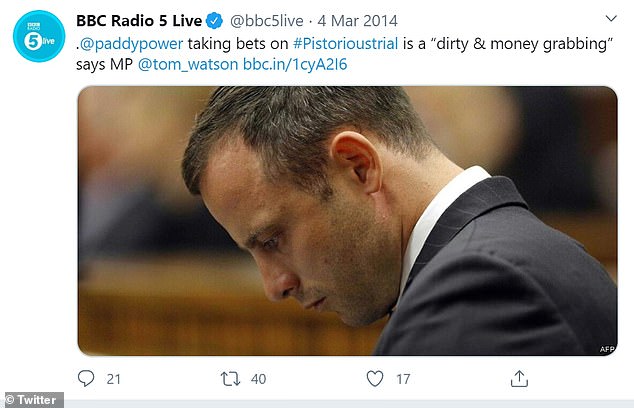 In response to another user discussing Paddy Power adverts, he wrote: ‘All about the money for these people’ 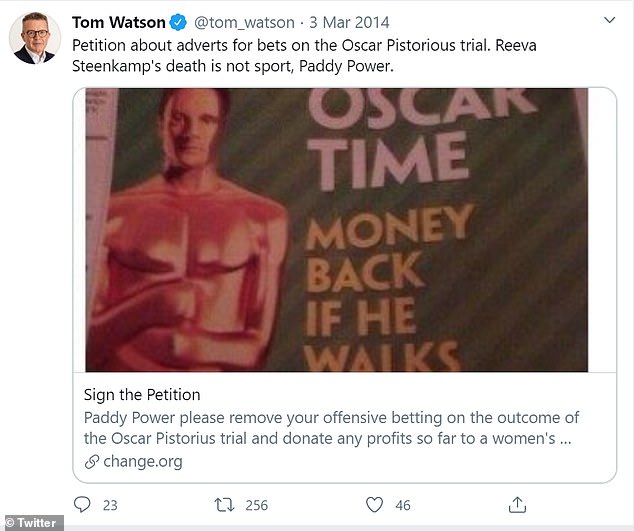 He also shared a petition against the company’s policy of offering bets on the Oscar Pistorius trial, adding: ‘Reeva Steenkamp’s death is not sport, Paddy Power’

He was the former deputy leader of the Labour Party and survived an attempt by Jeremy Corbyn allies to oust him.

Mr Watson – who first entered parliament in 2001 – was one of the most prominent campaigning MPs in the country. He rose to prominence after his role in exposing the hacking scandal at the Rupert Murdoch-owned News of the World.

He also wrote a best-selling book called ‘Downsizing’ about his battle to lose eight-stone and reverse his Type-2 Diabetes.

It is not the first role Mr Watson has taken up since he left front-line politics. He was appointed Chairman of UK music in April this year. The industry group represents the interests of the UK music industry.

Peter Jackson, chief executive at Flutter Entertainment, said:  ‘We have to work harder than ever before to find a way to continue to bring great products and brands to our customers while always having the need to protect the vulnerable clearly in mind. Tom will hold a mirror up to help us make sure we are getting this balance right,’