The first miracle was surviving the car wreck that almost cost him his leg. After that, it was getting upright at all, escaping a bed set up in his house.

“For the next three months,” Tiger Woods said, “I never left that hospital bed even to see my living room … So that was a tough road.”

He eventually could hobble about, then ditch the crutches, then walk with pain and finally some measure of peace. Light golf returned and then a more serious version. He could play with his son Charlie. He could get around a course with some friends.

A week ago the question was whether he could even play in the 2022 Masters, surviving the steep hills of the famed course he’s championed five times.

He apparently can, wrapping up another practice nine amid the drizzle on Wednesday morning. He’s scheduled to tee off at 10:34 a.m. on Thursday.

So why not one more miracle? Can Tiger actually win the Masters just 14 months after almost losing everything?

“Who knows what might happen this week,” said Masters chairman Fred Ridley.

If nothing else, Tiger thinks he can.

That’s Tiger, though. He always thinks he can win. Any other answer would have been more newsworthy. He’s said repeatedly through the years — usually while rehabbing from back injuries — that he would never enter a tournament just to enter a tournament. If he is here, he is here to win.

“When I decide to hang it up when I feel like I can't win anymore, then that will be it,” Tiger said. “But I feel like I can still do it, and I feel like I still have the hands to do it, the body's moving good enough. I've been in worse situations and played and won tournaments.

“Now, I haven't been in situations like this where I've had to walk and endure what I'm going to try and endure, that's going to be different,” he continued. “It's a different challenge.” 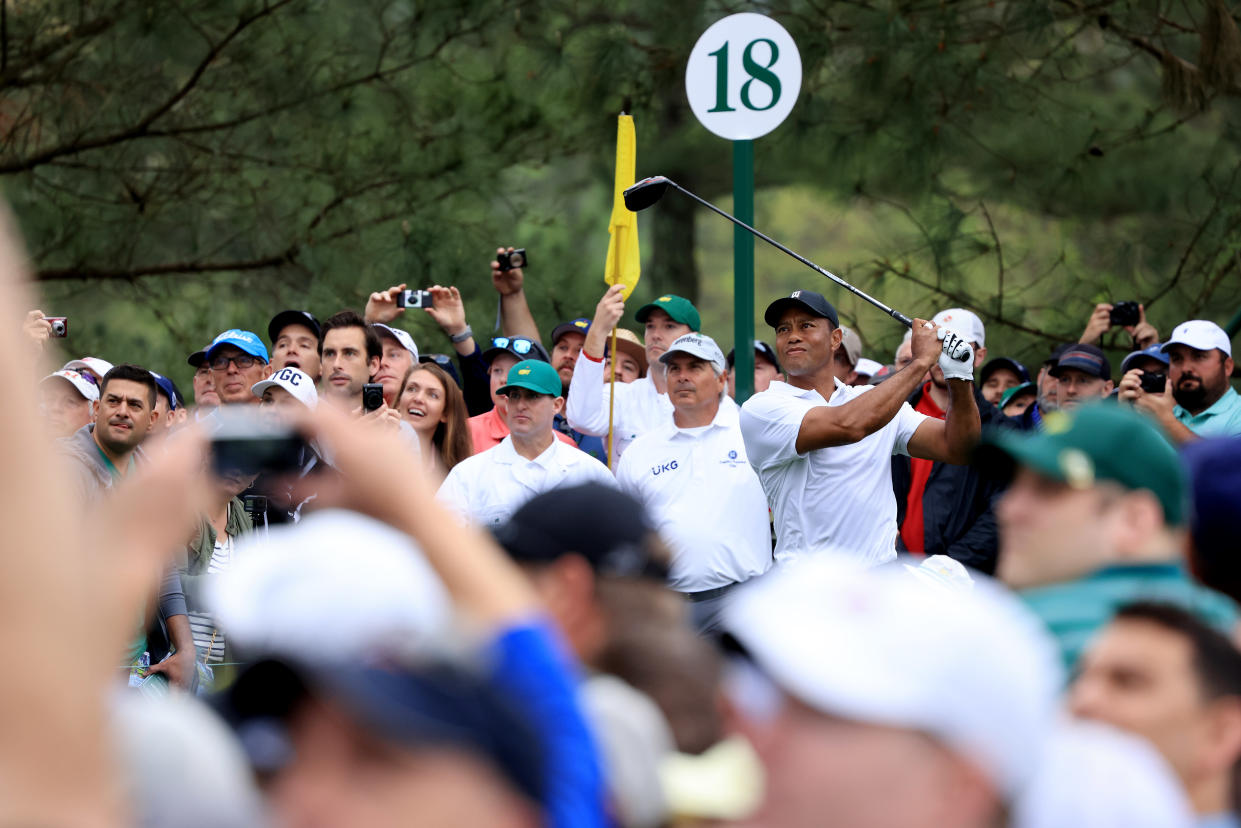 Woods first won here in 1997, electrifying the golf world with a record 18-under performance. He was the youngest champion ever. He delivered three more victories and seven other top-five finishes before winning a fifth green jacket in 2019. Woods hails from California and lives in Florida, but if there was ever a home course for him, it is this one.

So you can never count him out.

That said, a victory would be an enormous upset. Woods hasn’t played a competitive round of golf since the 2020 Masters — played in November that year — where he finished T-38. His last round was a 76. It included a 10 on the par-3 12th hole. He’s currently ranked 973rd in the world.

To walk in after a 17-month competitive layoff and win a major championship would be unprecedented. To win at age 46 in any manner would tie him with Jack Nicklaus for the oldest Masters champion.

Woods would need not just his swing and his putting to hold up, but his legs. Even he has no idea if that’s possible, especially for four consecutive days.

“I can hit it just fine,” Tiger said. “I don’t have any qualms about what I can do physically from a golf standpoint. Now walking is the hard part. This is normally not an easy walk to begin with. Now given the conditions that my leg is in, it gets even more difficult.”

There is no doubting Woods’ competitive instincts. He wants to win. It’s part of why he is at just + 4000 to win the event per BetMGM, tied for 13th along with defending champion Hideki Matsuyama. Jon Rahm (+ 1100) is the betting favorite.

Still, this would be incredible. A more likely goal would be to make the 50-something person cut. The Masters has just 91 competitors here and at least 20 are past their prime or amateurs, so Tiger may need to be better than just two dozen guys.

To beat out the best in the world for four consecutive days seems improbable.

Then again, this is Tiger. We’ve seen improbable upon improbable and Thursday morning, he gets a chance to write another such tale.

“If I feel like I can still win,” Tiger said.

You can bet against him at your own risk.