Will England defeat the French this time? Thousands turn out to watch 600 history enthusiasts fight the Battle of Hastings all over again 952 years on

Thousands of people have turned out to watch a re-enactment of one of the most famous battles in history.

More than 600 soldiers clashed in a Battle of Hastings remake in East Sussex on Saturday.

The two-day even, organised by English Heritage at Battle Abbey, hopes to bring to life the tension of the 1066 conquest.

King Harold and his Saxon army took on Duke William and his Norman soldiers in a fight for the English throne.

Visitors were able to step into Norman and Saxon encampments to learn about life in an 11th century army and experience the sights, sounds and smells of the battlefield.

Medieval music was also performed, along with falconry displays and a chance to try archery.

Organiser Diana Evans said: “This event is always incredibly popular, it’s the opportunity to relive the most important battle in English history and experience what it would have been like on the battlefield for the Saxon and Norman soldiers.”

The event continues on Sunday, which is 952 years exactly since the day of the battle. 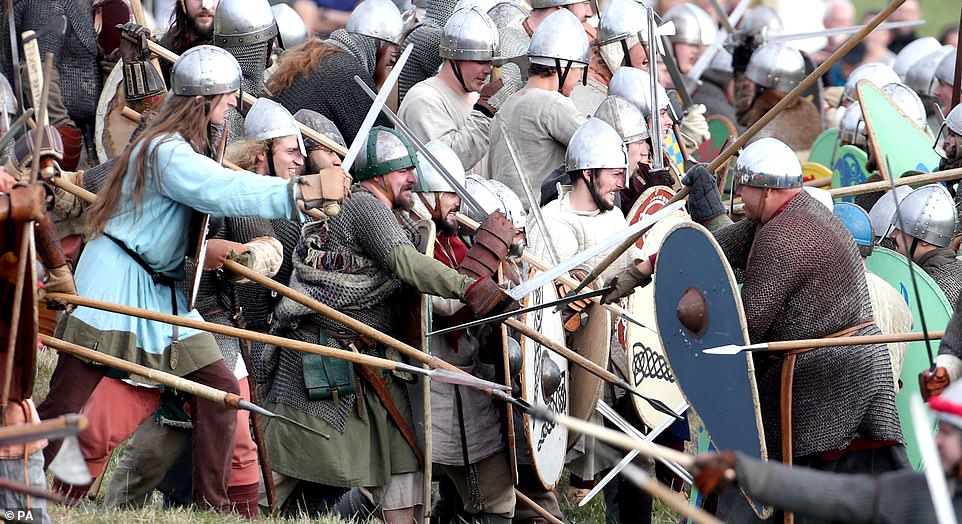 Visitors were able to step into Norman and Saxon encampments and watch an exciting battle re-enactment, with more than 600 soldiers in Battle Abbey, East Sussex this weekend. The two-day event was organised by English Heritage, and even included archery and falconry for visitors to try 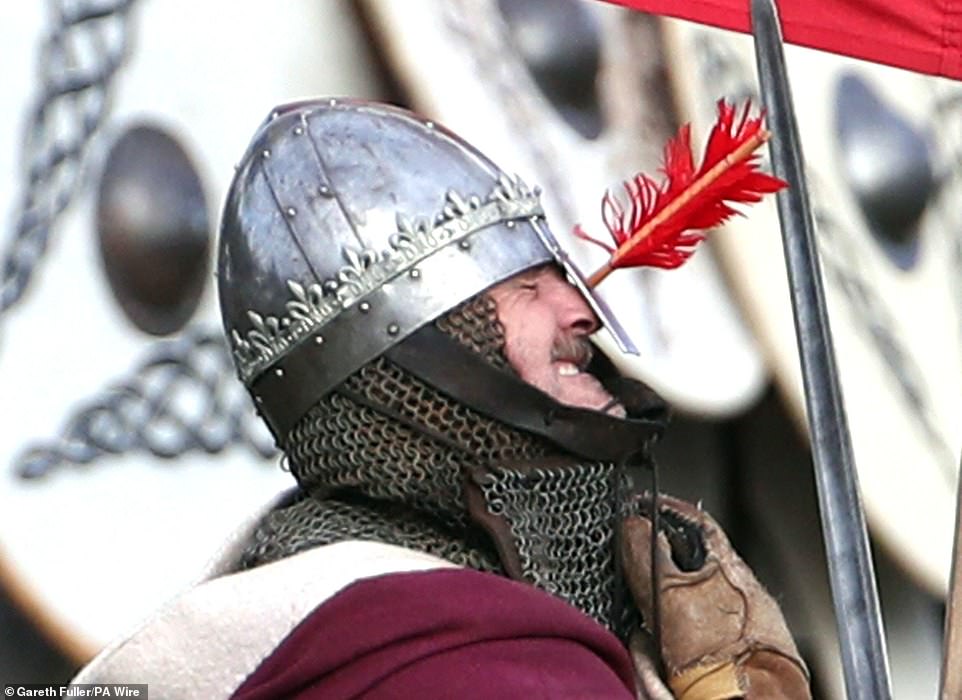 A well dressed King Harold with a now infamous arrow in his eye, which killed him. However, historical accounts imply that was a metaphorical ‘arrow’ which fell from God, and actually King Harold may have been hacked to death instead. It was not obvious at the time the Normans would win the battle, since the two armies were roughly equal in men. This is why the battle lasted the whole day 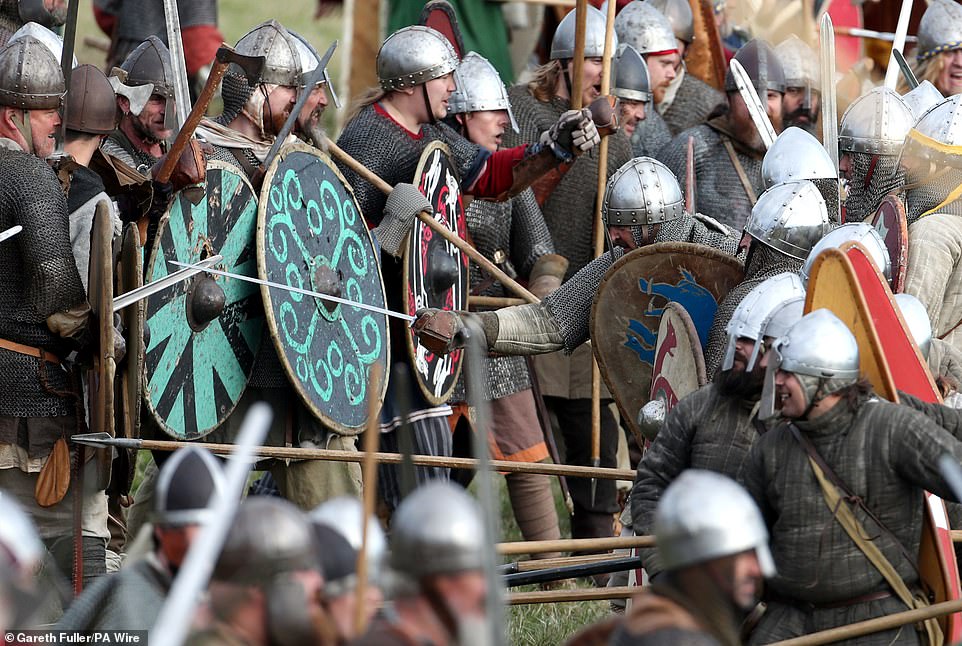 The Saxons, above, created defensive walls which the Normans could not break through. However, the Saxons later retreated and the Normans then gained ground. The battle took place 952 years ago this weekend, but it actually was held seven miles away from Hastings, East Sussex 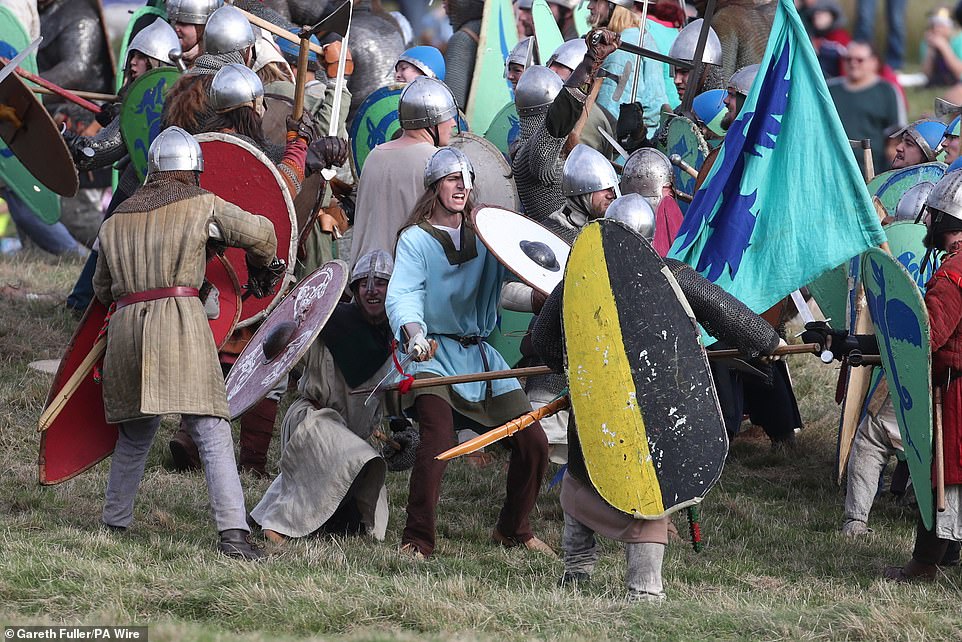 Some Saxons ran during the 1066 battle, which broke the strong shield wall. The Normans also had a slight advantage, for King Harold had been fighting another battle in the north just three days before. Thousands of men on both sides were killed during the battle 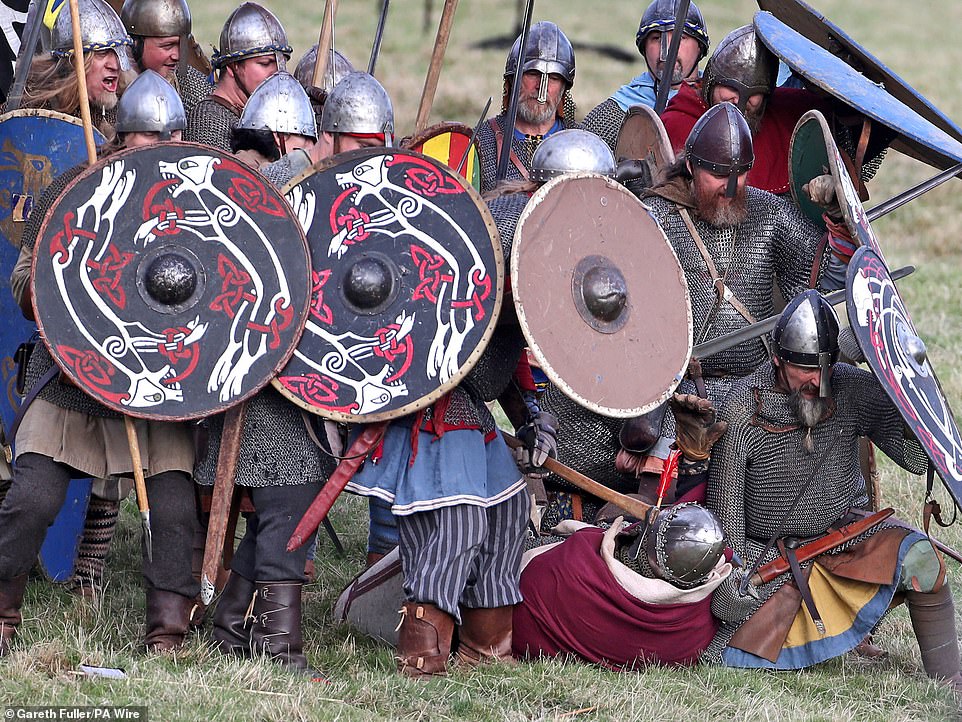 King Harold and his Saxon army took on Duke William and his Norman soldiers in a fight for the English throne. The Saxons had ruled England for more than 600 years. Above, men form the shield wall tactic which kept the Normans from breaking through 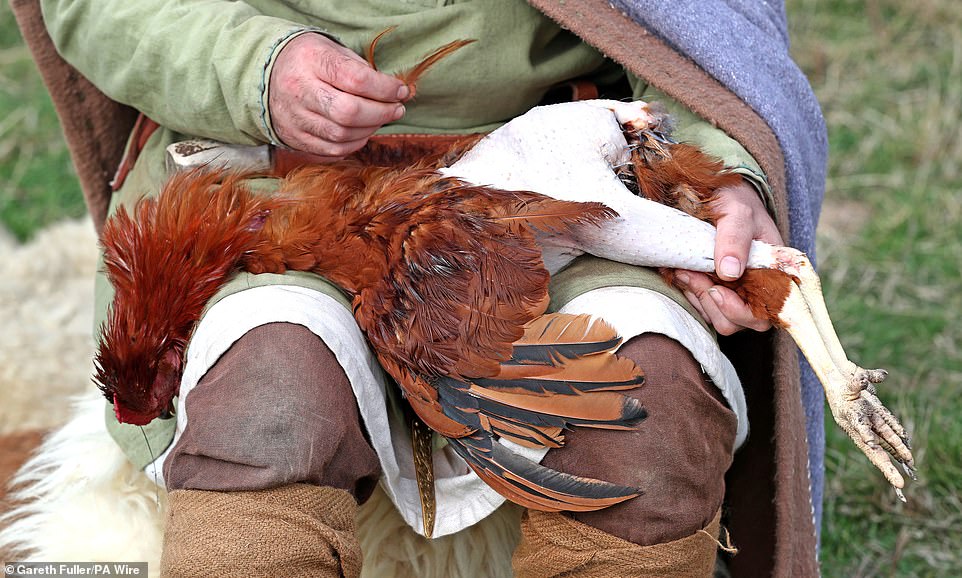 A Saxon man plucks a dead chicken at the show. Medieval music was also performed, in addition to falconry displays and archery. Norman conqueror William, although he had fought in other battles previously, did not win the name after the Battle of Hastings. Instead, the name ‘William the Conqueror’ was not used until after his death. Normans addressed him as ‘the Great’, and native English nicknamed him ‘the B*stard’ 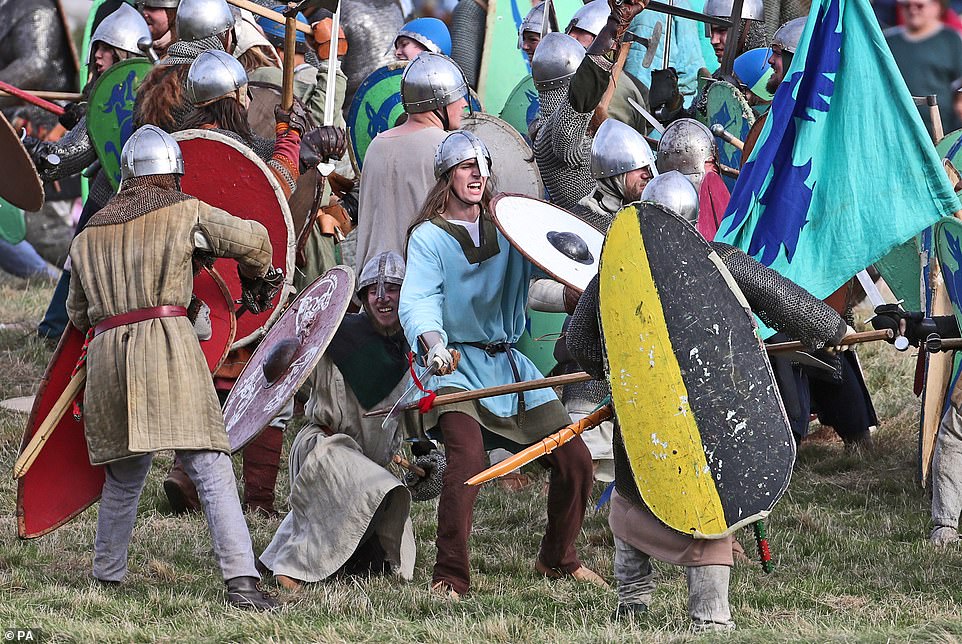 Re-enactors in Battle, near Hastings re-enact the clash between the two armies. After the Normans had won the battle, they set about building churches made in stone, along with intimidating castles. The Normans also banned the slave trade and freed slaves from around England 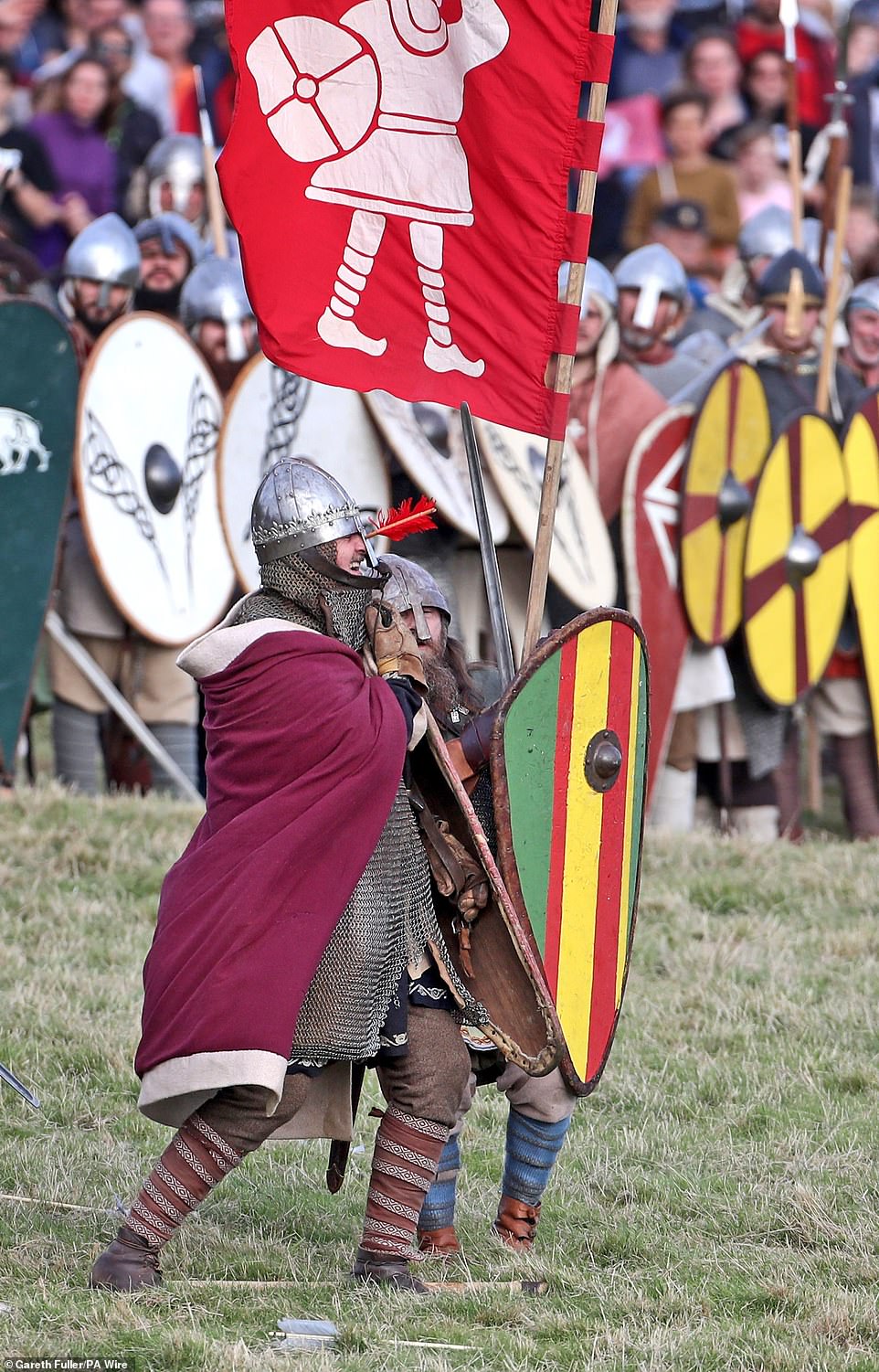 Crowds watch on the moment the Saxon King Harold is shot in the eye by an arrow. Although this scene may have been a more romanticised account of the battle, more than 10,000 English men were lost. But this did not compare with the number of English killed after the battle, as more than 100,000 Britons were later murdered by the Normans when it occupied Britain 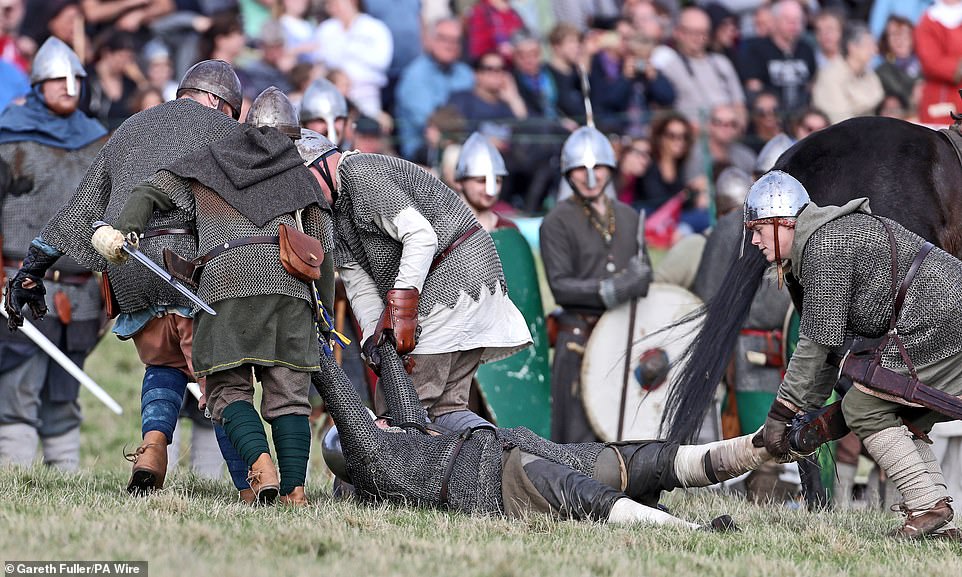 A dead Saxon soldier is dragged away from the ongoing battle. On the infamous day of William’s coronation as King of England on Christmas Day 1066, months after the battle, Englishmen started to riot outside Westminster Abbey. French soldiers set buildings alight in response 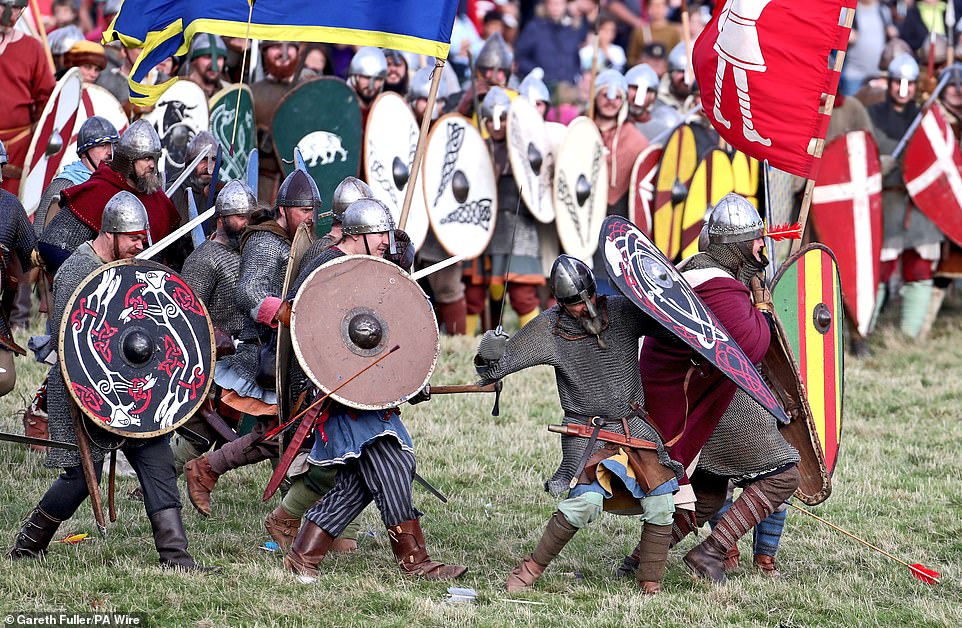 While on his death bed, King Edward granted the throne to King Harold. The Normans used an ancient battle tactic by pretending to run away, which made the Saxons break formation. The Battle of Hastings, above, did not take place until nine months after Edward’s death 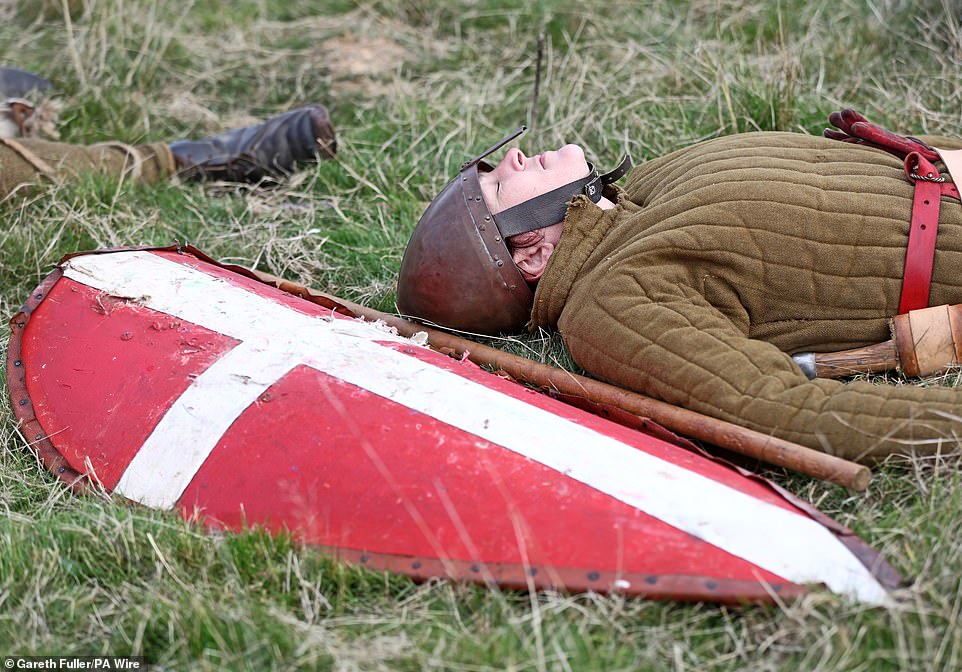 The event continues on Sunday, which is 952 years exactly since the day of the battle. Sadly, the first person to be killed in battle was the jester. The French aide to William the Conqueror began singing to the English troops while flinging his sword about, then ran straight into the English shield wall to be killed 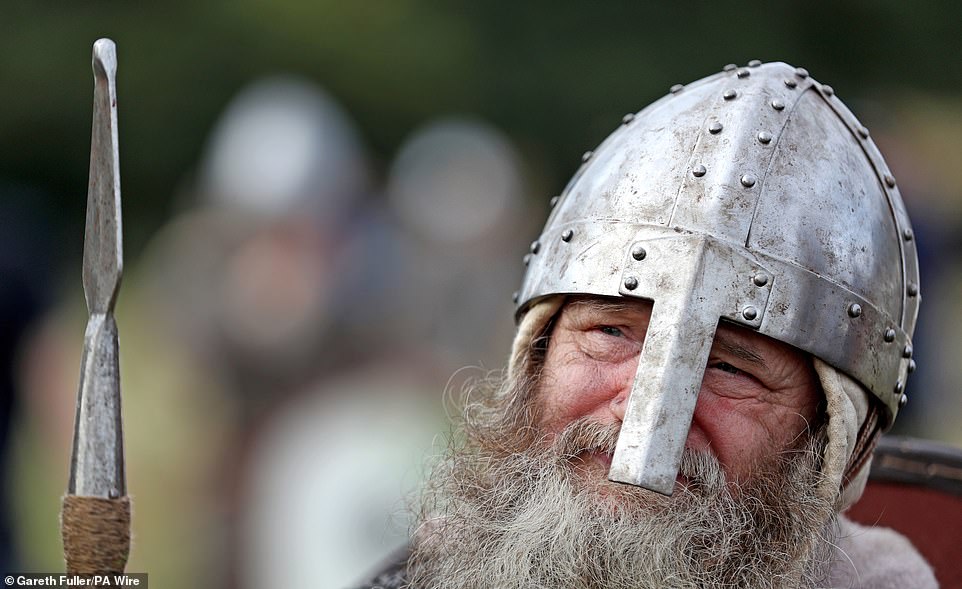 Much like the re-enactment event, both Saxon and Norman sides took a lunch break. Because the battle was very long, both sides took a break to re-group. William the Conqueror, despite being French, was believed to have had Viking origins 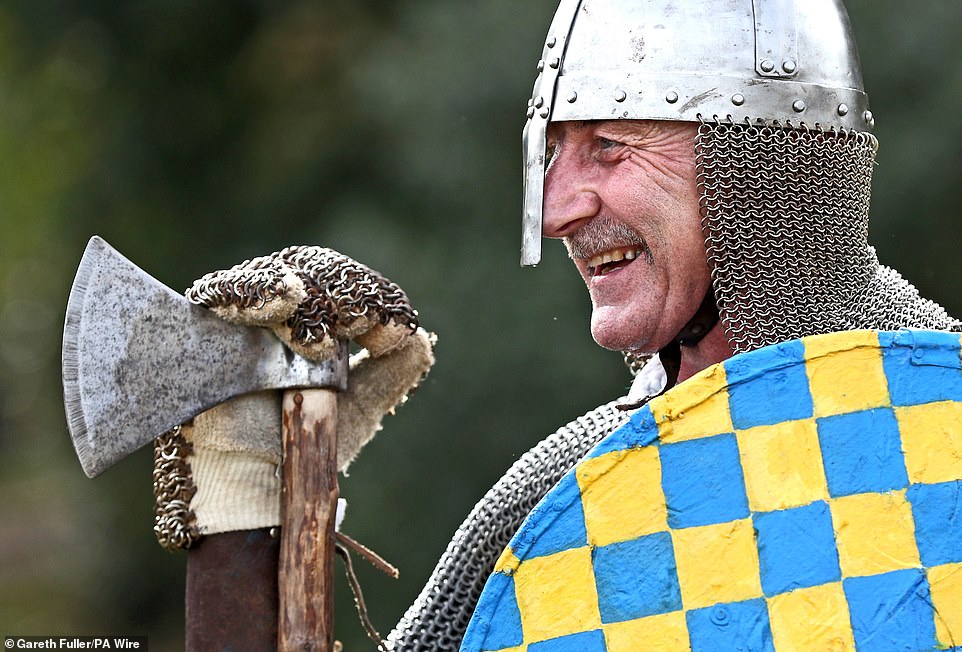 More than 600 soldiers clashed in a Battle of Hastings remake in East Sussex on Saturday. William claimed he was promised the throne by King Edward ten years earlier in 1056. After his invasion he changed the English court language to French 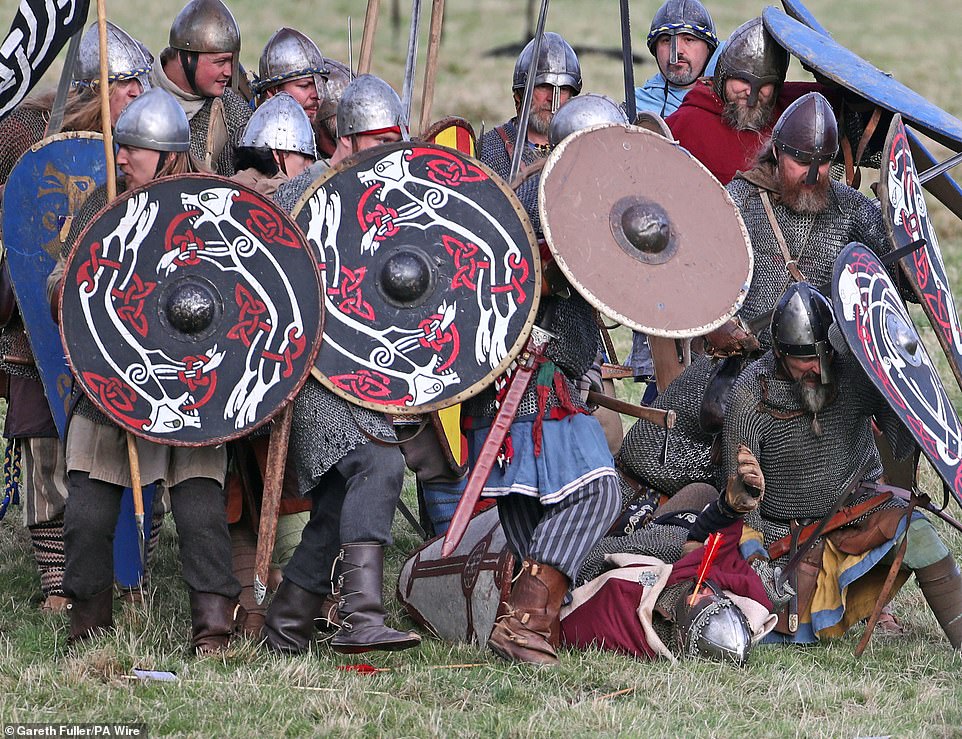 Thousands of people turned out to watch the re-enactment of one of the most famous battles in history. But the English had the last laugh: when William died, his body was reportedly too fat to fit into his sarcophagus, a coffin which preserved his body. They forced his bloated corpse into the coffin, his bowels burst, and a horrible stench filled the French church