The long and winding road! Thousands queue from dawn for first day of Glastonbury after rail strikes forced them to camp overnight following hellish journey by bus or car to reach festival headlined by Sir Paul McCartney

Thousands of eager music fans have queued in traffic since dawn for the first day of Glastonbury after the chaotic rail strike forced many to camp overnight at the four-day Somerset festival.

Organisers told fans they could begin parking at the site from 4pm on Tuesday after trains and Tube services were disrupted for a second day running – forcing revellers to get to Worthy Farm early to beat the rush.

The festival’s main stage will not open until Friday, with headliner Billie Eilish set for the iconic Pyramid Stage followed by Sir Paul McCartney on Saturday and rapper Kendrick Lamar bringing the event to a close on Sunday.

However, DJs and live music is planned from today for eager fans who have arrived at the site early – as more than 200,000 people are expected to descend at Glastonbury over the next two days.

The founder of the Somerset festival Michael Eavis was pictured officially opening the gate to Glastonbury this morning marking the official start of the four-day music spectacular.

The festival is returning for its 50th anniversary after a three-year hiatus due to Covid-19.

Eavis and his daughter Emily were stood at one of the festival’s many entry points and clapped as the first attendees entered the site.

Eavis, 86, told those entering the gates: ‘This is going to be the best show in town.

‘Wait and see. You better believe it.’

Huge crowds of revellers were pictured sitting on camping chairs by metal railings as they secured their spot in line to the entrance of the festival.

Armed with camping gear and cool boxes, excited fans waited patiently as they queued to get in to the UK’s most-anticipated music event of the year as they were met with glorious 19C (66F) sunshine – a pleasant change from the usual rain that marks the start of the muddy festival. 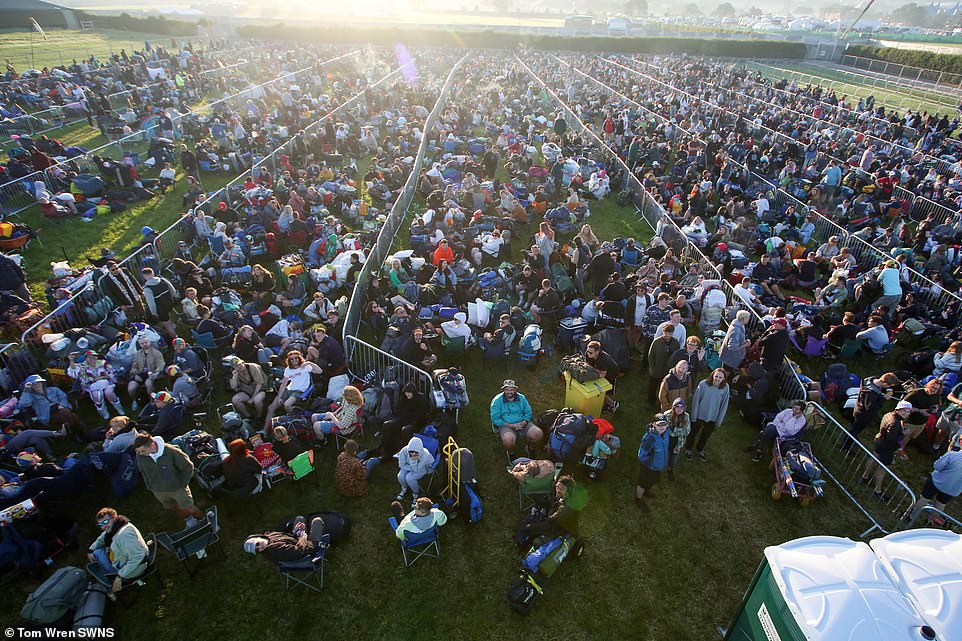 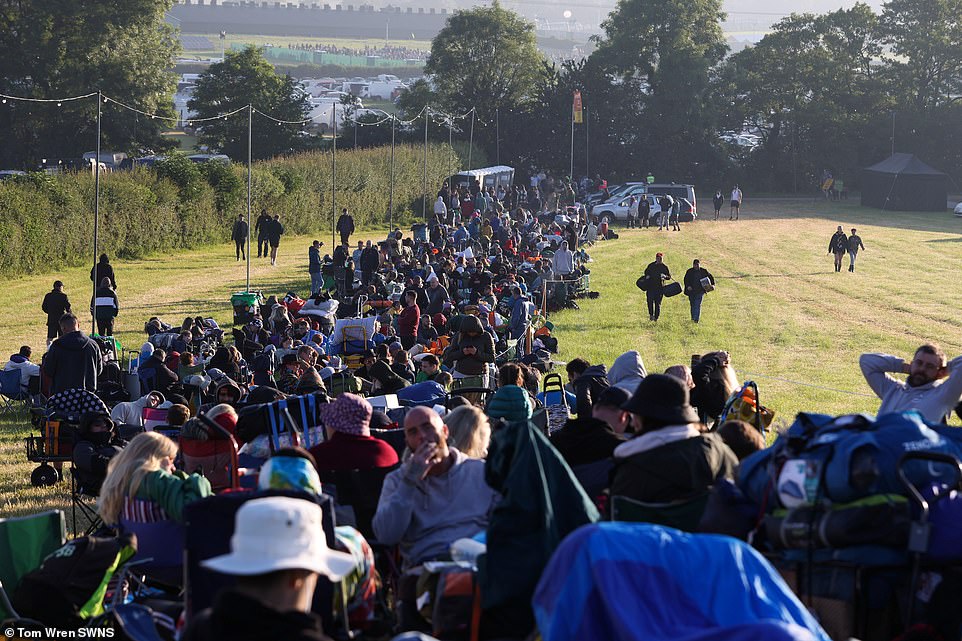 Armed with camping gear and cool boxes, excited fans waited patiently as they queued to get in to the UK’s most-anticipated music event of the year 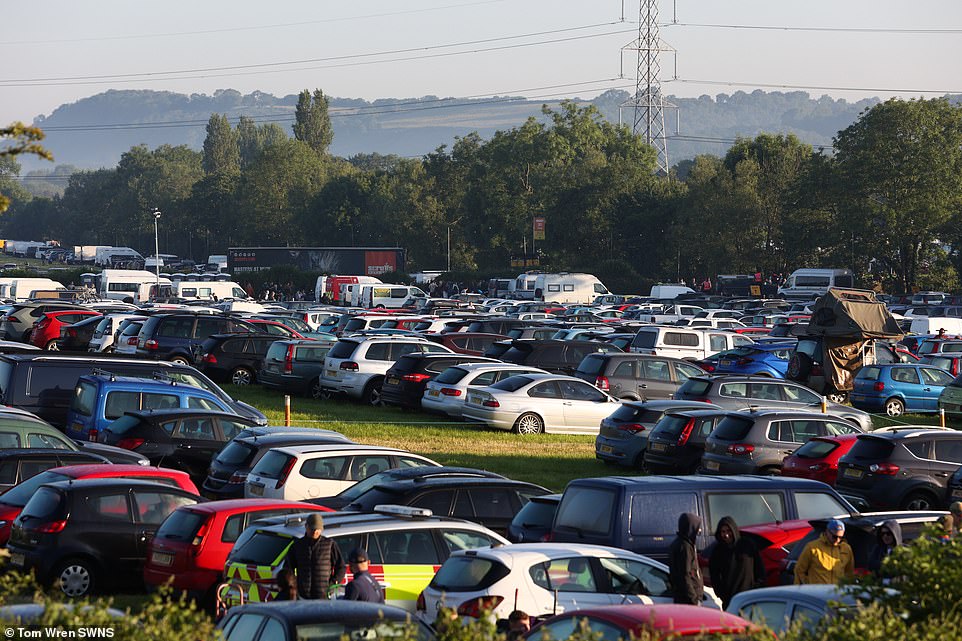 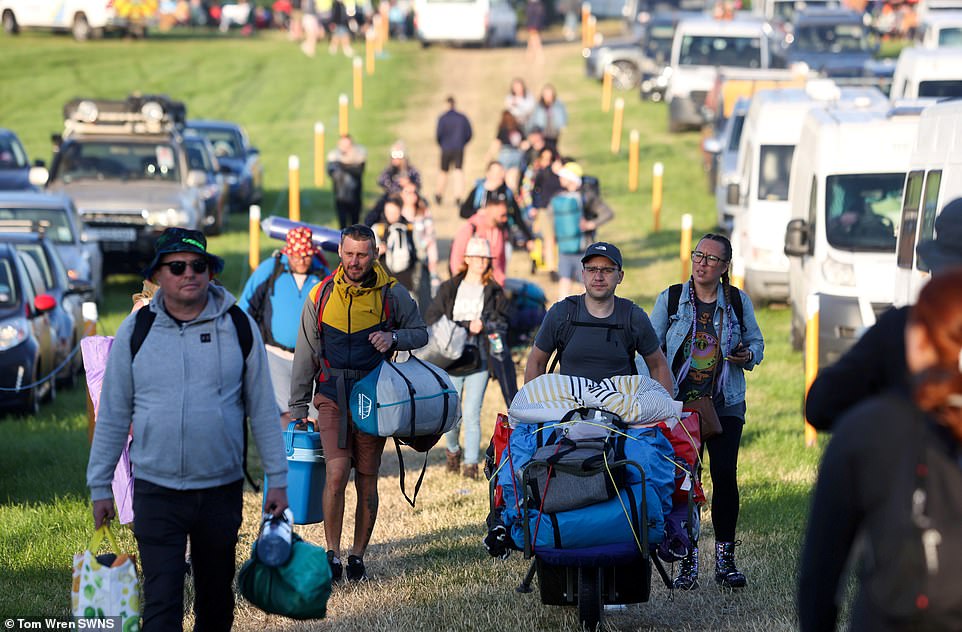 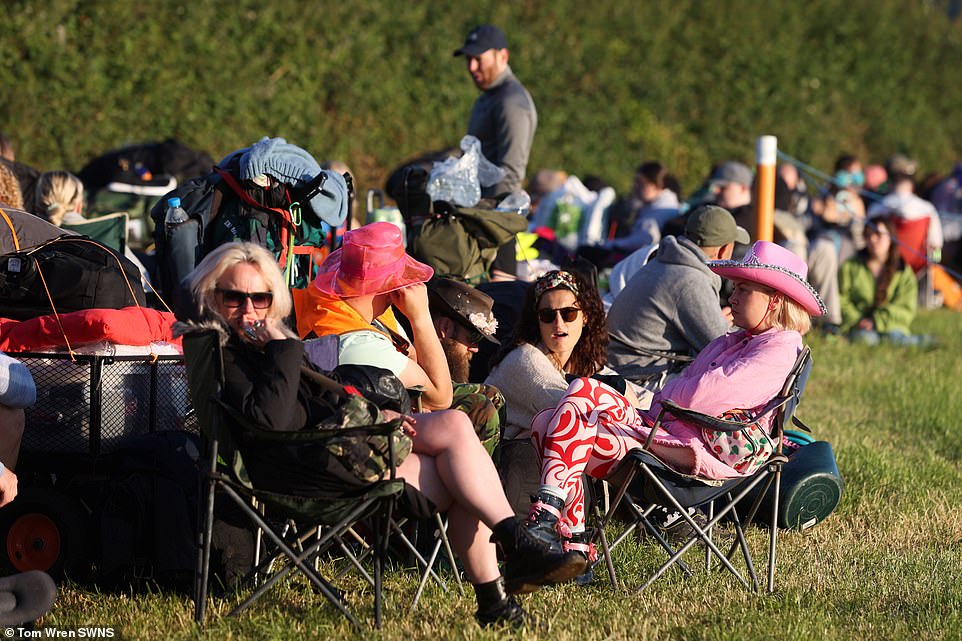 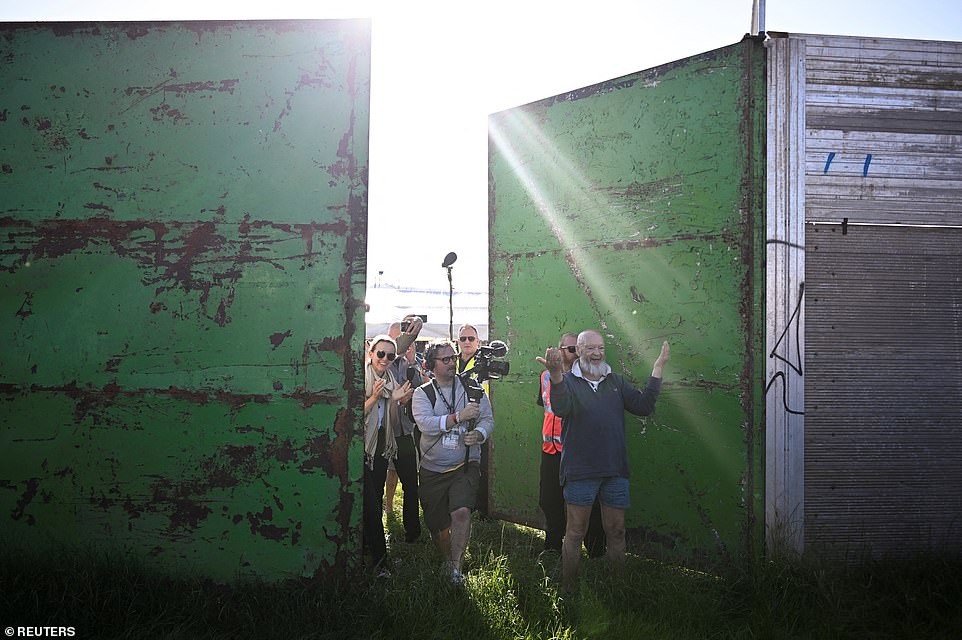 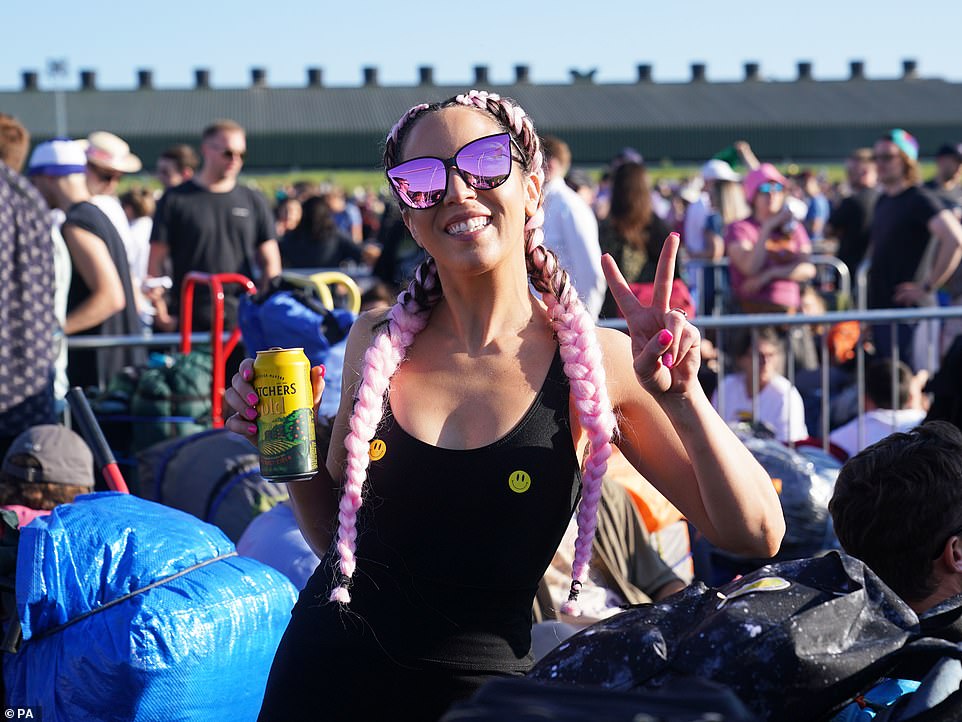 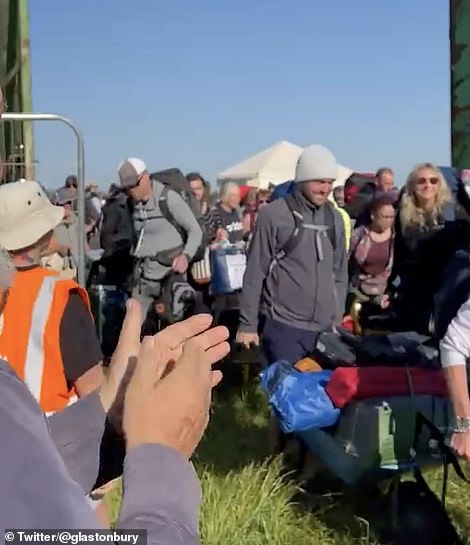 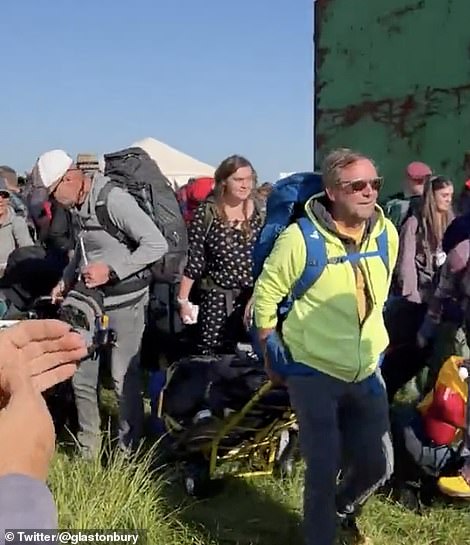 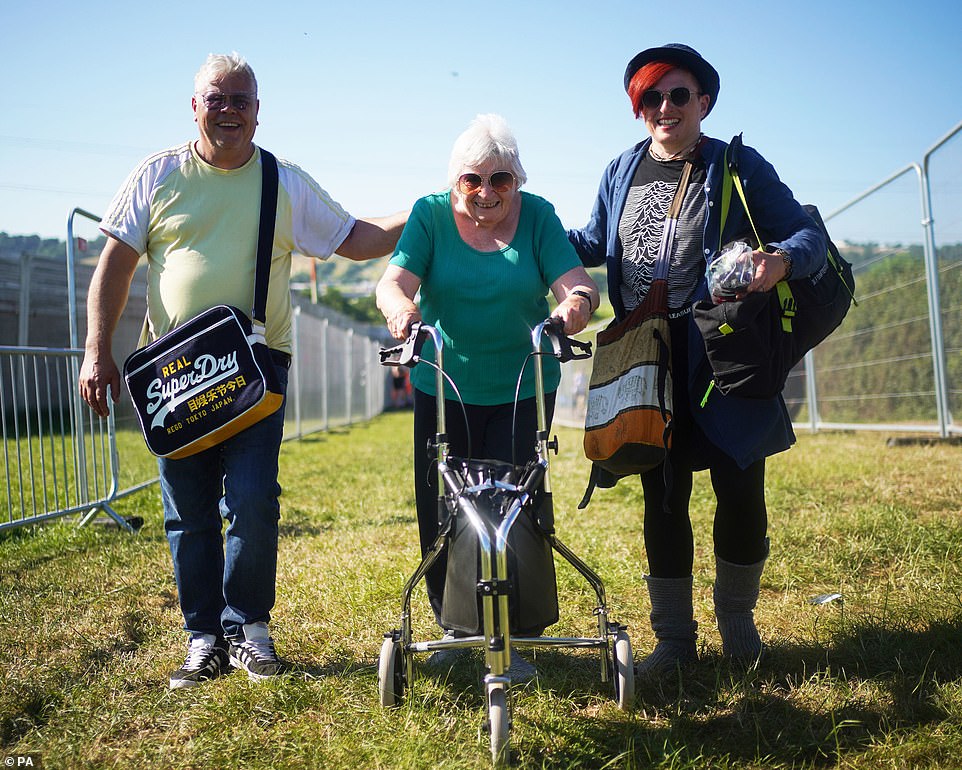 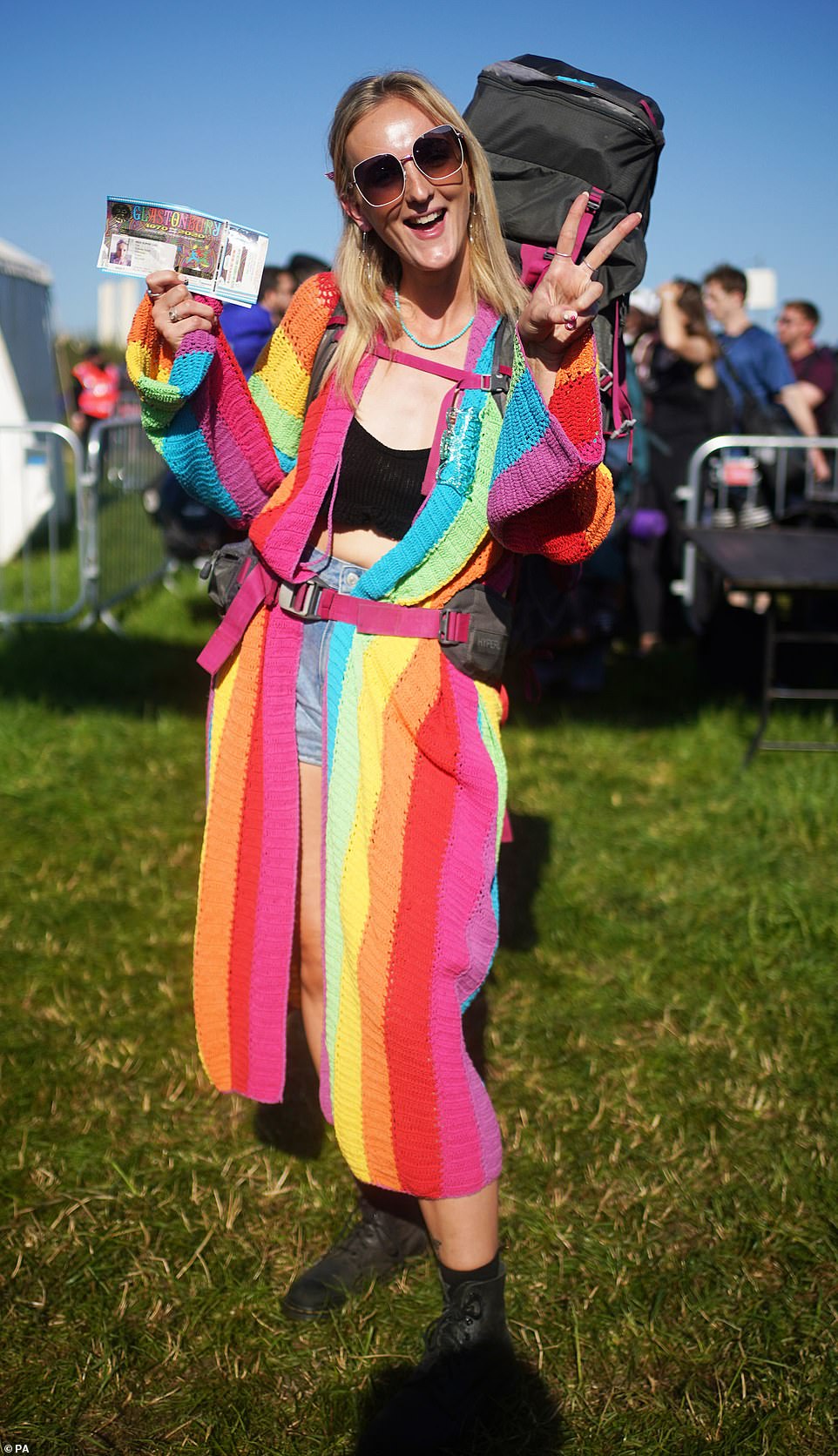 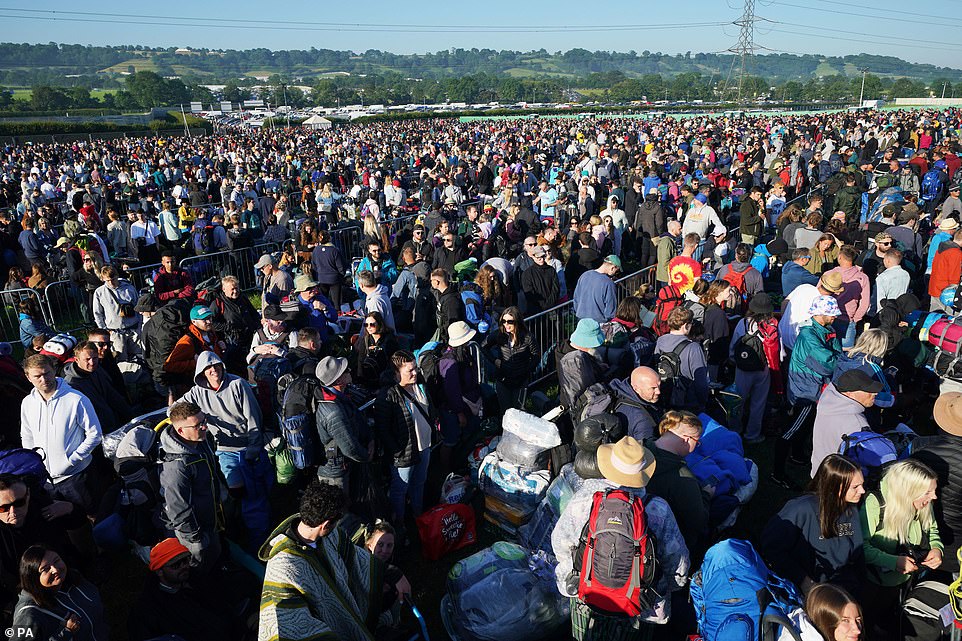 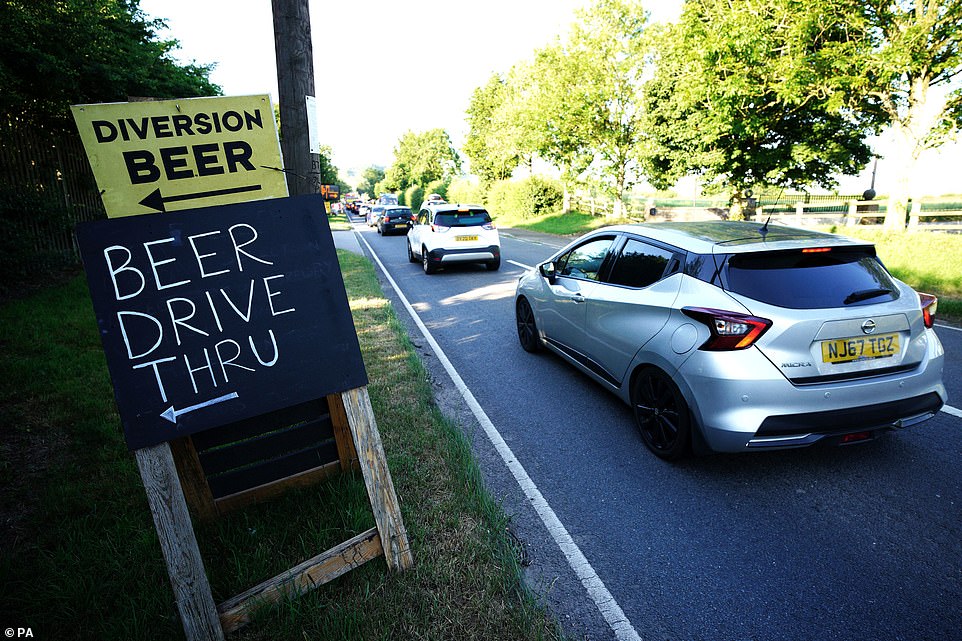 Despite, Glastonbury usually opening its parking facilities at 9pm the night before the first day of the music extravaganza, bosses allowed the car parks to open yesterday afternoon – but this morning roads to the site were gridlocked with traffic.

Organisers said: ‘There will be no entertainment or facilities other than toilets in the car parks and festivalgoers will be expected to remain in their cars until the festival gates open.’

Great Western Railway is hoping to maintain trains to Castle Cary – the nearest station – but has advised passengers to check for amendments before travelling.

A GWR spokesman said: ‘All we are expecting are festival workers, the site doesn’t open to the general public until Wednesday.

‘It was busy on Monday but most of the people who arrived were scheduled to get here early. Since then the numbers have been minimal compared to what we would see on a normal festival travel day.’

Festival-goers have been queuing since the early hours of Wednesday morning as many attempted to battle travel delays on their journey to Pilton in Somerset, amid three days of major rail strikes.

Shortly before the gates opened, radio host Jo Whiley said Glastonbury is the ‘ultimate festival’ and that Sir Paul McCartney’s headlining slot on the Pyramid Stage on Saturday night is a ‘very, very important and significant performance’.

The former Beatle, 80, will become the music festival’s oldest ever solo headliner when he takes to the stage this weekend.

Speaking to BBC Radio 4’s Today Programme, Whiley said: ‘Glastonbury is the ultimate festival, it’s a celebration of all the arts and it’s all about the human experience.

‘So yes, there are all these bands playing, there’s the main stage, everyone gets very excited about that, but it’s all about just enjoying this, just the amount of things I think you can enjoy when you get there… Over 100 stages, there are all different kinds of performances going on wherever, so you have to think of it as like a massive smorgasbord that you can go along and you can just keep tasting all these different things… circus acts, cabaret, music.

‘And everyone is just so friendly, so you make lots of friends, it’s just a wonderful experience.’ 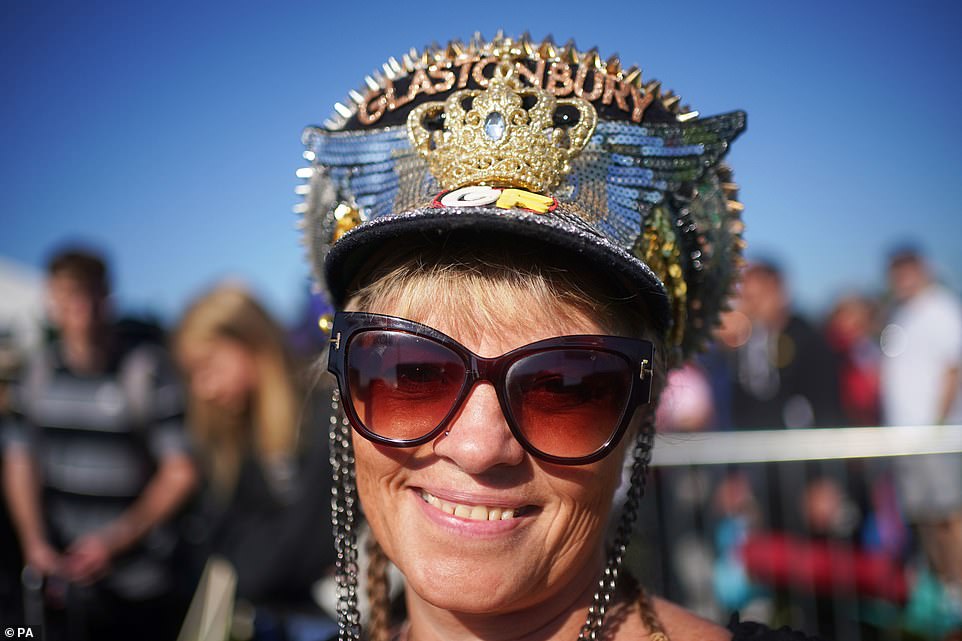 Wearing a sequinned hat that was dazzled with letters that spelt the word Glastonbury, revellers queued to enter the Somerset premises 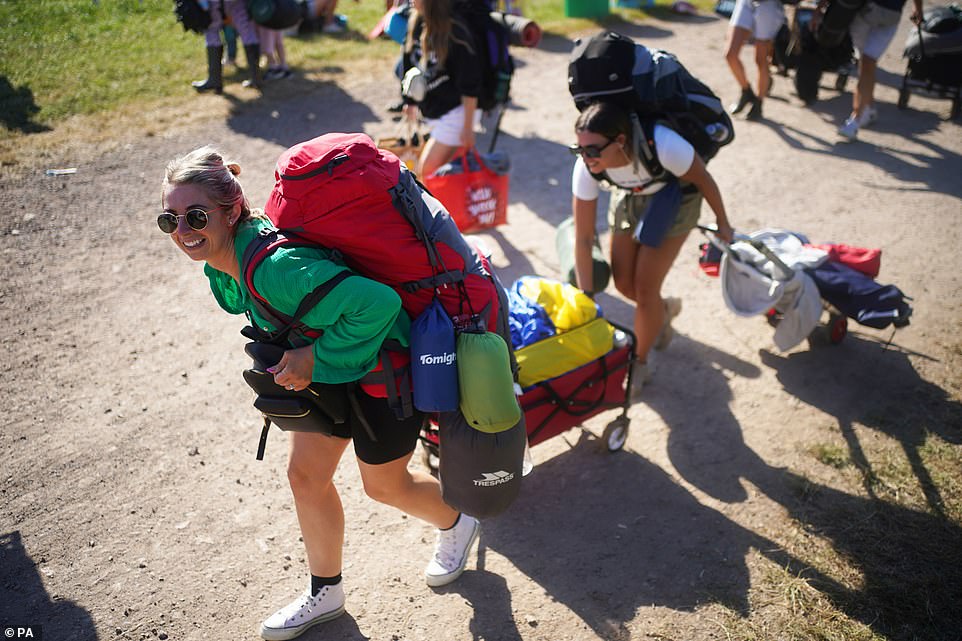 Fans arrived at the event carrying huge rucksacks and cool bags, while wheeling their possessions to the site 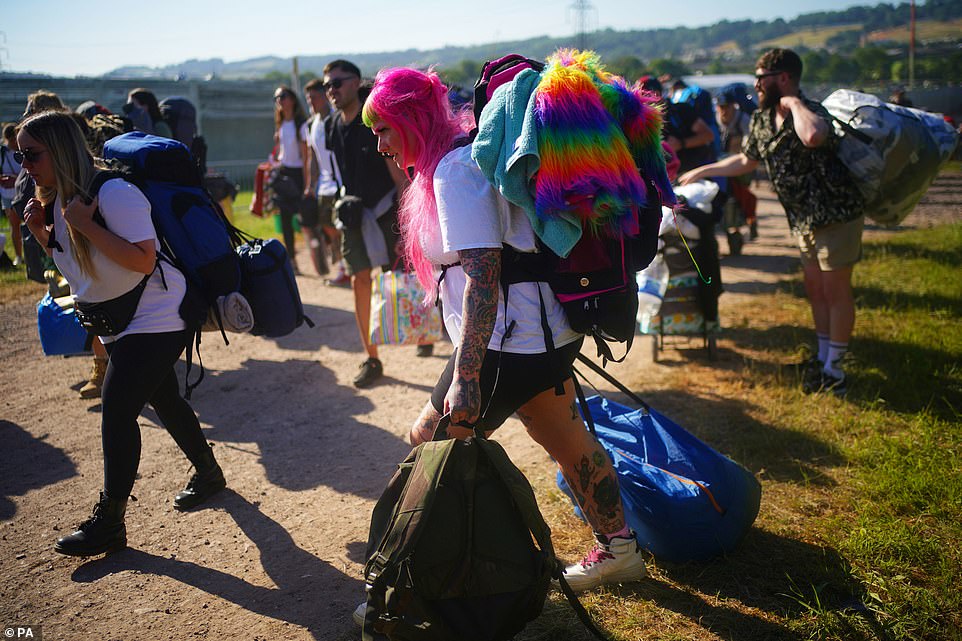 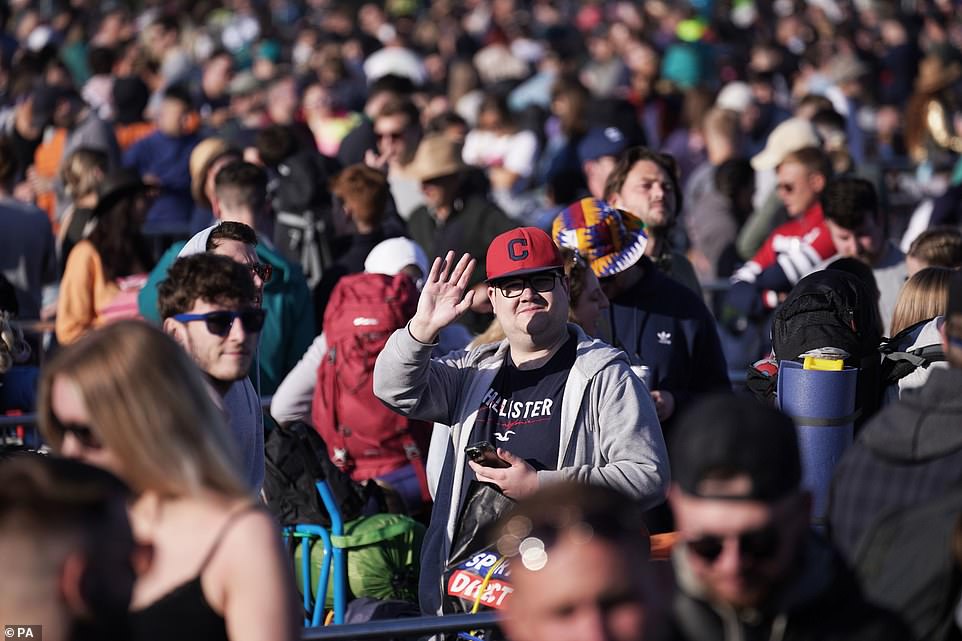 Pictured: People queue for entry on the first day of the Glastonbury Festival at Worthy Farm in Somerset 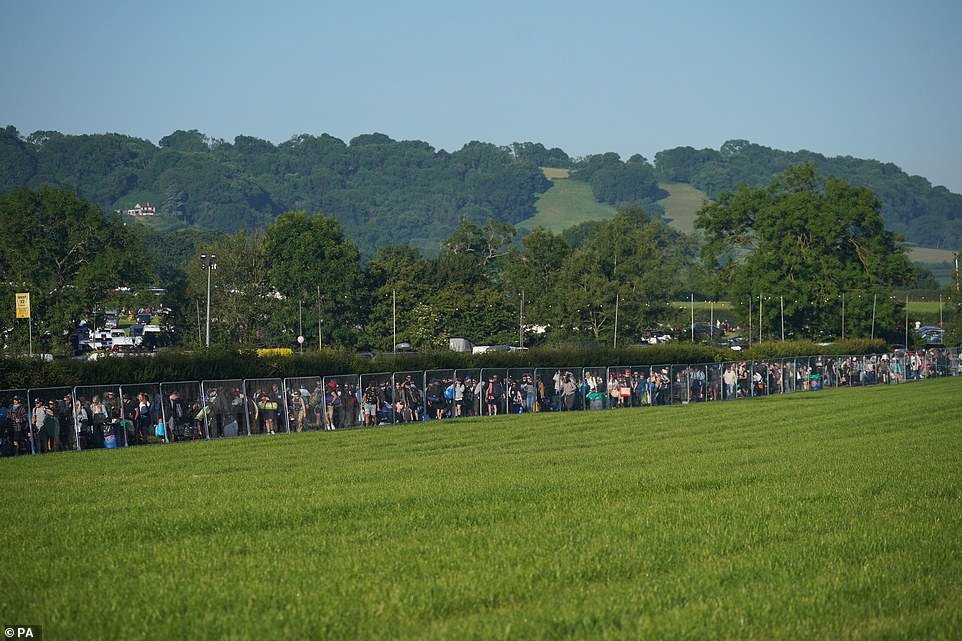 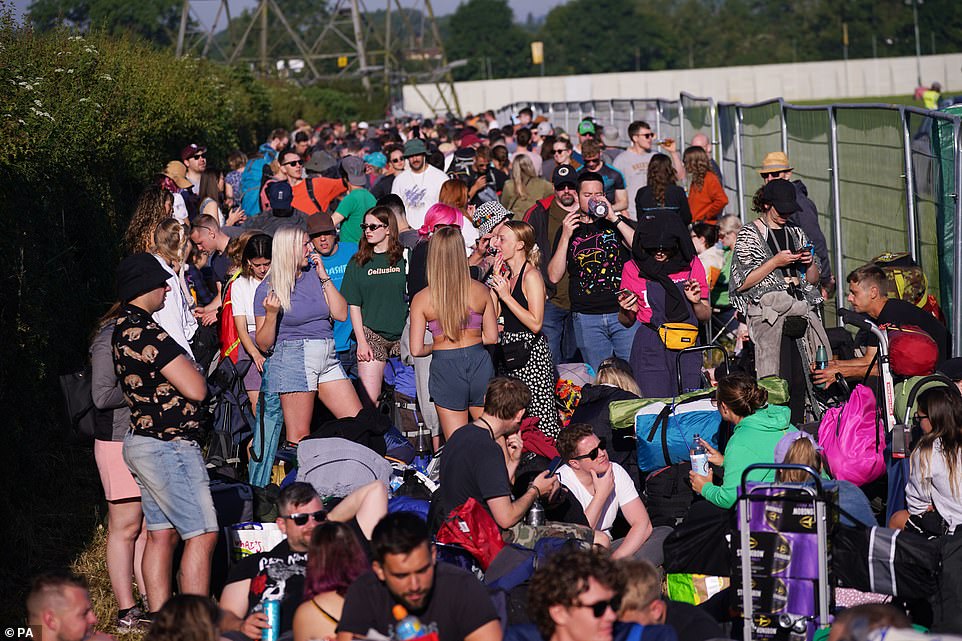 Dressed in shorts and wearing sunglasses and hats, music fans waited in line as they queued in glorious sunshine 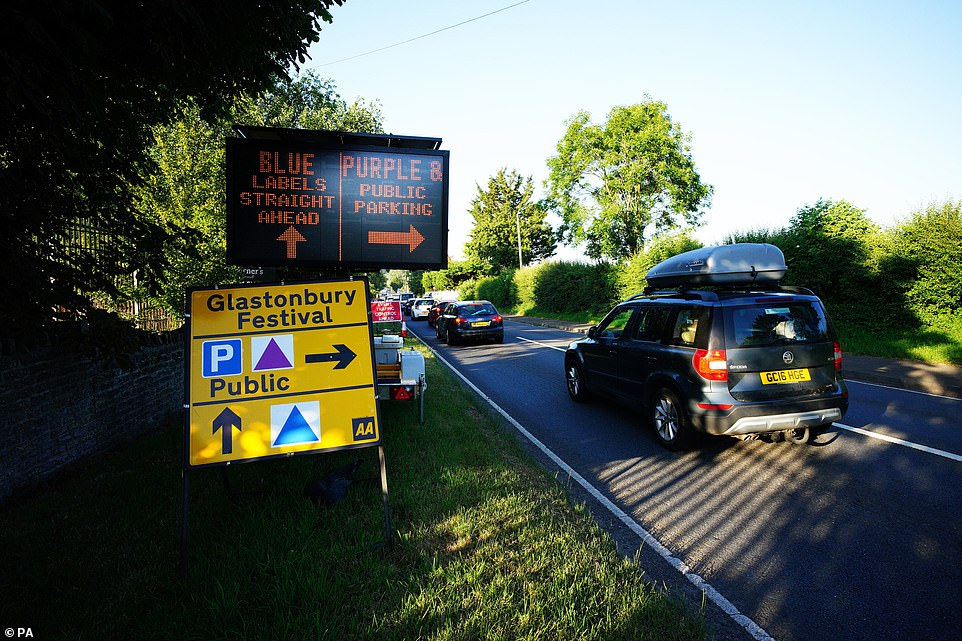 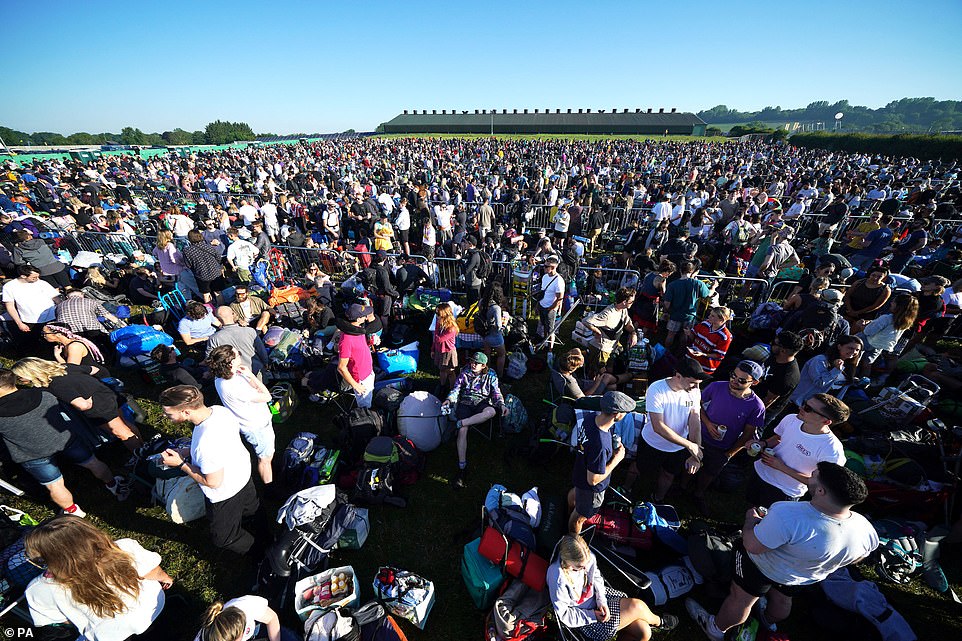 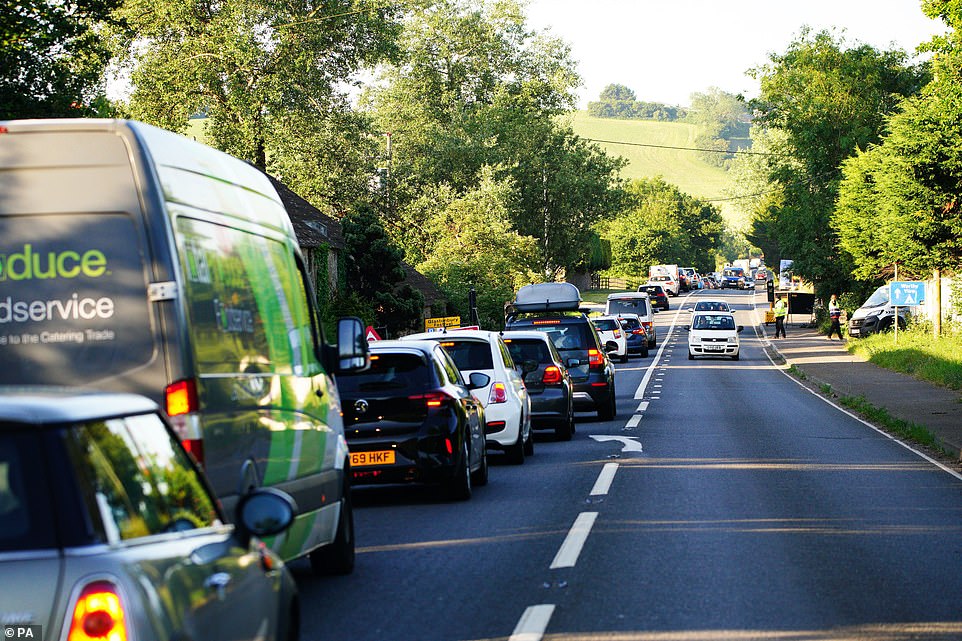 Traffic jams builds up around the famous Somerset site ahead of the Glastonbury Festival at Worthy Farm in Somerset.

On Sunday on BBC Radio 2 Whiley will present live from Pilton, 7pm-9pm, including highlights from Diana Ross’ set on the Pyramid Stage.

She told BBC Radio 4 of Sir Paul that it’s a ‘very, very important and significant performance that will be happening then, it’s the greatest songwriter of all time from the biggest band, at the greatest festival in the world, it’s a big moment’.

Shortly before the gates officially opened at 8am on Wednesday, hundreds of Glastonbury attendees had already been queueing for hours with their bags and some said they arrived at the site in the early hours of the morning.

Mark Lawrie, 49, from Reading, who works for a sports charity, said he had arrived at the festival at 2am with his 18-year-old daughter Bethan.

‘We slept in the car for a few hours and joined the queue at 6am,’ he told the PA news agency.

‘This is our third time and it’s always brilliant. The moment you get here and start to see the tops of the tents, you get such a buzz.

‘It’s always such a positive atmosphere here, everyone’s just so nice to each other and friendly to each other, but I think after what we’ve been through the last two and a half years it’s going to be special.’

Ms Lawrie said the act she is most looking forward to is Billie Eilish, while her father said he is hotly anticipating Sir Paul McCartney.

‘When I was first a primary school teacher, I didn’t realise this but I lived next door to (McCartney) in East Sussex,’ he said. ‘One morning he was walking his dog outside and I had a hangover so I was in bed and didn’t go to say hello to him.

‘My parents will absolutely never forgive me for not having done that, so he’ll be amazing to see.’

Ahead of the five-day event, meteorologist Tom Morgan from the Met Office told the PA news agency, this year’s weather outlook promises to be ‘one of two halves’.

Temperatures could reach 27C at the 900-acre site – 9C higher than usual – in the lead-up to the world-famous event.

However, the mud synonymous with Glastonbury is still set to make an appearance, with showers and thunderstorms predicted from Friday onwards.

To the dismay of many festival-goers the event coincides with three days of planned major rail strikes over rail workers’ pay, leading to travel disruption for people making their way to Worthy Farm.

Just 60% of trains will run across Wednesday, with walkouts planned for Thursday and Saturday.