The country’s ‘trace, test and treat’ approach has been held up as a global model in how to curb the virus.

But over the weekend the capital and neighbouring Gyeonggi province – between them home to nearly half the 51 million population – banned all religious gatherings and urged residents to avoid unnecessary travel after a burst of new cases sparked fears of a major second wave.

The government had drawn up a special holiday on Monday with hopes of spurring domestic consumption. But as infections in the capital region increase, Health Minister Park Neung-hoo urged people to stay home and for residents in Seoul and nearby Gyeonggi province to avoid visiting other parts of the country for two weeks.

South Korea reported 197 new cases on Monday, taking its total to 15,515, its fourth consecutive day of triple-digit increases after several weeks with numbers generally in the 30s and 40s. On Sunday South Korea reported 279 new cases, more than double the 103 reported on Friday. 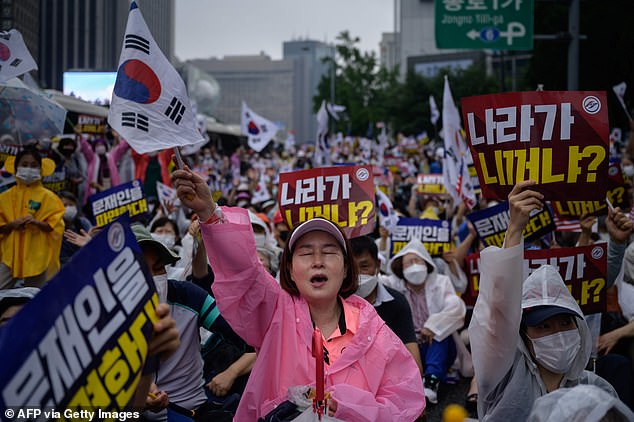 Members of pro-US conservative right-wing and religious christian groups wave flags and shout slogans during an anti-government rally in the central Gwanghwamun area of Seoul on Saturday, despite the latest coronavirus outbreak in the city and calls to avoid large gatherings

The KCDC – South Korea’s Centers for Disease Control – said 167 of the new cases came from the greater capital region. Health workers have been struggling to track infections, but churches have emerged as a major source.

The largest current cluster is centred on the Sarang Jeil Church in Seoul, headed by a controversial conservative pastor who is a leading figure in protests against President Moon Jae-in.

A total of 315 cases linked to the church had been confirmed so far, officials said Monday, making it one of the biggest clusters so far, and around 3,400 members of the congregation had been asked to quarantine.

Around one in six of the church members tested so far had been positive, ‘requiring rapid testing and isolation,’ said vice health minister Kim Gang-lip. 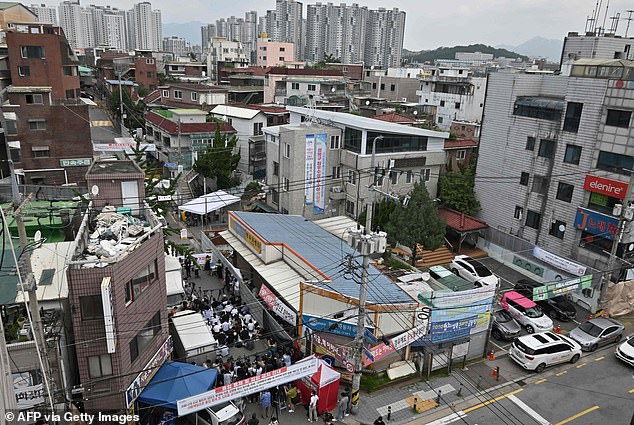 White tents (centre left) are set up outside the Sarang Jeil Church today, believed to be at the centre of the latest outbreak of coronavirus cases, to stop people from entering. Outside, the church’s lawyer holds a press conference of the Seoul church’s latest infection cluster 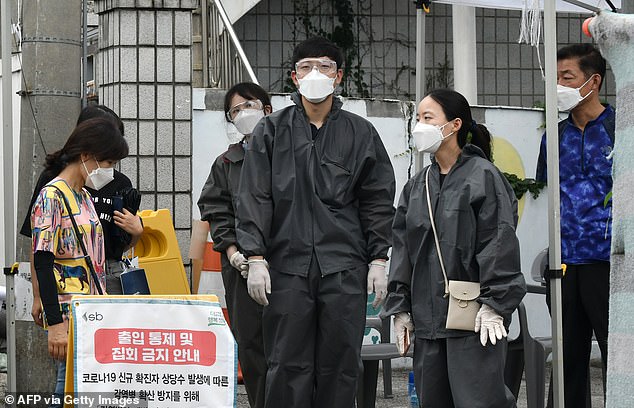 But a list of members provided by the church was ‘inaccurate’, he said, making the testing and isolation procedure ‘very difficult’.

The initial outbreak of the virus in the South was centred on the Shincheonji Church of Jesus, which is often condemned as a cult and was also accused of obstructing investigators.

Sarang Jeil’s leader Jun Kwang-hun was among the speakers who addressed thousands of right-wing protestors who rallied against Moon’s centre-left government in the heart of Seoul at the weekend, despite the outbreak and calls to avoid large gatherings. 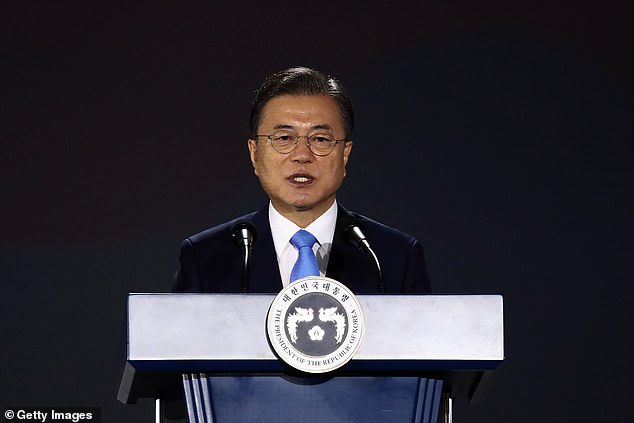 South Korean President Moon Jae-in speaks during the celebration of the 75th anniversary of the Liberation Day at Dongdaemun Design Plaza (DDP) on Saturday. On the same day, protests against the President were held in the capital city despite pleas to avoid large gatherings

The health and welfare ministry and the Seoul city authorities have filed two separate police complaints against Jun, accusing him of deliberately hindering efforts to contain the epidemic.

The leader of Shincheonji – to which more than 5,000 cases were linked – Lee Man-hee was arrested earlier this month for allegedly giving inaccurate records of church gatherings and false lists of its members to health authorities.

On Saturday, a National Liberation Day holiday in both Koreas, thousands of demonstrators participated in street protests against President Moon Jae-in’s policies, defying a ban on rallies in the capital.. 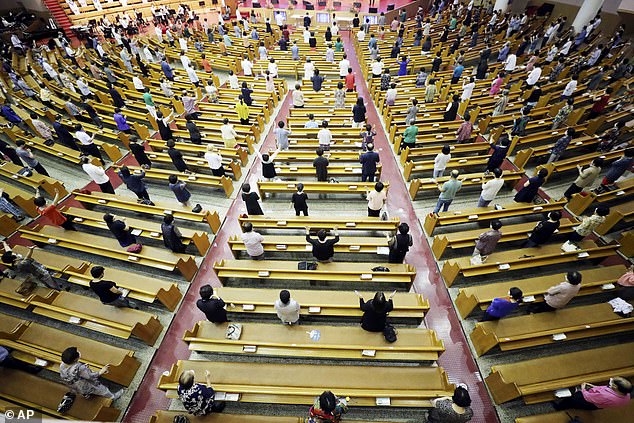 Christians wearing face masks while maintaining social distancing attend a service at the Yoido Full Gospel Church in Seoul, South Korea on Sunday. Some churches have been at the centre of the latest outbreaks in the country, and religious gatherings have been banned in Seoul and neighbouring Gyeonggi province

President Moon said the latest outbreak posed the biggest challenge to efforts combat COVID-19 since the large cluster of infections traced to the Shincheonji Church of Jesus, a secretive religious sect, six months ago.

President Moon warned of ‘stern and strong measures’ against ‘some churches,’ calling their behaviour an ‘unforgivable act that threatens public lives.’

Despite the latest outbreak, South Korea has been held up as an example of how to deal with the coronavirus, and with a population larger than Spain’s and a higher population density than that of the UK, France, Italy, Germany the U.S. and even China, it has seen far fewer cases and just 305 related deaths.