Russell Malcolm Watson was 17 when, in 1942, he ran away from his parents’ home in Elwood and joined the Navy.

By the time his mother tracked him, demanding he was sent home, he was away at sea, a gunner aboard the Royal Australian Navy’s Q Class destroyer, HMAS Quiberon. 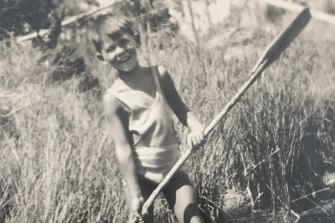 A sister dubbed him “Peter” when he was a baby and it stuck.

His would be an adventurous war – the Quiberon came under air attack in the Atlantic and the Mediterranean, destroyed a German submarine with depth charges, helped destroy an Italian fleet, patrolled the African coast and the Indian Ocean and saw significant action against the Japanese.

Young Watson – who also served on the corvette/minesweeper Kiama and the destroyer Arunta – was the youngest aboard, and got the nickname “Twinkle”.

Ships and the sea remained with him: only a few weeks ago, he was still using his binoculars to study ships in Port Phillip Bay from his room at the Elanora Aged Care Home on Brighton Beach.

Mr Watson was never known by his given names. 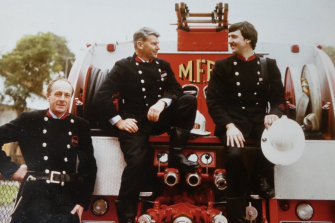 Peter, centre, was a fireman for 30 years.

A sister dubbed him “Peter” when he was a baby. It stuck. His best mate from childhood called him “Watto”.

Mr Watson could have lived a life of ease.

His son Russell (Peter) was made of different stuff.

Having fought his war he signed up, aged 28, as a fireman with the Melbourne Metropolitan Fire Brigade.

He fought fires for the next 30 years. 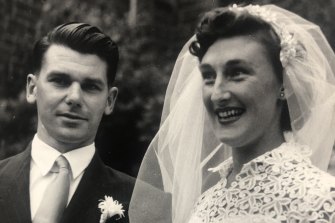 Peter and Jean at their wedding in 1955. 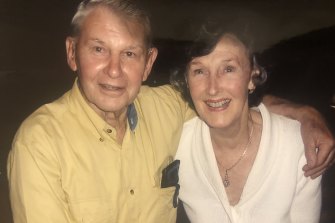 Peter and his wife Jean.

And like the enduring friendship with the boy who called him Watto and the shipboard mates he made during the war, he retained tight friendships from the fire brigade for the rest of his life.

In 1955, he married a young Elwood woman named Jean Holthouse.

In 1960, the couple and their children, Trevor, aged 5, and Pam, 2, moved to a large block of land in Sandringham.

There, Mr Watson set about establishing a sustainable life for his family. He kept bees for honey and mead, grew fruit trees and vegetables and raised hens.

He swam in the sea every day, and, devoted to voluntary service, quietly cleaned up rubbish along the foreshore. 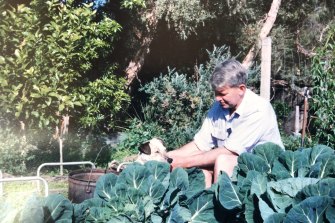 Peter in his beloved garden in Sandringham.

The family loved camping. Jean’s sister married at Cape Bridgewater in south-west Victoria and settled on a farm, making the area the family’s favoured camping spot.

Mr Watson never lost his love of a garden. In his 70s, he cleared a block close to his home and turned it into a native garden for the community. He spent 25 years caring for it, and his daughter Pam was married there.

His son Trevor, also a fireman, died of mesothelioma in 2007. 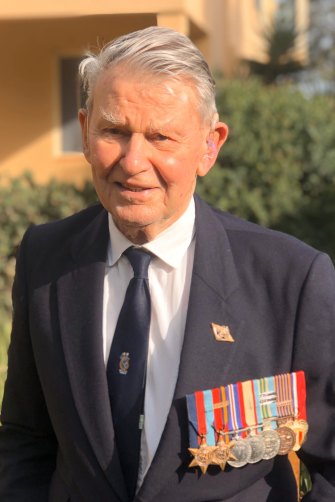 Peter with his war medals on Anzac Day this year.

Aged 93, still living among his fruit trees and vegetables, with one elderly chook left on the block, Mr Watson agreed to enter the aged care facility where his wife Jean lived with dementia. She died on October 10 last year.

When lockdown came, he used his binoculars to watch the children waving to him from the beach, and kept in touch via Skype.

But even this self-sufficient man couldn’t survive COVID-19.

The Age welcomes submissions from families or friends who would like to pay tribute to those taken by the pandemic for inclusion within this series.