Beijing: Vladimir Putin started these Winter Olympics Games standing maskless over the opening ceremony. He will end them with a gold medal match in his favourite sport, ice hockey.

In between, the Russian President has overseen a militarisation of the Ukrainian border, bound China and Russia together in an “unbreakable friendship”, celebrated 27 Olympic medals and seen the consequences of a Russian doping program crush a 15-year-old girl.

This was China’s Olympics, but Russia has dominated it. 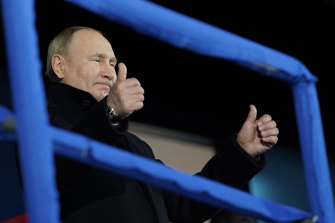 Moscow set the tone early with a remarkable statement. For the first time in centuries, Russia got China to wade into a dispute outside the Chinese sphere of influence – Europe. Beijing backed Russia’s determination to stop NATO from expanding. In exchange, Putin and Chinese President Xi Jinping declared they were on a unity ticket on Western interference in human rights and their political systems. They slammed the politicisation of sports in a statement that made this the most political Olympics in decades.

Jakub Jakobowski, a senior fellow at the Centre for Eastern Studies in Warsaw said Russia and China shared a common goal.

“They both believe the West is falling, that it is in constant crisis, and this gives them a chance to change the status quo,” he said. “They believe they have a chance to be the leaders in changing this status quo.”

Putin’s actions since then have overshadowed Xi’s Olympics. The escalation, shelling and false flags that have dominated tensions on Ukraine’s border have hung over every day of these Games, despite Russia pledging to honour the Olympic peace truce at the United Nations. With one day to go before the closing ceremony in Beijing, the United States and Australia are now warning an invasion of Ukraine is imminent.

In Beijing, Eileen Gu was the breakout star of these Olympics – winning three medals for her adopted China, but it was a 15-year-old from Russia collapsing on the ice after testing positive to a banned stamina-enhancing drug that was its defining image.

The fate of figure skater Kamila Valieva and the expected invasion of Ukraine seem worlds apart but they are linked by Russia’s aggressive pursuit of its national interest and the international community’s appeasement.

Russia was banned for four years from international sport in 2019 for state-sanctioned doping, only to be allowed back in a year later by the International Olympic Committee. It now sits second on the overall medal tally as the Russian Olympic Committee (ROC). Tchaikovsky plays on the podium in place of the national anthem but Putin still personally congratulates his stars.

On Friday, he sent a message to Anna Shcherbakova, who beat Valieva to gold. “You gave a brilliant performance on Beijing’s ice, showing high class and a huge creative potential,” he told the 17-year-old. “A decent award for your hard work, persistence and determination.”

Rink side was Filipp Shvetsky, a doctor who was suspended for four years from international sport for supervising a doping regime. Behind the stands was Valieva, tears streaming down her face, after soaring so high and then falling so low as the weight of a positive test to the banned drug trimetazidine weighed on her.

Valieva may have failed but Russia had its champion. Now it has its sights set on Ukraine. US President Joe Biden said on Saturday that the pretence is being sought for an invasion.

“We have reason to believe the Russian forces are planning to and intend to attack Ukraine in the coming week, in the coming days,” he said.

“We believe that they will target Ukraine’s capital, Kyiv, a city of 2.8 million innocent people.”

We have seen this before. In July 2014, Russia annexed Crimea after what it labelled as attacks by Ukrainian’s on pro-Russian separatists. Sanctions on Moscow followed, but almost a decade on they have done little to dampen the appetite of Putin to take back more territory he sees as his own.

The US State Department claims Russia is going to fabricate attacks by the Ukrainian military on Russian speakers as a pretence for war. Russia has denied those claims but some 190,000 troops on the Ukrainian border – the biggest military build-up in Europe since World War II – does not suggest it is clamouring for peace.

Putin will on Sunday watch Russia against Finland in the ice hockey gold medal match. The final act in a two-week extravaganza that had Russia beating the United States to the final of a sport it claims as its own. 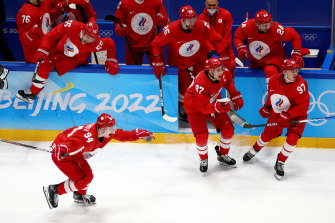 Team ROC skate onto the ice to celebrate its victory over Sweden in the men’s ice hockey semifinal at the Beijing Olympics on Friday.Credit:Getty Images

Xi’s China finishes these Olympics with more medals than ever before, a COVID-free Games and a much-needed surge in consumer spending. Russia finishes it being the centre of attention.

“When we look back at these Games, we won’t be remembering gold medals,” said Noah Hoffman, a US cross country Olympian in 2014 and 2018.

“We are going to remember that they were used to bolster two different authoritarian regimes.”