South Australians are being urged to start wearing masks after 17 locally acquired coronavirus cases were detected in Adelaide, raising fears the city could be on the cusp of a significant outbreak that could overwhelm its contact tracing team.

The cluster has a number of parallels to the start Victoria’s second wave, as it is suspected it may have been seeded by a man who worked in hotel quarantine, and has already spread to other high-risk workers. 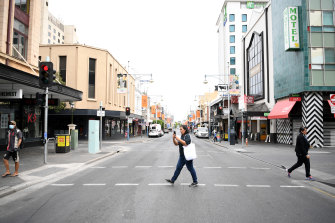 South Australian residents are being urged to get tested after the latest COVID-19 outbreak.Credit:Getty Images

"This is this is very much deja vu. This is very similar to what happened in Victoria," said Adrian Esterman, an epidemiologist at the University of South Australia.

He said 15 of the new cases were within one large extended family and infections had been reported in those working in places considered high-risk locations for spreading the disease, including a nursing home and a prison.

There were 655 deaths when the virus made its way into dozens of Victorian aged care facilities after escaping from two of Melbourne's quarantine hotels.

The coming days will be crucial in establishing if South Australian authorities will be able to contain the surprise outbreak, which represents the first cases of community spread of the disease in the state since April.

"Masks are good, especially indoors – and it's something that does't impact on the economy, but it does slow the spread," Dr Duckett said.

"It's one of the things we should be doing quickly."

On Monday morning South Australia Police Commissioner Grant Stevens said the state could have to return to lockdown again, reinstating restrictions similar to those introduced nationwide in March and April.

"But that is worst-case scenario and it's not a decision that has to be made right now," he said.

South Australia is reportedly adopting the “third ring” strategy of isolating cases, close contacts and contacts of close contacts, a resource-hungry measure introduced in Victoria at the end of the state's second wave.

Professor Esterman said while South Australia had a strong public health team, the contact tracing team was significantly smaller than Victoria's, which is more than 2000-people strong, and would be challenged if the cluster was to grow further.

"If they crack down on it now, they will be fine. If it gets too much bigger, we'll be struggling to have enough contact tracers."

South Australia closed its border to the rest of Australia in March, requiring most people to quarantine for 14 days on arrival, and later banned almost all arrivals from Victoria, even if they were South Australian residents.

After easing other restrictions, South Australia was due to drop its hard border with Victoria on December 1.

But on Monday, South Australians found themselves on the other end of border restriction measures, as the Northern Territory declared South Australia a hot spot, effective immediately. Anyone who arrives in Tasmania from South Australia will also have to isolate, following in the footsteps of Western Australia, which was the first to introduce new restrictions.

The NSW and Victorian premiers have signalled their intentions to keep their borders to South Australia open for now.

"Victoria has gone through three months of severe lockdown with an enormous toll on the Victorian economy and mental health. The last thing you need is someone from South Australia coming across and starting the whole thing again,” he said.

Other public health experts said it was prudent for the states to wait and see what happened in the coming days.

Former Queensland chief health officer Gerry FitzGerald said the big question was what had happened in the days people were infectious in the community until detected, and the immediate focus should remain on contact tracing and isolating those who may have been exposed.

“I suspect it's not going to stop at 17 [cases],” he said. “It’s probably a bit early to call for a lockdown because you don’t know how controllable it is.

"I’m sure everyone who has been in contact with these 17 people will be tested today and they'll know now whether it is 17 or 170 who are actively infected.

Professor FitzGerald said outbreaks from hotel quarantine would remain a risk until there was a vaccine.

"There's been outbreaks in infection control wards in hospitals," he said. "It's really hard and these breaches can happen really easily. It’s a tricky virus."