A northern Victorian man whose house burnt down in the January 2020 bushfires says it’s hard to find the words to thank volunteer tradesmen from Melbourne who have built him a new home.

Mark Brooks now regards builder Jair Town and electrician Rob Brown as his sons after they drove more than 400 kilometres there from the city, and 400 kilometres back, about every second weekend for the past year. 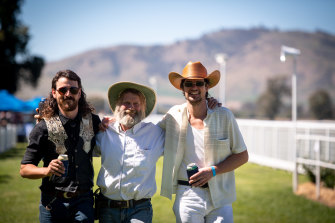 Rob Brown, Mark Brooks and Jair Town at the races on Saturday.Credit:Eddie Jim

Fourteen months ago, The Age photographed Mr Brooks, 62, with his daughter Kylee in the wreckage of the house he had built over 37 years, in the Upper Thowgla Valley, about 130 kilometres east of Wodonga. His brother Greg’s house, which was nearby, was also destroyed.

At first, after the blaze, Mr Brooks slept outdoors on a blow-up mattress and more recently in a caravan, but by this winter, he will move in to the new cottage that the volunteers have made of Colorbond steel, built over an existing shed.

“It’s hard to find words to say how I feel, about what they have done,” Mr Brooks said.

“It’s like, I was in a real dark place, and all of a sudden these blokes brought me light. 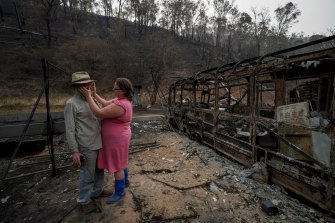 Mark Brooks and his daughter Kylee in front of the burnt out property in January last year.Credit:Eddie Jim

“They just make me positive again, determined. They just lifted my life.

“Without them, I’d be still in a rut, trying to work out what I’ve got to do.”

Mr Brown, 33, the electrician, from Diamond Creek, said on the March long weekend, one year ago, he was in Corryong as a volunteer, helping rebuild fences destroyed in the fires.

He heard that Mr Brooks needed wiring done on his remaining shed, and drove out to visit him.

Asked why they’ve done the work, Mr Brown says, “It’s just something we were prepared to do. We’d hope that if we were in the same strife, someone would give us a hand.”

The pair started regularly camping and working on the property on weekends, enjoying being out in the bush and bonding with “Brooksy” over their mutual love of music, building and inventing.

“He’s a very easy guy to get along with. He’d give you the shirt off his back,” Mr Brown said. “He’s a very nice guy.” 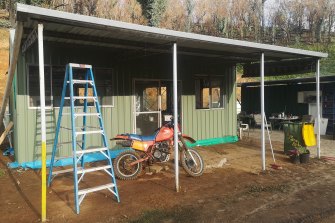 The cottage has kitchen and bathroom facilities, and living and sleeping areas.

Many people, including concreter Richard Romance, who laid the floor, and stonemason Brad Bannan, who made the bluestone fireplace, donated labour and materials to the structure.

Plaster was supplied by Vitale and Sons and labourers from by Mr Town’s building company, Town Projects installed it. Energy company RedEarth supplied a battery and solar panels for power.

This week, the charity Habitat for Humanity will install a flat built into a shipping container near Mr Brooks’s cottage, which his brother Greg, who has emphysema and has been staying in Wodonga, will stay in.

At the Towong races on Saturday, it felt natural for Mark Brooks to invite Mr Brown and Mr Town and their friends to share his table under the elms.

“They’re my adopted sons now. I’ve got three daughters. Now I’ve got sons. I want to share the rest of my life with them.

“These guys are real. There’s no bullshit about them.”

After the bushfire trauma, Mr Brooks said going to the races, as he has, on and off, since he was 14, did him good.

“I think that if you don’t get out and just be normal and find freedom, you’re never going to taste reality again,” he said.

“If you stay at home, you’re stuck in your rut. It feels like a brand new day and a brand new world.”