One of the top negotiators between the Taliban and the Afghan government says she was on the brink of signing off on a peaceful transition deal when president Ashraf Ghani fled Kabul on the weekend, leaving her angry and fearful for the future of women, minorities and her country’s economy.

Fatima Gailani, a key member of the Negotiating Team of the Islamic Republic of Afghanistan in Doha and a former spokesperson for the Afghan resistance against the Soviet Union, said she was dismayed by the collapse of Kabul and its leadership. 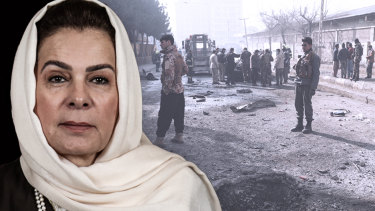 Fatima Gailani came back from retirement to help negotiate Afghan peace with the Taliban.

Gailani said that after almost a year of negotiations, a peace treaty was within reach, but now she is in the dark about the new regime’s approach to human rights and fears the new nation will not survive without foreign aid.

“Everything was going so well, and we were here, back and forth, talking to the palace and the Taliban,” she said in a phone call from Doha. “We were just discussing the list, and then oops, the President has disappeared. For God’s sake.”

“Everyone is shocked, including the Taliban. They didn’t think it would happen this quickly either. I mean they prepared to go and break a concrete wall and when they got there, it was a paper wall. They just had to poke their finger through.

“I’m talking to you now as if I am in a dream as if it can’t happen. It cannot be true. But the bottom of the story is that it is the truth.”

“We were just discussing the list, and then oops, the President has disappeared. For God’s sake.”

The Taliban on Tuesday night gave the first outline of how it planned to rule Afghanistan after sweeping through the country’s provinces since May to take the capital on Sunday. 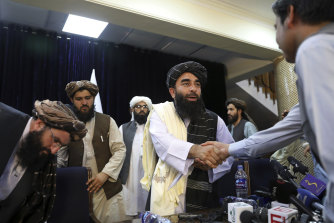 The Taliban have a polished communications team now. Its spokesman Zabihullah Mujahid shook hands with a journalist after his first news conference in Kabul on Tuesday night, Credit:AP

Taliban spokesman Zabihullah Mujahid said the new Afghan Islamic Emirate was “committed to the rights of women within the framework of Sharia”.

The temperate rhetoric suggests the Taliban are open to compromise. But the actions of some of their members over the past six months in the provinces reveal parts of the organisation remain committed to fundamentalist principles.

In June in Takhar province, female midwives were banned from meeting with male doctors. In July, Al Jazeera reported that gunmen escorted female bank tellers from banks in conquered districts of Kandahar and Herat and told them they would be replaced by their male relatives. 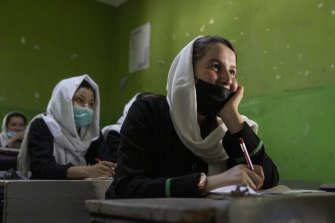 Only 20 per cent of girls in Afghanistan make it to the final years of high school. Credit:Getty

Elsewhere, the prospect of reprisals means many women are staying home, unsure of the new regulations. Until the Taliban were overthrown in 2001, women were banned from attending secondary school. Under the new regime, girls’ schools remain open, but female students at university in Kabul report being sent home. Twenty per cent of girls make it to the final years of schooling, but their attendance is threatened by religious and political upheaval.

“The real litmus test for girl’s education will be whether girls will also be allowed to attend high school and university and, if so, under what conditions,” said Martine van Bijlert, an analyst for the Afghan Analysts Network.

Much depends on how the new Taliban government will interpret Sharia from verses in the Koran. In particular, those involving “qawwamun” which can be interpreted as empowering men to be “maintainers” or “protectors” of women. There are also verses related to obedience, which can include restrictions on women showing their face outside their homes.

Sharia is a set of principles rather than a strictly defined code. It is up to the government and courts of an Islamic country to interpret how it can be applied. Egypt, Indonesia and Iran are among the more than a dozen countries that have variations of Sharia across their legal system.

Gailani said she had lost her faith in the promises of Afghan and foreign leaders long ago.

“I’m mature enough to believe talk when I see it happening,” she told The Age and The Sydney Morning Herald from Doha. “As you say it in English: walk the talk.”

“The truth is that [the Taliban] have taken the country. They can do whatever they like. We have lost our leverage. But my hope is that they will put their steps forward.”

The 66-year-old said the Taliban faced a different Afghanistan from the one it last ruled two decades ago. “Never in the history of Afghanistan have we had so many well-educated well-informed, capable women,” she said.

“It has to be accepted that this is an asset for this country, not a problem that they have to deal with.”

Gailani said she was still optimistic that she could negotiate with the Taliban and that Mullah Abdul Ghani Baradar, who is expected to be named the new Afghan president, was a considerate leader.

“He is extremely polite, and I never felt for one second, in his presence, that I was ever sensitive about my gender,” she said. “But no one can drag a country alone.”

The Taliban have spent two decades in the wilderness learning, adapting and finessing its own messaging. The guerrilla military outfit now communicates via WhatsApp and Twitter, operates a slick website, holds press conferences and said on Tuesday that it would continue to welcome international scrutiny.

But it comes with a caveat borrowed from the Chinese Communist Party’s style of media management.

“They can critique our work, so that we can improve,” said Mujahid. “[But] Islamic values should be taken into account. The media should not work against national unity. When it comes to ethnic differences, religious differences and hostilities, they should not be actually promoted by the media, they should work on the country for the unity of the nation.”

The same guarantees have been given to other minorities, former government employees or political activists now fearing for their lives or attempting to scramble onto the last flights out of Kabul.

Jesuit priest Jerome Sequiera said from Kabul that he and his colleagues were in hiding after attempting to leave the country on Tuesday.

“They have the list of all organisations and profile too. In some places, they have started door-to-door enquiries about the personnel of the organisation,” he said.

“While dragging my luggage in the midst of the chaotic crowd, the only thought stuck me was this: Did we, the international community invest so much and established so much in the last 20 years, to hand over to Taliban in a matter of days?”

Gailani said the reality was the economy would collapse without foreign aid.

“Unfortunately, Afghanistan cannot live one day without foreign aid. We will need it until a potentially rich Afghanistan will stand on its own,” she said. “Which means we have to secure a few universal rights from this future government.”

The Taliban have pledged it will wean the country off the opium trade that has brought it millions in revenue, but its war-torn infrastructure will require major foreign investment for years to come.

To pull in the money, the Taliban will need to show the world that it is a genuine political force, not just a military filled with religious zealots that found their way to the President’s Palace.