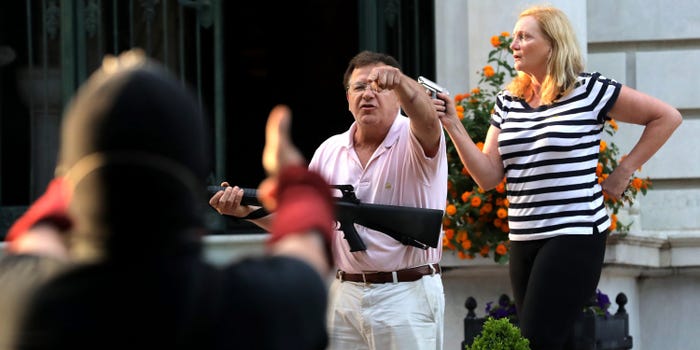 Mark and Patricia McCloskey, married St. Louis lawyers who pointed their guns at Black Lives Matter protesters during a demonstration in June, are now suing the journalist who took photos of the incident, saying he was trespassing on their property.

The McCloskeys have been charged with felony unlawful use of a firearm and tampering with evidence after images circulated online of them pointing a semiautomatic rifle with an extended magazine and a handgun at Black Lives Matter protesters who were on their way to St. Louis Mayor Lyda Krewson's house.

The couple pleaded not guilty in October, and in a lawsuit filed in St. Louis Circuit Court on Friday, they accused United Press International (UPI) photographer Bill Greenblatt of trespassing when he took photos of them brandishing guns.

"In the time since the trespassers' entrance onto Plaintiffs' private property, Plaintiffs have obtained significant national recognition and infamy, and as a result, have suffered damages," the McCloskeys said in the lawsuit, adding that they've received death threats as well as "shame, humiliation, and garden-variety severe emotional distress."

In addition to suing Greenblatt and UPI, the McCloskeys are suing Redbubble, an online marketplace where people can buy artwork submitted by other users.

The lawsuit alleges that products sold on Redbubble featuring their image often include "mocking and pejorative taglines or captions."

Along with damages, the McCloskeys have also asked the court to transfer ownership of the photo to them, accusing Redbubble, Greenblatt, and UPI of making money off of "t-shirts, masks, and other items, and licensing use of photographs bearing Plaintiffs' likenesses, without obtaining Plaintiffs' consent."

Greenblatt declined to comment on the lawsuit and directed Insider to UPI.

UPI, Redbubble, nor the McCloskeys immediately responded to Insider's requests for comment.