Washington: The GOP is now acting like a party in search of itself with less than three months before US elections that once favoured Republicans to retake both chambers of Congress and set them up for 2024.

Should the party fumble, as polls increasingly suggest, August will have been a pivotal month.

It began with the FBI’s search of Donald Trump’s Florida home and the party’s bellicose defence of the former president that belied its pro-law enforcement image. The weaknesses of Senate candidates Trump personally picked became glaring as the cycle moves from the primary season, where the focus is on a small number of party-faithful voters, to the general election, which requires a broader appeal to a varied electorate. 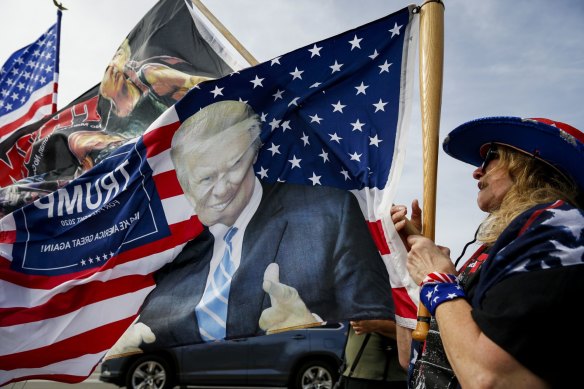 The FBI investigation comes as Donald Trump hints at running for president again in 2024.Credit:Bloomberg

There are also two high-profile Republicans uncomfortably dominating the spotlight and who put the party’s schisms in full view.

One is Liz Cheney, who led the January 6 hearings into Trump’s role inciting a mob to attack the Capitol only to lose the nomination for a third term in a landslide to a pro-Trump candidate. The other is Florida Governor Ron DeSantis, gaining momentum as an alternative to the former president, who embodies some of his pugnacity without the baggage.

Trump has shown no inclination for passing the torch and his allies used the FBI investigation to encourage him to make a third White House bid, setting up a potential clash between he and his would-be heir apparent. 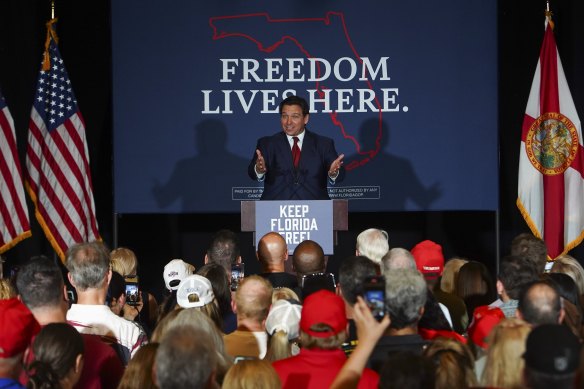 This is a defining moment for Republicans who were counting on a strong midterm showing to launch themselves back into the White House in 2024. But the party’s identity crisis is evident in the uneven performances of Senate candidates in battleground states like Pennsylvania, Georgia, Arizona and Ohio, among others, that jeopardises its prospects for a congressional majority.

“You’ve got a lot of factions within the party,” Robert Blizzard, a Republican strategist, said in an interview. “It looks convoluted. Are we the Trump party? Are we at the point where we’re DeSantis’ party?”

Meanwhile, President Joe Biden and Democrats are feeling buoyant. In August, they notched wins with legislation on veterans health, bipartisan passage of a bill to boost semiconductor chip manufacturing and a sweeping bill to address climate change and lower prescription drug costs. Biden also oversaw the killing of al-Qaida leader Ayman al-Zawahiri and this week fulfilled a campaign promise to forgive student debt.

The Senate is currently deadlocked at 50-50, with Vice President Kamala Harris wielding the deciding vote.

Democrats are now favoured to expand their majority in the upper chamber, according to Nate Silver’s FiveThirtyEight. But Republicans are still favoured to win the House, given how those races are decided in carefully gerrymandered districts in favour of the party that controls the state’s legislature.

The danger for the GOP was made publicly clear when Senate Republican Leader Mitch McConnell said last week that “candidate quality has a lot to do with the outcome” of the Senate. It was an implicit acknowledgment that in competitive states a Trump-endorsed candidate faces a strong Democrat and could lose.

It also sparked the latest public war of words between the one-time allies, whose seminal achievement was the reshaping of the Supreme Court. Trump took obvious umbrage with McConnell’s remarks, issuing a statement that said “a new Republican Leader in the Senate should be picked immediately!”

“If you can’t win as a Republican in this cycle then you have some real issues,” said Terry Sullivan, a strategist who ran Senator Marco Rubio’s 2016 presidential campaign.

But there is a palpable and vocal base still enthralled with the 76-year-old Trump and want him back. Yale and Harvard Law-educated DeSantis, 43, offers a more methodical take on the Make America Great Again mantra. Cheney, 56, represents a party that might not exist anymore and has been refashioned in Trump’s image.

Republicans are increasingly worried that they squandered a winning hand in the form of Biden’s poor approval rating and anger over decades-high inflation and crime. The tide there is already turning too. Biden’s popularity is rebounding, gasoline prices are receding, inflation is showing signs of cooling and unemployment remains low. 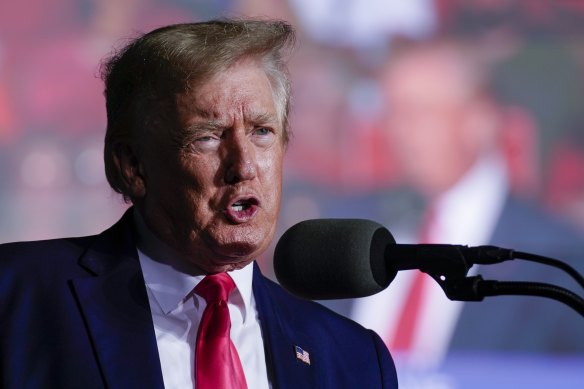 To Republican political consultants like Sullivan, the very fabric of the GOP has changed. By its wholesale adoption of a more populist identity, they sacrificed highly educated, upper-middle-class suburbanites who became the independent voters.

That slice of the population is now up for grabs for both parties, but it’s more challenging for Republicans in places like Wisconsin or Pennsylvania to square the circle.

Republican strategist John Thomas said that the GOP’s identity was now fully cemented in Trump’s image with the August FBI search of his Mar-a-Lago resort. Up to that point Thomas had been working on a pro-Desantis political action committee, with donor commitments in the “mid-seven-figures,” he said.

“That was a pivotal, hinge moment in the Republican party,” Thomas said. “To be the man, you’ve got to beat the man.”

“Right now, no Republican has beaten Trump. Ron has to take it from Trump and right now I just don’t see it.”