A South Korean company has released a new mask designed to help people feel more comfortable dining indoors by covering just their nose while they are eating or drinking. Behold: The “kosk.”

The mask has gone viral on social media and in various online forums, after it was recently unveiled by a South Korean company, Atman. It can be used folded up when eating just to cover the nose, and unfolded to cover the both the nose and the mouth after eating. 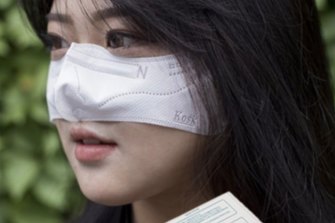 It is available on an online shopping website for about $US8 for a box of 10.

The new mask is called “kosk,” or a nose mask – a portmanteau of “mask” and “ko,” the Korean word for nose. “Kosk” is typically used to describe people who wear their masks over their mouth, with their nose revealed.

Another popular invention is the “tuksk,” a combination of “mask” and “tuk,” the Korean word for chin. It describes people who wear their masks on their chin, with their nose and mouth revealed.

The two terms are often used to criticise people who are not wearing their masks properly. Mask-wearing is widespread in South Korea, which is among the East Asian countries that quickly implemented mask-wearing and social distancing as a well-known public health response to previous respiratory viruses.

The reveal of the new “kosk” drew curiosity and criticism online. Some users mocked the company, noting that an uncovered mouth can still spread the virus and that it is essentially the inverse of the original use of the term “kosk,” which only covers the mouth and not the nose.

Others welcomed the new product, saying it would make them feel more comfortable when they attend mandatory work dinners or in other social settings. One reviewer said they felt more comfortable eating their meal at their office while their nose was covered, and another reviewer said they plan to buy the item in bulk and use it frequently when they go to coffee shops and restaurants.

The new mask comes as South Korea grapples with a surge in Omicron cases, and expands the availability of testing and oral treatments to those who are deemed high priority cases, including the elderly.

South Korea has not mandated a nationwide lockdown in the pandemic, but has imposed restrictions on the number of people who can gather and the hours of operation for restaurants, bars and other businesses. The country now requires proof of vaccine for most establishments.