So much for plastic ban! The great Glastonbury clean-up begins as sea of bottles and food waste covers farm just hours after David Attenborough praised festival for going ‘plastic-free’

Work is underway to clear up a sea of plastic bottles left strewn across Glastonbury this year – despite a ban on single-use plastic at the event which was backed by Sir David Attenborough in a surprise appearance.

Around 200,000 revellers have been at the site over the past five days and attempts to make it a ‘plastic-free’ festival have come undone judging by the mounds of debris left behind at Worthy Farm.

It comes despite climate change and the environment being the theme of the festival and repeated pleas from organisers for music-lovers to ‘love the farm and leave no trace’.

The official Glastonbury Twitter account last night also urged music lovers to ‘leave this beautiful countryside in the state that it deserves’ ahead of a six-week clear-up operation.

Meanwhile Sir David, 93, appeared on the Pyramid Stage yesterday to throw his weight behind the anti-plastic campaign and thank the festival for ditching it, with his words appearing to fall on deaf ears.

Highlights of the musical extravaganza in Pilton, Somerset, have included headliners Stormzy, The Killers and The Cure as well as performances from Kylie Minogue and Lewis Capaldi. 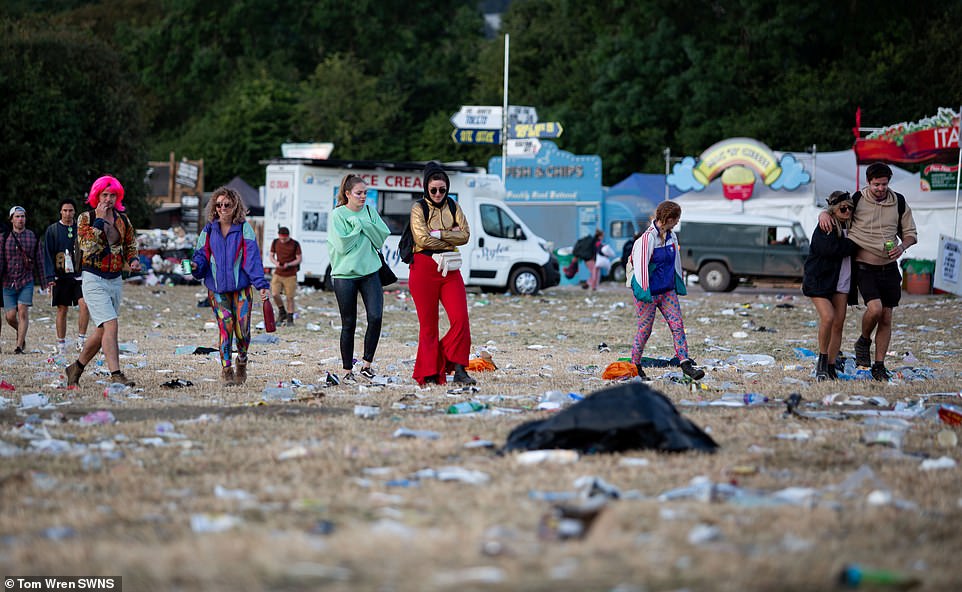 Clear-up work is getting underway at Glastonbury this morning after revellers left rubbish strewn about Worthy Farm, pictured 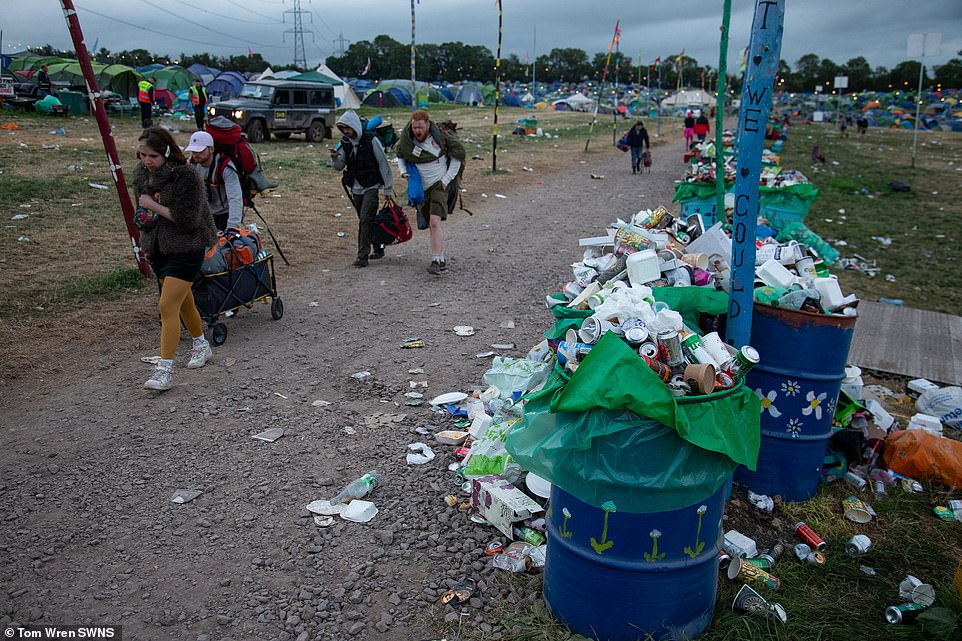 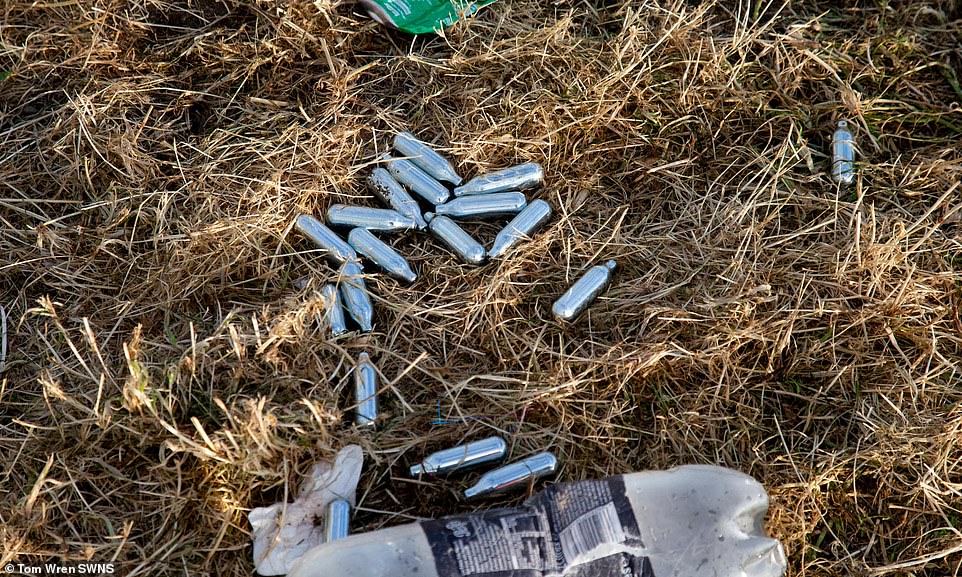 Canisters once containing nitrous oxide, aka ‘hippy crack’ were among the debris strewn around the Somerset site 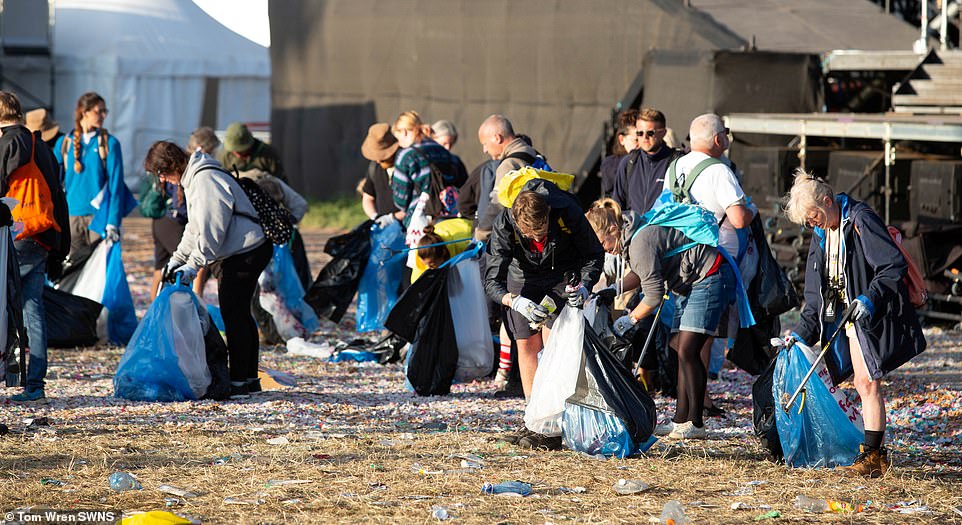 More than 1,000 volunteers are at the site now clearing up waste, pictured, but it could take six weeks to shift it all 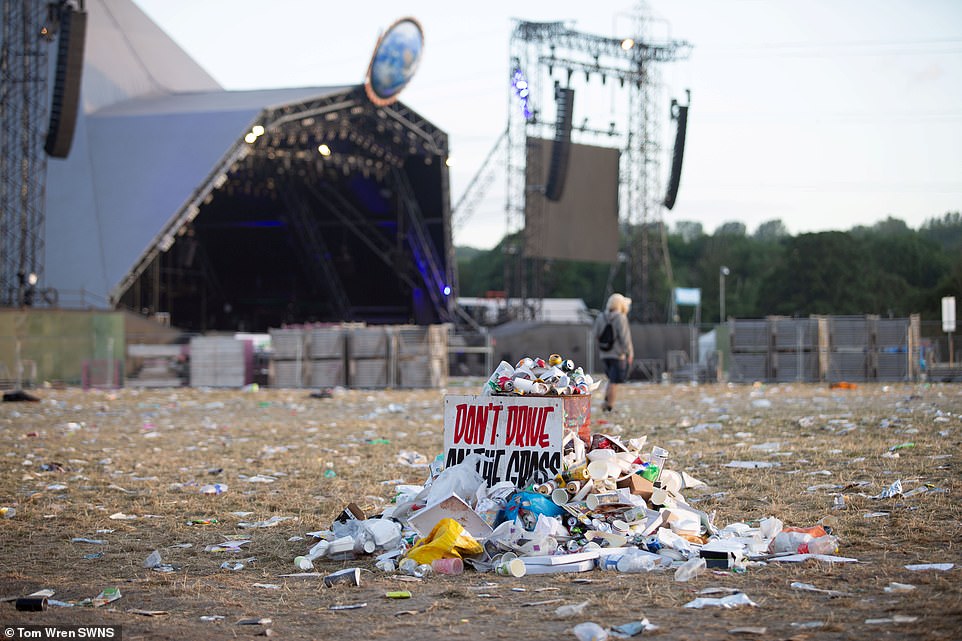 Bins have been overflowing with cans, paper and food waste while organisers have pleaded with revellers to take all of their own camping equipment with them 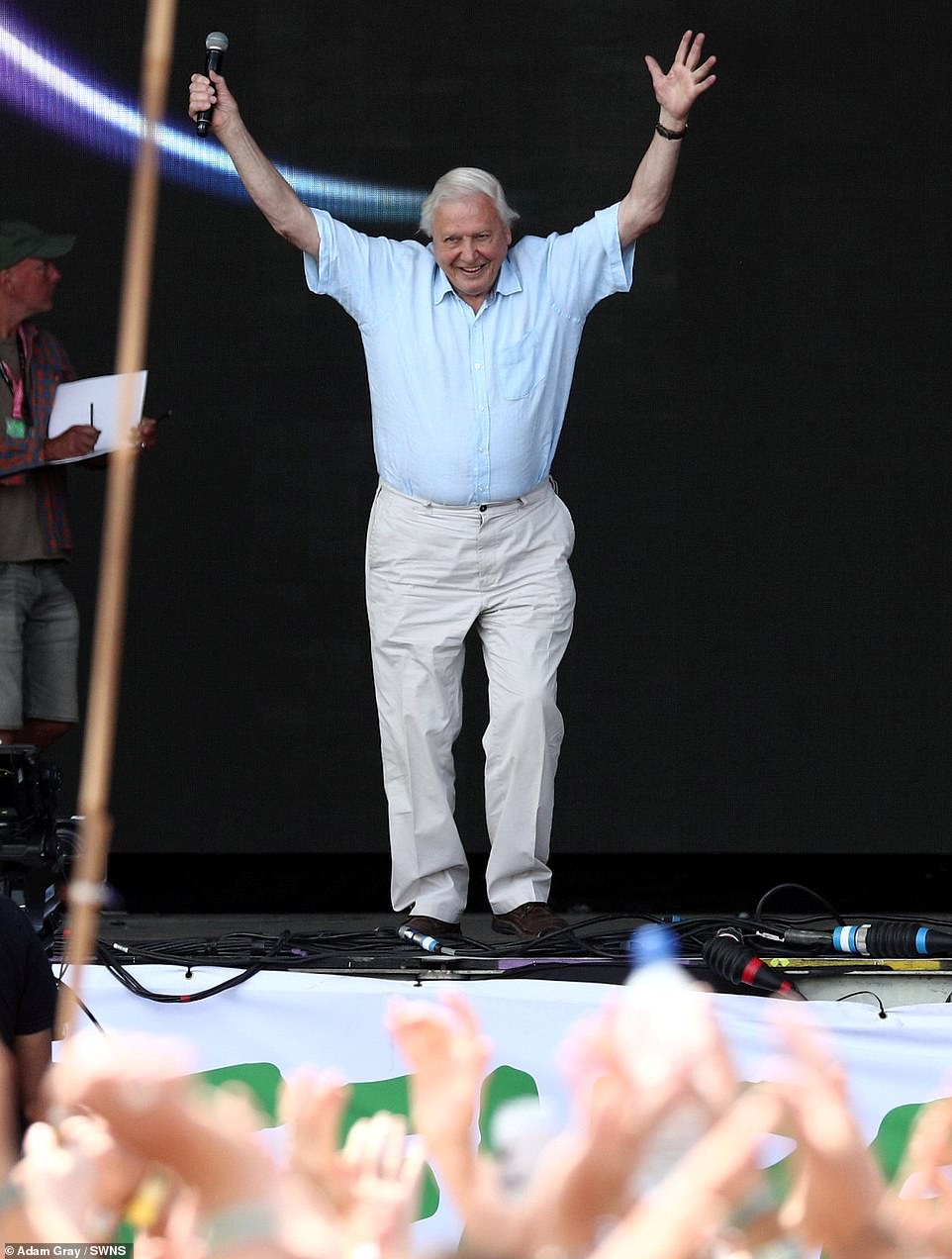 David Attenborough, 93, addressed the masses on the Pyramid stage at the Glastonbury Festival this afternoon where he rallied against ocean pollution

Organisers previously urged those attending to bring sturdy tents and return home with them, instead of dumping them at the end of the event.

In an interview with the Glastonbury Free Press on Sunday, Emily Eavis said: ‘I really hope they will.

‘We’ve made so many positive strides with our green campaigns this year.

‘It’s incredible to think that there will be one million fewer plastic bottles for the planet to deal with because we’ve stopped selling them.

‘The most eye opening part of the weekend for me was not seeing any plastic bottles in the bins or on the ground.

‘I think people are really starting to understand how important it is to treat the land with respect, and to stop living a disposable lifestyle.’

There were more than one million plastic drinks bottles sold at the festival in 2017, and zero sold in 2019.

Sir David’s rallying cry came as festival-goers slammed the Somerset farm site last night as ‘disgusting’ and shamed their fellow attendees for chucking rubbish to the ground – sometimes just metres away from a bin.

In his speech to thousands of fans from the Pyramid Stage, Sir David said: ‘There was one sequence in Blue Planet II which everyone seems to remember. It is one in which we showed what plastic has done to the creatures that live in the ocean. It had an extraordinary effect and now this great festival has gone plastic-free.’ 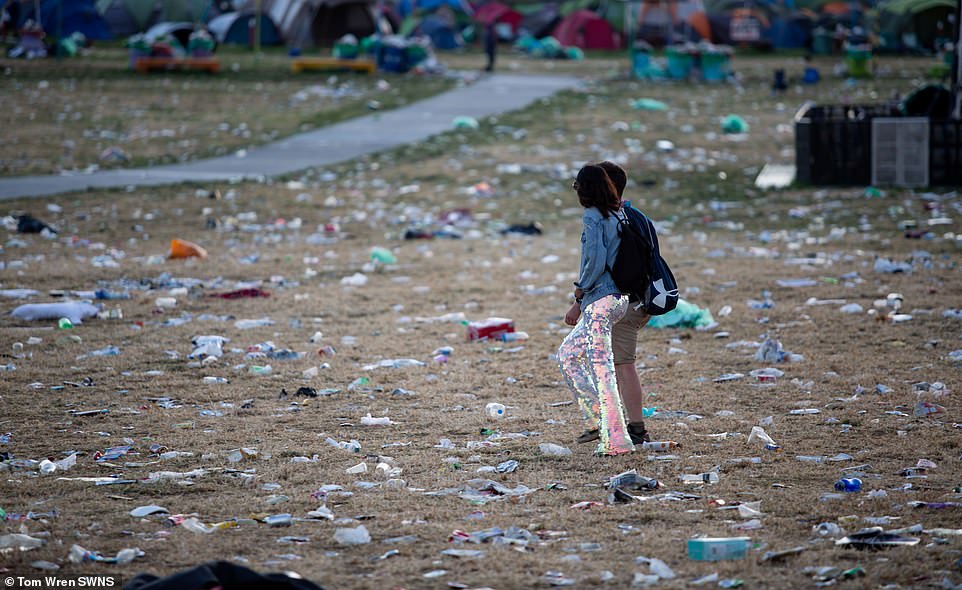 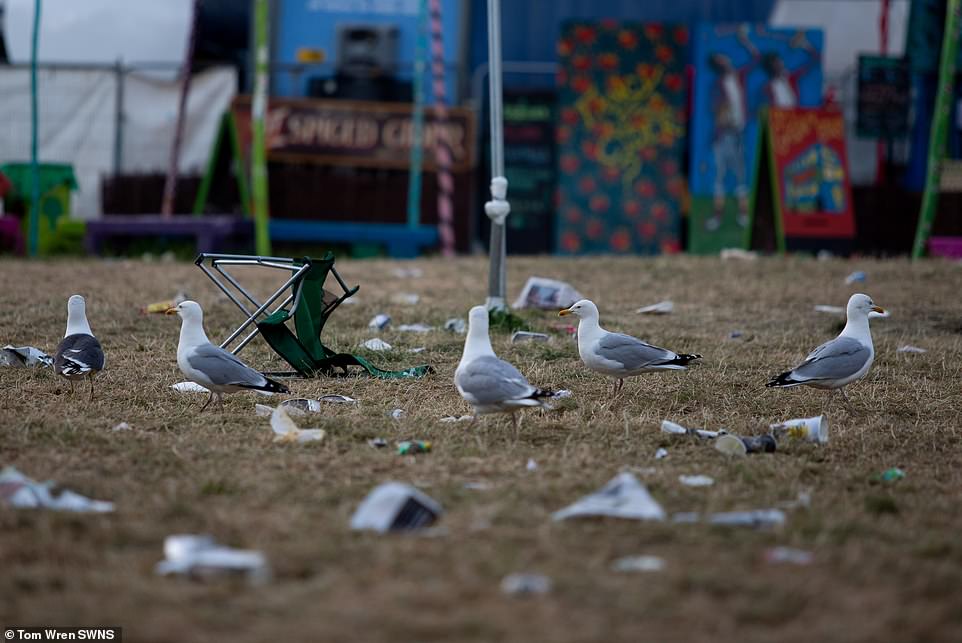 Flocks of seagulls were also attracted to the food left discarded on the floor, with some revellers branded ‘disgusting’ last night for throwing waste near bins rather than in them 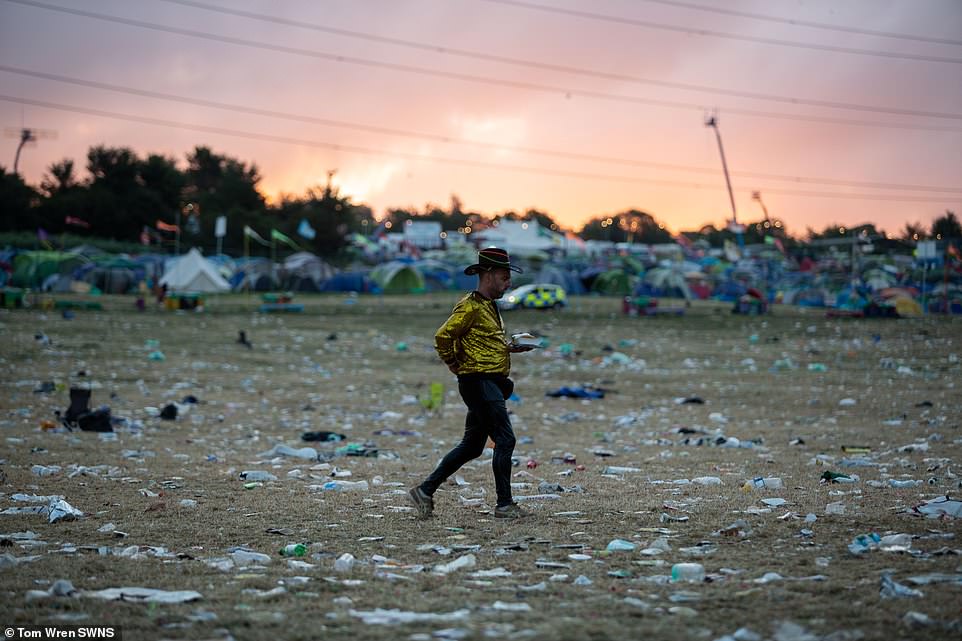 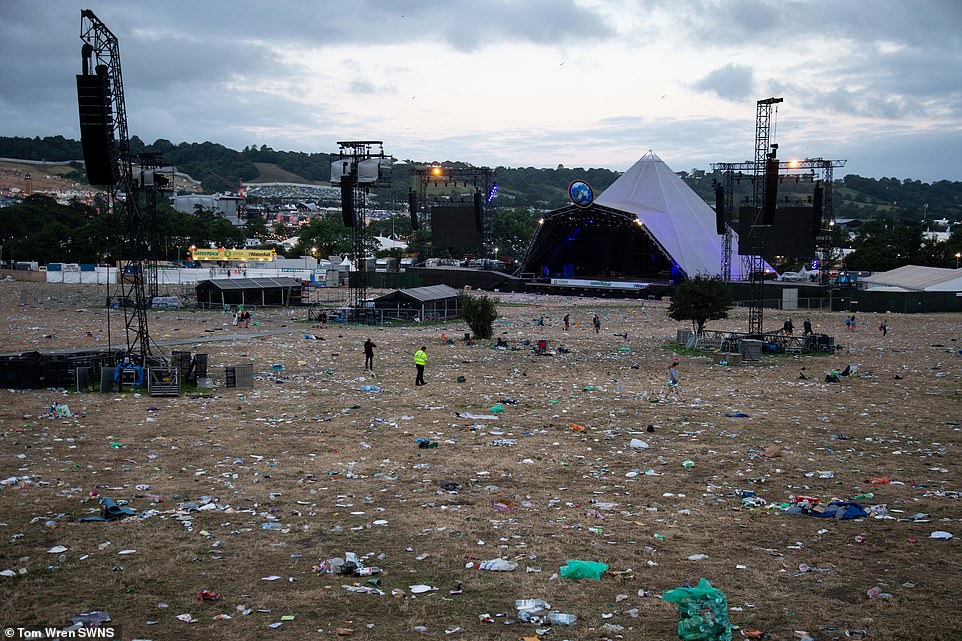 Pictures taken this morning have revealed the full extent of the waste left behind at Glastonbury, with plastic bottles spotted as far as the eye can see

He revealed that a new BBC series called Seven Worlds, One Planet will begin ‘later on this year’ before showing the gathered ‘a few glimpses of what awaits you within the next few months’.

Kayleigh Townsend, from Yorkshire, said seeing Sir David on the Pyramid stage was ‘inspiring’. She said: ‘To give him the main stage and make sure as many people heard him as possible was great.

‘It was really quite emotional – I got quite teared up. I’m a big nature documentary fan. I’m really excited to watch it.’ 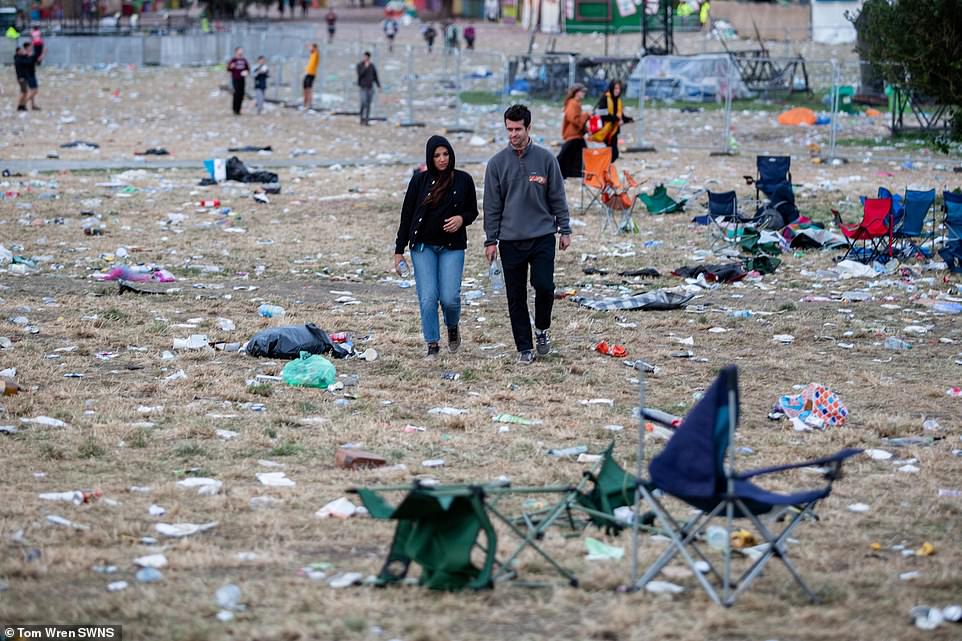 Despite pleas for revellers to take their camping equipment with them, dozens of garden chairs, pictured, appear to have been abandoned 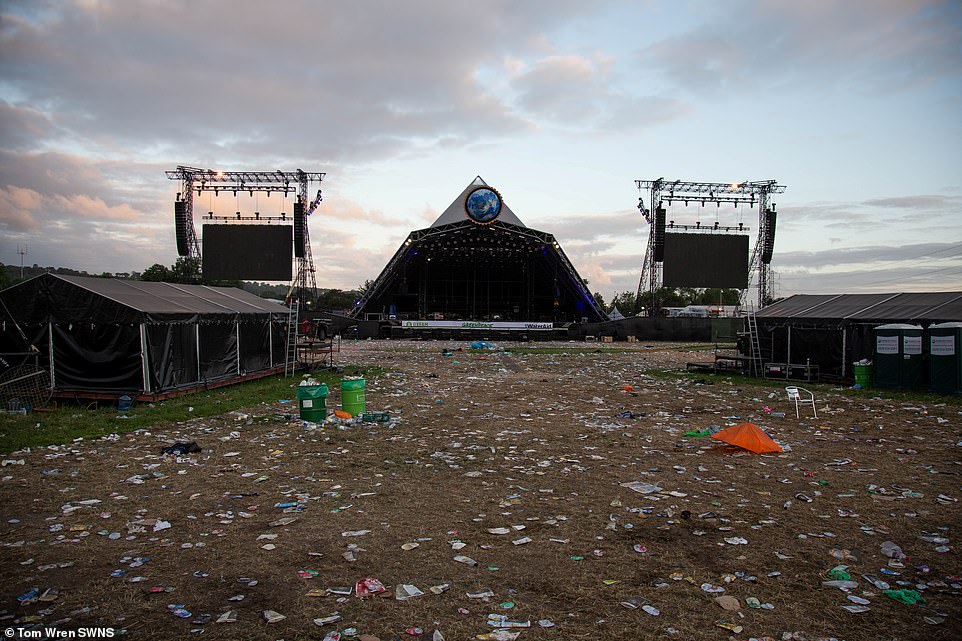 The field in front of the Pyramid Stage, pictured, looked more like a dump with all the rubbish that had been left behind 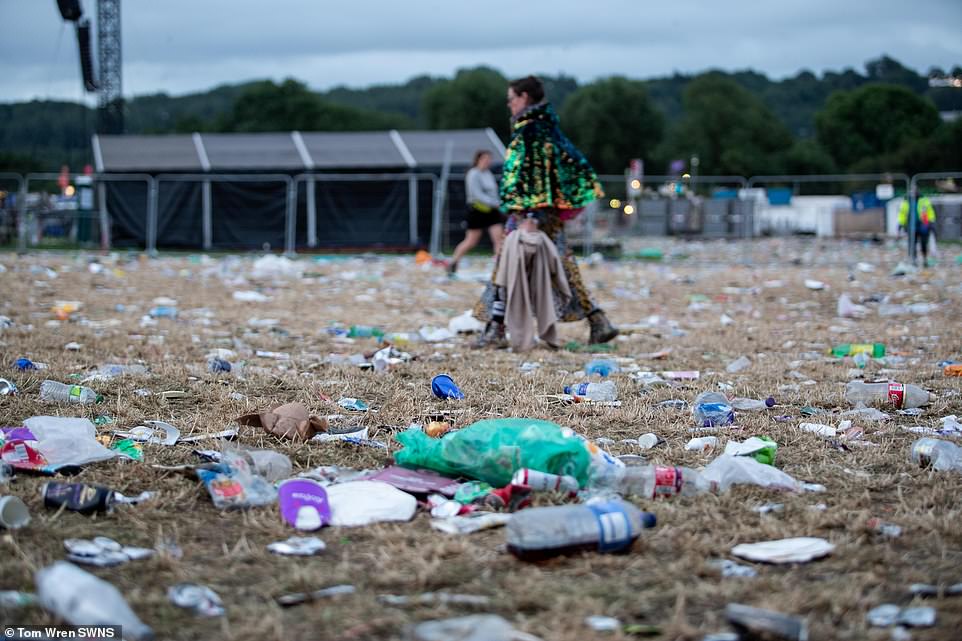 Revellers were asked to ‘Love the farm, leave no trace’ by Glastonbury organisers but the message did not sink in with some judging by the amount of waste left behind 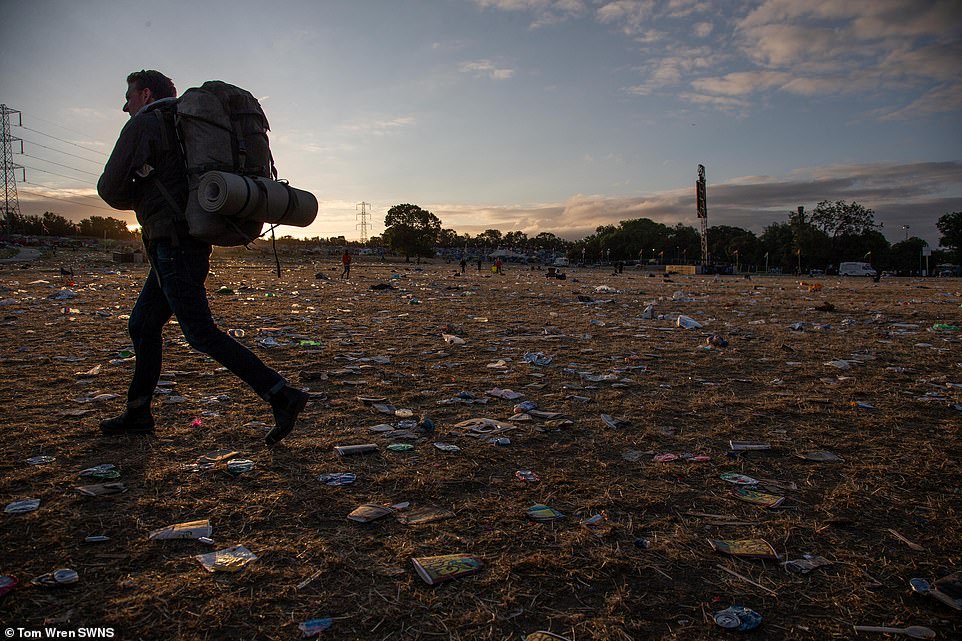 As campers packed up their gear and left this morning, pictured, they left behind cans and paper cups that had been trampled into the ground 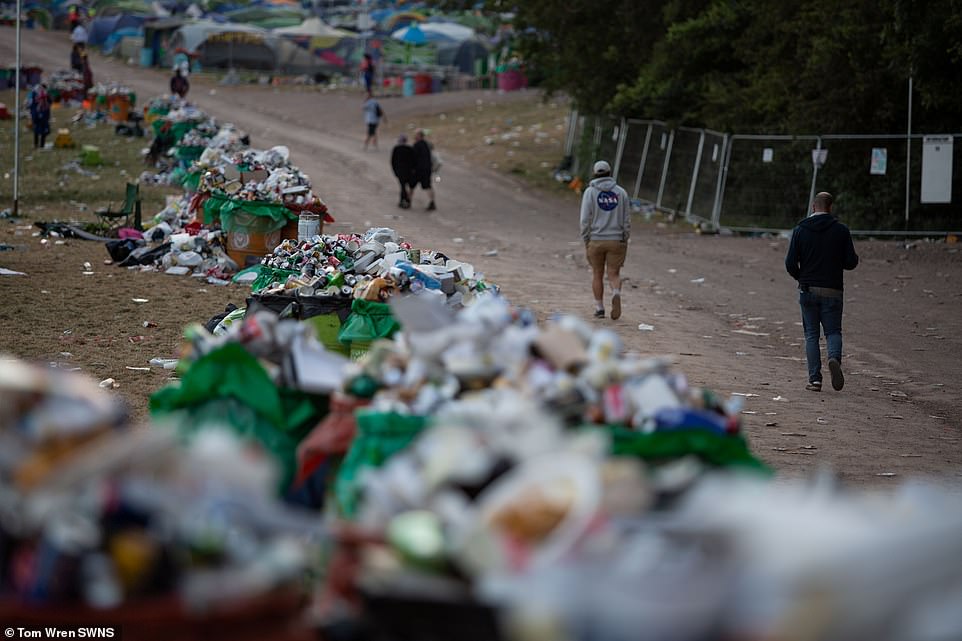 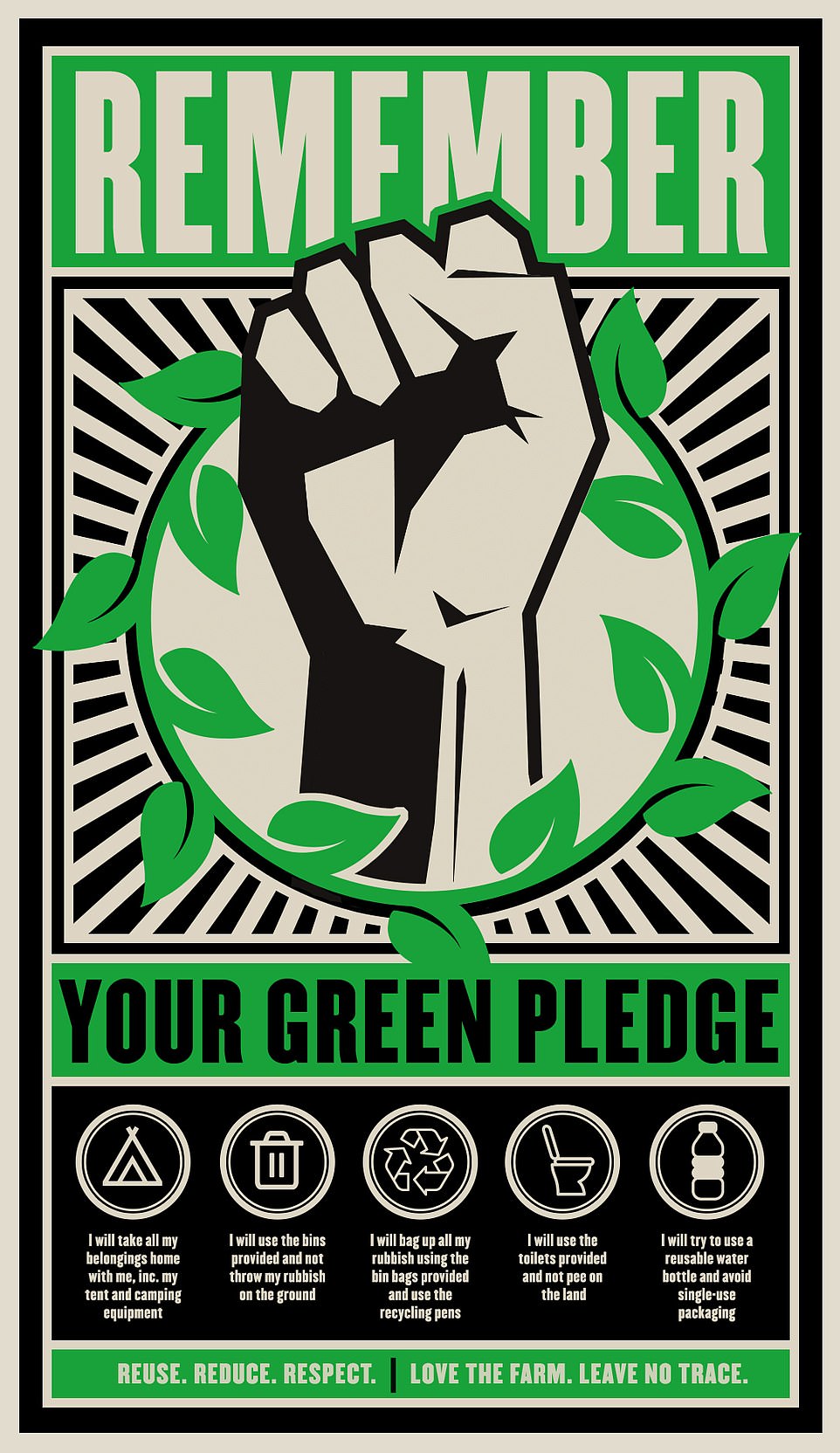 In total, 45 tonnes of aluminium cans were processed on site, while 4,500 litres of cooking oil was turned into biofuel.

More than 1,300 recycling volunteers are at Glastonbury Festival each year, while more than 10,000 trees have been planted locally since 2000.

This year, there were 850 water points on the 900-acre site, with 37 WaterAid refill kiosks.

Around 40 per cent of festival-goers get to Glastonbury by public transport.

The mission to convert the event’s site back into a functioning dairy farm could take up to six weeks.

Next year, Glastonbury Festival will celebrate its 50th anniversary.

‘We won’t be slowing down for very long,’ Emily Eavis said.

‘We have already started working on next year’s 50th anniversary.

‘Trust me when I say we are planning a huge celebration.’

The festival may have a reputation for mud and rain but this year’s event was instead hot and sunny, with temperatures reaching more than 28C. 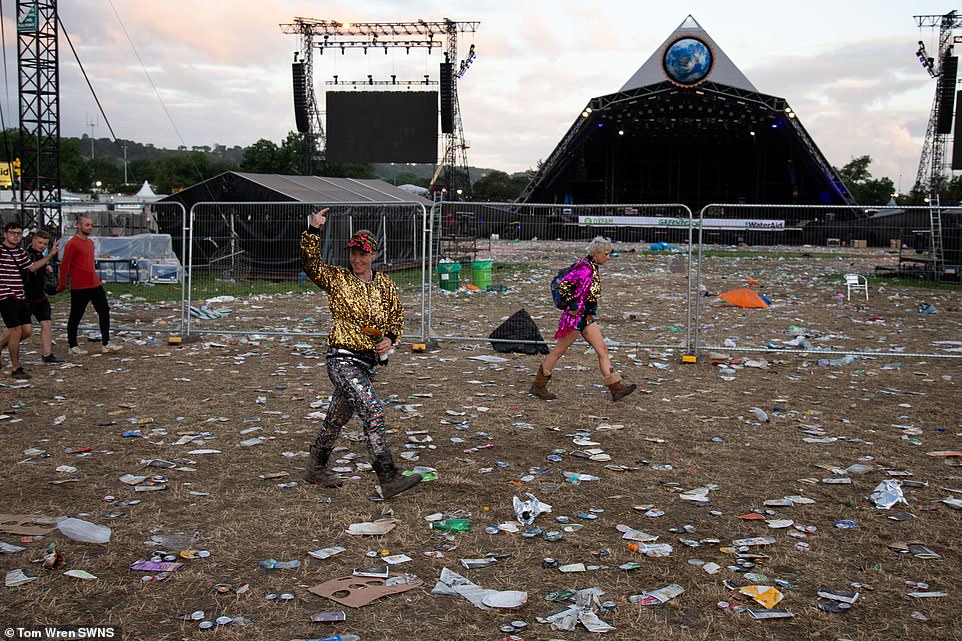 Thousands of revellers got up in the early hours of the morning or stayed up all night to get off the site as early as possible before making the journey home. Pictured here are music lovers leaving the site still wearing their sparkly outfits 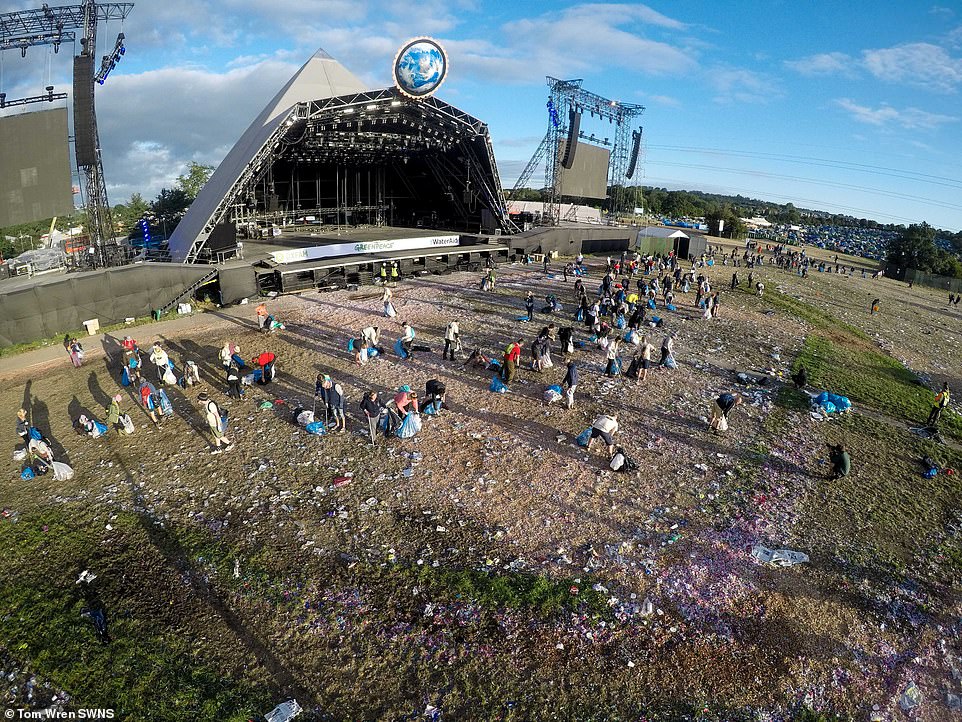 Around 1,300 volunteers are at the site this year with this group pictured shifting debris from outside the Pyramid Stage at Worthy Farm this morning