From Novak Djokovic’s visa rejection to Labor’s election victories, the flood crisis and an iconic Berlin nightclub, here is a small sample of The Age’s best stories of the year, as selected by staff.

Some of the best stories of 2022, as selected by The Age staff.Credit:The Age

The Trafficked series demonstrated the best of what our investigative team can do: it was a powerful human story about women being trafficked into sexual servitude in Australia that exposed significant and appalling regulatory failings by the Australian Border Force and other agencies. Along the way it made alarming discoveries about how education and refugee visas are being misused by cynical syndicates.

It takes courage to seriously challenge the reputation of a man whom many have described as a hero, but investigative reporter Charlotte Grieve did just that when she raised questions of celebrity surgeon Munjed Al Muderis. Her series, painstakingly researched, into the refugee-surgeon told the stories of those who feel he let them down all over the world by poor after-care, high-pressure sales tactics and a growth-at-all-costs approach. 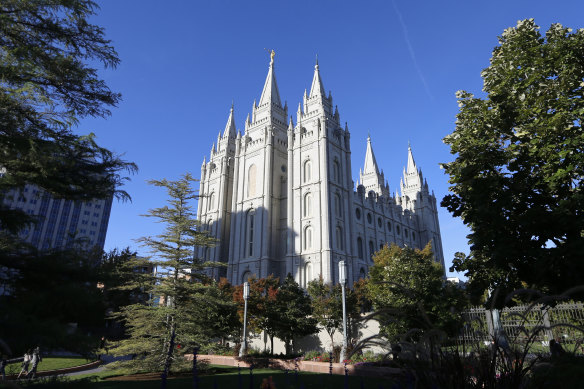 The Salt Lake Temple in Salt Lake City, the centre of world Mormonism.Credit:AP

The intricacies of international tax structures are enough to put off most reporters, but Ben Schneiders spent months finding and then combing through the available accounts of the Church of Jesus Christ of Latter-day Saints (commonly called the Mormons) to expose an alleged international tax-minimisation scheme which saw billions of dollars washing through Australia. The complex scheme helped the church amass a $US100 billion, tax-free investment fund, calling into question whether its dominant purpose really is a religious one.

We’ve nominated the same two series: our work on the ground in Ukraine and Blood Gold. Both were wildly ambitious, almost impossible schemes to launch. 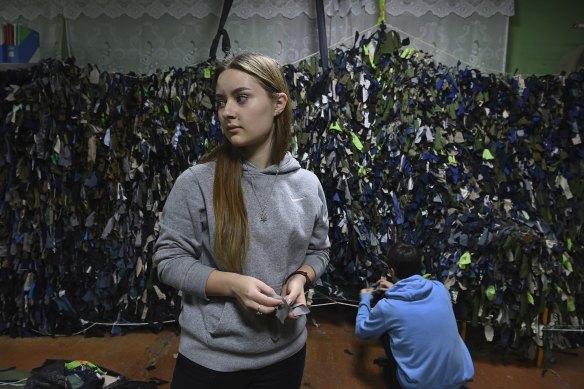 In her final year of high school, Tetiana Onopriienko, 16, volunteers making camouflage nets in a community shelter in Uman to aid the Ukrainian resistance.Credit:Kate Geraghty

The first Ukrainian road trip by Kate Geraghty and Anthony Galloway happened as the war began. It was, hands down, the most absorbing, rewarding and nerve-wracking job I had a hand in all year, and the whole newsroom did them proud. 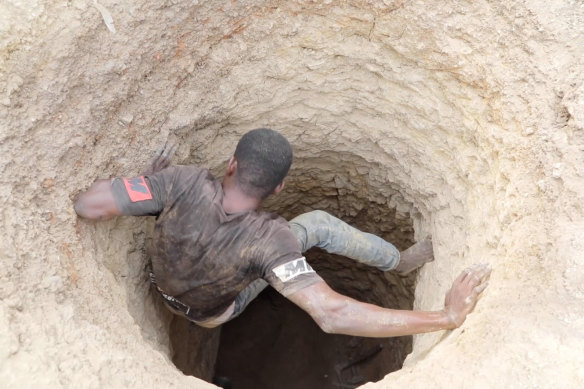 Local workers climb into a mine in Gban.

The Blood Gold investigation by Eryk Bagshaw sounded even tougher when we first talked about it almost two years ago. It read, looked and sounded incredible. But this astonishing three-continent story is also a testimony to Eryk’s work with his excellent collaborator Edward Adeti in Ghana. And get the readership it did – fantastic.

The popularity of Michael Fowler’s first foray into travel writing showed that even if our readers would never go to the iconic Berlin nightclub Berghain themselves, they loved reading about it. 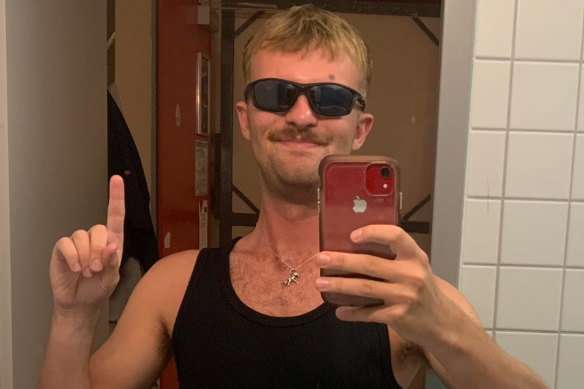 In a new initiative during state and federal election campaigns, The Age’s slow blogs took the readers on a journey through several key seats and focused in detail on the issues important to voters in those electorates. Our reporters filed stories and observations daily. 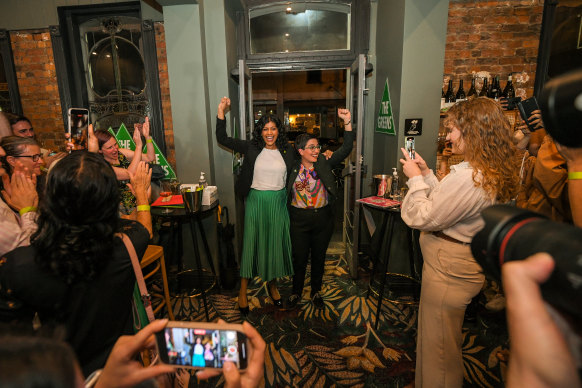 Two of the slow blogs focused on the federal electorates of Goldstein and Kooyong, where our team had a front-row seat to the start of the teal revolution. During the state election, we ran slow blogs in Hawthorn, Melton and Richmond. Read the collections here:

This is ripper read from Sophie Aubrey about Dandenong, a part of Melbourne that’s often ignored. It was so good it made a bunch of people decide to subscribe to The Age. 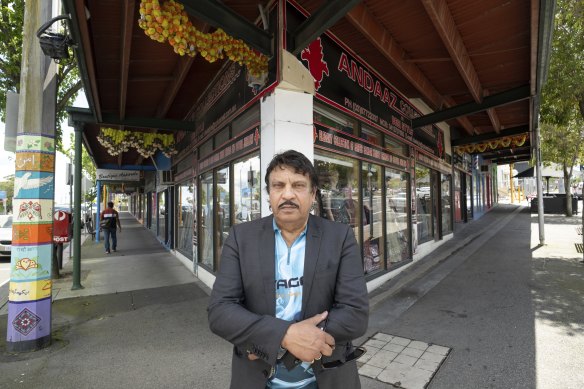 Steve Khan, a Dandenong resident and business owner, was one of the pioneers of the Little India precinct.Credit:Penny Stephens

Paul Sakkal took weeks to check every detail of this story about IBAC’s investigations of Daniel Andrews, and the fight to publish it was a newsroom-wide effort. 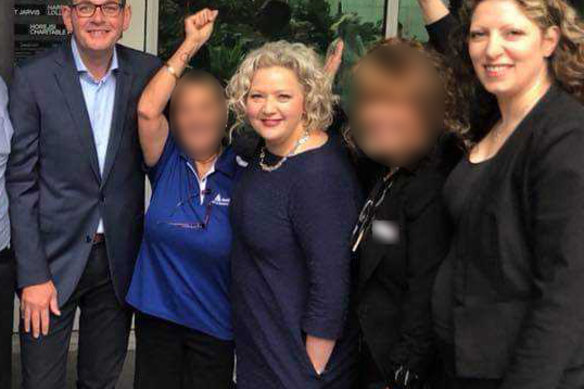 A room at Melbourne’s hardship hotel? It’s a last, desperate resort – Jewel Topsfield went above and beyond for this one and disproved the theory that readers aren’t interested in certain issues. They are when they’re told skillfully and compassionately.

This was the first year of freedom after Victoria’s lockdowns, and we made the most of it. There was football, again, and that other football as the Socceroos made their way through early rounds of the World Cup. The state was hit by floods, with inner-city suburbs and country towns alike inundated with rising waters. Entertainment and events were back on our stages, with visiting celebrities and local artists reminding us of the beauty of creativity and what we’d missed for two years. 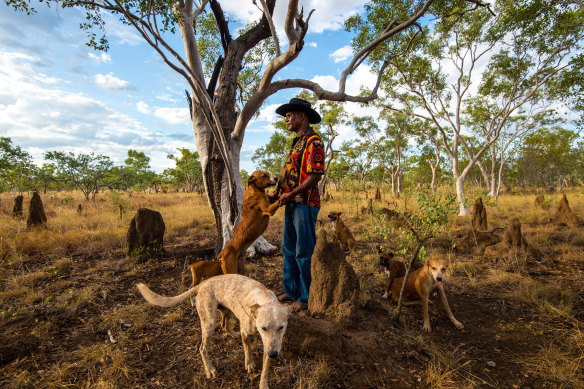 This photo by Justin McManus of Kuranjini man Johnny Wilson at home with his dogs struck a chord.Credit:Justin McManus

My favourite picture of the year is this one by Justin McManus, shot on assignment in the Northern Territory and for which he was awarded the Walkley Foundation’s 2022 Nikon Portrait Prize. I remember seeing this image, “Johnny and his Dogs”, depicting Kuranjini man Johnny Wilson with his pets, and thinking it had to go on the front page. And it did. Here’s a gallery we pulled together of our best photos of 2022.

State political reporter Paul Sakkal worked through the night of January 4, updating his exclusive report about Novak Djokovic’s last-minute visa rejection. As our coverage was quoted all over the world, Paul worked into the morning, filing break after break.

“Novak Djokovic has been told his visa has been rejected and that he will be flown out of Australia later on Thursday,” he messaged The Age’s breaking news Slack channel early on January 5 with a red alarm emoji. “Djokovic’s lawyers are in the process of challenging the decision, a source familiar with the situation confirmed to The Age.” What a way to start the year! 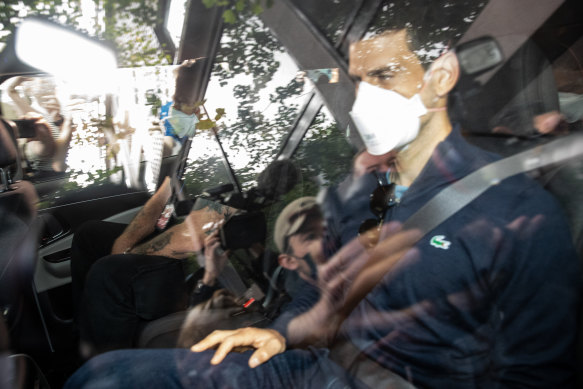 Novak Djokovic in detention in Melbourne in January, before he was evicted from the country.Credit:Getty Images

This Caroline Wilson piece, in which she spoke to Cyril Rioli and his wife Shannyn Ah Sam-Rioli, was excellent. The Hawthorn legend spoke about the reasons he was staying away from the club and the story helped reveal a real issue within football, which is still being uncovered today. 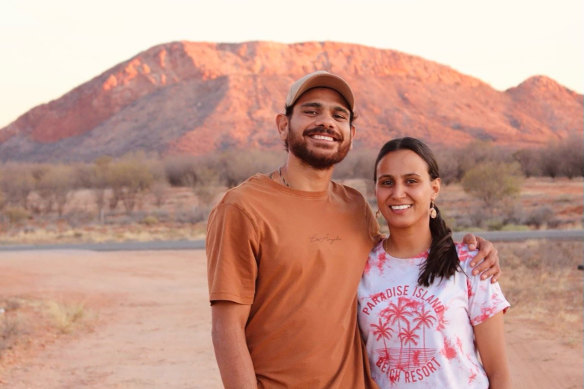 I liked Charlotte Grieve’s terrific series on surgeon Munjed Al-Muderis. It required months of investigative work and forensic attention to detail, interviewing hundreds of people around the world, incorporating powerful human stories and a TV spin-off. 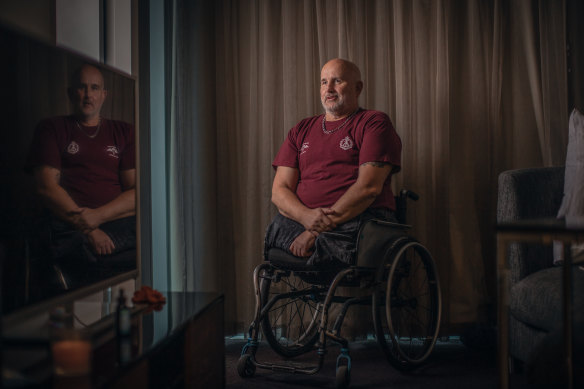 I also appreciated Nick McKenzie’s groundbreaking series on human trafficking. It was another example of wonderful public interest journalism that required many months of work across several continents, exposing significant flaws in Australia’s migration and border systems and the role of a heap of shady characters.

I loved this one from Miki Perkins on a golf club doing things differently – plus “Baa for the course: The golf club that shares a fairway with sheep” is a cracking headline. And this story from Marnie Vinall was very timely and asked some difficult questions of the AFL. 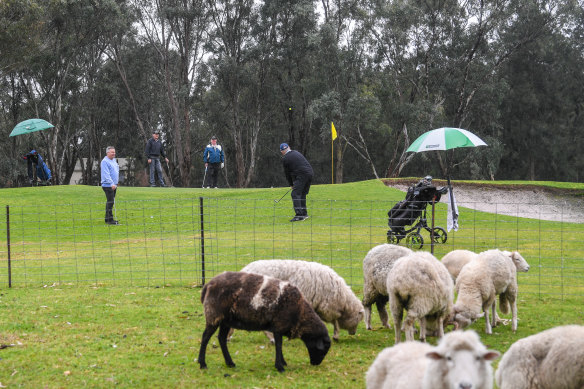 I got very invested in this visual story by Timna Jacks and Justin McManus on traditional owners taking on the NT’s powerful fracking industry. It’s a really well-researched, balanced, respectful and insightful piece, and the photos and graphics are so helpful in fully understanding some of the complexities. 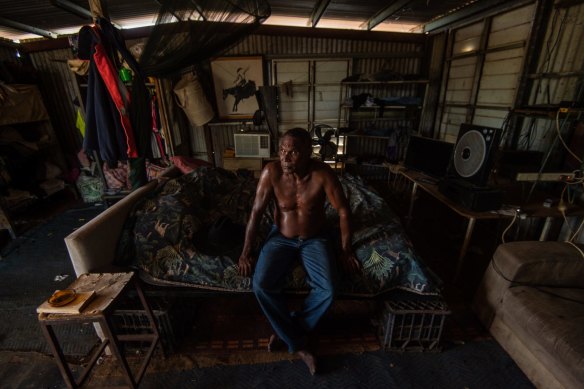 One article that stood out for me this year was “A moment to answer the door, and Fiori’s world was torn apart” by Jewel Topsfield, about a mother whose baby drowned in the bath. It was a complex story to tell, but Jewel’s coverage was sensitively balanced. What I also found interesting was Jewel’s decision to tell this story as a timeline. 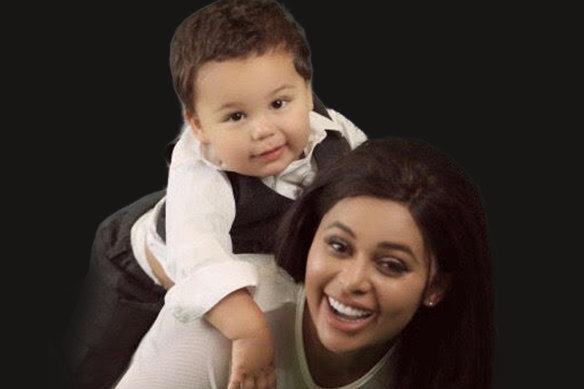 Fior Giovanni with her son Odis.

Most natural disasters hit suddenly, with little warning. But this story by Bianca Hall captured a different phenomenon: the eerie sense of foreboding Echuca residents must have felt as they waited, helplessly, for their town to be inundated by floodwater. You could not help but feel for them.

I loved Benjamin Preiss’ immersive (pardon the pun) coverage of the flooding in Rochester. Ben and photographer Justin McManus were invited into the home of the remarkably sanguine Mulcahy family, who kept smiling and reminiscing as the water inexorably rose through their home. It was journalism that took you right into other people’s lives, and demonstrated the power of covering national disasters from the field rather than the office. 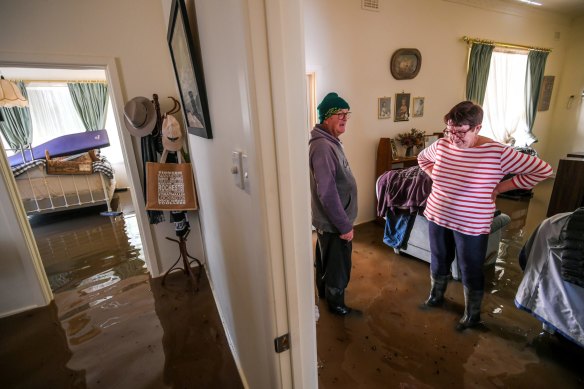 Brian and Glenys Mulcahy prepare their Rochester home of the past 54 years for the rising flood water.Credit:Justin McManus

Melissa Fyfe’s revealing profile of Monique Ryan was the first comprehensive portrait of the woman who unseated Josh Frydenberg and won the seat once regarded as the jewel in the crown for the Liberal party. Fyfe is a beautiful writer and there are keenly observed details in the feature – Ryan’s “unelectable hair”, and the deer on her desk that references the political observer who said attacking Ryan would be “like taking on Bambi” – that make this a rich and rewarding read. 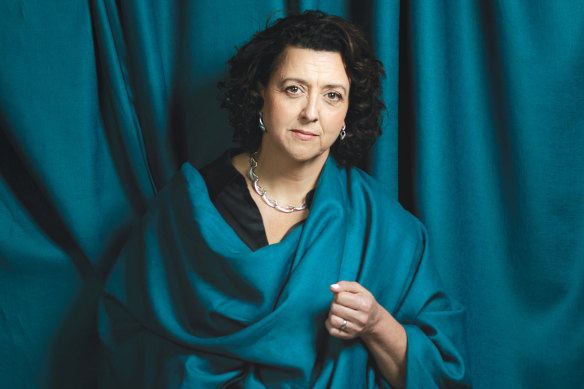 A story about Edna Sheppard, a 100-year-old great-grandmother of eight with a gym obsession, was one of my favourites this year. Carolyn Webb’s story exemplifies her superpower – consistently unearthing stories like these of otherwise unknown Victorians doing interesting things. It’s really important, often heart-warming stuff in the mix of the stories we tell. 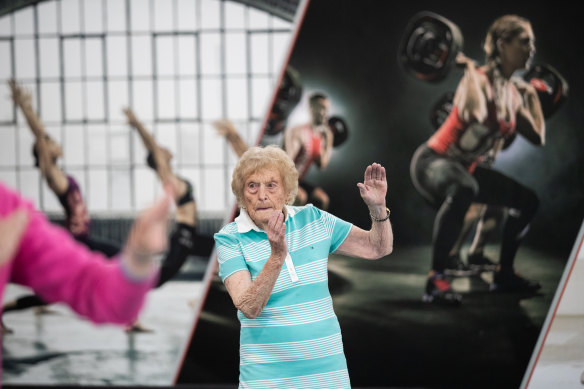 Edna Sheppard, 100, works out at the Broadmeadows Aquatic and Leisure Centre.Credit:Jason South

This explainer by Sherryn Groch about the geopolitics of the Arctic territory between Russia and the US is tremendously compelling and well-paced. Don’t be daunted by the length: the story unfolds like a political thriller, masterfully guiding the reader through the history of this remote, inhospitable region to the present day, where climate change is rapidly changing the environment and balance of power. Groch incorporates expertise from a range of journalists and foreign policy experts, and the story is enriched by beautiful images and maps. When I started reading I knew very little about this place, and when I finished I had a solid grasp of the issues – which is exactly what you want from an explainer.

I loved this piece by Annika Smethurst – especially the detail that Tim Smith ate his pizza with a knife and fork. But also, there’s something so Shakespearean about the aspirations of a once up-and-coming politician, which Annika brilliantly captures in all its messy and fascinating glory. 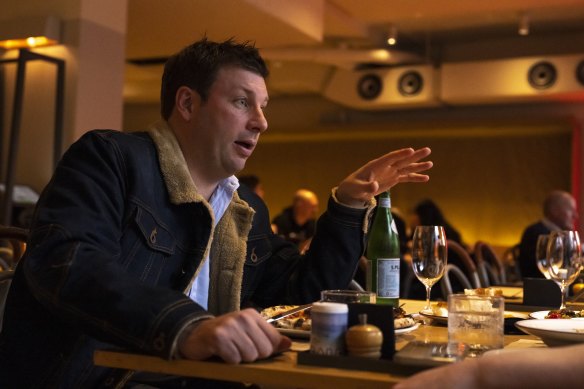