It could have been taken yesterday in any Melbourne backyard: A small boy with plump cheeks and flowing hair, caught between smiles.

He rides an antique rocking horse and has, perhaps, been clothed by his parents in cutesy bygone fashions for the cover of this year’s Christmas card. 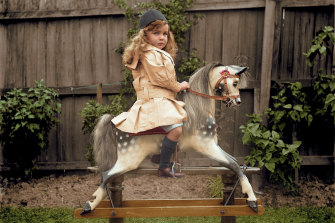 Harold Lanyon on “Taylor”, May 1899, as captured by Mark Daniel in his series of photographs of family, friends, scenes and events in Melbourne, 1898-1907.Credit:State Library of Victoria/Benjamin Thomas

In the background is a weathered wooden fence and a modest suburban garden.

But while little Harold Lanyon stares back through blue eyes, the photo was in fact taken in 1899.

The original was from a Melbourne photographer named Mark Daniel. The modern retelling is the work of Benjamin Thomas, who for six years has imbued black and white photographs with vivid and intricate colour from his Preston home. 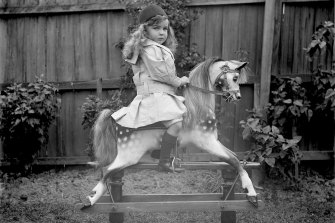 The original black and white image.Credit:State Library of Victoria

Much of his work is based on military and war-time photography. He has coloured the late prime minister Bob Hawke from the early 1950s, bushmen breaking for lunch at the turn of the 20th century and was the first to begin reproducing scenes of old Melbourne streets and people. 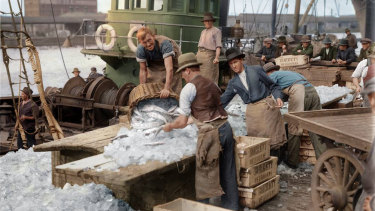 Wholesale fish merchants J.R. Borrett & Co. unload and process fish at Queen’s Wharf on the Yarra River. They are behind the fish market building which was located on the south-east corner of Flinders Street and Spencer Street, circa 1940. Photographer: Allan C Green (1878-1954).Credit:State Library of Victoria/Benjamin Thomas 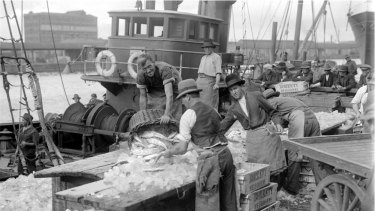 “As much as I like black and white photos, they create distance to us from our modern perspective,” Mr Thomas said.

“With the introduction of colour, that all just slips away. 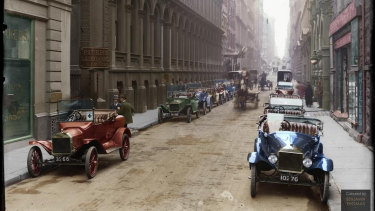 A view looking east along Flinders Lane between Swanston and Elizabeth streets, circa 1910-1925.Credit:State Library of Victoria/Benjamin Thomas

He doesn’t sell the prints, only posts them for the wonder of his near-25,000 followers on his Facebook page Colours of Yesterday. 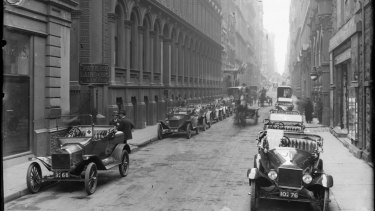 Using a tablet, stylus and Photoshop, Mr Thomas, whose day job is as an art and print curator with the University of Melbourne, begins by touching up the black and white tones and then sets down the first layer of colour. 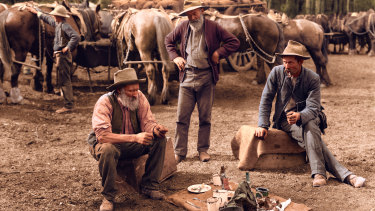 ‘Meal Break for Teamsters and Horses’, probably in NSW, circa 1900.Credit:Museum of Applied Arts and Sciences/Benjamin Thomas 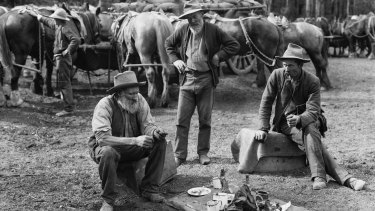 The black and white original. Credit:Museum of Applied Arts and Sciences

Building a sky may begin with a dark blue and be layered with lighter blues, white, creams and greys to capture clouds and the radiance of the sun.

In complex scenes involving multiple human figures and buildings – and these can take more than 20 hours – he may finish with more than 100 layers of colour. 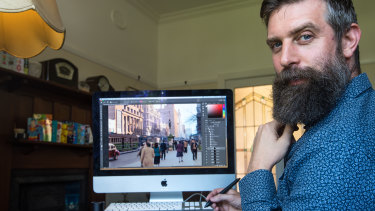 Choosing the right one is simple enough for roads and sky, but buildings and people can be more complicated. If the structures are still standing, Mr Thomas might visit them in person or view them on Google Maps.

Some colour choices are an educated guess based on their known characteristics in black and white photos. Red clothes, for example, often present very dark, he said. 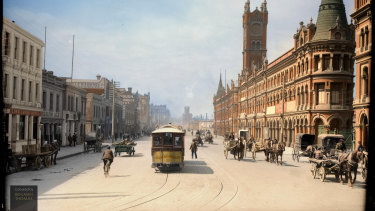 Looking east down Flinders Street with the old fish market (demolished in 1956) in the right foreground, circa 1909. Credit:State Library of Victoria/Benjamin Thomas 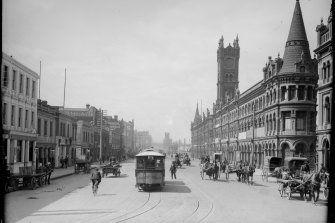 How it was.Credit:State Library of Victoria

“You’ll never be able to say definitively that this black and white shade should be this particular colour, but you also get a very good sense of what would be an authentic palette for that era,” he said. 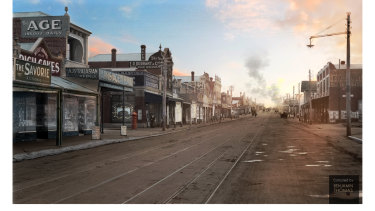 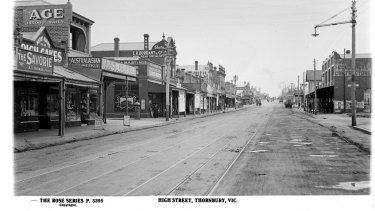 Sometimes descendants of one of Mr Thomas’s subjects will stumble upon his work. This happened for the grateful family of Harold Lanyon, the boy on the rocking horse, and in 2018 Mr Thomas tracked down Aunty Lorraine Wilson and presented her a coloured image of her Ngarrindjeri father, Roland Carter, a WWI digger and prisoner of war. 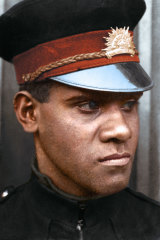 “Suddenly for them there’s a really close personal connection, which has been really heart-warming from my end.”