The king of Thailand has pardoned his concubine after throwing her in jail last year and had her flown to Germany to join his Alpine harem, it is claimed.

Playboy monarch Maha Vajiralongkorn, 68, has spent much of the pandemic in Germany with a reputed entourage of ‘sex soldiers’ assembled as a military unit at a four-star hotel.

According to Bild, they are about to be joined by former royal bodyguard Sineenat Wongvajirapakdi, 35 – who was appointed ‘royal consort’ last year but quickly fell from grace and was stripped of all her titles.

Now, the king is thought to have granted her a royal reprieve – and went to Munich Airport himself to pick her up. 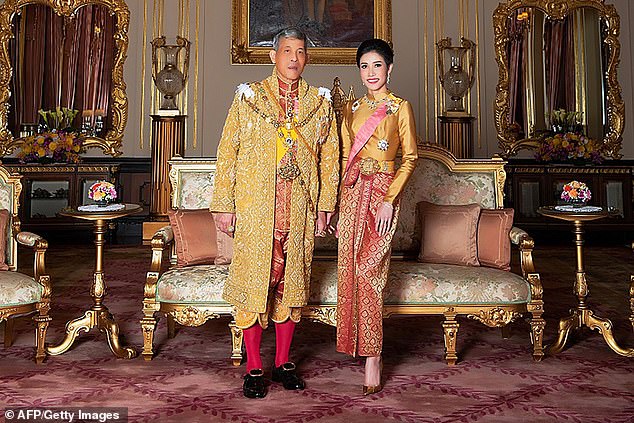 King and consort: Thai monarch Maha Vajiralongkorn appointed former royal bodyguard Sineenat Wongvajirapakdi as his consort last year (pictured together in August 2019) – but she soon fell from grace and was stripped of her titles

Experience: Sineenat had trained as a pilot in Thailand and abroad, served in the King’s royal bodyguard unit, and in 2019 was awarded the rank of a major-general

The consort, also known as Koi Wongvajirapakdi, was gifted the title of royal consort to mark the king’s 67th birthday last July.

It was the first time in nearly a century that a Thai monarch had taken a consort, after the king married his fourth wife Queen Suthida earlier in 2019.

Sineenat had trained as a pilot in Thailand and abroad, served in the king’s royal bodyguard unit, and in 2019 was awarded the rank of a major-general.

During the king’s elaborate three-day coronation ceremony, Sineenat was seen marching in full military uniform in a procession that travelled from the palace to several Buddhist temples.

However, Sineenat was out within three months and stripped of all her titles for ‘disloyalty’ and alleged ‘ambition’ to match the Queen’s position.

Her actions showed ‘she does not give any honour to the king and does not understand royal tradition… her actions are to benefit herself’, a statement claimed.

Koi has apparently been in prison since then, although her exact whereabouts were unclear.

According to Bild, she was in the Bang Kwang maximum-security prison where inmates including drug dealers are constantly monitored with webcams.

The prison is said to include around 1,000 people on death row, and was the venue where Thailand carried out its first execution for nearly a decade in 2018.

Thailand expert Andrew MacGregor Marshall said she had been in a women’s prison at a different compound in Bangkok.

However, he cited palace sources on Friday saying that Sineenat had been released and was due to fly to Germany imminently.

The report by Bild said she was taken straight to the airport and flown to Munich on a private plane, with a refuelling stop in Dubai.

Thailand’s King Maha Vajiralongkorn and Queen Suthida during their wedding ceremony in Bangkok in May last year. According to tradition, the King has a semi-divine status and must be seated higher than those around him

On Saturday morning, the king himself is said to have picked her up wearing his customary tank top at Munich Airport.

The king and his entourage then drove straight to the Grand Hotel Sonnenbichl in the German resort town of Garmisch-Partenkirchen, it is claimed.

Reports earlier this year said the king had booked out the whole fourth floor which includes a ‘pleasure room’ and is decked out with ‘treasures and antiques’ from Thailand.

His ‘sex soldiers’ are said to be assembled as a military unit called the SAS like Britain’s special forces – with the same motto, ‘who dares wins’.

One hotel worker said staff are forbidden from the fourth floor where the king and his entourage have set up camp.

However, the king’s diplomatic immunity means that there is little German authorities can do about it.

Queen Suthida reportedly spends most of her time at Hotel Waldegg in Engelberg, Switzerland, without her husband.

The king is protected from criticism in Thailand by one of the world’s toughest defamation laws, with prison sentences up to 15 years.

However, some protesters have made veiled criticisms by asking what the weather was like in Germany.

A hashtag that translates to ‘why do we need a king?’ became popular in Thailand after an overseas activist posted about Vajiralongkorn’s activities in Germany.

Others have dressed as Harry Potter characters and held up pictures of the series’ villain Lord Voldemort, also known as He Who Must Not Be Named. 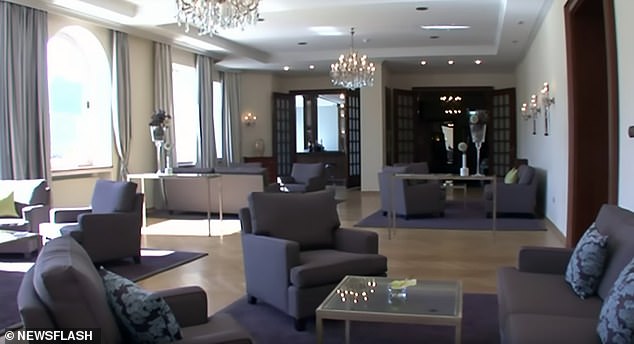 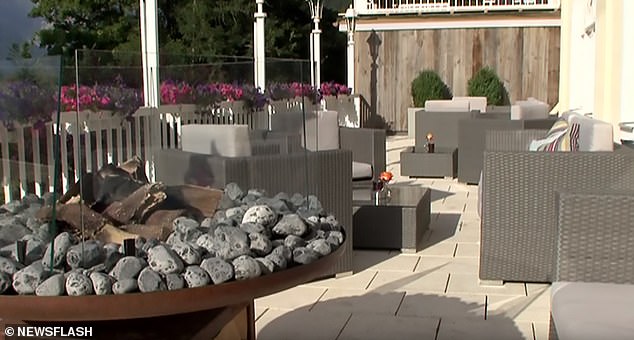 An outdoor area at the Bavarian hotel, where the Thai monarch has been spending much of the pandemic except for occasional visits to his home country 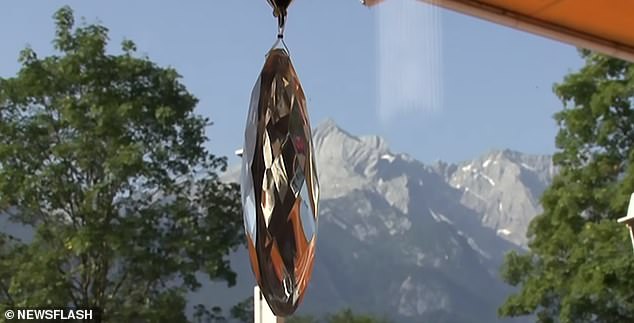 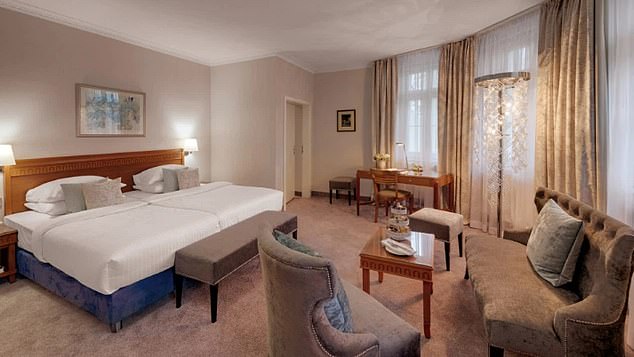 Critics’ demands have included the reversal of a 2019 order that transferred two army units to the King’s personal command, and a 2017 law that gave him full control of the crown’s extensive property holdings.

Estimates of Vajiralongkorn’s personal wealth start at $30billion and he has spent much of his time in Europe.

However, the monarchy is backed by the arch-royalist military, which has staged more than a dozen coups since the end of absolutism in 1932.

While the country has been roiled by decades of political turmoil, the constitution says the monarchy must be held ‘in a position of revered worship.’

Vajiralongkorn succeeded to the throne in 2016 after the death of his father, King Bhumibol Adulyadej, who had reigned since 1946.

The new king was not formally crowned until May 2019 when carried on a golden platform in a six-and-a-half-hour procession through Bangkok.

During the ceremony he was carried on a golden platform in a spectacular six-and-a-half-hour procession through Bangkok’s historic quarter.

Just days before the coronation, the King married his long-term consort and gave her the title Queen Suthida, in a surprise move.

Suthida Vajiralongkorn na Ayudhya, a former Thai Airways flight attendant, had to lie on the floor as she was given a gift by the king during the marriage ceremony.