Dog is scared to DEATH by fireworks: Terrified Labrador – staffie cross, Dexter, 10, collapses and dies after ‘trembling at Bonfire night noise’ despite owner’s attempts at CPR and mouth-to-mouth resuscitation

A family has been left devastated after their beloved pet dog was literally ‘scared to death’ on Bonfire Night.

Judith and Malcolm Watson’s dog Dexter had been shaking and cowering as fireworks were set off around their home in Hemlington, North Yorkshire.

Just after 6pm, a huge bang caused Dexter to run out of the room, then, moments later, Judith found the terrified dog collapsed in the downstairs bathroom.

‘I thought he was just in there trembling at first but he was laid flat out on the floor,’ said Judith, 63.

‘Then I realised he had gone.

‘I don’t know exactly where dogs’ hearts are but I tried pressing his chest and blowing into his mouth. 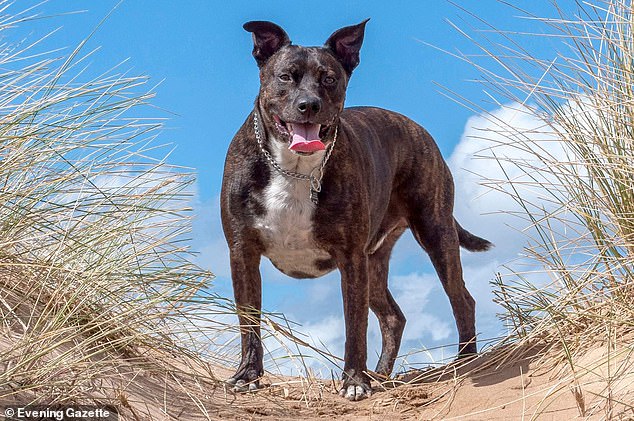 Dexter (pictured), 10, a Labrador staffie-cross, was found ‘laid flat on the floor’ in the downstairs bathroom after running scared from noisy fireworks during Bonfire Night

‘But it was so quick and there was nothing I could do to bring him back.’

On Friday evening, Dexter would usually walk with Malcolm, 67, to the fish and chip shop where he would get a sausage treat.

However, like so many pet owners across the country, the couple had to make allowances for Bonfire Night and keep their nervous pet indoors.

After the much loved dog collapsed, frantic Judith called Malcolm who rushed home.

‘I was screaming and shouting Dexter’s name over and over,’ said Judith.

‘I was just hugging the dog and crying for a long time.

‘At the time I really wanted to hit something. There was that almighty bang then another one came when he had already gone. 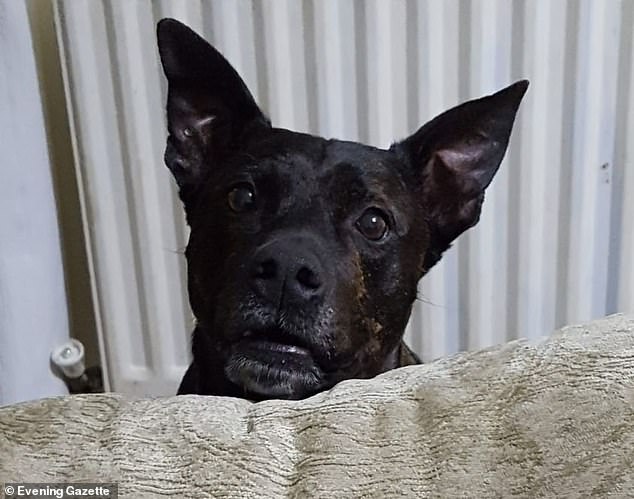 Dexter (pictured) was ‘trembling’ before he collapsed and died during Bonfire Night. Owner Judith Watson, 63, shouted Dexter’s name after finding her beloved dog collapsed on the floor

‘It did die down eventually. And it’s all finished now – people have had their so-called fun but our whole lives have changed.

‘He still had a lot of life left, it’s so unfair and so senseless.’

Some believe unorganised displays should be banned due to distress it causes some animals as well as people who suffer with certain conditions such as PTSD or autism.

A petition calling for an urgent review of fireworks regulations has attracted 828,000 signatures.

Dexter, a Labrador staffie cross, was also a much loved friend of the couple’s two-year-old granddaughter, Liliah-Mae.

How to keep dogs safe during fireworks

She and Dexter were best buddies, said Judith.

‘My son had to try and explain to her he’s gone,’ she added.

‘She came in and said ‘Dexter’s gone’ and held her arms out to my husband.

‘She kept mentioning him during the day and even when we got her home she asked about him again and we had to say ‘no, he’s not here’.’

Dexter was 10 years old and had arthritis but still loved his walkies and going to the beach to play with his ball.

‘He still thought he was six months old – he was so bright and happy and highly energetic,’ Judith continued.

The couple adored their dog and planned their lives around the beloved pet.

Judith works at Tesco in Coulby, Newham, and even worked night shifts so someone would always be at home with Dexter.

He would sleep on the bed with her during the day, alerting her when it was time to get up or a parcel was being delivered.

The couple have a caravan which they used for most of their holidays so Dexter could tag along.

‘So many things are going to change for us. We have lost a member of our family,’ she said.