Teenager, 19, helps convict paedophile uncle who molested him aged four on family holiday to Zante then told him Jungle Book’s Shere Khan would hunt him down if he ever reported him

A teenager has bravely gone public about a ‘Jungle Book’ abuse ordeal he suffered at the hands of his paedophile uncle during a family holiday.

Baillie Blomeley was just four when Simon Holmes, of Stockport, Greater Manchester, molested him while the victim’s mother was out buying breakfast on the Greek island of Zante.

Holmes, then 17, used the Disney movie to warn the youngster he would be hunted down by Shere Khan from the Rudyard Kipling story if he told his family.

He told him after the 2003 attack: ‘The tiger will come get you if you say anything – nobody will believe you.’ 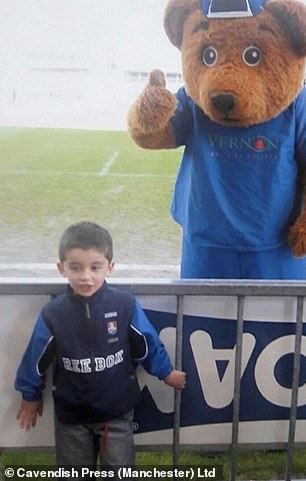 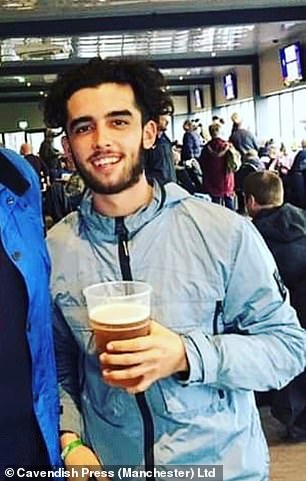 Baillie Blomeley (left, aged four when the abuse took place, and right, now, aged 19) was molested when his mother was out buying breakfast on the Greek island of Zante

The youngster was initially too terrified to tell anyone of his encounters with ginger haired Holmes but went to police in 2016 vowing to get justice.

Later during a trip to Disney’s Animal Kingdom Theme Park in Florida, the sight of ten Bengal tigers in their pens triggered horrific memories.

In December, Holmes, now 32, was convicted of eight sex offences at Minshull Street Crown Court, Manchester, and was jailed for four years after Mr Blomeley now 19, testified against him.

Afterwards the victim, a roofer, waived his right to anonymity and said: ‘I used to love Jungle Book when I was kid and watched it all the time but he used the Shere Khan character as he was ginger to threaten me. 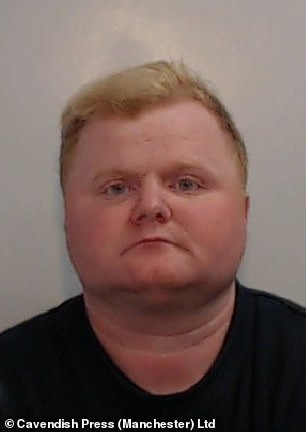 In December Simon Holmes (pictured left and in his police mugshot, right) was convicted of eight sex offences was jailed for four years after Baillie, now 19, testified against him

‘Even to this day I can’t look at orange tigers. When I was at Disney’s Animal Kingdom I was looking at my phone and then looked up and the next thing I knew I was staring at about ten tigers that were all orange. I just broke down in tears. The sight of a tiger great affects me.’

He added: ‘During the trial, he’d smile at me. He looked smug like he’d got away with it. The day before he got kept on remand and read out his statement, he winked at me. He was reading his statement and I thought this is just pure, pure lies.

‘His story didn’t add up, when you tell lies the lies catch up to you. He’s changed his story so many times over the three-year investigation, but my story is solid. 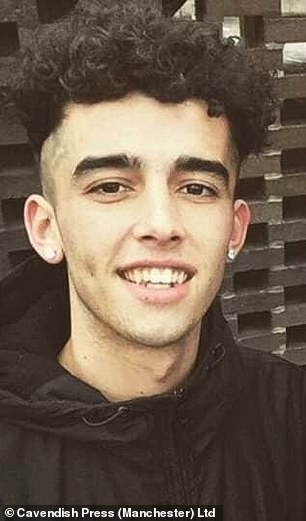 ‘I had to share this for me because I want all of his neighbours, all of his work colleagues, to know what he did. I hoped that if I put it out there then other people might come forward. Coming forward is the best thing you can do.’

The incidents occurred in 2003 after Holmes, who lived with Baillie’s grandmother was invited to the holiday by the victim’s unsuspecting mother.

Whilst staying in a hotel the pair were left alone together on four occasions whilst Baillie’s mother went to a local shop.

Violated and confused, Baillie returned home and his family life carried on as it usually would and he didn’t tell anyone about the attacks until he was a teenager.

He said: ‘Everything was normal with him before we went on the holiday and he was just part of the family.

‘It was just me, my mum and him on this holiday and I remember what he did to me, I remember a few details of the holiday, but I don’t remember it all. What he did however has stuck in my memory.

‘My mum only left the hotel room to get food and stuff like that – that’s when it would happen. When I was growing up, after that holiday nothing got said. I still saw him pretty much every day, he lived at my nana’s house.

‘I was there all the time, every day after school I’d go there. It just carried on as if he was a normal part of my family. I kept my mouth shut because I didn’t want to upset my nana. But I reported it in 2016 because thought he’s not getting away with this. My nana and grandad disowned me.’

In court Holmes who denied indecent assault blew a kiss at two of his family members as he was sent down to the cells. 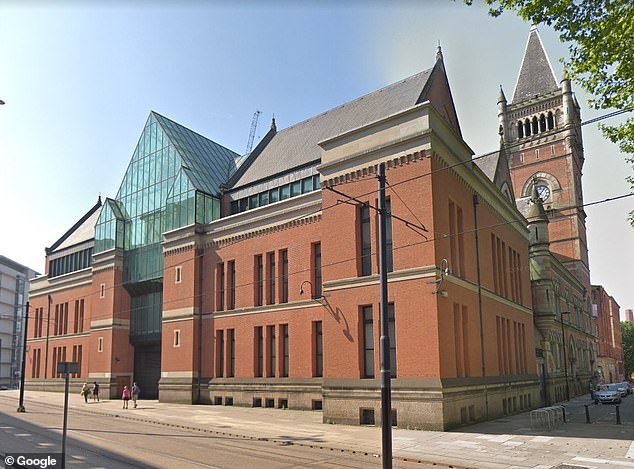 Earlier he listened from the dock as Baillie read an emotional victim impact statement saying: ‘I want to close this chapter in my life, no sentence he receives today will be long enough for me.

‘You destroyed my childhood, I feel like I’m stuck in a hole I can’t climb out of. You will never understand the damage you have caused me, and not just to me but for everyone else you have abused over the years. I have depression and you are the source of the problem. I tried to accept what you did to me and move on. I try to escape from the pain you have caused me.

‘I’ve told my story of what you did to the wonderful world of social media, now all of your family, your employer, your neighbours, they all know what you are and forever you will be known as Simon John Holmes a child sex offender.

‘Take a good look at me and wink at me again. I will be holding my head up high and walking out of this court room and having a beer with my mates tonight while you will be looking over your shoulder in prison. I hope you suffer as I have and still do.’

‘You threatened the boy that nobody would believe him if he told, you used your greater age to deter him from complaining to anybody about this.

‘I must sentence you on the basis that you have led a decent and hard working life and I must give you significant credit for the fact that you were only just 17 and had just left school. You were extremely emotionally and sexually immature at the time that this happened.’

Holmes was also ordered to sign the Sex Offenders register for life.