Melbourne-based teachers are being offered $700 a day to work casual shifts in country Victoria as regional schools grapple with a “dire” staff shortage that one veteran principal says is as bad as he has seen.

The shortage is mostly attributed to illness from influenza and COVID-19, but education leaders said structural shortages were also at play, with some schools chronically unable to recruit enough teaching staff. 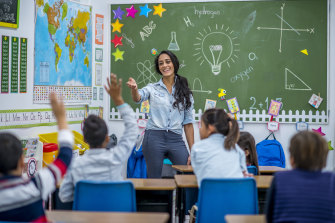 Schools in regional Victoria are grappling with severe staff shortages.Credit:iStock

One principal said he had been forced to leave some teaching roles unoccupied indefinitely this year as job advertisements went unanswered.

In response to the shortage, recruitment agency anzuk has this month begun spruiking the $700-a-day casual teaching roles, which are subsidised by Victoria’s Department of Education and Training.

The financial incentive is in place for the remainder of term two, “with the likeliness to continue into term three”, the agency said.

“Education has been significantly impacted by the effects of the pandemic,” anzuk recruitment team leader Tenielle Henderson wrote. “Whilst schools across the state have all been affected, schools in regional Victoria have been hit the hardest.

“To address this, the Department of Education has brought in a new financial incentive to help teachers from metro Melbourne to support schools in regional Victoria. The financial incentive will cover the costs incurred to travel plus some extra spending money.”

Victorian Principals Association chief executive Andrew Dalgleish said there was a shortage of teaching staff in regional Victoria and in Melbourne’s northern and western suburbs, and a need to attract more students into teaching careers.

“We keep talking about raising the status of the profession as a way to attract more [people into teaching], but it’s not seeming to occur as quickly as we would like,” he said.

Anthony Rodaughan, principal of Kurnai College in Morwell, said the school had found it harder to fill teaching roles this year than ever before.

“We are getting no applicants for positions we are advertising. English, humanities, usually we’d get several applicants, and we have got none,” he said.

The staff shortage had been compounded by illness and absenteeism, with about 30 teachers away at one point in term one, he said. The high number of absences had forced staff who were not off sick to take on extra roles, leaving them exhausted as term two neared its end.

“The teachers that aren’t sick are taking extra classes, so their energy levels drop,” he said. “The whole place becomes thinner and thinner, so some people need a mental health day, they just need to get out, and that leaves a hole someone else must fill, so it can spiral.”

Rodaughan said the department was supporting schools as well as it could.

Darren Egberts, principal of Sacred Heart College in Kyneton and president of the Principals Association of Victorian Catholic Secondary Schools, said the teacher shortage in regional schools was “dire” and “one of the more serious issues I have seen in my time”.

He predicted that if it continues in term three more schools may resort to combining classes or directing some students to learn from home.

“For schools across the board, our first port of call for replacement teachers is our CRT [casual relief teacher] stock or recently retired teachers, and as people have chosen not to return or get out of the profession after COVID, that stock has declined.”

Egberts said Catholic schools in more remote parts of the state, such as the north-west, had an even tougher time attracting new teachers because they could not offer the financial inducements the department does.

Melbourne-based teachers who are prepared to make a longer-term move to a regional government school can receive initial payments of up to $50,000.

An Education Department spokesman said paying relief teachers a daily rate for travel, accommodation and meals to offer short-term support was just one part of its efforts to help schools.

He said 15 teachers were deployed to schools in Shepparton, Wodonga and Wangaratta in the first two weeks of the scheme.