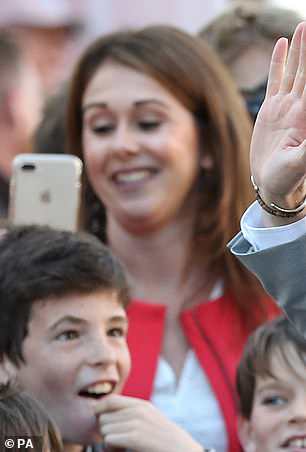 Charlotte Sleep, a teacher at Westbourne House School in Chichester, took 13 of her pupils to meet Harry and Meghan today

This is the school teacher who made Prince Harry laugh and comically attempt to pull away from her after she refused to stop shaking his hand.

Charlotte Sleep, a French teacher at Westbourne House School in Chichester, had taken 13 children to meet the Duke and Duchess of Sussex in the city today.

The children hand-made the royals an A-Z guide to Sussex, their new namesake – an A3 book which featured everything from Arundel to local celebrity Zoe Ball.

Meghan was first to meet the pupils, smart in their red and grey uniforms.

She said she wanted to shake each one’s hand individually and find out their names, adding: ‘So, why aren’t you in school? Are you on a school trip?’ 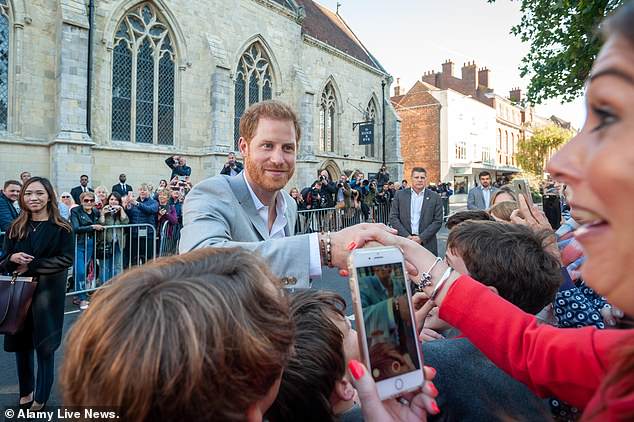 ‘This is my beautiful Year 6,’ Ms Sleep said. ‘They are form captains and deputy form captains and they made you, to help you with your travels around Sussex, an A-Z about where to go, what to eat and what to do. And we’ll be quizzing you at the end!’

‘Cool,’ said Harry. Meghan was handed the guide by Alex Witcombe and George Baker, both ten. ‘Oh my goodness, guys, thank you, that’s very cool. It’s an A- to Zee (pronounced the American way).’

Ms Sleep said: ‘We thought we would tell you some great places to go when you are in Sussex. Please do come again, we love having you.’

Harry had immediately spotted the youngsters and exclaimed: ‘You’ve got a very, very similar school uniform to the one I had when I was at Wetherby School in London, all those years ago. Are you on a school trip?’ 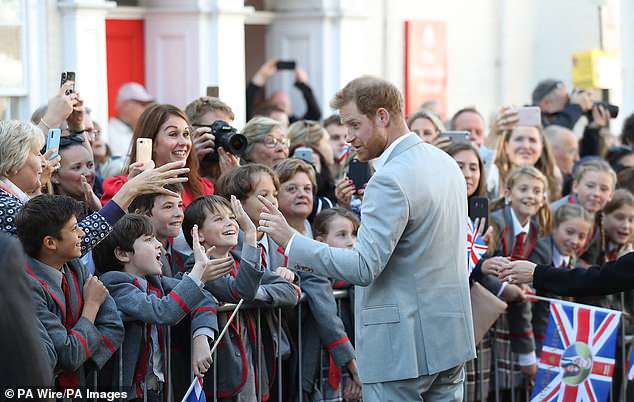 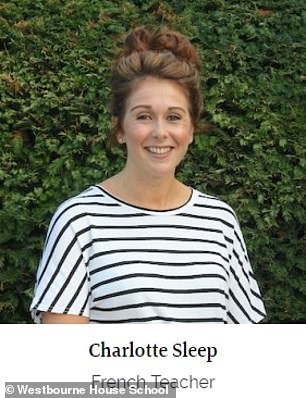 Ms Sleep has a degree from the University of St Andrews, where Prince William met Kate

‘What, because you are here?’ exclaimed the prince, and enthusiastically high-fived him. ‘The fact that you got off double Latin because we are here. I think that’s fantastic.’

He added hurriedly: ‘Although education is important!’

Later, Miss Sleep added: ‘They may be going to Chichester, Bognor and Brighton but we wanted to show them there are a lot of other places in between which they can hopefully visit next time.

‘They’ve missed their Latin test which they’re happy about. But they’re keen to get back for football this afternoon!’

Speaking to MailOnline this afternoon, Ms Sleep said the book featured famous people, foods and animals from the county, such as the Sussex Spaniel.

She said of meeting Harry and Meghan: ‘It was just fantastic. They were so lovely. Harry came straight up to the group and said your uniform looks like my old one.

‘He spoke to each one of them, he shook all of their hands – the kids really enjoyed getting to know him

Meghan was the same, she took so long looking through the book. The kids were missing a Latin lesson to be there – and harry was like “high five for that”.

‘They were absolutely buzzing – I told them yesterday they were going.

‘They were literally screaming – and they haven’t stopped talking about it. One of the kids said it was the best day of their life.

‘Harry shook hands with me and I took a very sharp intake of breath and started going completely gobbledygook. The kids found that hilarious – and they keep winding me up about that.

It was absolutely amazing. I remember watching their wedding and wanting to be there – but seeing them today meant more because they were on our home turf.

‘I was really proud to have met them. Roll on their babies – they’re going to be fantastic parents because they were so good with the kids.’

Ms Sleep’s profile on the Westbourne School website reveals she has a 2:1 in Italian and Spanish from the University of St Andrews.

The university is where Prince William met his future wife, Kate Middleton. Ms Sleep also has a PGCE in modern languages from the University of Sussex.

She previously taught in China where she founded the Prep School at Harrow School, Shanghai, and says in her staff profile: ‘I love teaching French (and Spanish and Italian!) as a languages classroom is such a fun place to be for all pupils.

‘The French language introduces pupils to a rich history and culture and speaking this beautiful language helps young people gain in confidence.

‘I shall also be coaching some games. I fell in love with sport primarily at Prebendal and latterly at Lancing and at the University of St Andrews.’

She describes herself as an avid netball player and cricketer, and was captain of Girls’ Hockey at Lancing.