A taxi driver has been awarded more than $1.5 million for life-long brain damage from a carbon monoxide leak that a company didn’t pick up on, despite another taxi driver dying in the same vehicle the night before. 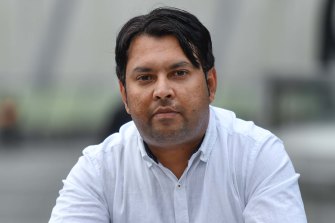 Muhammed Shahid was awarded more than $1 million after carbon monoxide leaked into his taxi. Credit:Joe Armao

In a judgment given on Thursday, Supreme Court Justice Stephen O’Meara held Alpha Trading Engineering, which operates as Capital City Taxis, liable for the tragedy, finding the surviving driver, Muhammed Shahid, was owed a duty of care and that the injuries he suffered were forseeable.

“The effect of the brain damage suffered by the plaintiff cannot be underestimated,” Justice O’Meara said.

Mr Shahid was working the night shift on September 3, 2013. He was effectively an independent contractor, driving under a bailment agreement with the owner of Capital City Taxis, Nasir Choudhary.

No one told him that another driver, Sandeep Brar, was found dead in the taxi less than 24 hours before, the court judgment read. The taxi was not inspected afterwards.

Mr Shahid was later found unconscious in the taxi, parked in a rank outside Crown casino. He had suffered a heart attack, hypoxia and an acquired brain injury.

Before his injuries, Mr Shahid, who moved to Australia from Pakistan, was studying automotive technology and planned to apply for permanent residency. He used to play cricket and badminton.

Mr Shahid told the court that after the incident, he had to learn to speak and drive again. He said his English was previously perfect, but now he needed help with simple tasks such as ordering in a restaurant.

Justice O’Meara said the impact was plainly apparent during Mr Shahid’s evidence to the court.

“His sentences were sometimes incomplete and he was often lost for ideas or words. He was a very vague historian and witness generally,” Justice O’Meara said.

“That said, he had a pleasant manner, and he impressed me as a witness of truth who made every effort to give evidence without in any way embroidering his account.”

Mr Shahid now works as a security guard because he doesn’t have to “speak too much”, he said.

Mr Shahid, who provided a statement through his lawyers at Maurice Blackburn, told The Age he was pleased with the court outcome.

“It has taken eight years and six days,” he said. “It was a hard time for me and I had nothing in my hand. I am happy. I spoke to my mum and told her: ‘Mum, we win.’ She told me they prayed all night.”

Maurice Blackburn senior associate Patricia McMullan said the money did not undo the harm, but it provided comfort to her client and his family that he had financial security. 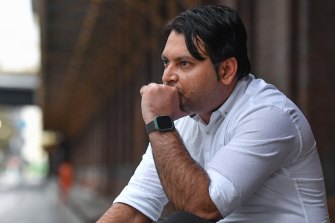 “The negligence in this case was so clear and so obvious, the circumstances are terribly tragic,” Ms McMullan said.

“Our client is a wonderful man, a gentle soul. He had big dreams for his life in Australia, in our land of opportunity, but those dreams have been destroyed.”

Although it wasn’t initially known how the first taxi driver, Mr Brar, had died, Justice O’Meara said the striking and unusual circumstances of the death of a man in his 30s in good health should have rung alarm bells.

“It should have been forseeable to a reasonable, cautious and prudent person in the position of Mr Choudhary that the condition of the vehicle might conceivably present a serious risk to the health of a subsequent driver or passenger,” Justice O’Meara said.

It was later discovered that taxi M2081 had a complete severance, or rupture, of the tailpipe from the rear muffler. Significant quantities of carbon monoxide had seeped into the car.

While Mr Shahid bought his own uniform and was required to return the taxi with a full tank of petrol after each shift, the company was responsible for maintaining the vehicle, according to Justice O’Meara.

The case was defended by the Transport Accident Commission, which indemnified Mr Choudhary’s company because it was a road accident.

Justice O’Meara rejected the TAC’s argument that no such duty had been breached because no risk of injury was reasonably forseeable. Mr Shahid, the defence argued, had otherwise been provided with a taxi that was reasonably and properly inspected, serviced and maintained.

Mr Choudhary, who The Age attempted to contact on Friday through his company, said in his evidence that police told him Mr Brar’s death had looked like a heart attack.

Asked why he didn’t arrange an inspection of the taxi afterwards, Mr Choudhary said: “Because the reason of his death was his medical condition. That’s why it did not come into my mind that something could be wrong in the car and that can have some problem.”

Justice O’Meara awarded $450,000 in damages and about $1.1 million in loss of future earning capacity.

Mr Brar’s widow sued the same company in 2017. After his death, the coroner also recommended the Taxi Services Commission consider mandatory carbon monoxide monitoring periodically, as well as warning drivers to turn their engines off while resting.

The commission, now called Commercial Passenger Vehicles Victoria, said there had been extensive regulatory reform over the past five years to improve safety.

“Safety is our number-one priority; we want everyone in our industry to be able to operate safely,” Sofia Hancock, the director of legal and governance said.

The Age was told by a source not authorised to speak publicly that Capital City Taxis was no longer registered as a booking service provider.