Homicide squad detectives have arrested a man over his alleged involvement in the killing of 23-year-old Rami Iskander.

Iskander was shot dead in May, two weeks after his uncle, gangland figure Mahmoud “Brownie” Ahmad, was shot dead.

Rami Iskander (left) was shot dead in Belmore in the early hours of May 14. He was the nephew of Mahmoud “Brownie” Ahmad, who was killed in a shooting just weeks earlier.Credit:Facebook

Following investigations by Taskforce Erebus, which was set up after Iskander’s death to de-escalate a wave of gang violence in Sydney, police executed a search warrant at a home in Oatley, in Sydney’s south, on Saturday morning.

A 41-year-old man was taken to Kogarah police station, where he was charged with a number of offences, including accessory to murder, knowingly dealing with proceeds of crime, participating in a criminal group and contributing to criminal group activity.

A 38-year-old woman was arrested in Kyle Bay, also in Sydney south, as part of the investigation. She was charged with knowingly dealing with the proceeds of crime and participating in a criminal group.

Police seized $500,000 in cash and “items relevant to the investigation” during the arrests. 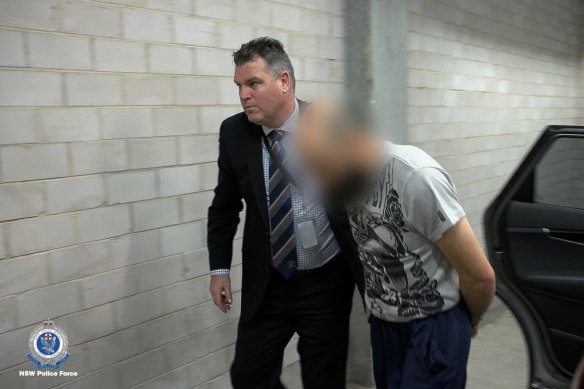 A 41-year-old man was arrested and taken to Kogarah police station on Saturday over his alleged involvement in the death of Rami Iskander.Credit:NSW Police

At least two gunmen shot Iskander dead on the driveway of his home in Knox Street, Belmore, on May 14. Two torched vehicles were found in the nearby suburbs of Croydon Park and Bexley North.

It was two weeks after the death of his uncle and the same week Comanchero sergeant-at-arms Tarek Zahed and his brother Omar were sprayed with bullets at Auburn’s Bodyfit gym.

“We’ve clearly got a war of sorts in south-western Sydney around drug supply and organised crime that crosses over with inter-family relationships,” said State Crime Command director Detective Chief Superintendent Darren Bennett at the time. “We know how violent these people are.”

Detectives were exploring theories that Iskander was involved in the attack on the Zaheds and was killed as revenge. He also may have put a target on his head by threatening to avenge his uncle’s death, detectives speculated.

Taskforce Erebus was set up following Iskander’s death to probe the links between the fatal shootings across south-west Sydney and other criminal activities including prohibited drug supply and vehicle theft.

The man arrested on Saturday was refused bail. The woman was granted conditional bail and will appear at Sutherland Local Court on November 1.