Swarovski loses its sparkle: Plunging profits caused by the pandemic and Chinese competition sparks a bitter family feud within the £2.5bn crystal empire

Crystal-studded clouds reflected in a pond, an oversized crystal chandelier surrounded by mirrors: The headquarters of the Swarovski crystal empire are every bit as glitzy as you might expect – but the sparkle can’t distract from a bitter family feud over the company’s future.

Disruption caused by the pandemic coupled with stiff competition in China means that profits are forecast to plunge by 30 per cent this year, leaving the 125-year-old company with tough decisions to make about its future.

CEO Robert Buchbauer – the great-great grandson of founder Daniel Swarovski – has a plan which involves sacking 6,000 staff, closing 750 stores, and moving the brand upmarket into more expensive and colourful products.

But he is being opposed by other family members who also sit on the board –  Paul, Nadja, Helmut and Gerhard Swarovski – who accused him of ‘steering the ship towards a reef’.

Buchbauer has the support of a majority of sharholders, but his rivals claim they have enough to force a veto and are willing to go to court over it. In the long-run, they want him gone from the company. 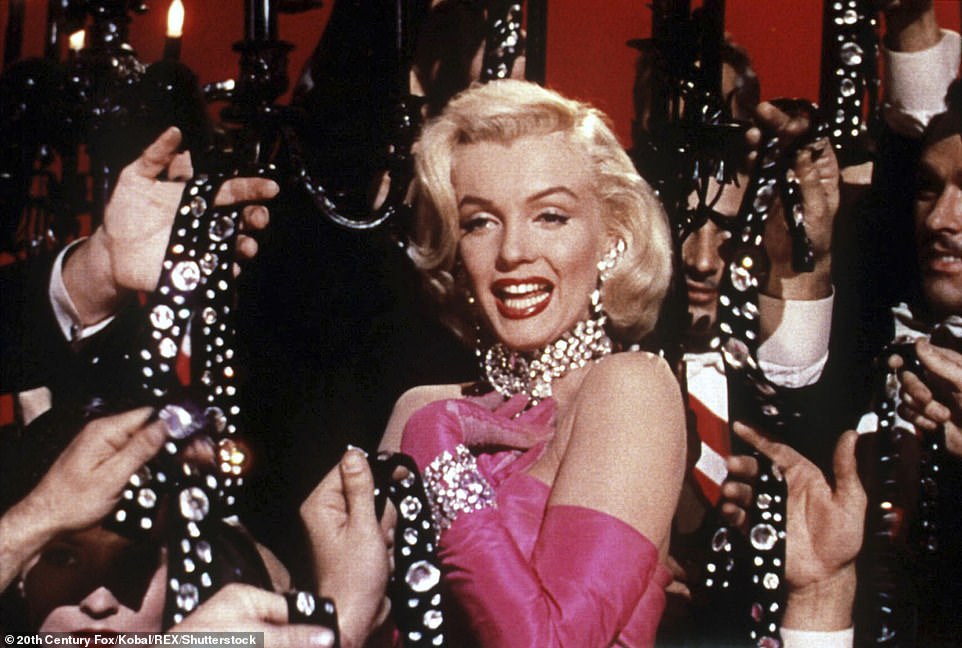 Swarovski crystals, long-beloved of the rich and famous such as Marilyn Monroe, are facing an uncertain future amid chaos caused by the pandemic and stiff competition from China 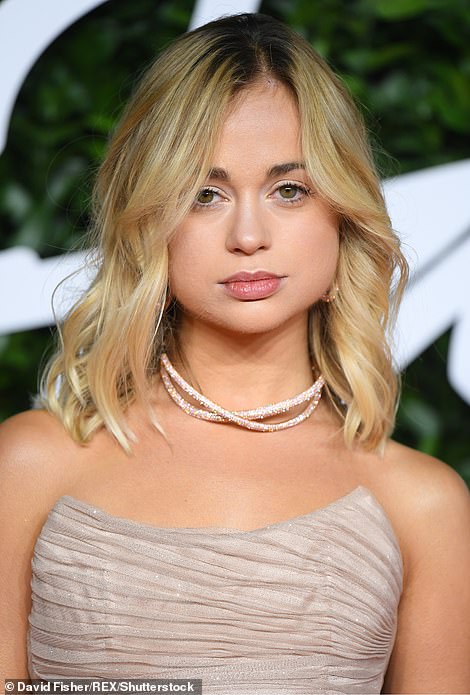 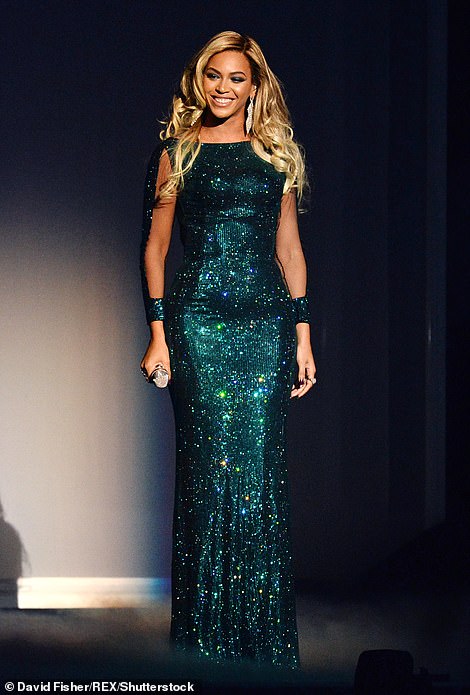 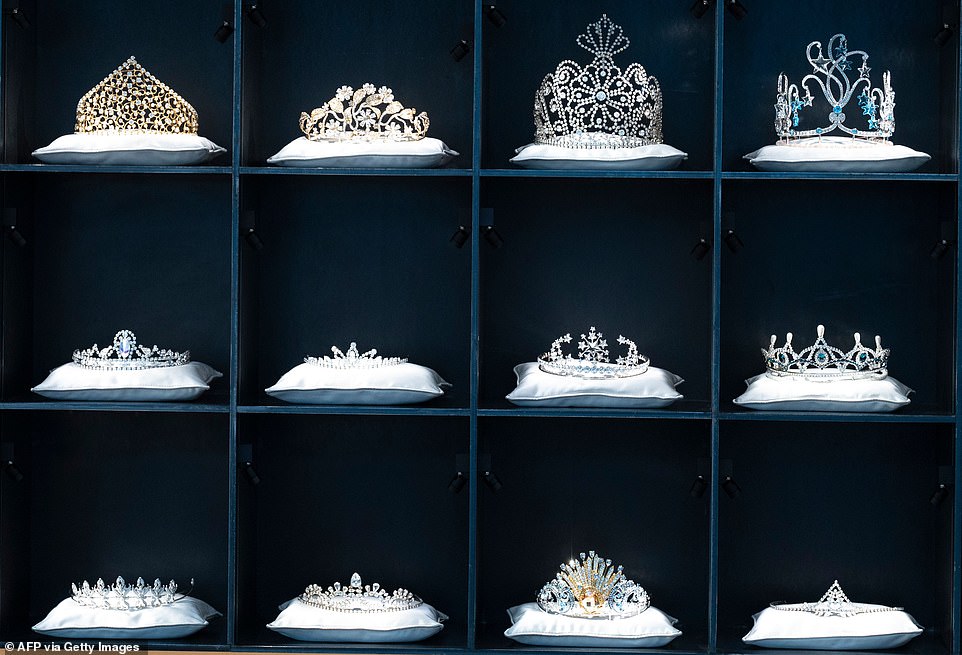 Tiaras made of crystals are displayed at the Swarovski Crystal Worlds (Kristallwelten) museum, near the plant of Austrian crystal glass manufacturer Swarovski in Wattens, Austria, 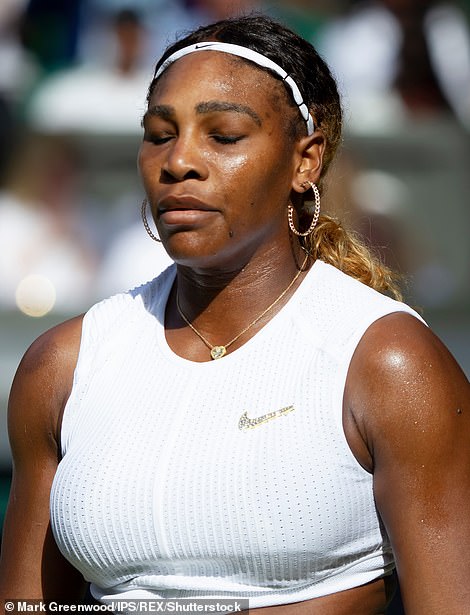 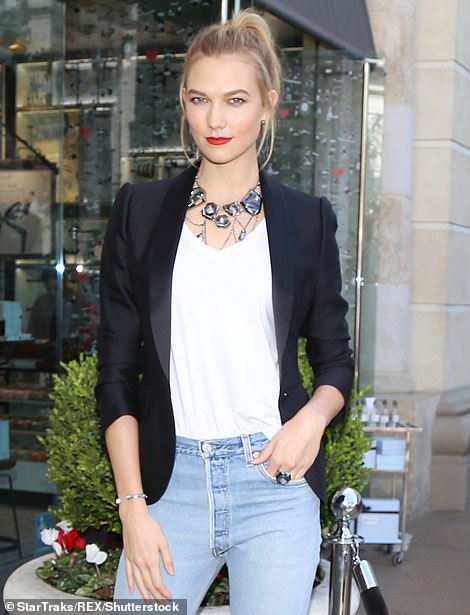 Left: Serena Williams wears a Nike shirt with the logo picked out in Swarovski crystals during Wimbledon in 2019. Right: Karlie Kloss, dressed in Swarovski jewellery, stands outside a store in Los Angeles in 2016

‘We are forced to reimagine and rescale our entire Swarovski business,’ Buchbauer tells AFP at the Wattens HQ, framed by a selection of Swarovski-embellished robes.

Swarovski’s crystals may have adorned the outfits of celebrities like Beyonce and Marilyn Monroe and been used by designers including Christian Dior, but Buchbauer says among business clients they are losing their lustre.

Crystals made by competitors in China sparkle just as brightly – for as little as one percent of the price.

To this already ruinous competition, Buchbauer says, the pandemic has added ‘sales shortfalls on a gigantic scale’.

Overall revenues for crystals are projected to plummet by 30 per cent, from £2.5billion last year down to about £1.7billion this year.

He wants to make Swarovski’s crystals more exclusive, producing fewer, larger and more colourful products that can be sold at a higher price.

Mass-market products like manicure sets and mobile-phone cases graced with Swarovski crystals may have given the company a wide appeal, but they have no place in the future, he says.

The downsizing will also mean laying off about 6,000 employees.

The plans are already under way, with about 1,200 employees in Wattens losing their jobs this year and a further 600 posts expected to go in 2021.

Unless his plans are executed in full, Buchbauer says, ‘we’ll end up among the losers.’ 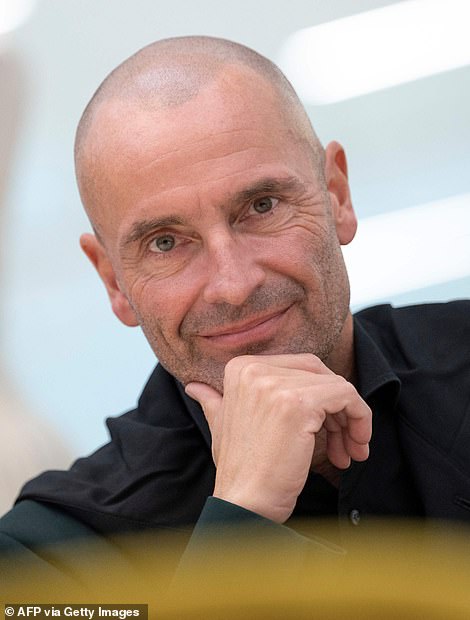 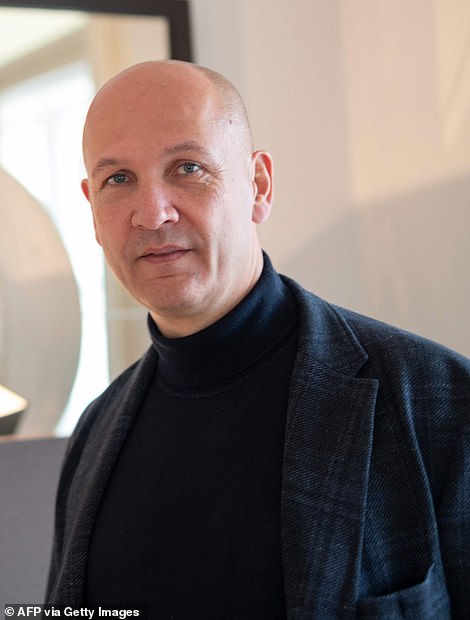 Swarovski CEO Robert Buchbauer (left) wants to overhaul the company and move it uparket, but he is being opposed by family members led by Paul Swarovski (right) who accused him of steering the firm ‘into a reef’ 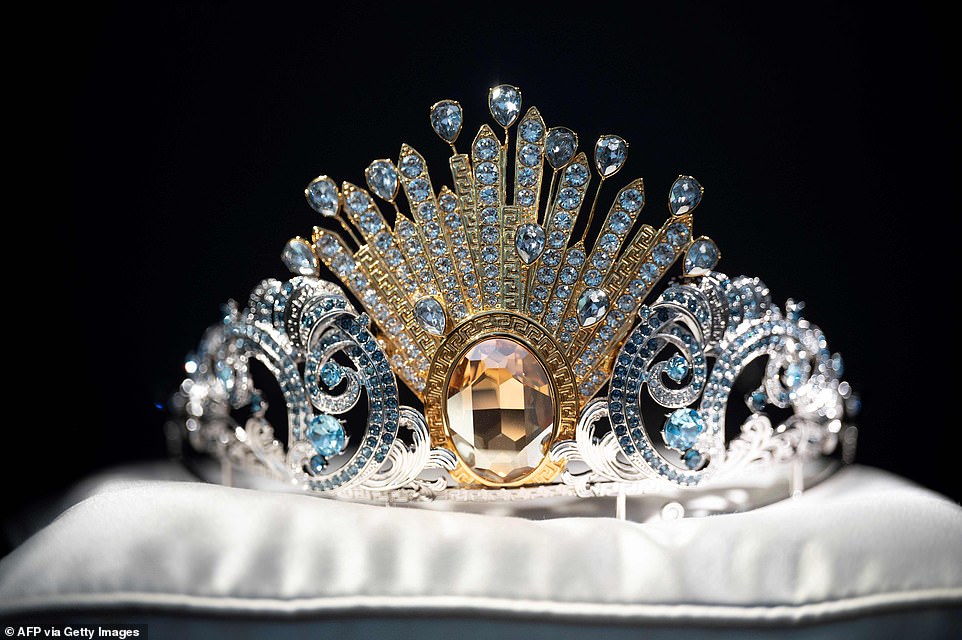 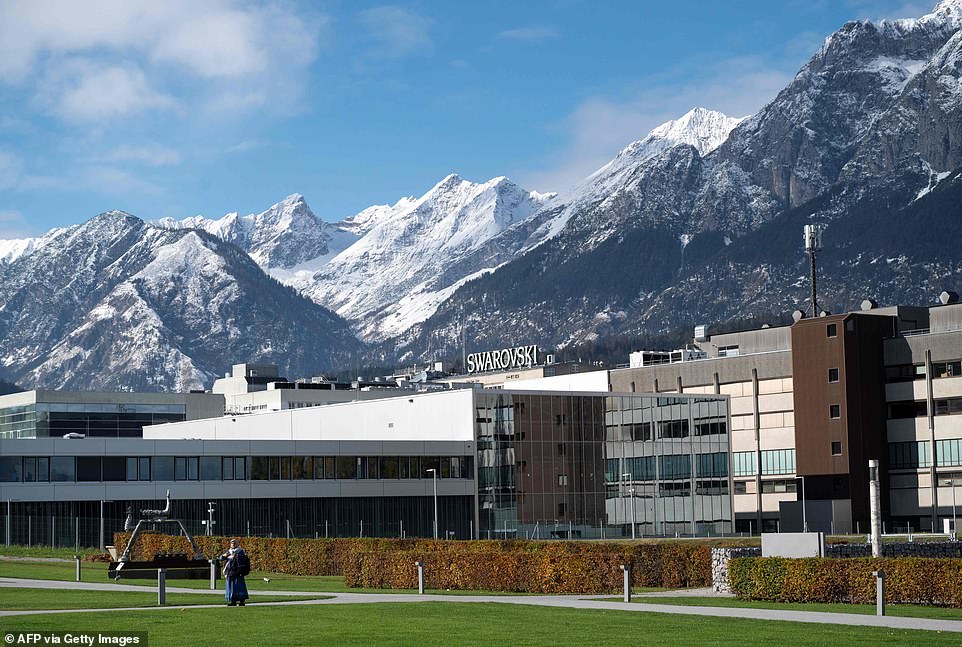 The plant of Austrian crystal glass manufacturer Swarovski in Wattens, Austria, where it has been located for 125 years

Other clan members are convinced that customers who have already been turning to cheaper competitors won’t pay higher prices.

Paul Swarovski, a shareholder and former member of the executive board, says he wants to stop Buchbauer’s plans ‘before everything goes down the drain’.

He’s been joined by Nadja Swarovski, one of three members of the executive board, as well as her father Helmut and her uncle Gerhard.

In the cut-throat luxury goods industry, Swarovski is one of few entirely family-owned businesses left run as a limited partnership.

Initially this was a useful structure for a small-scale manufacturer but all sides agree it is now an impediment for the international, multi-billion-euro operation.

Buchbauer, who became Swarovski’s first ever CEO in April, won approval from shareholders for his own proposal which would bring the Wattens operations under the umbrella of a holding company.

The plan won the backing of family members holding around 80 percent of shares – a ‘legally effective’ decision, says Buchbauer, who stands to gain more power from the change.

Nadja, Helmut, Gerhard and Paul Swarovski and others objected, saying that the roughly 20 percent of shares they hold gives them veto power.

They have filed for arbitration, hoping that Buchbauer’s move will be nullified. 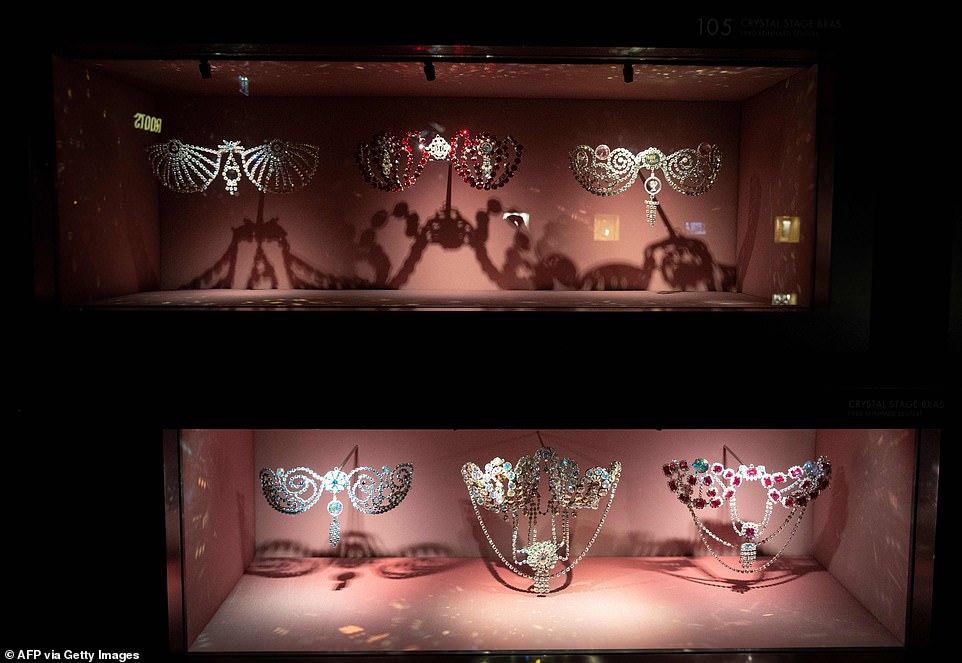 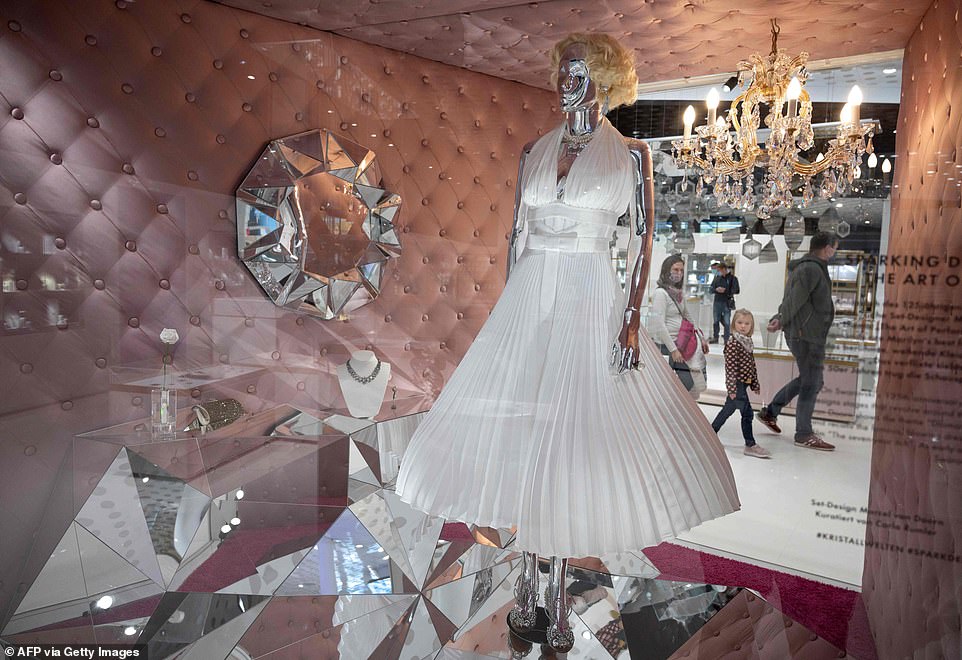 Visitors walk past a boutique with a Marilyn Monroe styled dress and other objects near the plant of Austrian crystal glass manufacturer Swarovski in Wattens, Austria 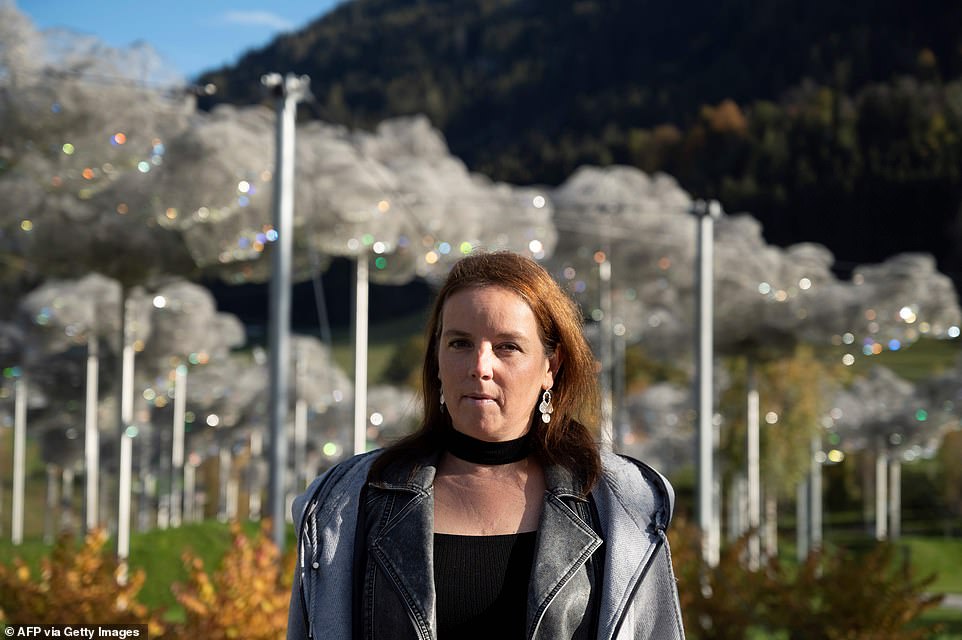 Selina Staerz, union representative at Swarovski, say that staff no longer feel central to the company. Ill-feeling has also been caused by Swarovski family members continuing to live plush lifestyles, as people lose their jobs

‘As long as the captain who is steering us toward a reef has his hands at the tiller, one has to make sure to get him away from the tiller,’ he says.

Meanwhile, members of the clan posting photos of luxury holidays on social media or descending from helicopters for meetings in Wattens have only added to the frustration and disbelief of employees, says union representative Selina Staerz.

‘We don’t feel like we are the heart of the company anymore,’ Staerz told AFP in between advice sessions for laid-off staff.

In a region otherwise dependent on tourism where Swarovski is the single largest employer, ex-employees may struggle to find new jobs.

Though Buchbauer says no further cuts would be necessary after 2021, rumours persist that the whole operation will be transferred to neighbouring Switzerland.

Either way, Staerz says, people have lost faith in an employer once lauded for providing benefits like childcare and housing.

Moreover, she says many staff don’t believe that Swarovski will succeed in becoming an affordable luxury brand.

‘The super wealthy don’t need our Swarovski crystals. They can buy diamonds,’ she says.