Cedar Meats abattoir, the site of Victoria's first major COVID-19 outbreak, could be sold off amid claims the company walked away from an $11.3 million loan.

The company disputes the allegations, contained in a writ filed in the Supreme Court this week, with a spokeswoman saying the company "won't be paying for something that didn't happen". 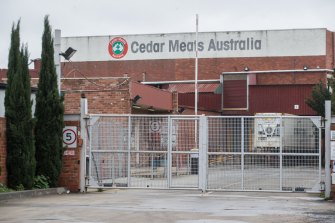 Cedar Meats was at the centre of a coronavirus outbreak that took off in April 2020 and infected more than 110 people. Credit:Simon Schluter

The abattoir, in the western Melbourne suburb of Brooklyn, became a focal point during the pandemic's early months, when staff and their families were infected with COVID-19.

It became the largest coronavirus outbreak in the state's first wave and more than 110 people connected with the meatworks were eventually infected.

Mortgage management firm Aster Capital alleges that Cedar Meats and its guarantors had agreed to pursue an $11.3 million loan on October 26 last year.

But the abattoir pulled out the next day, or did not intend to proceed, Aster Capital alleges, but is still liable for $879,905 worth of fees and charges which have yet to be paid.

Cedar Meats disputes that it entered into the agreement and has already rejected a $339,000 settlement offer from Aster Capital, a spokeswoman said.

"Cedar Meats, like every other business, approaches brokering firms and finance institutions as part of running its business," she said.

"In this case, the documents with Aster were never fully executed. They were partially executed – specifically one signature – the [chief financial officer's] was on the offer – as part of the discussions, but the documentation would have required three others to sign them."

The spokeswoman said it was Aster Capital's prerogative to take legal action, but said there was no avenue for them "to receive payment for something that didn't happen".

"There is simply nothing to this [other] than a brokering firm being opportunistic and having no standing whatsoever," she said.

The Cedar Meats outbreak put the spotlight on Victoria's contact tracing system in May last year.

The Department of Health and Human Services first contacted the company on April 27.

Despite the government initially ruling out a link between the first case and subsequent infections, Chief Health Officer Professor Brett Sutton said in mid-May the cases may have been linked.

On April 29 he ordered the site to close by May 1 and later admitted he should have taken this action after the April 26 case.

The Age has previously reported that Cedar Foods (Aust) Pty Ltd, which was used between 2012 and 2016 to provide day-to-day operations for Cedar Meats, collapsed in 2016 and left behind a multimillion-dollar debt to the Australian Tax Office and unpaid invoices related to WorkCover claims.