The U.S. supply chain has seen its share of issues in recent years: coronavirus pandemic-related supply snarls, trade wars, and ongoing conflict between Russia and Ukraine.

More recently, the Port of Oakland faced a more domestic headwind: Trucker protests. The truckers — who are now restricted to designated “Free Speech Zones” under threat of citation — are protesting California labor law AB5, a law passed in 2019 stating that independent contractors have to pass an “ABC” test to be classified as such.

And while California’s third-largest port resumed operations on Monday after a week-long disruption, the underlying issues related to regulation of the gig economy remain.

“There are some protesters out there, but they’re in the penalty box,” Bill Aboudi, a trucking company owner who supports the protests, told Reuters. 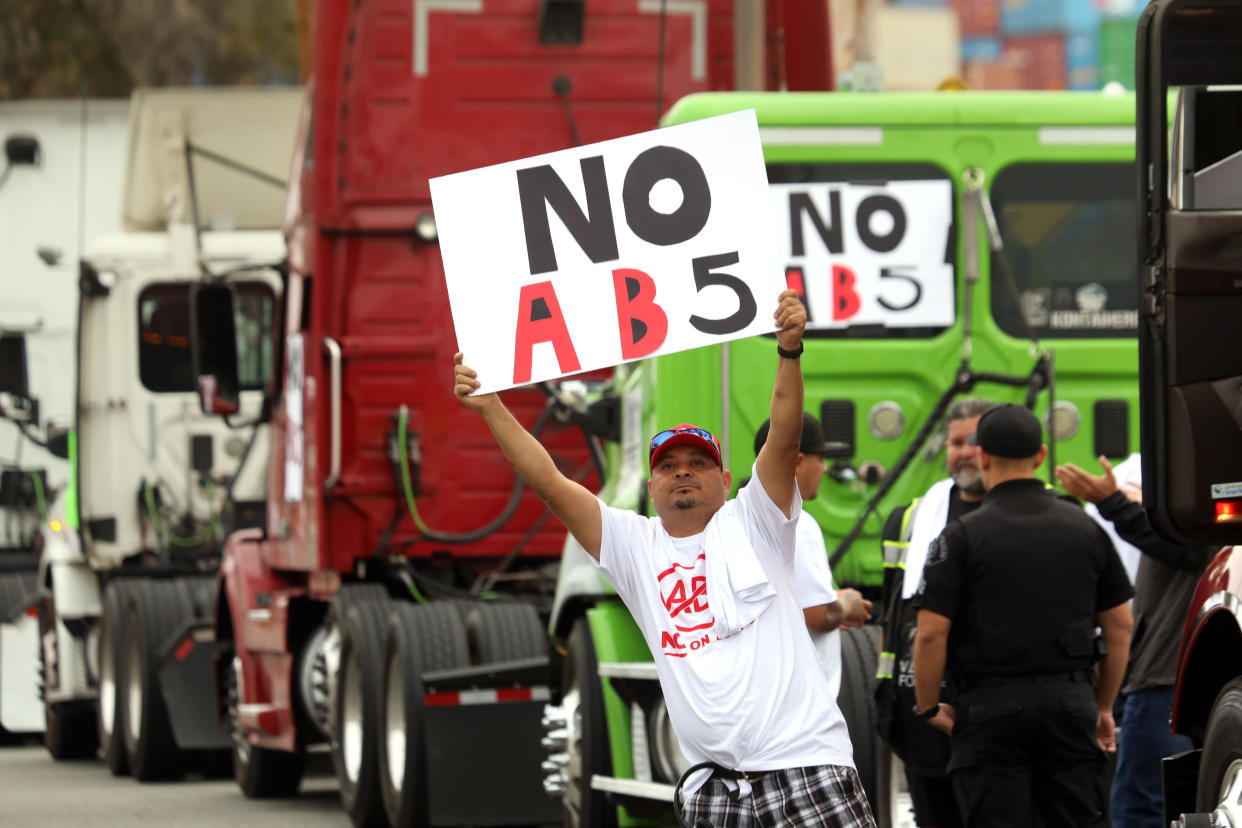 The California Trucking Association argued that it’s tough to meet those standards, and the law could take 70,000 independent truckers off the roads, which would further exacerbate the supply chain issue and backlog at the ports. Truck drivers have said they don’t want to be someone’s employee.

“They spend this amount of money on a truck — their life savings — and work hard to provide for their families,” Josue Mendez, owner of J&E Transportation, told KPIX 5. “An owner-operator becomes an owner-operator because they want to be their own boss.”

According to California’s Labor and Workforce Development Agency, under the ABC test, a worker is considered an employee rather than an independent contractor “unless the hiring entity satisfies all three of the following conditions: The worker is free from the control and direction of the hiring entity in connection with the performance of the worker, both under the contract for the performance of the work and in fact; the worker performs work that is outside the usual course of the hiring entity’s business; and the worker is customarily engaged in an independently established trade, occupation, or business of the same nature as that involved in the work performed.” 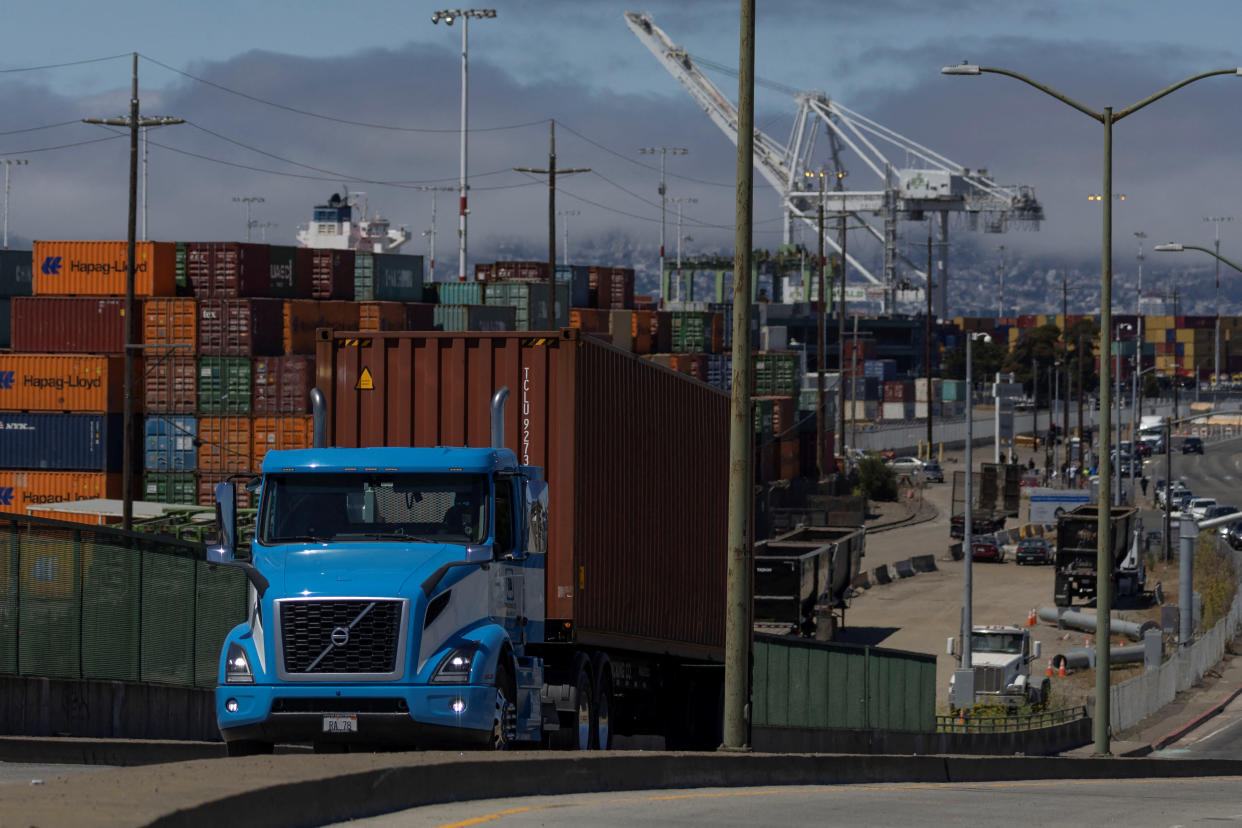 At the end of June, the U.S. Supreme Court denied review of the appeal of California Trucking Association’s last-ditch effort to keep the independent contractor law away from its operations.

The protests arose at a time when West Coast dockworkers and shipping operators are still locked in labor negotiations, further creating supply chain bottlenecks, in addition to rail labor negotiations going so poorly that President Biden had to step in.

“The transportation part of the supply chain is really taking some hits,” Patrick Penfield, professor at Syracuse University, told Yahoo Finance. “We could see what we saw last year and that’s the unfortunate thing, and I hate to state that, but it looks like it’s starting to move in that direction… these issues and problems are going to be impacting us for probably the third, fourth quarter.”

The protest began on July 18 when hundreds of independent big-rig truckers created picket lines in front of employee parking lots and blocked the movement of cargo in and out of terminals at the port.

On Wednesday, officials warned that the shutdown would “further exacerbate the congestion of containers” and expressed concern that disruption could cause businesses to go elsewhere.

“We understand the frustration expressed by the protestors at California ports,” Danny Wan, executive director at the Port of Oakland, said in a press release. “But, prolonged stoppage of port operations in California for any reason will damage all the businesses operating at the ports and cause California ports to further suffer market share losses to competing ports.” 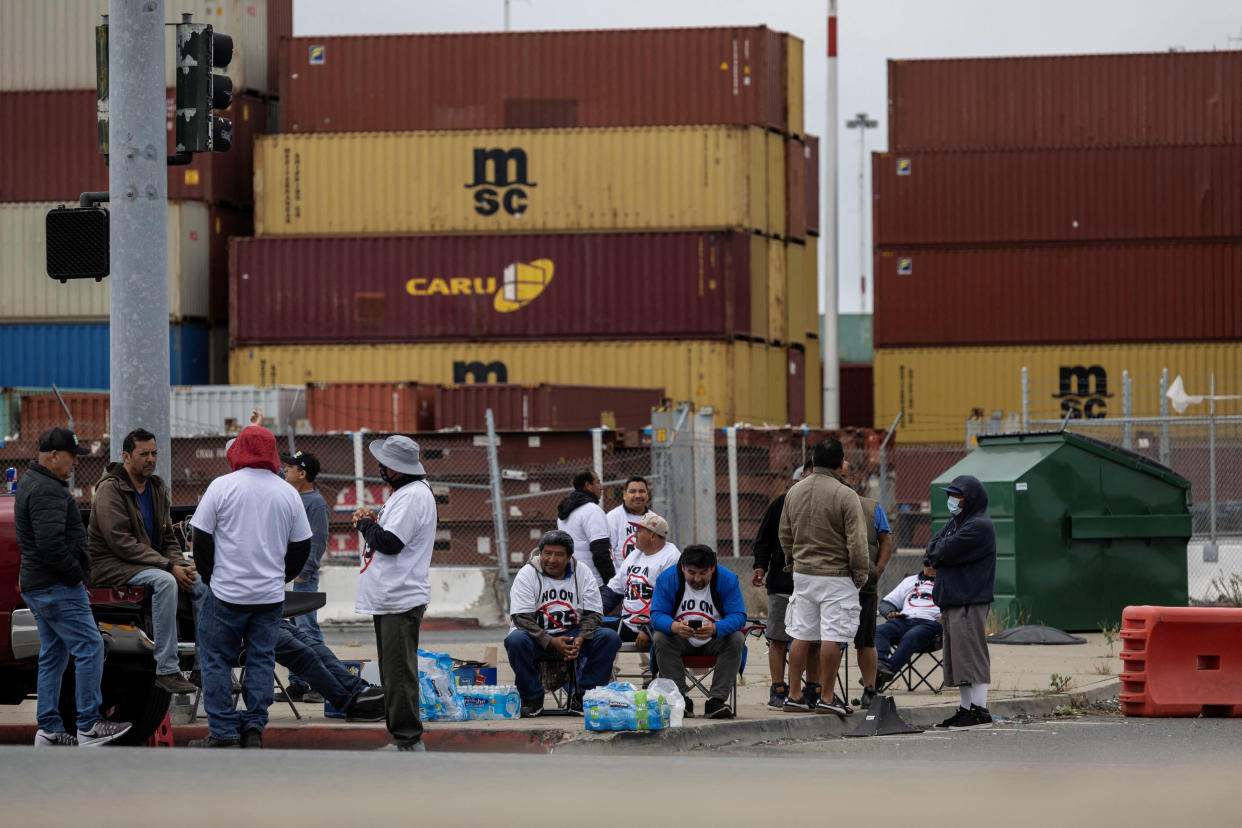 The port had already seen declining volumes. According to Port Authority of New York and New Jersey, shippers began sending more freight to ports on the East Coast, particularly the Ambrose Anchorage which serves the NYC metropolitan area. A spokesperson for Port Authority previously told Yahoo Finance that they are handling “33% more containers” than they were in pre-pandemic 2019 in the same period.

Flexport reported that it’s not just the NYC area seeing more activity — Norfolk, Virginia and Savannah, Georgia, are seeing it as well, along with the Gulf Coast.

Both Oakland International Container Terminal and Trapac announced full-day closures of their truck gates last week. The protests were also impacting the dock workers at the terminals.

The International Longshore and Warehouse Union said in a statement that 450 ILWU workers have been dispatched to the terminals in the past three days but were unable to work because of the trucker protests.

“ILWU workers want to work and move cargo, just like we have every day even during the worst days of the pandemic,” Farless Dailey III, ILWU Local 10 president, wrote in a statement. “We are in favor of AB5, not against it. But we’re not going to put our members in harm’s way to pass through the line of truckers.” 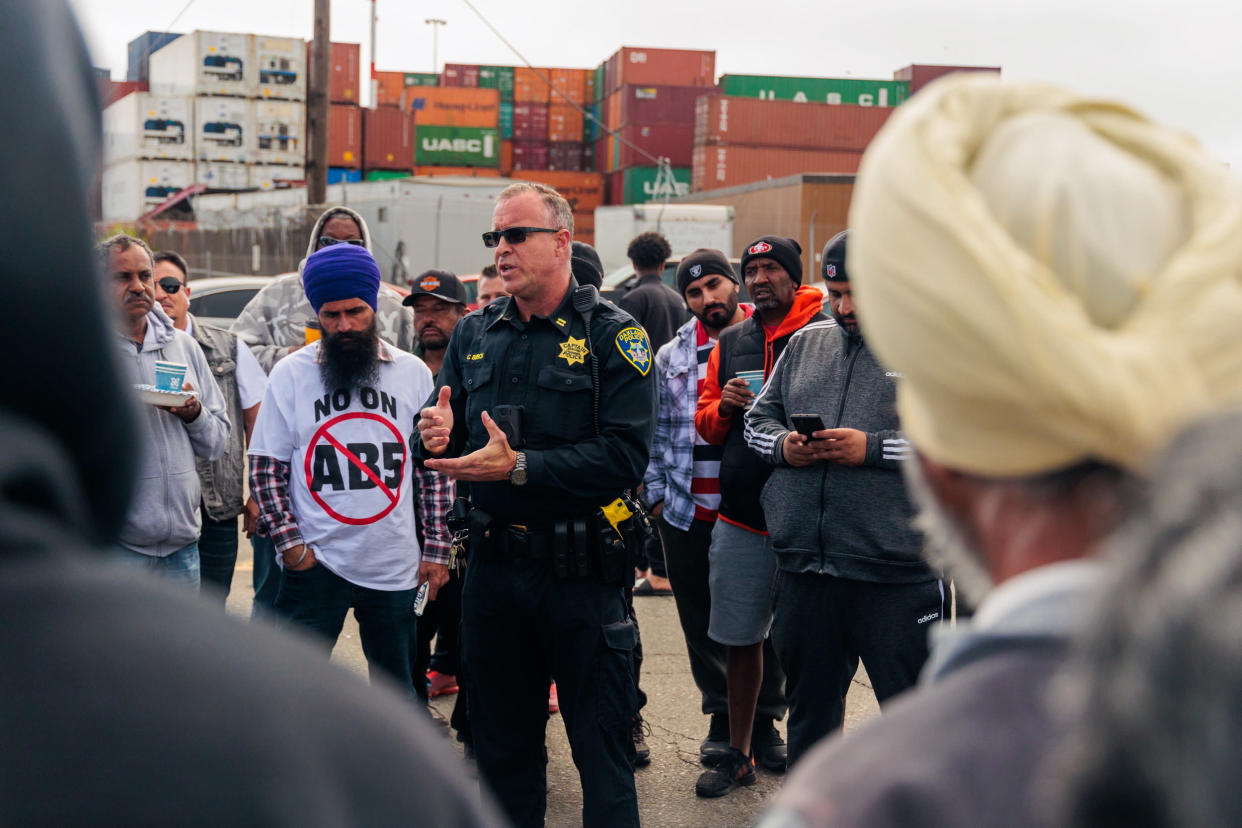 Truckers have been asking California Gov. Gavin Newsom to meet and discuss the issue. However, Newsom’s administration is not giving into the demands.

“Although it has been the subject of litigation, AB5 was enacted in 2019, so no one should be caught by surprise by the law’s requirements at this time,” a spokesman for the governor’s office told the Wall Street Journal.

Shane Gusman, a spokesman for CA Teamsters, which is not part of the protests, told Yahoo Finance that the current law allows trucker to be independent contractors.

“All it says is that you have to do it the right way,” Gusman said. “You can’t have this kind of sham deal, where I call you an independent contractor, but you don’t get to make your own prices. You work for one company, 100% for one company. The company tells you what to do when to work, when not to work. It’s not a real system.” 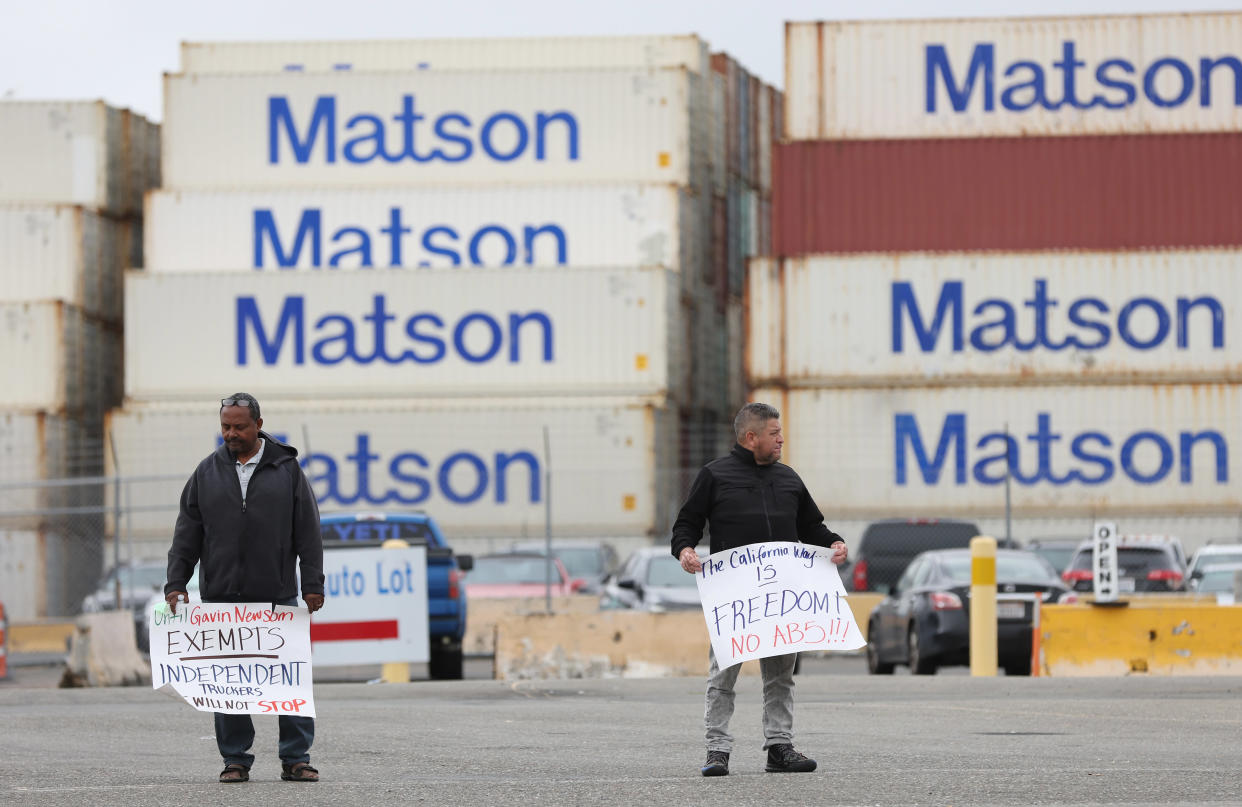 “Once it all settles,” he added, “I think most people will find that the law is protecting them rather than hurting them.”

For now, the protests continue in the “Free Speech Zone” areas.

“No vehicles may obstruct any entrances or exits to terminal operations or any other maritime business areas,” the letter stated. “Owner/operators must comply with all vehicular and local regulations. Any protester who does not comply with the law may be cited and penalized by the responsible law enforcement agencies.”