A historic country home with character features once mentioned by renowned architectural scholar Nikolaus Pevsner has been put on the market for £975,000.

Uphill is a Grade I listed five bedroom house in the heart of Lustleigh, a desirable Dartmoor village in Devon.

The house originally formed part of an old 14th century manor house before it was divided up in the 1950s.

It has retained many of its original period features including parquet flooring, striking wooden beams and Gothic windows. 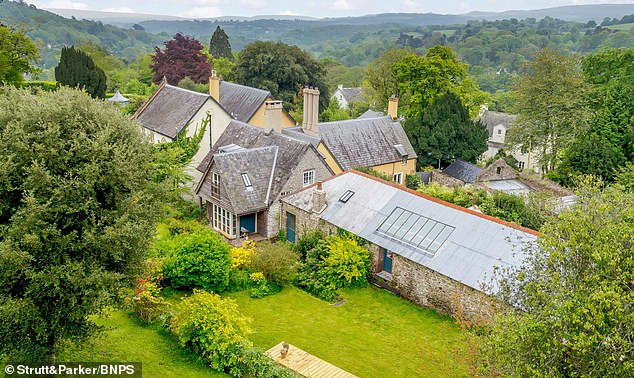 A historic country house in Lustleigh, Devon, has been placed on the market for £975,000 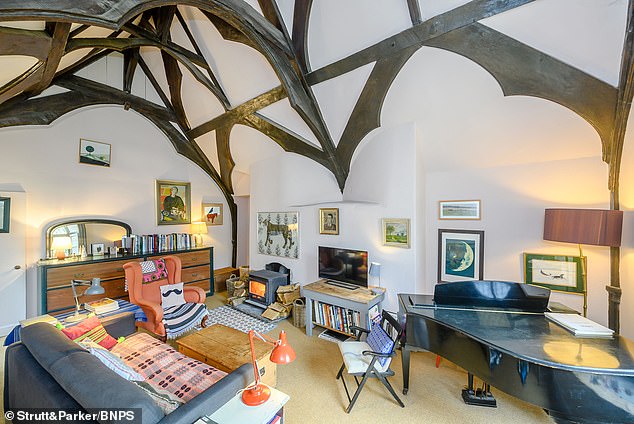 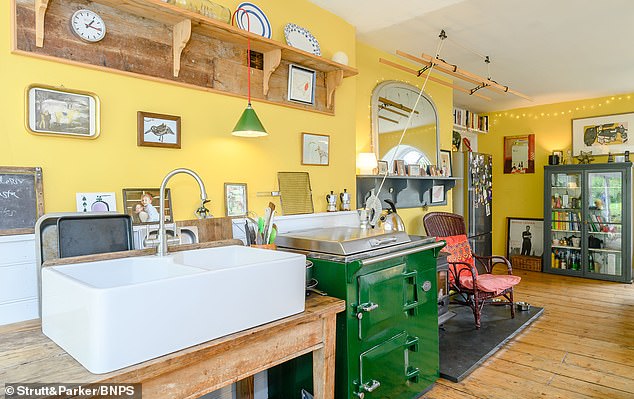 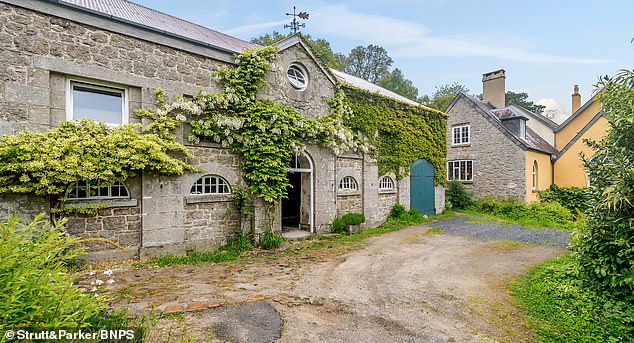 The five-bedroom property also comes with a two-bedroom cottage for the £975,000 price

Sir Nikolaus Pevsner was a German-born art historian who went on to teach at the Universities of London, Oxford, and Cambridge.

He became most famous for his writings on architecture.

Pevsner’s most high-profile work was his 46-volume series of county-by-county guides, entitled ‘The Buildings of England (1951–74)’.

Preserved examples of the 14th century beamed timber ceilings are so rarely found that Pevsner mentioned Uphill in his famous ‘The Buildings of England’ series.

It is the main reception room within the house and was designed as the family’s private living and sleeping quarters.

The main house has 2,761sqft of accommodation with another 2,189sqft in the Coach House that is also being sold with it.

In the main house there is a kitchen/breakfast room, dining room, two sitting rooms, a second utility kitchen, five bedrooms and three bathrooms.

The lower ground floor has attractive original flagstone flooring, a sitting room with beams, parquet flooring and a wood burner and the kitchen/utility room has a double Butler sink and an inglenook fireplace with a wood burner and bread oven.

The Grade II listed Coach House has recently been converted by the current owners to create a holiday cottage with excellent income potential. 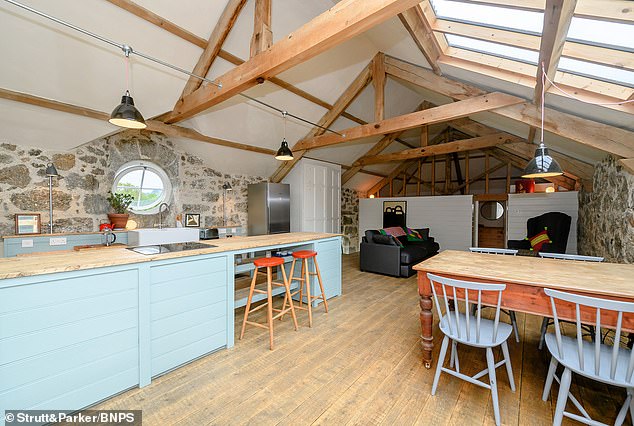 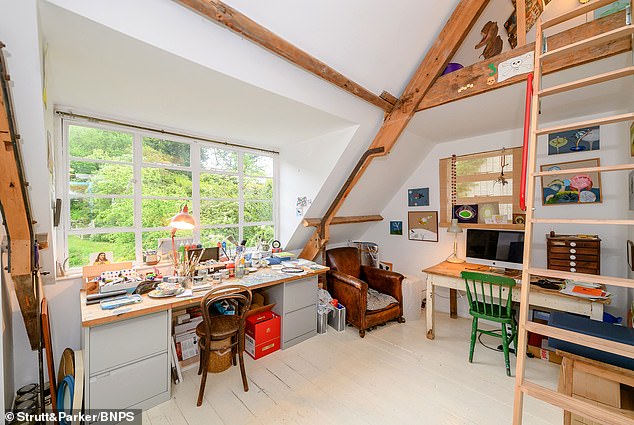 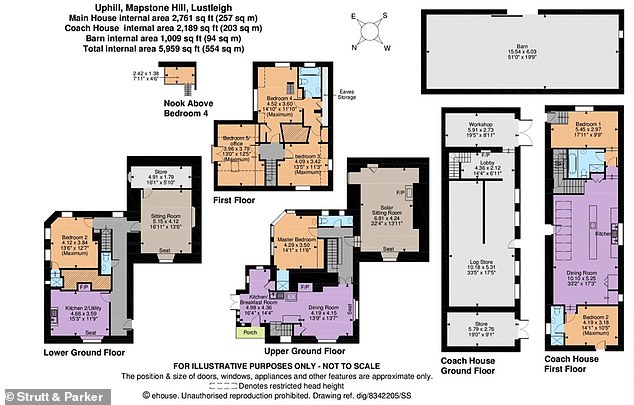 It has a log store and workshop on the ground floor with living accommodation above with an open plan kitchen/dining/sitting room, two bedrooms and two bathrooms.

Outside it has a large, south-facing walled garden with a number of terraced areas. There is apple, fig and cherry trees.

It also has a large Grade II listed Tithe barn opposite the Coach House which provides more storage space and has been used to provide additional parking for vehicles.

‘It’s a Grade I listed house which the owners have really looked after. They’ve been there 13 years and have restored it. 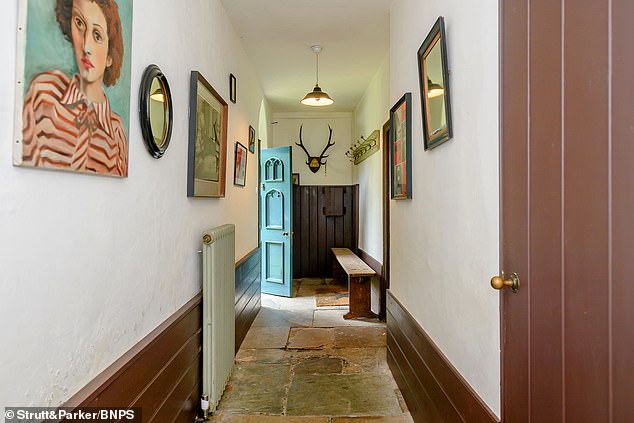 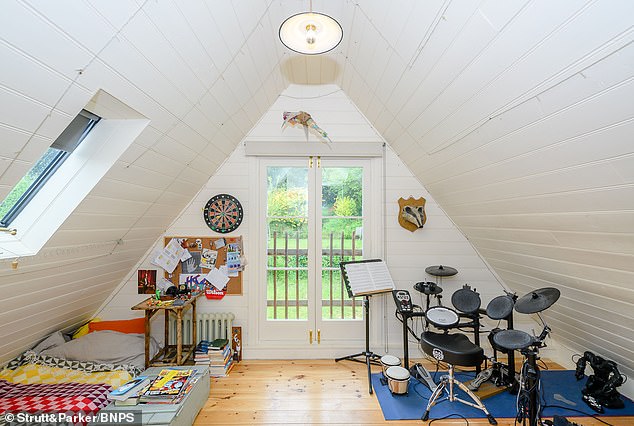 The £975,000 property has been described as a ‘fun’ family home in a desirable area in Devon 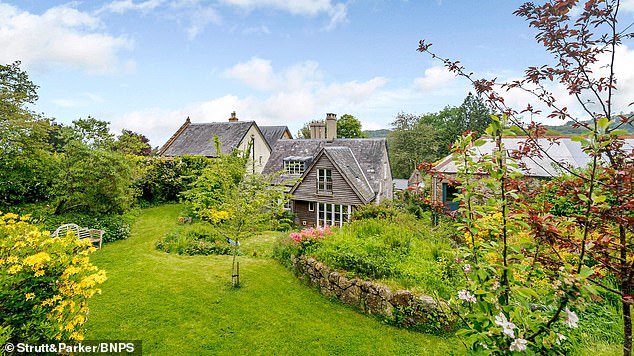 The properties come with an eye-catching garden area with apple, fig and cherry trees

‘He’s an architect and she’s an artist – they have just done it really well and it’s really nice to walk into.

‘With the holiday cottage as well, it’s got a lot to offer.

‘The location is really good. Lustleigh is one of the top villages on the moor, it has a really good community and you have the beauty of the moor on your doorstep.

‘The owners have done up the cottage to make an income, it’s using an older building and helping pay for the running costs and they’ve done well with it.’