Athens: A strong earthquake hit Friday near the Greek capital of Athens, causing residents to run into the streets in fear and firefighters to check for people trapped in elevators. 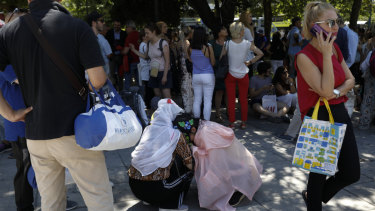 Tourist hug each other in Syntagma square after a strong earthquake hit near the Greek capital of Athens.Credit:AP

The quake sparked limited power cuts and communication problems around Athens, and the fire brigade reported receiving calls about people being trapped in elevators.

The shock was caught live in the studios of state broadcaster ERT.

The Civil Protection Authority said there was no immediate word on injuries or damages, but that police and volunteers north of the capital were carrying out searches for possible damage.

The most powerful quake to hit the Greek capital in the last 20 years came in 1999, when a temblor of magnitude 6.0 caused extensive damage and killed more than 140 people.

"It had a very shallow depth and that's why it was felt so strongly," he said.

"It is too early to say whether this was the main earthquake, but there have been aftershocks of magnitude 3.5, 2.5 and 3.2 and that is encouraging. But we need more time and data to have a clear picture."

Earthquakes are common in Greece and neighbouring Turkey.