Labour’s civil war on Brexit: As Keir Starmer vows party will NOT campaign to rejoin EU, his comrades say UK is better off in the single market

Labour was plunged into civil war over Brexit last night as senior figures rejected Keir Starmer’s vow that the party would not attempt to rejoin the EU.

In a much-hyped speech, Sir Keir claimed Labour had finally accepted the result of the 2016 referendum and would instead seek to ‘make Brexit work’.

Speaking at the Irish Embassy in London, he said he ‘couldn’t disagree more’ with those seeking to reverse Brexit, adding: ‘We cannot afford to look back over our shoulder.’

He pledged that Labour would not rejoin the EU or institutions like the single market or customs union. 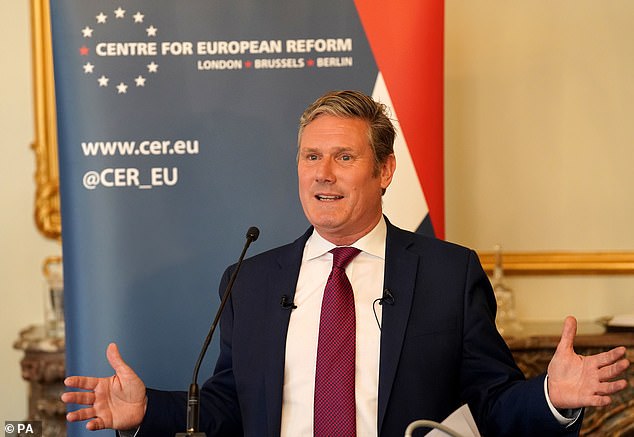 In a much-hyped speech, Sir Keir claimed Labour had finally accepted the result of the 2016 referendum and would instead seek to ‘make Brexit work’

But he did suggest that he would water down Brexit by agreeing to align with EU rules in key sectors like agriculture.

And senior figures made clear that a future Labour government would face immediate pressure from within to cosy up to Brussels.

London Mayor Sadiq Khan claimed the UK would be ‘more prosperous… being members of the single market.’

Mr Khan acknowledged that his comments were at odds with Sir Keir’s but said: ‘I believe that our city and our country’s future is best served being members of the single market.’

He added: ‘We can’t go back into the European Union, the British public have spoken, what we can do though is to make sure we have the least worst option. For me that is being members of the single market.’

Stella Creasy, chairman of the Labour Movement for Europe, said Sir Keir’s speech ‘opens the door to a different future with Europe’ – but said he must also keep open the option of restoring much closer ties with Brussels.

‘We are only just beginning to understand the damage Brexit is doing so we urge Keir to make sure nothing is off the table,’ she said.

‘Labour must show it understands our national interest lies in working with, not shouting at, our European counterparts.’

Asked directly whether Labour should keep open the idea of rejoining the single market and customs union and restarting free movement, she said: ‘Yes, it’s right to look at what can be done now but shortsighted to ignore options for the future too.’

Manuel Cortes, general secretary of the TSSA transport union, which is affiliated to Labour, described Brexit as ‘toxic’ and suggested it should be reversed.Mr Cortes said it was ‘disappointing that our Labour Party is not being bolder on what should be done to reverse the damage the Tories’ Brexit deal is inflicting on all of us’. In a hung Parliament, Sir Keir could also come under pressure to back single market membership as the price of a coalition with the Liberal Democrats.

The Labour leader spent years working with Remainers to block the referendum result.

Just days before Britain finally left the EU in January 2020 he said: ‘The argument for a customs union and single market alignment is as powerful now as it was before the election.’ But Labour strategists fear the party’s pro-Brussels stance will wreck its hopes of regaining seats in the Midlands and North. 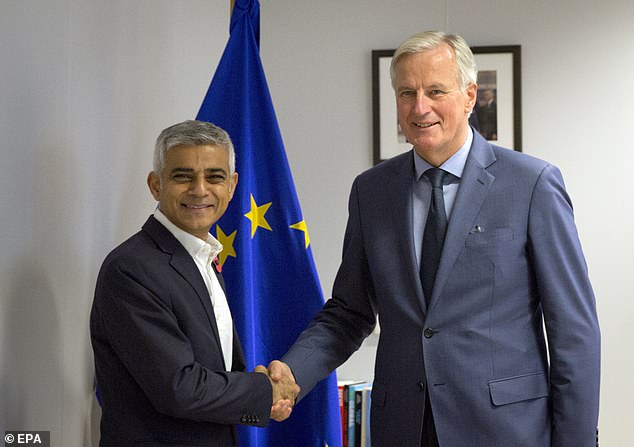 Sir Keir last night said he now believed there was ‘no case’ for rejoining. ‘I want to make Brexit work,’ he said. ‘We want to go forwards, not backwards. This is not about rejoining. It is not about going back into the single market or customs union. We have left the EU, there is no case for returning.’

He added: ‘It is quite clear that if a Starmer-led Labour Party got into government we would end up with some sort of alignment with Brussels which would be even worse than being in the EU.

‘We would be a rule taker, with no influence over the rules we would have to follow. All the benefits in terms of new trade deals and the opportunity to do things differently would be jettisoned.’ Lord Frost, who negotiated the Brexit deal, said that while lower trade barriers were desirable, Sir Keir had failed to spell out ‘what he is going to give up’ to achieve them. He added: ‘Why would the EU make concessions to a party that instinctively adopts EU positions anyway, as it has on the Northern Ireland Protocol?’

Sir Keir set out a five-point plan to ‘make Brexit work’, including measures to ‘sort out’ the Northern Ireland Protocol and ‘tear down unnecessary trade barriers’.

The Labour leader said he would seek alignment on areas like agricultural goods in order to cut red tape at the border. But the stance risks undermining the UK’s ability to innovate by embracing new technology like gene-editing, which is currently banned by the EU.

Labour said Sir Keir would also seek wider alignment with Brussels across ‘specified sectors’ which could include manufactured goods. Sir Keir gave little detail on how Labour would fix the problems in Northern Ireland, but said he would enjoy greater ‘trust’ from Brussels than the PM.

A Whitehall source claimed Sir Keir would roll over to Brussels, adding: ‘The fact he’s giving the speech at the Irish Embassy shows where his loyalties lie.’

Labour’s plan would also see Britain’s industries supported by ‘mutual recognition of professional qualifications’ and restored access to funding and research programmes, new security arrangements to defend the nation’s borders, and the delivery of ‘good, clean jobs of the future to our shores’.