Airports and hospitality venues across Europe are struggling to meet the surge in demand for travel after pandemic restrictions eased.

2022 marks the first summer when many Europeans are able to travel after two years of Covid-19 restrictions, prompting a surge of tourists across the continent.

But thousands of hospitality workers placed on furlough schemes also never returned to their jobs after the pandemic restrictions were lifted.

Many airports that reduced staff over the past two years are also finding themselves unable to attract new workers in time to meet the summer rush.

Photos ranging from mid May to June showed holidaymakers queueing round the block in airports in Madrid, Amsterdam, Sweden and Dublin. 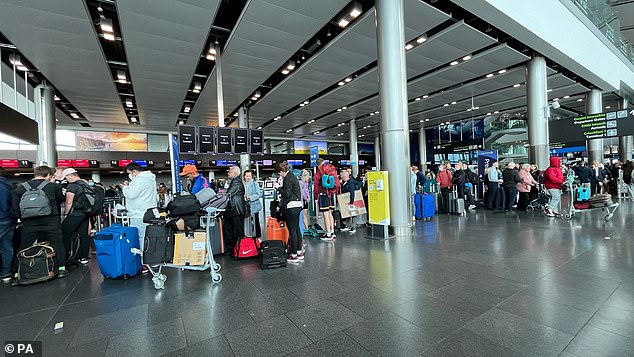 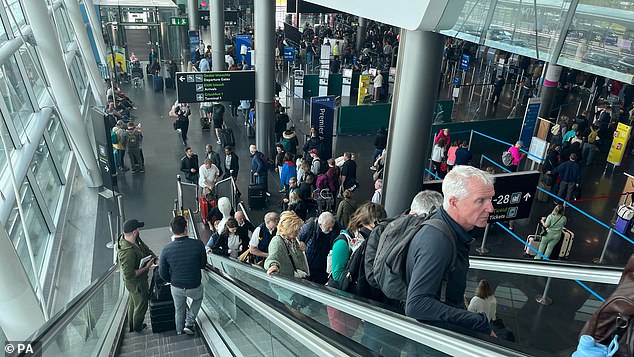 Taoiseach Micheal Martin said the situation was ‘unacceptable and not good enough’. Concern has been growing about what could unfold at the airport ahead of the bank holiday weekend 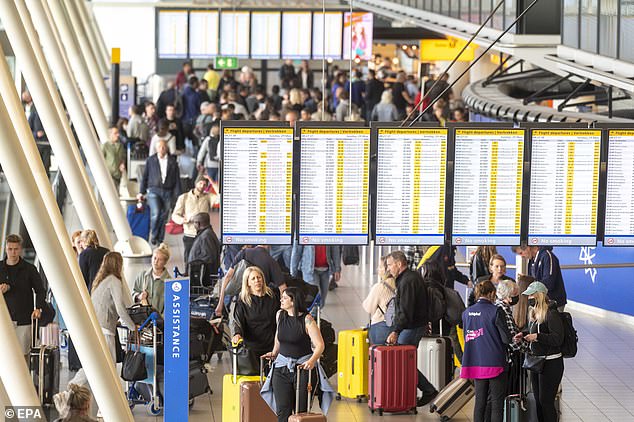 Travellers at Schiphol airport are pictured, at the end of a long weekend, Schiphol, Netherlands, 29 May 2022 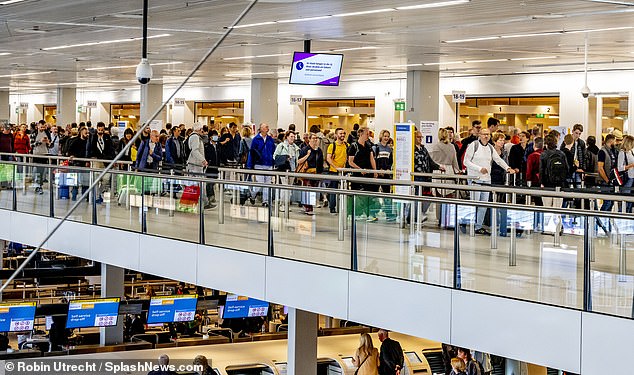 Travelers are waiting in long lines to fly from Schiphol. The airport now warns unequivocally that there could be hours of queues in the coming weeks

More than 1,000 passengers missed their flights at Dublin airport on Sunday after staff shortages led to hours of queuing.

Dublin airport cut too many staff during the Covid-19 pandemic, its chief executive said on Wednesday.

‘We felt going into 2022 with 70% of our (pre-Covid) staff we’d be OK and we were wrong…,’ Philips told a parliamentary committee. ‘We were wildly wrong in terms of the recovery levels.’

No industry analyst believed traffic would come back to pre-pandemic levels until 2024 or 2025, he said, but in Dublin it has returned to 90% – with some now predicting travel could exceed levels seen before the pandemic.

The DAA made 25% of its staff redundant at the height of the pandemic.

Ireland’s Covid-19 Temporary Wage Subsidy Scheme provided a weekly £350 per worker subsidy for firms who experienced a 25% fall in turnover. 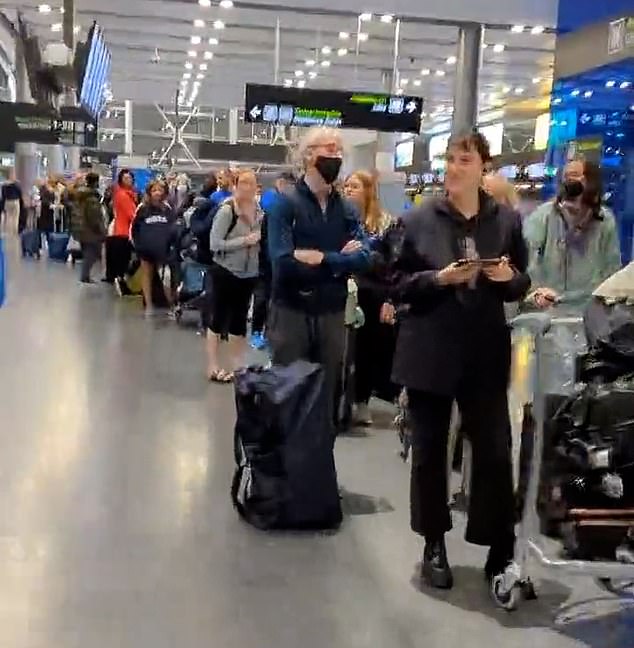 Dublin airport cut too many staff during the Covid-19 pandemic, its chief executive said on Wednesday 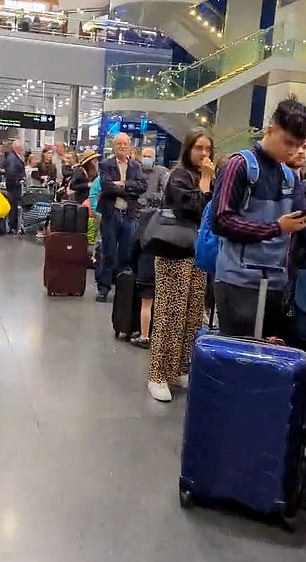 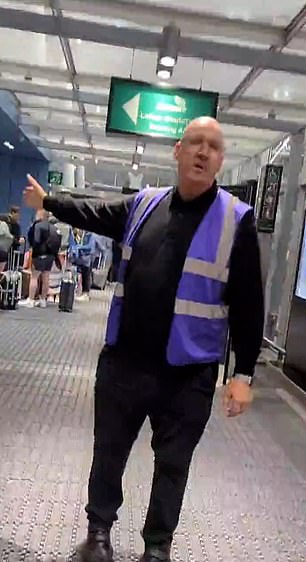 ‘We felt going into 2022 with 70% of our (pre-Covid) staff we’d be OK and we were wrong…,’ Philips told a parliamentary committee. ‘We were wildly wrong in terms of the recovery levels.’ No industry analyst believed traffic would come back to pre-pandemic levels until 2024 or 2025, he said, but in Dublin it has returned to 90%

But the Institute for Government think tank said countries like Ireland that centred their wage support on general subsidies rather than focusing on paying employees only for the hours they did not work saw bigger increases in unemployment rates.

In the case of Ireland, ‘special pandemic-related unemployment benefit were so generous that initially workers could receive more in benefits than if they stayed in work, which perversely incentivised employers to lay-off workers,’ said the Institute.

The Paris airport authority also warned of serious disruption in the Charles-de-Gaulle airport. Travellers complained of long queues at the beginning of May.

The airport authorities last year said they are abandoning plans to build a huge new terminal that would have allowed the airport to handle up to 40 million extra passengers a year because of the coronavirus pandemic.

On Tuesday, the Swedish parliament summoned the CEO airline operator Swedavia to explain long queues in Arlanda airport in Stockholm.

On the same day, tourists arriving at Spain’s Palma de Majorca airport were waiting nearly three hours after landing to reach the coaches to get to their hotels, reported The Irish Mirror.

Spanish air control staff are currently deciding whether to go on strike, which could further wreck travel plans.

Germany saw hundreds of flights cancelled after its airport workers went on strike in March.

A number of women also told ITV News they were stranded in Bulgaria after their flight home to Birmingham was cancelled. 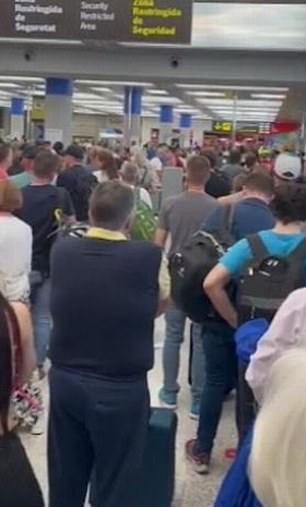 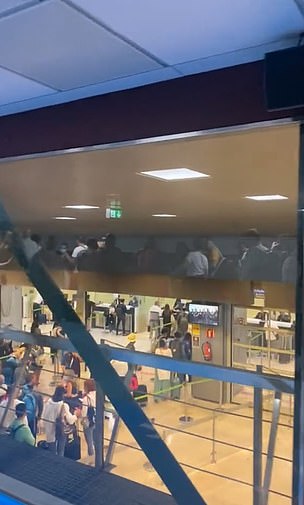 Tourists arriving at Spanish airports reported waiting nearly three hours after landing to reach the coaches to get to their hotels. Long queues were captured on video in Madrid

Brits arriving for holidays across Europe are set to find several venues closed after hospitality bosses complained they were unable to get the staff needed to cater for the influx of tourists.

With an estimated 250,000 vacancies in restaurants and cafes, French businesses owners blamed president Macron’s Covid furlough scheme, which allowed staff to stay at home on full pay during the pandemic.

When the pandemic began, French workers could claim up to 70% of pre-crisis pay up to a cap. Workers could be on scheme for 12 months rather than usual six.

During the crisis, the state reimbursed any salary employers paid to their staff for hours not worked, up to a cap of 4.5 times the hourly minimum wage.

Macron himself described it as the most generous scheme in Europe. But many never went back to the industry.

France’s unemployment rate hit 7.3 per cent, the lowest since 2008, with work available in other sectors.

Macron has said he is proud of his government’s emergency economic measures to support jobs during the pandemic, and highlighted a cut of unemployment from 9.6 per cent to 7.4 per cent.

But the success in lowering unemployment has meant a flux of younger workers who traditionally support the hospitality sector looking for opportunities elsewhere.

Analysts say the same has happened with airport workers, with former staff looking for employment in other roles after the sector was plunged into uncertainty by Covid-19.