Sir Ed Davey today admitted the Liberal Democrats have ‘lost touch’ with voters as he was elected the party’s new leader.

Sir Ed, who served as a Cabinet minister in the Coalition Government, said the party needed to ‘wake up and smell the coffee’ after suffering three crushing general elections in a row.

The MP for Kingston and Surbiton had been the party’s acting leader since Jo Swinson lost her seat at the 2019 general election.

Today it was announced that he had defeated his only challenger, Layla Moran, by 42,756 votes to 24,564 to secure the leadership on a permanent basis.

However, in a sign that the contest had failed to grip even the Lib Dem membership, turnout was just 57.6 per cent.

Sir Ed wasted no time in spelling out the challenge facing the party as it battles for political relevancy. 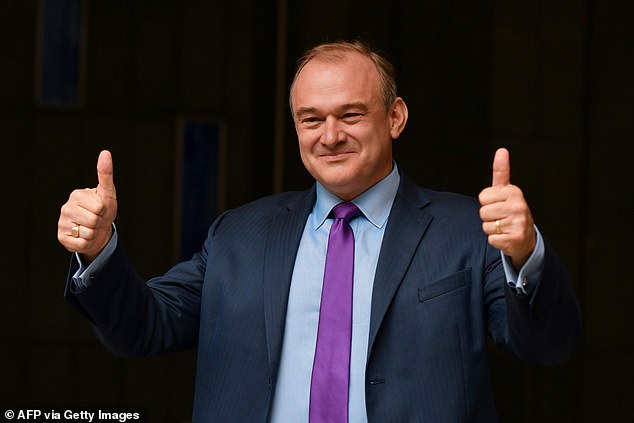 Sir Ed Davey was today elected as the new leader of the Liberal Democrats. He had served as acting leader since Jo Swinson lost her seat at the 2019 general election

Sir Ed Davey has been a prominent figure in the Liberal Democrats for decades and now faces a battle to revive the party’s fortunes.

At the height of the Lib Dems’ influence under Nick Clegg, Sir Ed sat at the Cabinet table as energy and climate change secretary during the coalition with the Tories.

But the decision to join forces with David Cameron proved disastrous for the party, with Sir Ed among dozens of Lib Dem casualties in the 2015 election, losing his Kingston and Surbiton seat to his Conservative rival.

He won the seat back in 2017 but did not stand for the leadership after Tim Farron quit, explaining that he wanted to spend time with his family – wife Emily, their severely disabled son John and daughter Ellie.

In the 2019 leadership contest, prompted by the resignation of Sir Vince Cable, 54-year-old Sir Ed was defeated by Jo Swinson, who subsequently lost her own seat in December’s general election.

It has been a long road to the leadership for Sir Ed, who was first elected in 1997 and was chief of staff to former leader Sir Menzies Campbell.

In 1994, before entering Parliament, Sir Ed won a bravery award for rescuing a woman who had fallen on to the tracks at Clapham Junction station in south London.

His early life was marked by tragedy, with his father dying when he was four and his mother when he was 15.

Sir Ed attended the private Nottingham High School – former Labour minister Ed Balls was in the year below – and then studied politics, philosophy and economics (PPE) at Oxford.

The scale of the task now facing the new leader is clear – the Lib Dems won 62 seats in 2005 and 57 in 2010 but have since struggled in general elections.

But with Labour moving towards the centre following Sir Keir Starmer’s leadership victory, the space for the Lib Dems in British politics may be further squeezed.

The Lib Dems won 57 seats at the 2010 general election, entering government with the Tories, before slumping to just eight in 2015 and then recovering to 12 in 2017.

The party had hoped that a bold strategy of fighting to reverse Brexit at last year’s snap general election would resonate with Remainers and potentially even power the Lib Dems to an unlikely overall victory.

But ultimately the Lib Dems went backwards, finishing with 11 MPs as Ms Swinson was humiliatingly kicked out of Parliament after leading her party’s campaign.

Sir Ed said today that it was time for the party to ‘face up to uncomfortable truths’.

‘And none of it is going to be quick or simple to achieve.’

At an event in London to announce the leadership result, Sir Ed said: ‘We have to wake up and smell the coffee. Nationally our party has lost touch with too many voters.

‘Yes, we are powerful advocates locally. Our campaigners listen to local people, work hard for communities and deliver results.

‘But at the national level, we have to face the facts of three disappointing general election results.

‘The truth is: voters don’t believe the Liberal Democrats want to help ordinary people get on in life.

There has been a revolving door at the party leader’s office ever since Nick Clegg quit in 2015.

His replacement Tim Farron lasted until 2017, Sir Vince Cable took over but was gone by July 2019 and while Ms Swinson only lasted until December 2019.

The party was largely defined in recent years by its opposition to Brexit and its differences to Jeremy Corbyn’s Labour Party.

But with the UK now having left the EU and with Labour a much different force under the new leadership of Sir Keir Starmer, Sir Ed will need to redefine his party.

‘Voters have been sending us a message but we have not been listening. It is time for us to start listening,’ he said.

‘As leader I am telling you: I have got that message. I am listening now.’

Ms Moran, who lost by more than 18,000 votes, congratulated the new leader and said: ‘I look forward to working with him to campaign for a better future for Britain.’