Liberal Democrat leader Sir Ed Davey has compared Rishi Sunak and Jeremy Hunt to bank robbers ‘asking us for a loan to buy their getaway car’ ahead of this month’s budget.

The Prime Minister and Chancellor are continuing to put together their plans for the Autumn Statement on 17 November, as they look to plug an estimated £50billion blackhole in the public finances.

Britons have been told to brace themselves for public spending cuts and even tax rises as Mr Sunak and Mr Hunt eye a fiscal tightening following recent financial turmoil.

In a series of swipes at the Tories as he delivered a keynote speech today, Sir Ed lashed out at the ‘chaos’ that ‘Conservative clowns’ had inflicted on the country as he claimed they had ‘almost bankrupted Britain’.

He also called for a new £3billion ‘mortgage protection fund’ – paid for by reversing cuts to taxes on banks dating back to 2016 – to assist families now facing crippling increases in their loan repayments.

Under the Lib Dem proposal, homeowners who see their repayments increase by more than 10 per cent of their income would be able apply for grants of up to £300 a month to help cover the costs. 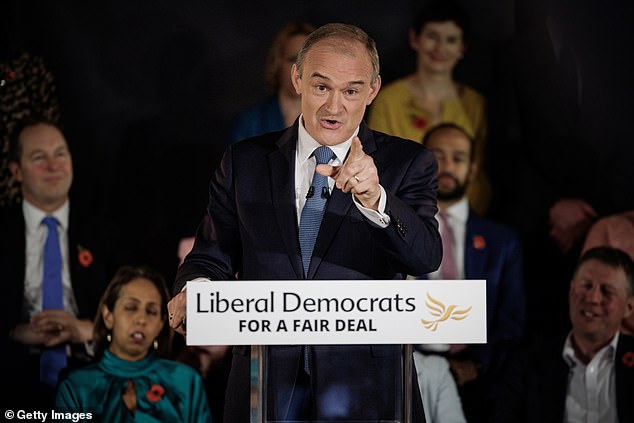 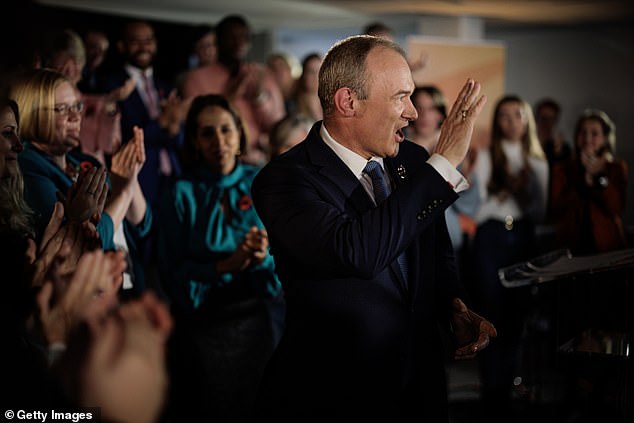 In a series of swipes at the Tories as he delivered a keynote speech today, Sir Ed lashed out at the ‘chaos’ that ‘Conservative clowns’ had inflicted on the country 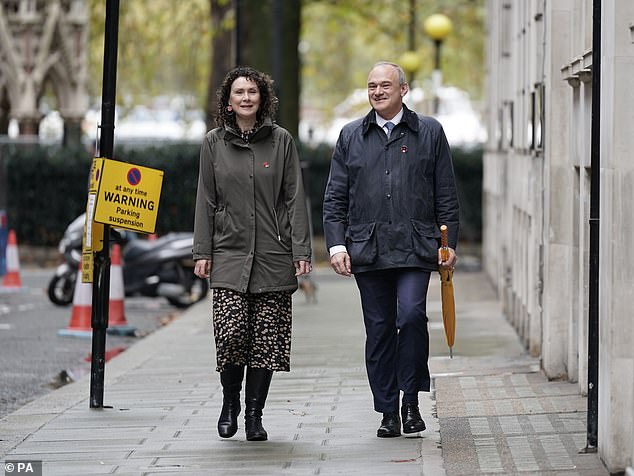 Sir Ed’s speech came after he had been forced to cancel his party’s conference in Brighton in September following the death of the Queen.

Noting how his speech had subsequently been postponed for 47 days, Sir Ed told a London audience this afternoon the delay was the equivalent to ‘approximately one Liz Truss’ – in a jibe at the former premier’s historically short spell in No10.

Sir Ed claimed the Tories were seeing to ‘blame their chaos on everyone else’ following Ms Truss’s disastrous time in office and the meltdown on financial markets.

‘The BBC, the civil service, the ‘wokerati’ – whoever they are,’ he said.

‘They’ve blamed the Bank of England, British businesses, and even British workers.

‘But it won’t wash. We all know who’s responsible. The blame for this chaos lies squarely with the Conservative Party.’

Sir Ed highlighted a ‘mortgage crisis’ across Britain as interest rates continue to soar and families’ monthly payments rising by hundreds of pounds.

He added the Tories could ‘never again can they claim to be the party that balances the books’.

And, ahead of the Autumn Statement on 17 November, Sir Ed said: ‘The Conservatives are the party of chaos. And now what worries millions of people is what happens next.

‘After inflicting so much chaos, the Conservatives want the rest of us to pay to clear up their mess.

‘They are already talking about more unfair tax rises. More cuts to pensions and benefits. More cuts to schools. The police. Even our NHS. All to fill the hole they themselves created.

‘It’s like they’ve robbed our bank, and now they’re asking us for a loan to buy their getaway car!

‘Well, we say “No”. Rishi Sunak and Jeremy Hunt – Instead of inflicting even more pain on struggling families and pensioners, it’s time to start helping.’

Sir Ed demanded a ‘proper windfall tax’ on the profits of fossil fuel giants, as well as higher taxes on banks.

‘Use those extra billions to give people real help with energy bills. To protect pensions and benefits from inflation,’ he added.

‘To safeguard schools, hospitals and councils from cuts. And to help homeowners struggling to pay that Conservative property penalty.’