Melburnians will be able to travel from the new Anzac station, near the Shrine of Remembrance on St Kilda Road, to the airport in a little over 30 minutes, the Andrews government has pledged.

A giant shed has been removed from above the station, which will form part of the Melbourne Metro Tunnel project. About six months of work will now begin to complete the station, images of which have been provided to The Age. 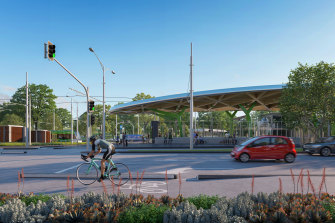 An image of the new Anzac station as seen from St Kilda Road.

People trying to get from St Kilda Road to the airport currently need to catch two trams and a bus. But new government estimates indicate a trip from Anzac station to the airport, via the new Metro Rail Loop, will take about 30 minutes.

Trains in the new Metro Tunnel will be using the station by 2025 and heading to the airport before the end of the decade.

The number of lanes on St Kilda Road will be reduced from three to two in both directions, while the final design proposes 221 fewer car parking spaces in the surrounding Domain precinct.

The government hopes the creation of a station will reduce the number of people driving to nearby landmarks such as the Royal Botanic Gardens and the Shrine.

The government has decided to introduce bike lanes cordoned off by concrete separators, with a lane of parking spaces on the other side. Cyclists will be able to ride two abreast on the 2.5-metre-wide lane.

These “Copenhagen-style” bike lanes have previously been criticised by VicRoads, which regards them as less safe than alternatives.

Transport Infrastructure Minister Jacinta Allan said the new station would be a “world-class transport hub, boosting the St Kilda Road precinct and making it easier to get to beloved Melbourne landmarks”.

“After two years of excavation it’s wonderful to see the station’s major structures taking shape and get a glimpse of this future landmark for our great city,” she said in a statement. 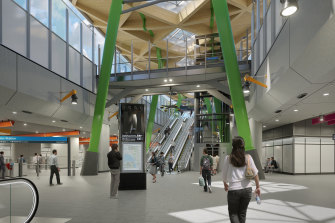 An artist’s impression of the new station.

MP for Albert Park Martin Foley said the station would give residents “more choice and faster journeys to get where they need to go”.

The Andrews government and the project’s builders – the Cross Yarra Partnership – agreed to split the cost of a $2.7 billion blowout on the Metro Tunnel project, pushing the $11 billion price tag to $13.7 billion.

The tunnel will link North Melbourne and the University of Melbourne precinct north of the city with the Anzac precinct near Toorak Road in South Yarra, via stations at the State Library and Town Hall in the CBD.

The project connects the inner north to the inner south, and there has been speculation the government will announce a Metro 2 project, connecting the inner west to the inner east, before the November election. However, cost overruns and pandemic-related spending have constrained the government’s ability to spend on big transport projects.

At the end of the year, St Kilda Road’s tram tracks and lanes will be realigned for the final time over the station, after twice being realigned already as part of the construction plan.