THIS is the shocking moment a vile thug hurled a 79-year-old pensioner to the floor and broke her arm as he mugged her in broad daylight.

Cops are hunting the callous yob who pounced on the unsuspecting OAP and robbed her handbag as she walked along a street in Kettering, Northamptonshire.

Police released CCTV showing the mugger, who is wearing a grey hat, run towards the elderly woman between 3.20pm and 3.50pm on September 8.

He is seen eyeing up her handbag before jogging across the road on St Theresa’s Close and attacking her.

As he grabs the bag and tries to flee the woman holds on and he yanks her to the pavement.

He then drags her along the ground before wrenching the bag from her grasp and escaping.

The pensioner is seen pulling herself to her knees as she watches the thief hotfoot it away.

Police have arrested two 31-year-old men in connection with the offence, who have been released on bail pending further enquiries.

Detectives are appealing for anyone with information to come forward.

DC Bates, who is leading the investigation, said: “Many people will be shocked by the CCTV footage we have released today and rightly so.

“This lady, like everyone else, should be able to go about her business and feel safe.

"Her attacker has taken that feeling of safety away from her and it is imperative that he is identified and brought to justice.

“If anyone recognises the man in the CCTV footage, please call us on 101, or please contact Crimestoppers on 0800 555111 if you wish to report your information anonymously.” 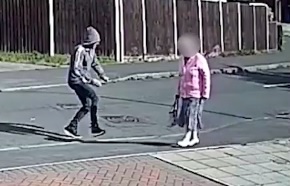