THE NHS has apologised after a shocked paramedic revealed 22 ambulances were stuck outside a hospital for six hours.

The student paramedic shared footage of the ambulances backed up outsideTorbay Hospital in Devon – and claimed the queue didn't move for six hours. 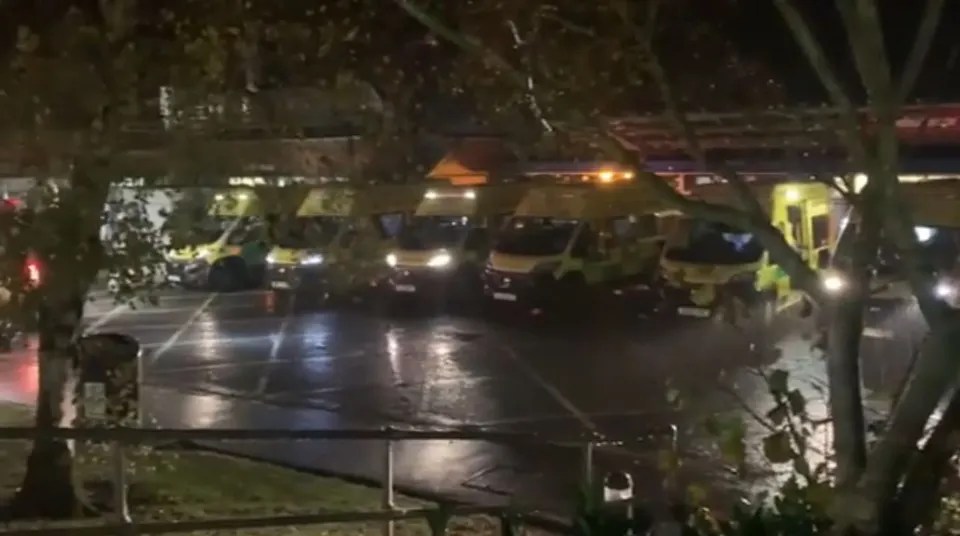 According to Devon Live, the fed-up medic said: "Currently at the back of a 22 ambulance queue. No movement in 6 hours. Staff are broken, the hospital is full. This is not sustainable.

"Patients are being affected and so are staff. The NHS in south Devon just broke. There was time to fix this, I don’t think so anymore."

A member of the public said he had counted up to 26 ambulances in the queue.

In a statement, the hospital said its emergency department has been under "sustained pressure" for several months now and apologised to anyone waiting for treatment.

The hospital staff are facing huge pressures with reports of people waiting for up to 13 hours in A&E.

Staff are also reeling after being told their Christmas parties have been cancelled by bosses due to concerns over the new Omicron variant, according to Devon Live.

Ian Currie, medical director at Torbay and South Devon NHS Foundation Trust, said: “Like many hospitals across the country, we have been under sustained pressure in our emergency department for several months now.

“Currently extreme pressure is impacting on our ability to admit patients in a timely way which means that ambulances are currently waiting to discharge patients and we are not able to see people as quickly as we would like.

"We would like to offer our sincere apologies to everyone who is waiting for treatment.

He added: "We always aim to see and treat patients as quickly as possible. All patients arriving at our emergency departments are triaged and assessed with the most clinically urgent being prioritised.

"This does mean that anyone presenting with less urgent needs is likely to face a very long wait for treatment."

It comes after Royal Cornwall Hospital declared a critical incident in October after 25 ambulances were left queuing outside amid "unprecedented" demand.

The county's main hospital was breaking point as 100 patients flooded the emergency department – that only has the capacity for 40.

Staff had been forced to work "extraordinarily hard" to try and cope with the demand that the Trust says has been exacerbated by the number of patients attending the hospital, who should be receiving care elsewhere.

The hospital escalated its operating level to an "internal critical incident" amid the influx of patients and the queue of ambulances waiting to offload.

Ambulance crews shared images of the huge number of emergency vehicles mounting up outside of the A&E department at the hospital.

South Western Ambulance Service said 30 per cent of their ambulances had been left waiting outside of various hospitals waiting to offload poorly patients.

In September, three hospitals in the county were forced to suspend all urgent and planned surgeries after a colossal surge in Covid patients.

They made the "difficult decision" after mounting pressure on NHS services, while the 999 operators were answering calls every 25 seconds.

And one NHS trust were forced to call in the military due to staff shortages as they buckled under the pressure from the pandemic.