Tears for Japan’s assassinated leader: Shinzo Abe’s emotional wife travels with her husband’s body as it is taken to temple for ‘tsuya’ ceremony for sending off the dead

Eyes shut tight with emotion, her staff bowing their heads in respect: This is how slain Japanese leader Shinzo Abe’s wife left their Tokyo home for his wake today.

Akie Abe, 60, was photographed with what seemed to be tears in her eyes as she sat in the front seat of the hearse carrying her husband’s body early Monday.

Akie, who was married to Abe for 35 years, accompanied the coffin to Tokyo’s Zojoji temple where a ‘tsuya’ ceremony will be held before a private funeral tomorrow.

Abe, 67 and Japan’s longest-serving prime minister, was shot dead Friday last week by a gunman who targeted him over alleged associations with South Korea’s Unification Church – known as the Moonies. 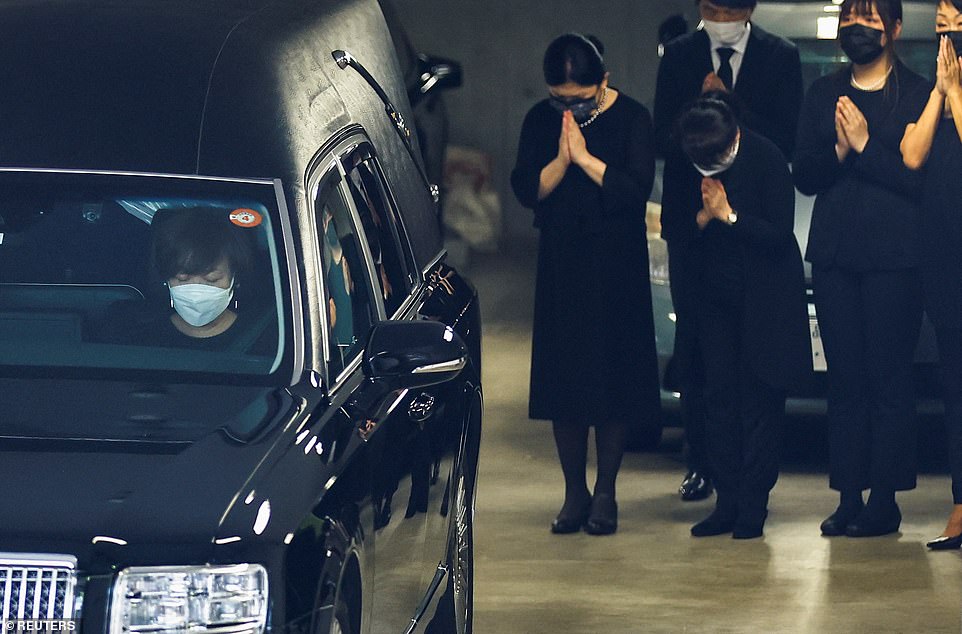 Akie Abe, 60, the widow of Japan’s slain ex-prime minister Shinzo Abe (left), looked emotional as she left the family home in Tokyo today riding in the hearse carrying her husband’s body – as their staff bowed in respect 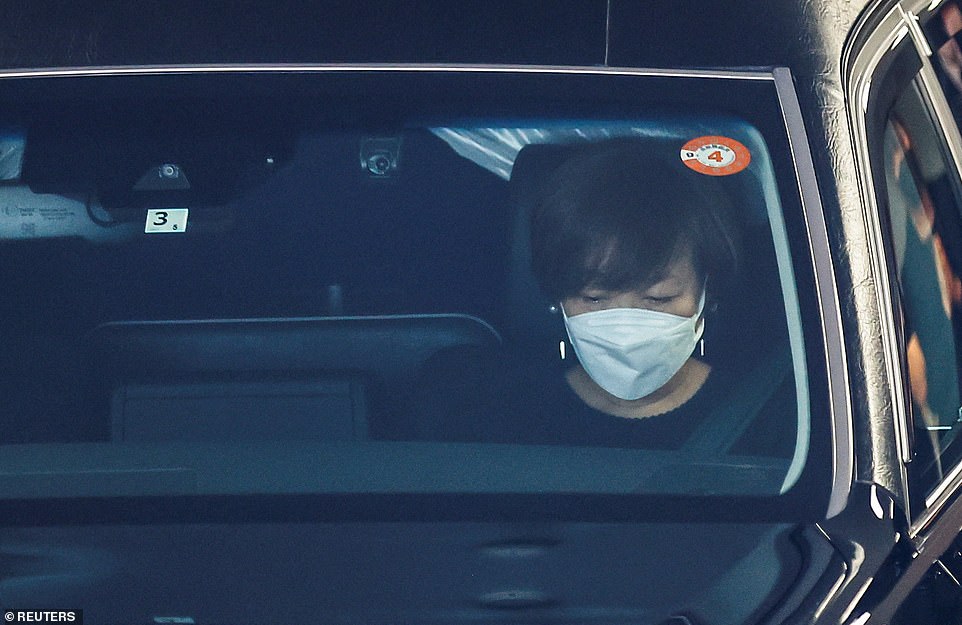 Akie, who had been married to Shinzo for 35 years, appeared to have tears in her eyes as she travelled to the nearby Zojoji temple where her husband’s wake will take place today 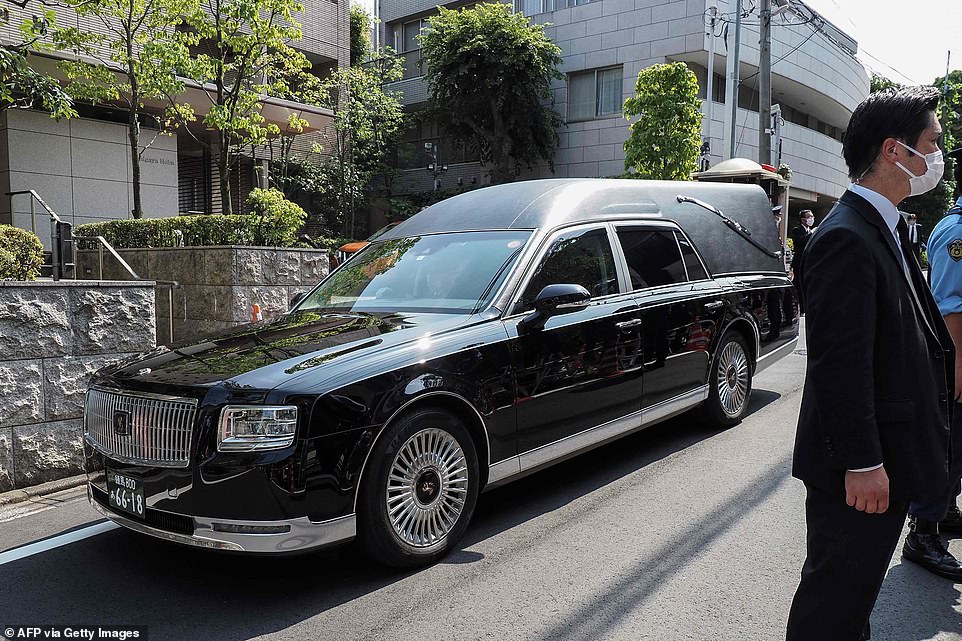 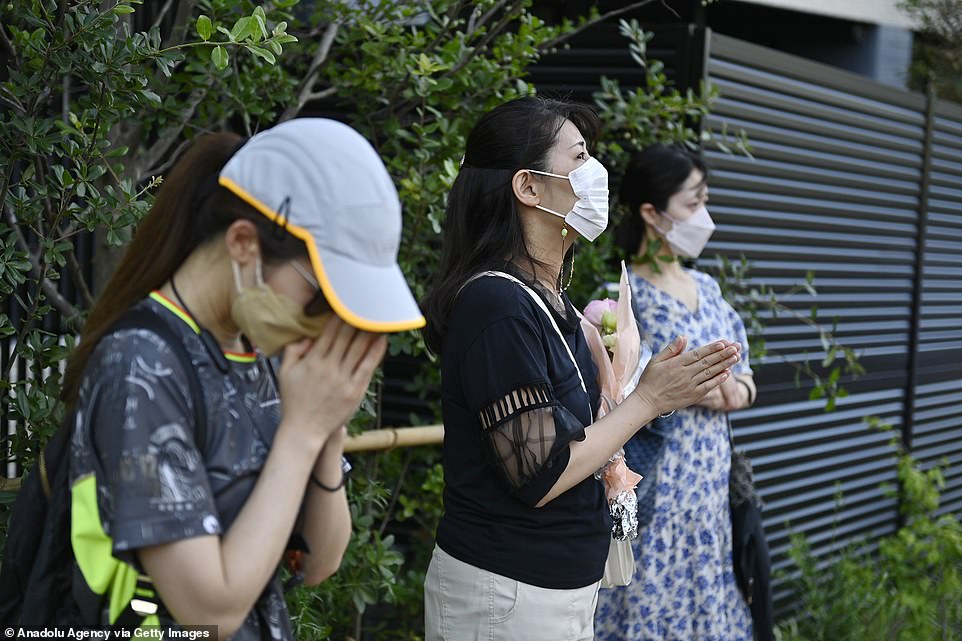 People waiting outside the Abe family home in Tokyo pray and bow their heads in a sign of respect and mourning for ex-prime minister Shinzo, after he was shot dead on Friday

The ‘tsuya’ is a traditional Japanese ceremony – akin to a wake in Western culture – which typically takes place the day before a funeral.

Invited guests – usually only close family – gather at a temple or place of worship to offer condolence money to the bereaved and say prayers for the dead.

If the deceased was a Buddhist, relatives and guests will then make incense offerings to an urn placed in front of the deceased which is meant to invoke the presence of divinities and bless the person and space.

A priest will chant a section of a sutra – akin to a prayer from one of Buddhism’s ancient texts – during the incense offerings.

Once the sutra has finished being said, most of the guests will leave but immediate relatives of the dead may stay at the temple overnight alongside the coffin.

This traditions is where the ‘tsuya’ gets its name. Literally translated, the word means: ‘Passing the night.’

Following the ‘tsuya’, Abe’s family will reconvene Tuesday for a private funeral that will also be held in the capital.

Public ceremonies are expected to be announced in due course, though no exact dates have been given.

Abe, a colossal political figure in Japan and perhaps the country’s most-important post-war leader, was giving a campaign speech when he was shot dead last week.

The former PM – who stepped down in 2020 due to health issues – was in the city of Nara to back his party’s local candidate when he was killed.

Tetsuya Yamagami, 41, fired two shots from a home-made shotgun to kill Abe, the second of which struck him in the neck and chest causing fatal blood loss.

Yamagami was arrested at the scene and has since told police he targeted Abe because he believed the politician is linked to the Unification Church.

He said his mother is also part of the church – known to some as a cult – and had bankrupted the family making donations to its leaders.

Yamagami has confessed to the shooting, and is being held in custody while police gather evidence about the attack.

Meanwhile Japan’s election went ahead as scheduled on Sunday despite fears of copy-cat attacks, with Abe’s party handed a parliamentary super-majority.

It means that sweeping reforms of the country’s constitution – a long-time goal of Abe’s that he was unable to realise before stepping down – are now a possibility. 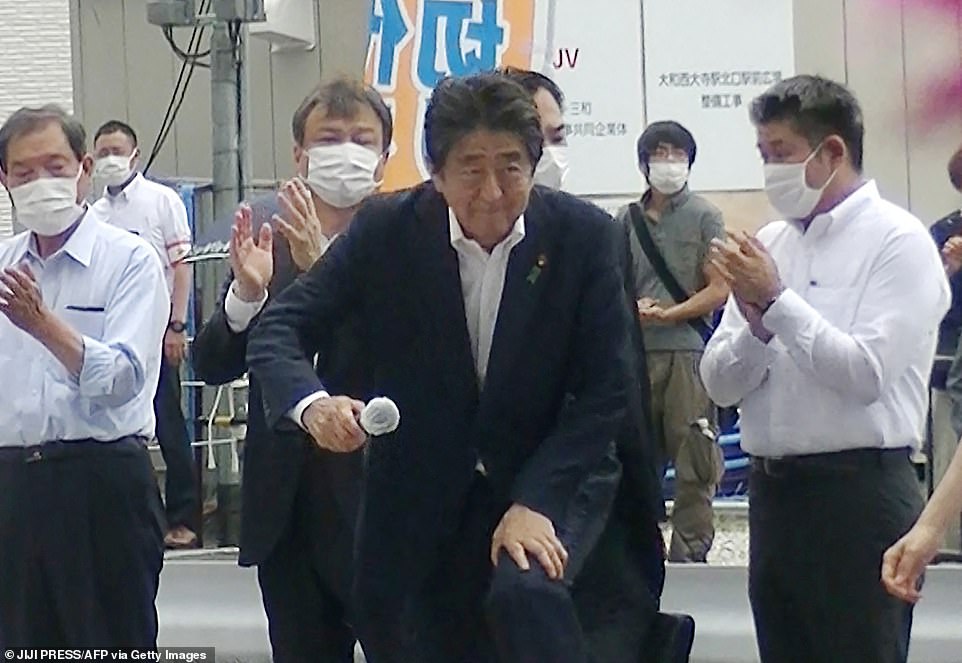 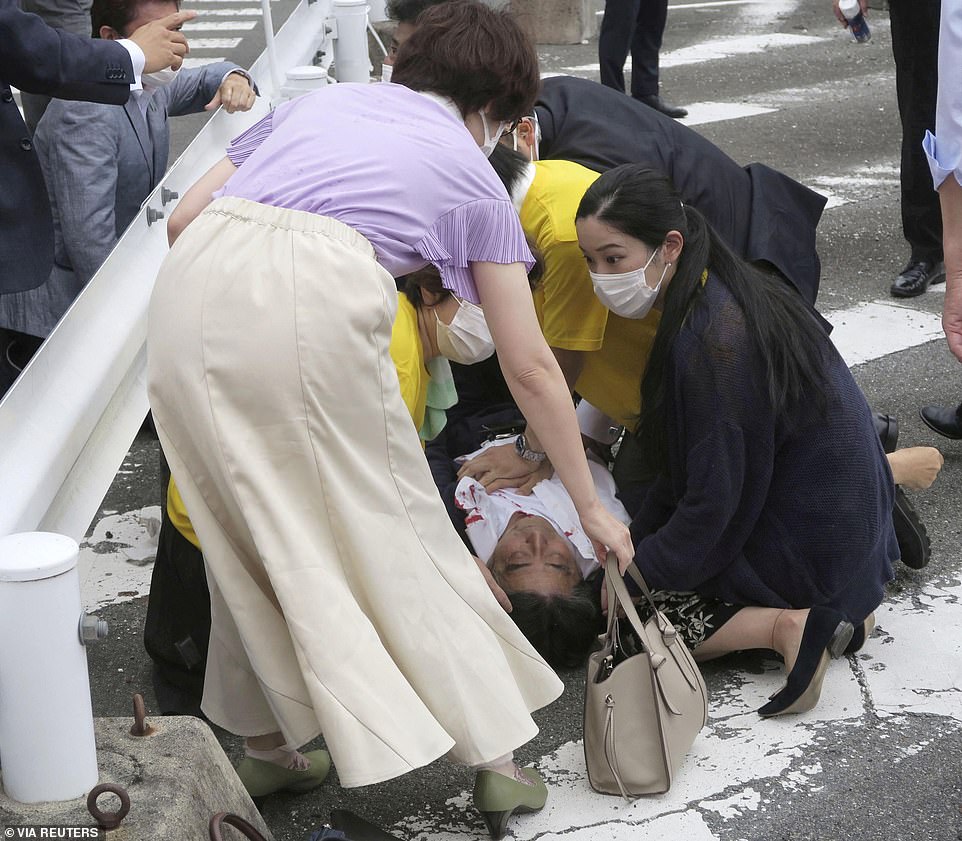 Mr Abe was hit in the neck and chest by the second of two shots, suffering massive blood loss. He was rushed to hospital but was pronounced dead five hours after the shooting 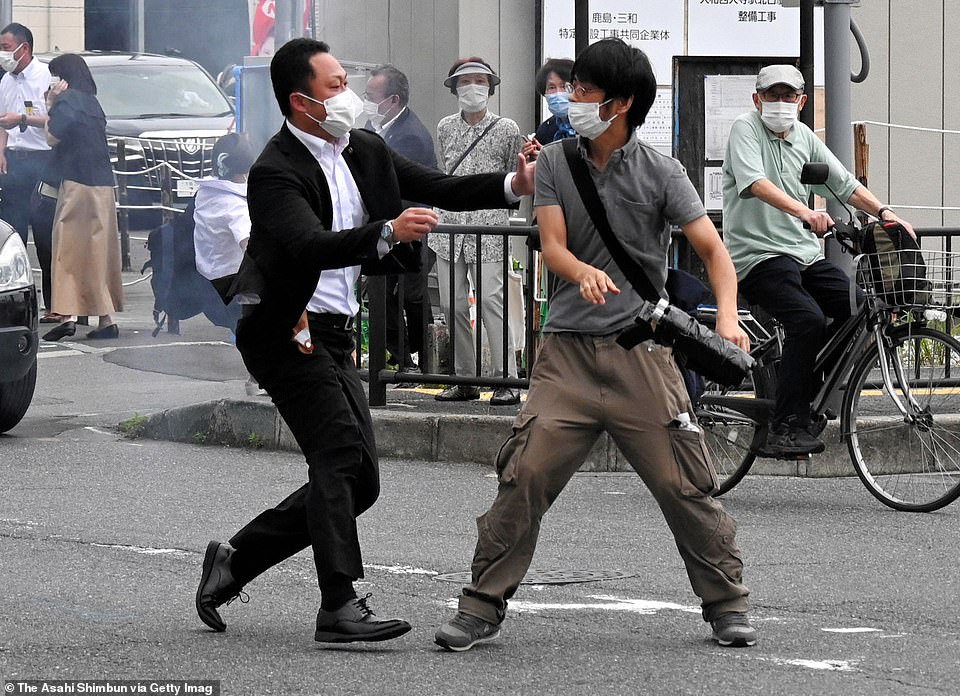 Yamagami, 41, a veteran of Japan’s armed forces (pictured with his home-made shotgun), has admitted the shooting and said he attacked Abe because he believed he was associated with a church that had bankrupted his family

Prime Minister Fumio Kishida stands to rule without interruption until a scheduled election in 2025.

That would allow Kishida to work on long-term policies such as national security, his signature but still vague ‘new capitalism’ economic policy, and his party’s long-cherished goal to amend the U.S.-drafted postwar pacifist constitution.

Kishida welcomed the major win but wasn’t smiling, given the loss of Abe and the hard task of unifying his party without him. In media interviews late Sunday, Kishida repeated: ‘Party unity is more important than anything else.’

He said responses to COVID-19, Russia’s invasion of Ukraine and rising prices will be his priorities. He said he will also steadily push for reinforcing Japan’s national security as well a constitutional amendment.

Kishida and senior party lawmakers observed a moment of silence for Abe at the party election headquarters before placing on the whiteboard victory ribbons next to the names of candidates who secured their seats.