Shocking moment pet owner catches dog walker on camera STEALING purse, jewelry and coat from her apartment before she sounds an alarm, sparking panic from the thief

A dog walker was caught on surveillance video stealing her client’s belongings and ignoring her animals, says the pet owner, who watched the theft in progress and sounded an alarm.

The piercing siren interrupts the dog walker as she is seen in the footage stuffing an expensive winter coat into a bag.

After she pauses, the dog walker is seen frantically returning the coat to a closet and then leaving the pet owner’s apartment as her dogs watch helplessly. 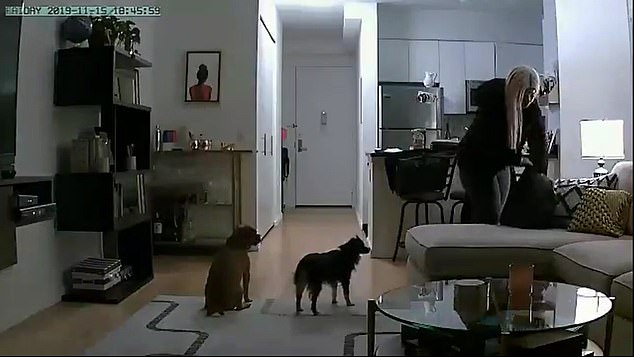 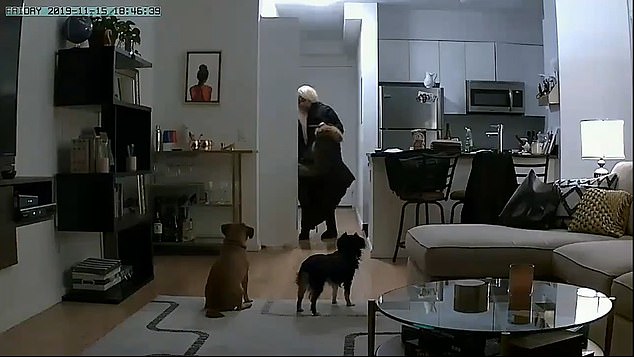 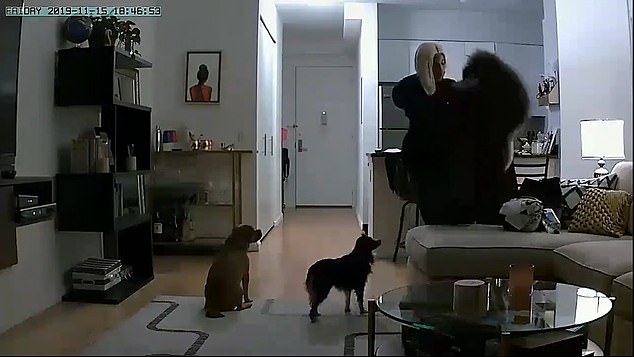 A piercing siren interrupts the dog walker as she is stuffing the coat into a bag. She returns coat and runs away, leaving the animals off leash

Shayna Bryan, the pet owner who lives in New York, tweeted about the incident on Thursday after she was dissatisfied with what she said was a lack of response from the dog walker’s employer, Wag!, an app-based company.

Bryan claims she reached out to Wag! three times about the incident before contacting police and providing investigators the video.

‘I am writing this public letter to express my extreme disappointment in the lack of regard given to the recent situation in which your @WagWalking employee’s priority was not to walk my dogs but rather to steal from my home’, a furious Bryan wrote.

Wag!, she says, finally responded after the video went viral. 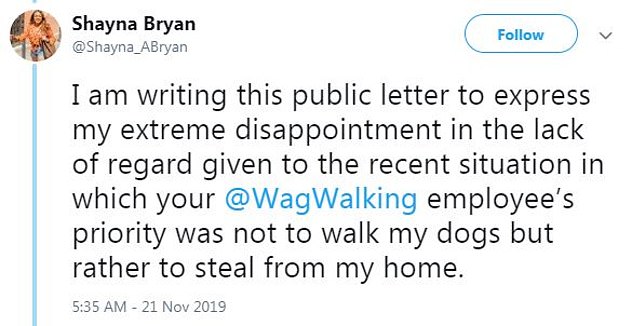 Bryan said she tweeted about the incident because she was dissatisfied with what she said was a lack of response from the dog walker’s employer, Wag!, an app-based company. 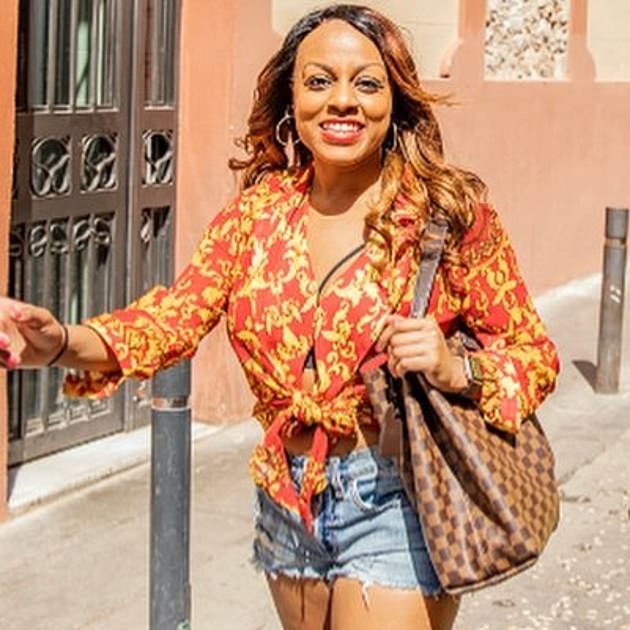 Bryan claims she reached out to Wag! three times about the incident before contacting police and providing investigators the video

Heather Rothenberg, the company’s vice president of ‘Trust and Safety and Corporate Affairs, told People that ‘in the rare case of an incident, we work directly with the pet parent and the appropriate authorities to address the situation’.

In Bryan’s case, Wag! ‘reached out to the pet parent to offer support’ as soon as the company learned of the theft, Rothenberg says in a statement to People.

‘We continue to work with directly with the local authorities on the investigation’, wrote Rothenberg to the news outlet.

She says Bryan had her money refunded and that dog walker, who is an independent contractor, was booted from the app-based service.

Wag!, like other app-based firms, including Uber and Lyft, relies on independent contractors to deliver its services and claims to vet the hires.

‘Our screenings include an application and verification process, as well as a background  check that includes Social Security number trace, a facial recognition check against all official documents provided, a document check, a national criminal check, a country criminal check, a sex offender check, and a global watch list check’, Rothenberg explained to People.

Contractors employed by Wag! also need to pass an online test covering ‘dog safety equipment, and handling knowledge’,  before they are allowed on the app’s platform.

Bryan tweeted that she had been ‘faithfully’ using Wag! for more than three years and expected the company to have responded to her with a greater ‘sense of urgency’, but that instead there was ‘little to no support’.

‘I have never felt so utterly violated’, she tweeted, posting the video footage three more times on Twitter.

Bryan tweeted that she had been ‘faithfully’ using Wag! for more than three years and expected the company to have responded to her with a greater ‘sense of urgency’, but that instead there was ‘little to no support’

Her subsequent tweets say that it was ‘disheartening’ that her ‘several attempts to garner empathy and support’ from the company resulted in her going public.

‘While your website boasts ‘vetted and background checked dog walkers’, the camera I installed last week shows otherwise. It shows your employee stealing my handbag and attempting to steal my winter coat. (Jewelry and other items were noted in the police report.)’ she tweets, explaining how the incident unfolded.

In the video, the dog walker is seen right after she entered the apartment, where Bryan’s harnessed dogs are waiting patiently to be walked.

The dog walker is then seen in rummaging through Bryan’s belongings and stuffing items into a bag.

Bryan’s dog sit off to the side watching the woman.

She then freezes as soon as the alarm goes off while she is attempting to steal Bryan’s coat.

Bryan says she enabled the microphone on her surveillance app and ordered the dog walker to return her belongings.

‘I immediately sounded my alarm and demanded she take my handbag out of her bag, which she ignored and quickly left the apartment. This recap, as you know, is captured in full on video. @WagWalking’, she wrote on Twitter.

Bryan’s voice can be heard in one of the video segments she posted, but is inaudible.

Bryan complained on Twitter how the dog walker failed to even put her animals back on their leashes before she left the apartment, ‘leaving them vulnerable to running off, getting hurt or worse’.

‘She completely compromised their safety. I can’t stop thinking about all of the worst case scenarios that may have manifested’. 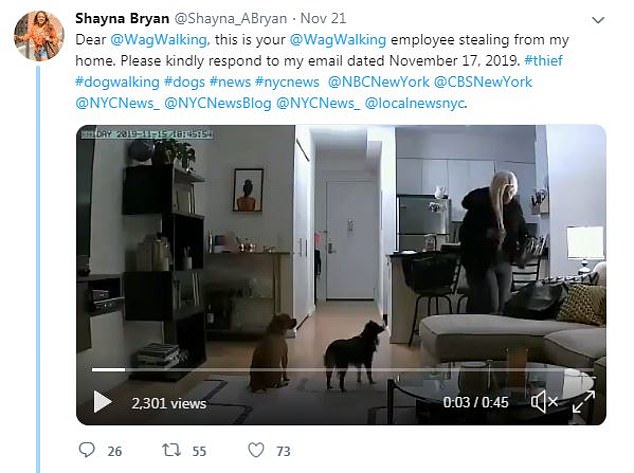 Bryan says that Wag! finally responded to the theft after her post of the surveillance video went viral. Her original tweet is pictured